Scallops are important animal protein source for humans (Liu et al., 2007; Tan et al., 2019). The global scallop landings have increased remarkably in the past decades (Food and Agriculture Organisation (FAO), 2020). The main reason for the dramatic increase in production is the development of scallop farming operations in Japan and China (Bourne, 2000; Tan et al., 2020b). The noble scallop, Chlamys nobilis, is an economically important bivalve species that naturally inhabits the coastal waters of southern China and Japan. In China, C. nobilis was initiated farmed in the Fujian province in the 1970s and later introduced to the Guangdong and Hainan provinces (Tan et al., 2020a).

With the expansion of the scale of C. nobilis aquaculture, the mass mortality rate of farmed C. nobilis has become more prominent since 2006. The production of C. nobilis seed in the hatchery is currently poorly managed due to the lack of necessary information about the origin of broodstock and seeds. In hatcheries, broodstock are usually selected from farmed stocks (Yuan et al., 2009). It is generally believed that the reproduction of animals in small or isolated populations will result in reduced heterozygosity and inbreeding depression, as well as reduced survival rates (Reed and Frankham, 2003). To avoid those potential problems, scallop farmers usually purchase scallop seeds from various sources or use seeds produced by mixing broodstocks obtained from various sources. As a result, there are significant variations in aquaculture traits among scallops in different farms, such as growth, survival rate, and disease resistance. It is worth noting that mixing population seeds from different sources may lead to a higher levels of genetic diversity and fewer heterozygotes in the populations (Ferguson, 1995; Thai et al., 2007), which might explain the high mortalities within scallop populations (Nagashima et al., 2005).

Molecular markers are an important tool for studying population genetic and can provide useful information about genetic diversity of populations (Williams and Benzie, 1998; Azuma et al., 2008; Janson et al., 2015; Phinchongsakuldit et al., 2015), as well as understand the connectivity among populations and its adaptive potential to adapt to different environments (Petersen et al., 2010). To date, genetics studies on bivalves has been very limited and mainly focusing on bivalve species with important commercial value (Benzie and Williams, 1997; Nagashima et al., 2005; Sato et al., 2005; Song et al., 2006; Gurney-Smith et al., 2017). For C. nobilis, only information on few microsatellites (Ma and Yu, 2009a, b) and mitochondrial DNA variation in farmed and wild stocks of C. nobilis in southern China (Yuan et al., 2009) are available. It is found that the genetic diversity of wild C. nobilis population is lower than that of farmed population from the same region in southern China, and the genetic composition of farmed C. nobilis is highly affected by hatchery operations (Yuan et al., 2009). 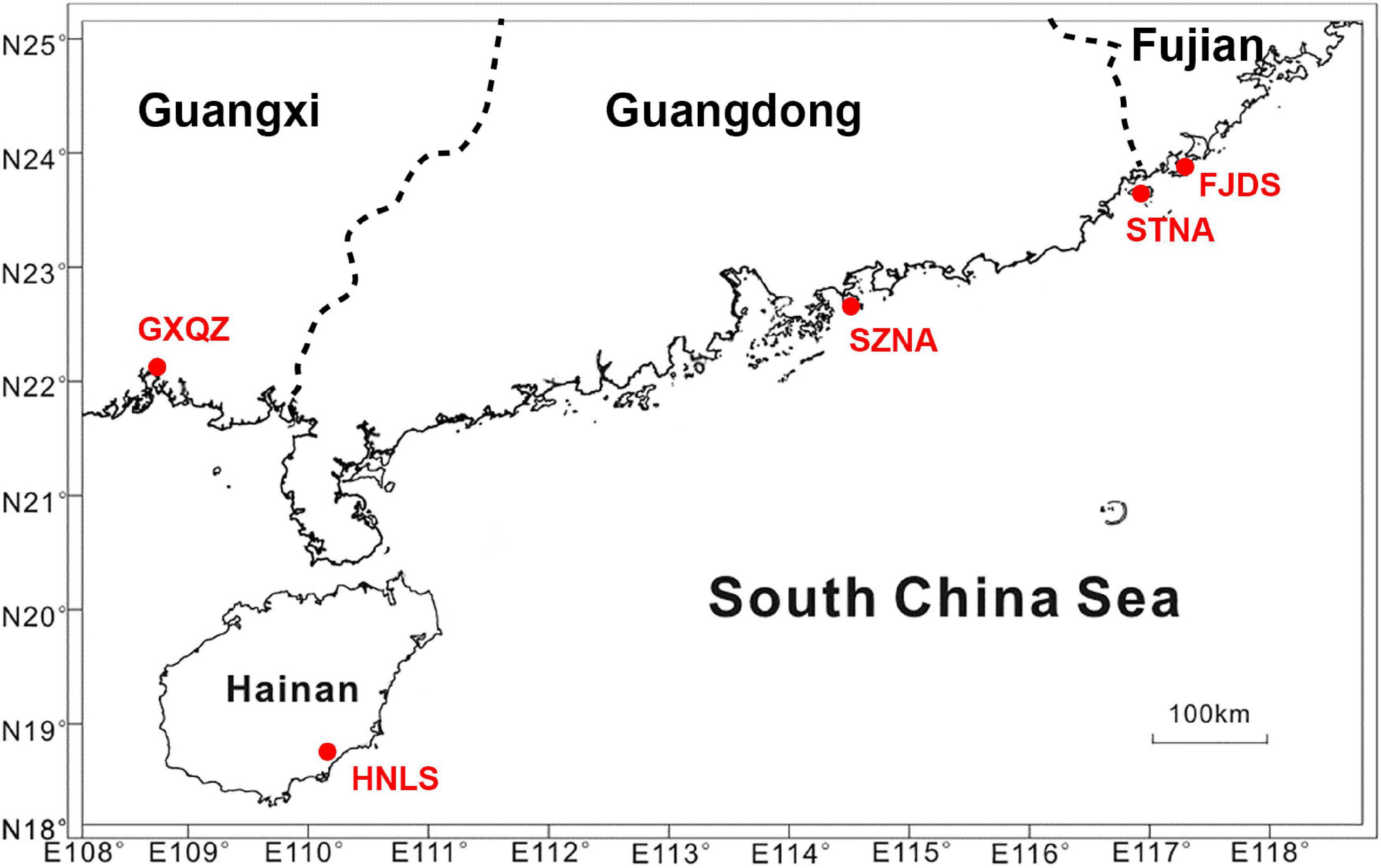 In order to avoid scoring errors, nine previously reported microsatellite loci (Ma and Yu, 2009a, b) and a newly developed microsatellite locus (Cn224) with a unique band size of were selected. The sequences of primers and microsatellite core, as well as the optimal annealing conditions are summarized in Table 1. Amplifications were conducted in 20-μL reactions (0.25–0.5 U Taq polymerase (Tiangen, Beijing, China), 80 ng of template DNA, 0.2 mM dNTPs, 1 × PCR buffer, 0.2–1 μM primers (each), and 1.0–2.0 mM MgCl2). For PCR, the initial denaturation was set at 95°C for 5 min, and then at 94°C for 30 s for 30 cycles, followed by primer-specific annealing at 72°C for 1 min, and a final extension at 72°C for 10 min. The PCR products were then separated by electrophoresis on an 8% non-denaturing polyacrylamide gel, and then observed using silver staining. For allele size determination, each gel contains a control DNA sample and a 50-bp DNA ladder (Takara).

In order to identify the scoring errors, invalid alleles, and large-allele drop out in microsatellite products, MICRO-CHECHER was used according to the manufacturing instructions (Oosterhout et al., 2004). For the analysis of microsatellite loci variation in the five populations, POPGENE 1.31 software was use to calculate the number of alleles, allele frequency, effective number of alleles, as well as expected and observed heterozygosities (Yeh et al., 1999). Locus polymorphism [polymorphism information content (PIC)] and allelic richness (R) were estimated according to the formula described by Botstein et al. (1980) and was calculated (EIMousadik and Petit, 1996), respectively. An independent T-test was performed, followed by a Turkey multiple comparison test (Turkey HSD) to test for significant differences in genetic diversity between C. nobilis from hatchery and wild populations.

GENEPOP4.0 was used to evaluate the statistical significance of Hardy–Weinberg equilibrium (HWE) and linkage disequilibrium test (LD) (Raymond and Rousset, 1995). Chi-square tests were used to test for significant differences, while sequential Bonferroni correction was used to adjust the significance of p values for multiple tests (Rice, 1989).

In order to evaluate individual migrant events across ocean currents, GENECLASS 2.0 was used to estimate the probability of each individual being assigned to a particular population based on multilocus genotype data (Piry et al., 2004).

Principal component analysis (PCA) between populations was performed using NTSYS software (Rohlf, 2005). To evaluate the genetic relationships among populations, POPULATION was used to calculate A matrix of pairwise DA distance (Nei, 1972), and then a UPGMA dendrogram was constructed using PHYLIP3.5c (Felsenstein, 1993). 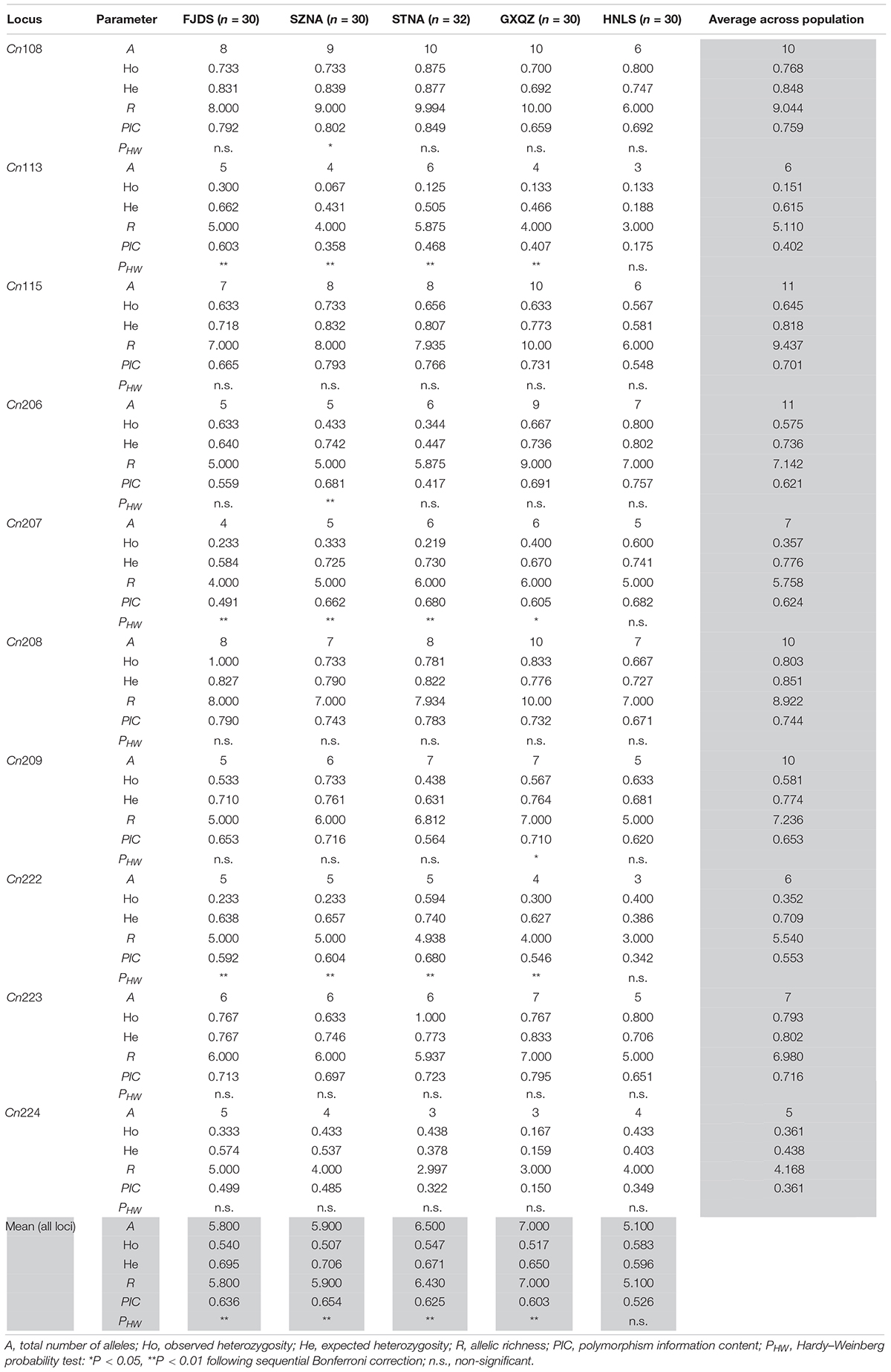 Genetic Differentiation and Relationships Among Populations

Bayesian assignment placed all wild individuals in their own population with a score of 100. However, farmed populations suffered a relatively high proportion of misclassifications (Table 5).

Table 5. Results of assignment tests based on the Bayesian method for 10 microsatellite loci of C. nobilis individuals.

Genetic relationships between populations were graphically illustrated by a dendrogram (Figure 3) and PCA (Figure 4). The UPGMA dendrogram showed that four farmed C. nobilis populations were clustered together and the wild population (HNLS) formed another cluster. Similar findings were observed in the PCA scatter plots where two major groups can be seen (i.e., FJDS-GXQZ and HNLS). 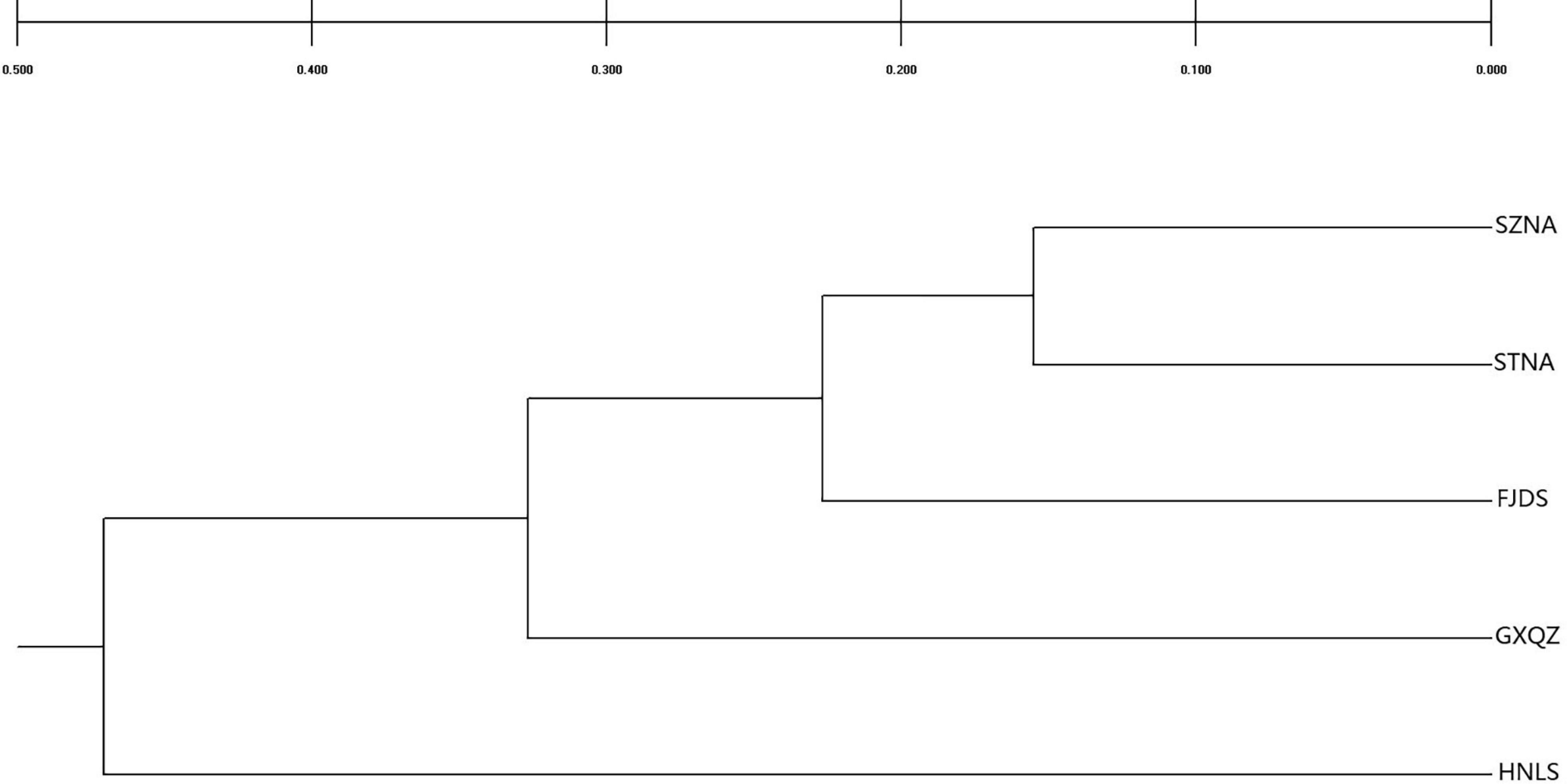 Figure 3. UPGMA dendrogram showing the phylogenetic relationships among five samples of C. nobilis, based on a matrix of genetic distance (Nei, 1972). Bootstrap values are given for nodes at least 62% or more support.

Figure 4. Principal component analysis plotting the relationships of C. nobilis populations, based on a matrix of genetic distance (Nei, 1972).

Maintaining genetic diversity is important for both wild and farmed populations as it offers genotypes that respond adaptively to changing environments (Fisher, 1958); in particular, heterozygous individuals are often superior to homozygous individuals in many aquaculture traits, including growth, fertility, and disease resistance (Thai et al., 2007). In aquaculture, as a result of limited broodstock and inbreeding activities, many shellfish species have reduced genetic variability compared to their wild stocks (Hedgecock and Sly, 1990; Evans et al., 2004; Li et al., 2007). In this study, we found that a high level of genetic diversity was maintained in the wild C. nobilis population (HNLS). However, the most genetic parameters (except Ho) of farmed C. nobilis populations were significantly higher than wild C. nobilis population. In agreement with the findings of Yuan et al. (2009) that based on mitochondrial 16S rRNA and COI genes, the farmed population of C. nobilis has a higher genetic diversity index than the wild population. In addition, similar observations have also been documented in other marine organisms, such as Salvelinus alpinus (Primmer et al., 1999) and Salmo salar L. (Elliott and Reilly, 2003).

The highest mean heterozygosity observed across all loci was in the wild population (HNLS) compared to all hatchery populations and was nearly identical to its mean expected heterozygosity because the wild population was in HWE. However, all examined farmed populations showed significant deviations from Hardy–Weinberg equilibrium. These deviations were mainly caused by heterozygote deficiency. In farmed C. nobilis populations, heterozygote deficiency is typically considered to be caused by a limited number broodstock and/or, inbreeding (Kohlmann et al., 2005; An et al., 2011). In our case, the significant deviations from HWE in hatchery populations were caused by genetic admixture. Accordingly, others have also observed high proportions of deviation from HWE in previous studies of C. nobilis (Hui et al., 2006).

Bayesian assignment test showed that the genetic admixture was significant and widespread in artificial breeding of C. nobilis. In this study, individuals from the wild C. nobilis population form a single genetic group, which suggests that the wild population in Lingshui, Hainan province did not mixed with other populations. Therefore, more attention should be paid to its protection.

Recently, the reduction of wild scallop resources has led to an increase in the transfer of seed and stock for aquaculture. Contradict with previous reports (Yuan et al., 2009), our data revealed that due to genetic admixture, the genetic diversity of farmed C. nobilis populations is higher than that of the wild population. Although the four farmed C. nobilis populations still have considerable genetic variation, heterozygote deficiency and significant genetic differentiation populations were detected. Therefore, in order to achieve sustainable development of C. nobilis aquaculture and hatchery seed production, it is important that hatcheries to maintain an effective population sizes and avoid the breeding of closely related broodstock.

YHZ and ZY conceived the study. HM and DY carried out the field and laboratory work, participated in the data analysis, and drafted the manuscript. SX and YQ collected the noble scallop populations. YZ and JL contributed to the microsatellite analysis. All authors approved the manuscript for publication.

Wright, S. (1978). Evoulution And The Genetics Of Populations, Vol Iv: Variability Within And Among Natural Populations. Chicago: University of Chicago Press.

Copyright © 2021 Ma, Yu, Xiao, Qin, Zhang, Li, Zhang and Yu. This is an open-access article distributed under the terms of the Creative Commons Attribution License (CC BY). The use, distribution or reproduction in other forums is permitted, provided the original author(s) and the copyright owner(s) are credited and that the original publication in this journal is cited, in accordance with accepted academic practice. No use, distribution or reproduction is permitted which does not comply with these terms.