Keratins, a family of intermediate filament proteins, are essential for maintaining the structural stability and integrity of keratinocytes and protecting epithelial cells from damage (4). Currently, 54 functional keratins have been identified and are classified as type I or type II based on their pH (5). Keratin 17 (K17), a type I Keratin, is mainly expressed in stem cells of the skin appendages, embryonic ectodermand endocervical mucus or reserve cells in the epithelium (6). Under physiological and pathological conditions, K17 expression can be rapidly induced. For instance, the expression levels of K17 are increased during the early stage of human skin injury, and its high expression is of great benefit to wound healing (7). Recent evidence suggests that K17 is upregulated in various types of tumors, including oral cancer, non-small cell lung cancer, basal cell carcinoma and cervical cancer, and when overexpressed, K17 acts as an oncogene (8–11). In addition, previous studies have demonstrated that K17 mRNA is highly expressed in pancreatic ductal adenocarcinoma (PDAC) (12, 13). Roa-Peña et al. (14) demonstrated that increased K17 expression is associated with shorter survival of patients with PDAC. However, the role of K17 in pancreatic cancer has not yet been reported.

Tumor tissues were collected from 94 pancreatic cancer patients who underwent curative surgery from September 2004 to December 2008 at the Second Affiliated Hospital of Chongqing Medical University. This study was approved by the Research Ethics Committee of the Second Affiliated Hospital of Chongqing Medical University (China). In addition, informed consent was obtained from all patients prior to surgery. All patients who had previously received chemotherapy or radiotherapy were excluded. Clinical and pathological information was collected and is listed in Table 1. The overall survival of patients data was acquired at 2-month intervals through telephone calls. The follow-up data stopped being collected in December 2011.

To analyze cell growth, colony formation assays were performed. SW1990, CFPAC-1, HPDE6-C7 and PANC-1 cells were seeded in 6-well plates at a density of 500 cells/well and then were incubated for 14 d. Subsequently, 0.05%crystal violet was used to stainfor 20 min. Cell colonies were counted using a light microscopy.

The cell cycle distribution was measured by propidium iodide (PI) staining. The cells were harvested and washed with cold PBS. Next, the cells were fixed by incubation with 70% ice cold ethanol at 4°C overnight. After washing in cold PBS, the cells were resuspended in 100 μg/ml RNase and then were stained with 50 μg/ ml PI (Sigma-Aldrich, St. Louis, MO, USA) for 30 min at 4°Cin the dark. Finally, the cells were analyzed using a flow cytometry (Becton Dickinson, Franklin Lakes, NJ, USA).

For cell migration assays, SW1990, CFPAC-1, HPDE6-C7 and PANC-1 cells were seeded in 12-well plates at a density of 2 × 105 cells/well and then were incubated for 24 h. When the cells reached 90% confluence, sterile pipette tips were used to scratch a wound on the surface of the confluent cell monolayer. The speed of wound closure was monitored after 48 h by measuring the distance of the wound from 0 h.

For cell invasion assay, Matrigel-coated Transwell cell culture chambers (BD Biosciences, Bedford, MA, USA) with membrane pore size of 8.0 μm (Corning, Tewksbury, MA, USA) were used. A total of 5 × 104 cells in 100 μl of serum-free medium were added to each insert, and 500 μl of medium with 10% FBS was added to the lower chambers. After 48 h of incubation, cells on the upper side of the filter were removed, and those that invaded through the filter into the lower side of the membrane were fixed and stained with crystal violet. The number of cells that invaded was calculated under a microscope.

SW1990, CFPAC-1, HPDE6-C7 and PANC-1 cells were isolated and plated on round coverslips. After 24 h of incubation, cells were washed with PBS and fixed in 4% paraformaldehyde for 15 min. After washing, cells were permeabilized with 0.2% Triton X-100 for 10 min. Subsequently, cells were blocked with 5% normal goat serum for 30 min. Next, a rabbit polyclonal E-cadherin antibody (20874-1-AP, ProteinTech Group, Inc., Wuhan, China) and a rabbit polyclonal Vimentin antibody (10366-1-AP, ProteinTech Group, Inc., Wuhan, China) were added to slides, and they were incubated overnight at 4°C. Slides were washed with PBS, which were followed by incubation with Alexa Fluor® 555-conjugated secondary antibodies for 30 min at 37°C. Finally, cell nuclei were stained using DAPI. Images were obtained using a microscope with a digital camera (Olympus, Tokyo, Japan).

To assess the function of K17 in vivo, stable K17-silenced SW1990 cells (LV-K17 RNAi, 1 × 106 cells in 100 μl of sterilized PBS) and stable scramble control SW1990 cells (LV-NC, 1 × 106 cells in 100 μl of sterilized PBS) were injected into the left and right dorsal flanks of 4–weeks-old BALB/c male nude mice (Animal Center of the Chinese Academy of Science, Shanghai, China), respectively. Tumor sizes (length and width) were measured every week using calipers. Tumor volume was calculated as follows: tumor volume = (length × width2)/2. After 5 weeks, the mice were executed humanely, and the tumors were resected and photographed. This study was approved by the Research Ethics Committee of the Second Affiliated Hospital of Chongqing Medical University (China).

To determine the expression of K17 mRNA in pancreatic cancer, we analyzed a GEO cDNA microarray database (series GSE62452) (Figure 1A) (18). As shown in Figure 1A, K17mRNA expression was markedly higher in pancreatic cancer samples than it was in adjacent normal tissues (P < 0.001). In addition, the results from the GEPIA database showed that the expression of K17mRNA was upregulated in pancreatic cancer samples compared that of normal tissues (P < 0.05, Figure 1B), and a high K17 mRNA level was significantly correlated with worse overall survival (P = 0.036, Figure 1C) (19). Moreover, Kaplan-Meier plots summarizing the results from the Human Protein Atlas (www.proteinatlas.org/) showed that patients with high K17 mRNA levels hah shorter overall survival (P = 0.0079, Figure 1D) (20). 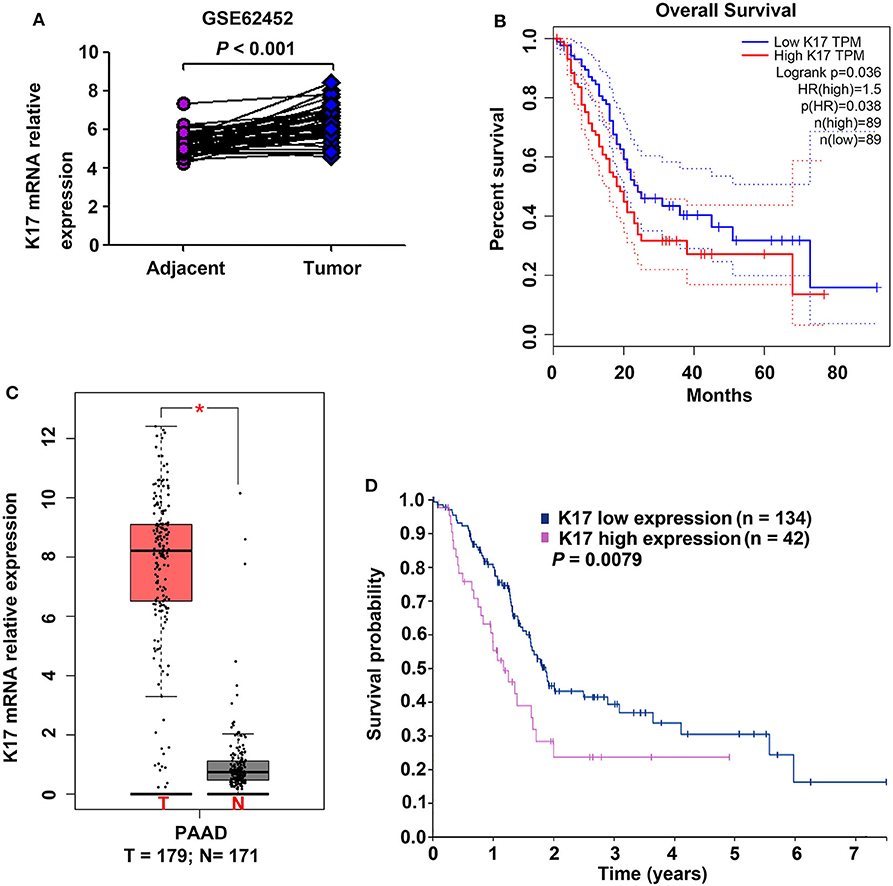 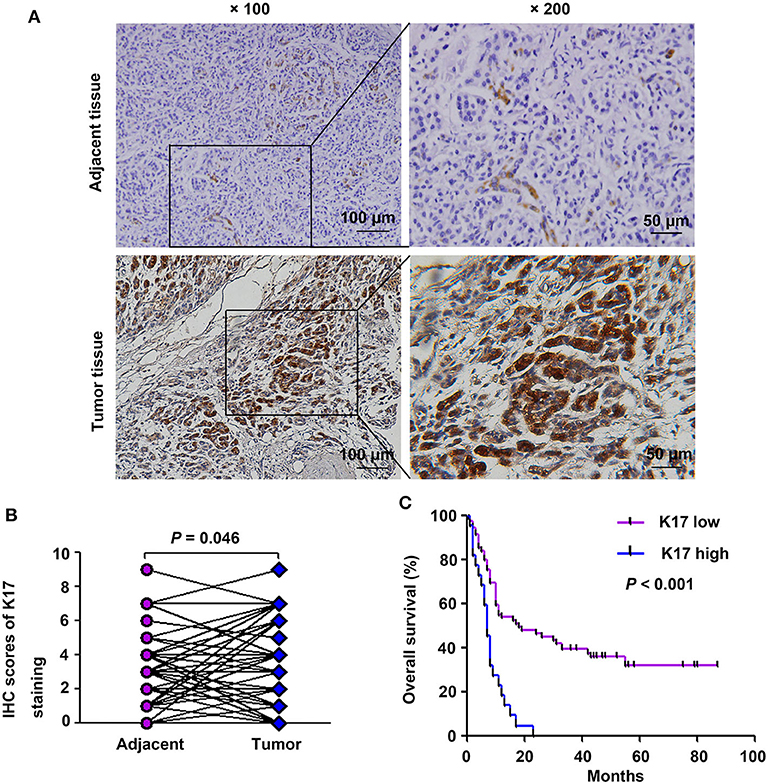 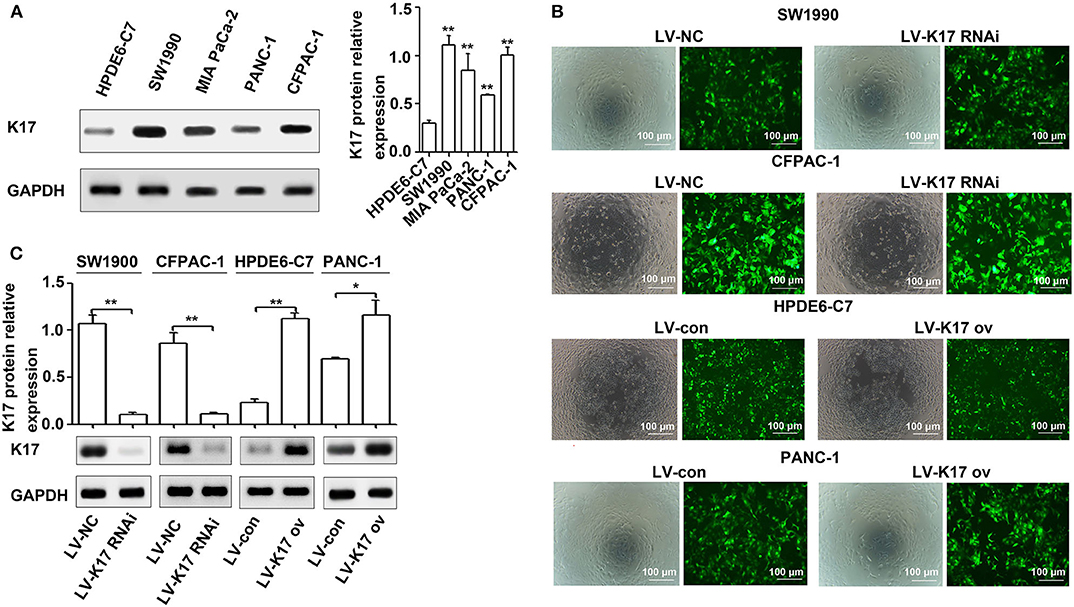 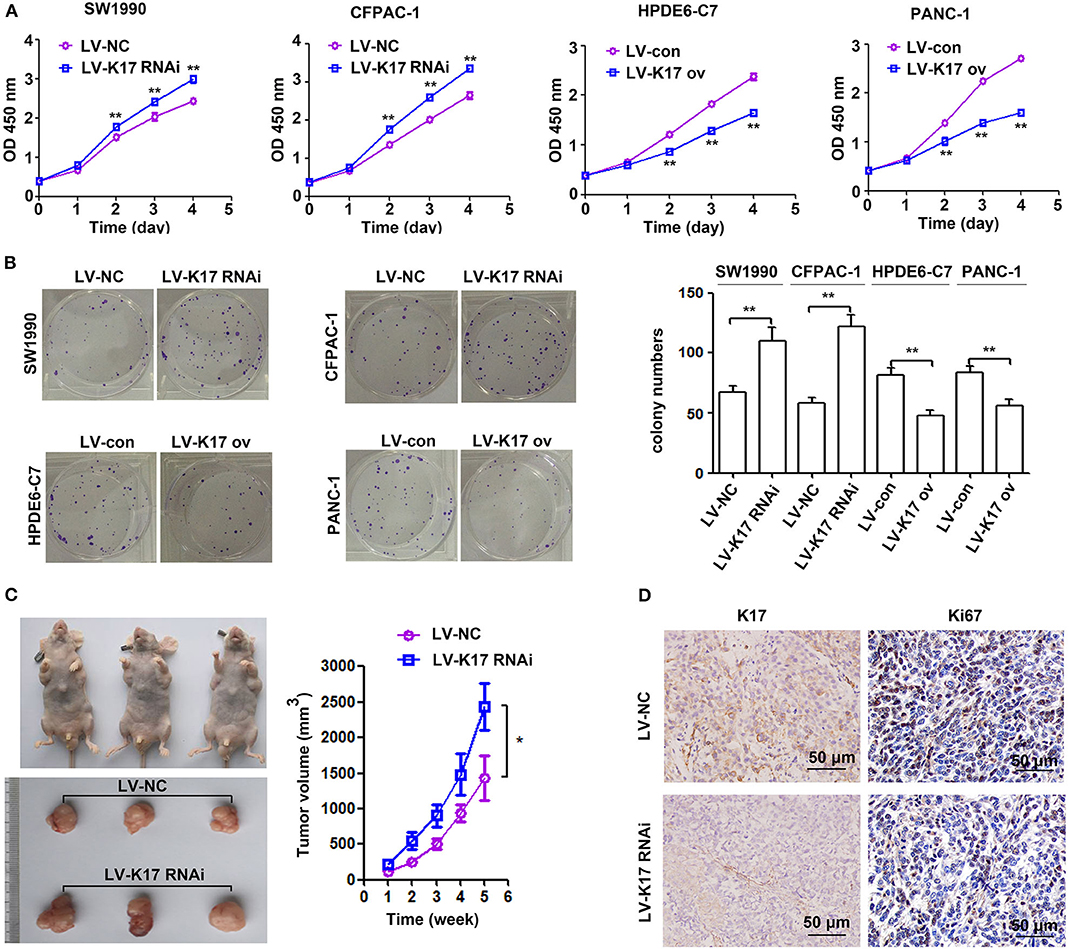 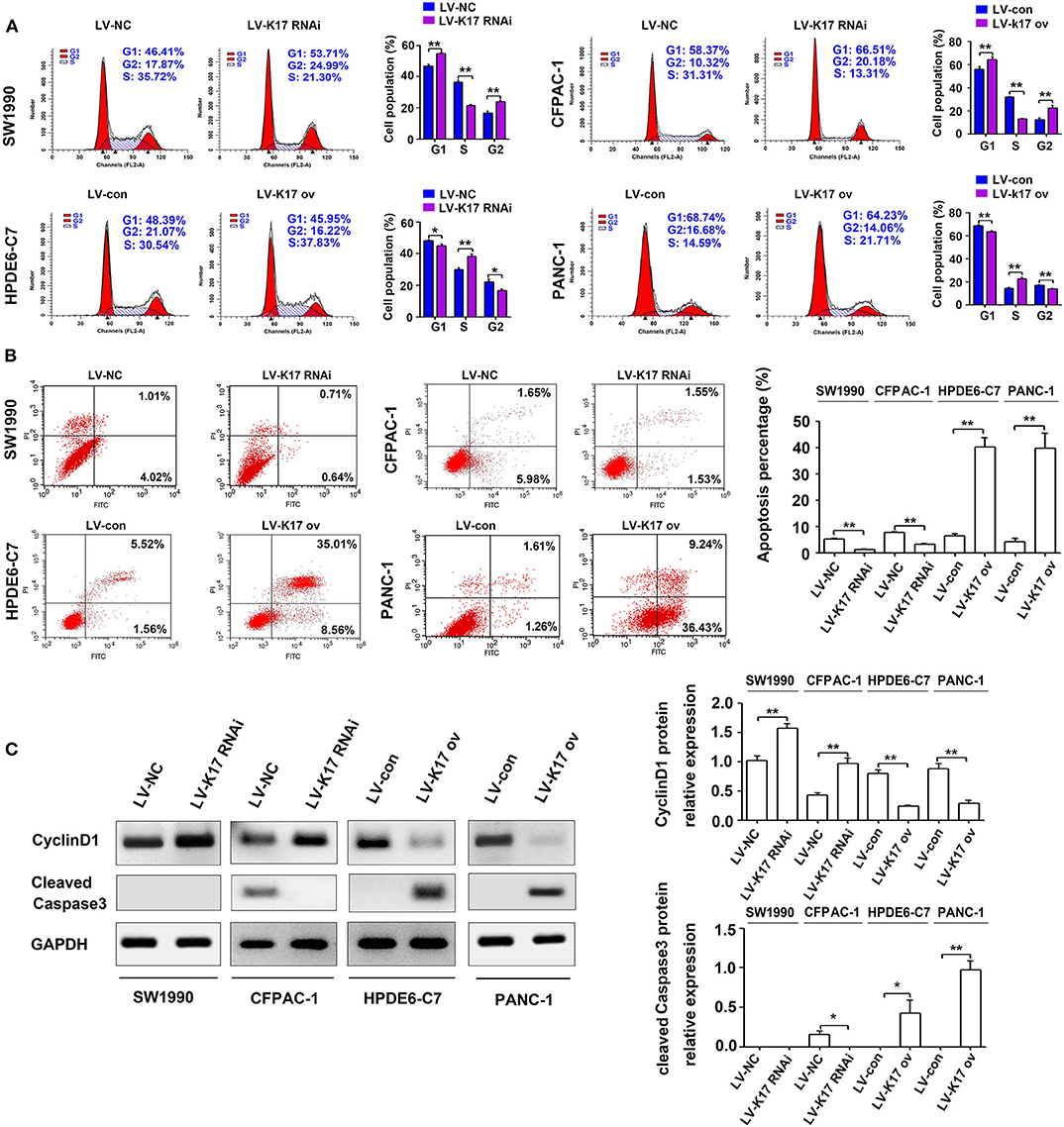 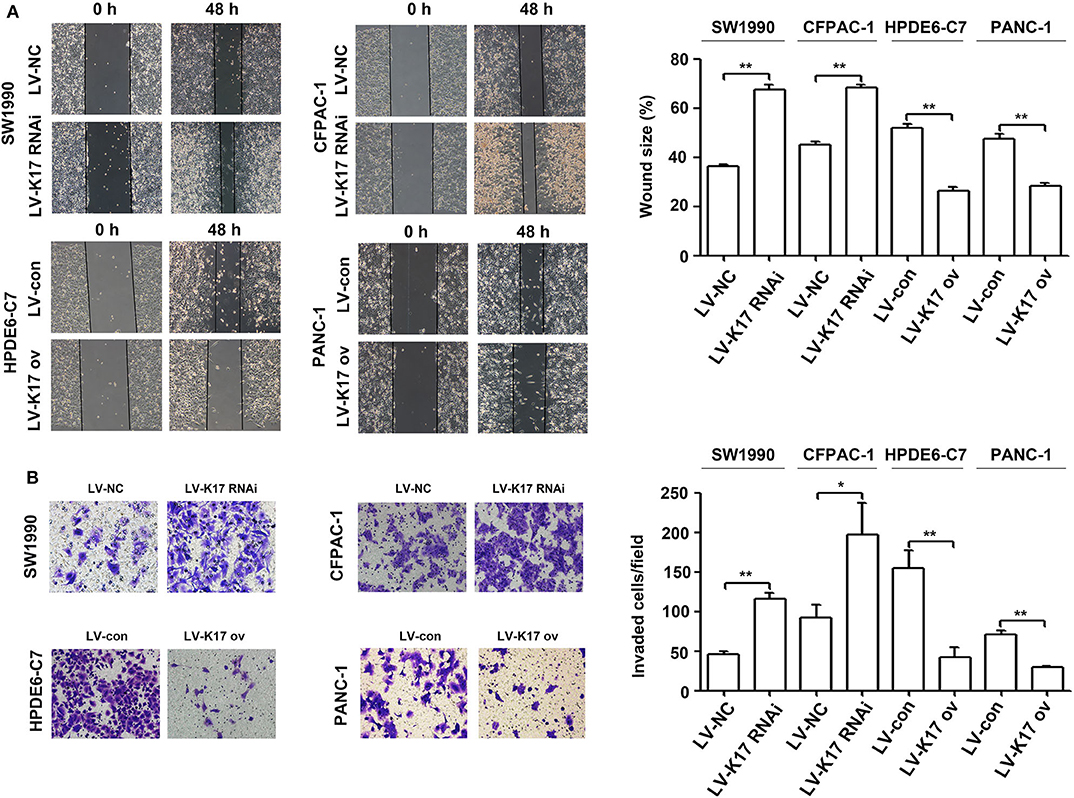 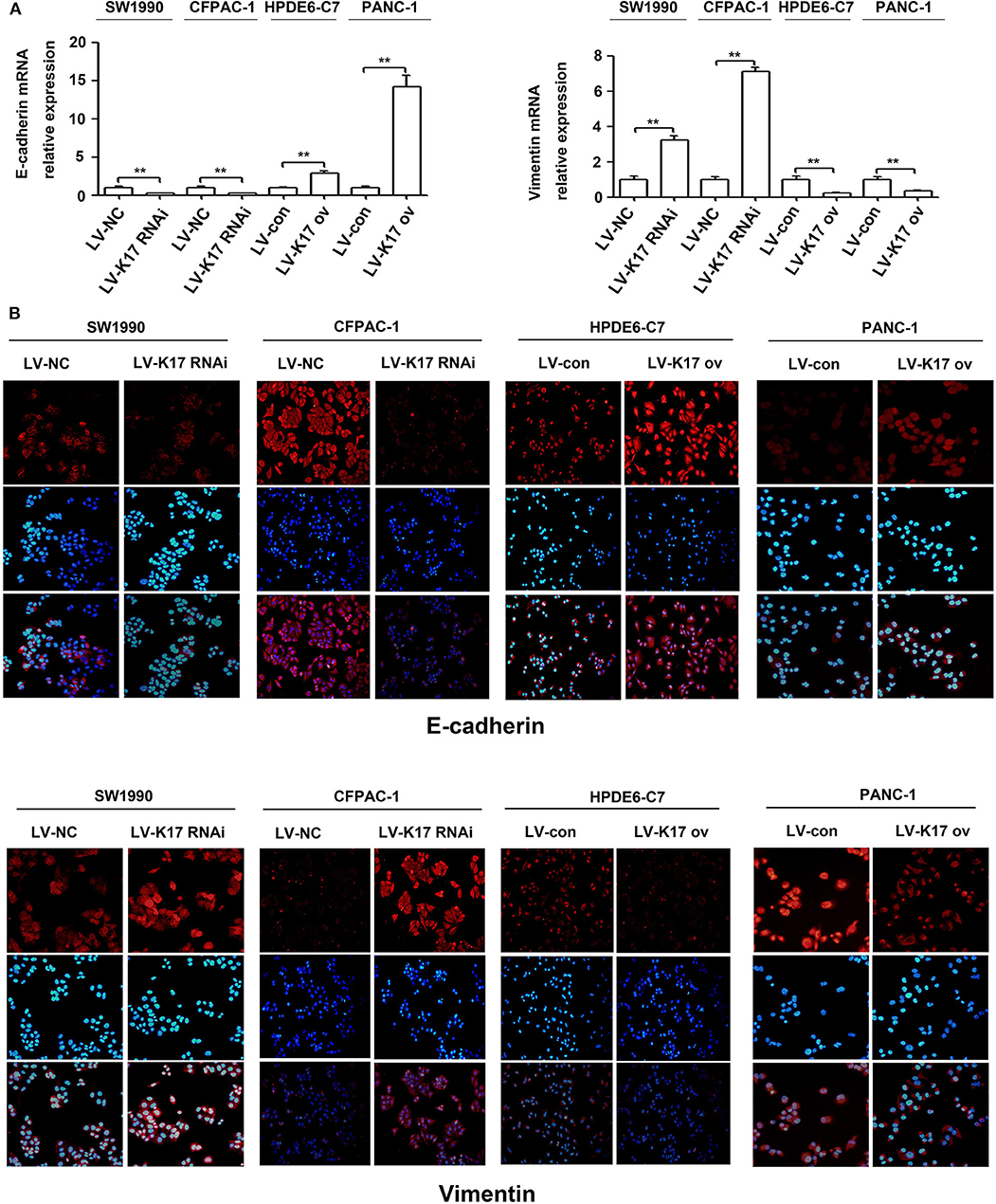 Previous studies have revealed that K17 promotes tumor progression in numerous cancer types, including gastric cancer, non-small cell lung cancer, oral squamous cell carcinomas and Ewing sarcoma (8, 9, 22–25). For example, K17 induced tumor growth and invasion in gastric cancer (22). In oral cancer, K17 induced cell proliferation and migration by stimulating the Akt/mTOR pathway and promoting glucose uptake (8). In addition, K17 was involved in GLI-mediated oncogenic transformation and cellular adhesion in Ewing sarcoma (25). In non-small cell lung cancer, K17 promoted cell proliferation, invasion and EMT (9). Thus, these findings imply that K17 has an oncogenic role in tumor progression. Based on recent reports and our above results, we hypothesize that K17 functions as an oncogene in pancreatic cancer. In contrast, our functional studies first showed that K17 knockdown induced pancreatic cancer cell proliferation and colony formation (Figures 4A,B). However, K17 upregulation inhibited pancreatic cancer cell proliferation and colony formation (Figures 4A,B). Next, to determine whether the suppression of cell proliferation was due to the inhibition of the cell cycle or the increased apoptosis by K17, cell cycle and apoptosis assays were performed in vitro (Figure 5). Our results showed that knocking down K17 accelerated the cell cycle and decreased cell apoptosis, while K17 overexpression caused cell cycle arrest and cell apoptosis (Figure 5). Meanwhile, we also found that knocking down K17 induced pancreatic cancer cell migration and invasion, while overexpressing K17 repressed cell migration and invasion (Figure 6). EMT, a well-characterized embryological process, is one of the mechanisms by which cancer cells acquire metastatic potential through gaining enhanced mobility and invasiveness (26, 27). Our results showed that K17 knockdown induced EMT through reducing E-cadherin expression and increasing Vimentin expression (Figure 7). However, K17 upregulation repressed EMT through increasing E-cadherin expression and decreasing Vimentin expression (Figure 7). Thus, the anti-migration and invasion function of K17 may be mediated by suppressing EMT. These results suggested that elevated K17 may play a tumor suppressor function in pancreatic cancer.

It has been reported that several tumor suppressors are overexpressed in cancer (28, 29). For example, p16lnk4a was upregulated in many human tumors and functioned as a tumor suppressor (28). Accumulating evidence shows that oncogene-induced senescence can occur in response to oncogenic insults and is considered an important tumor suppressor mechanism (30). Interestingly, p16lnk4a-mediated senescent-like arrest was reported in response to oncogenic Ras mediated stimulation in normal primary cells (31). In addition, p16lnk4a was upregulated in human naevi, and elevated p16lnk4a was involved in senescence-associated growth arrest, protecting the cell from malignant transformation (32, 33). This pattern of p16Ink4a overexpression suggests that p16Ink4a inhibition is the main step in bypassing senescence. Montes et al. (33) found that p16 lnk4a was mutated or homozygously deleted in ~40% of melanoma cases. However, we found that K17 was upregulated in pancreatic cancer when compared with matched adjacent normal pancreatic tissues. Thus, our results suggest that other mechanisms are needed to induce K17 upregulation in pancreatic cancer. A recent study showed that oncogene was also downregulated in cancer (34). Ma et al. (34) found that carbonic anhydrase-related protein VIII (CA8) was downregulated in renal cell carcinoma and that CA8 upregulation induced cell proliferation and migration. Thus, we speculate that the low expression or loss of activity of oncogenes such as CA8 is one of the reasons for the high expression of tumor suppressor genes such as K17, GATA4 and p16lnk4a.

All datasets presented in this study are included in the article/Supplementary Material.

The studies involving human participants were reviewed and approved by the Research Ethics Committee of the Second Affiliated Hospital of Chongqing Medical University (China). The patients/participants provided their written informed consent to participate in this study.

YZ, MZ, and YY performed research and wrote the first draft. JG collected and analyzed the data. YY is the guarantor. All authors contributed to the design and interpretation of the study and to further drafts.

The Supplementary Material for this article can be found online at: https://www.frontiersin.org/articles/10.3389/fmed.2020.572494/full#supplementary-material

Copyright © 2020 Zeng, Zou, Liu, Que, Wang, Liu, Gong and You. This is an open-access article distributed under the terms of the Creative Commons Attribution License (CC BY). The use, distribution or reproduction in other forums is permitted, provided the original author(s) and the copyright owner(s) are credited and that the original publication in this journal is cited, in accordance with accepted academic practice. No use, distribution or reproduction is permitted which does not comply with these terms.