Objectives: Interstitial lung disease (ILD) is an extra-articular manifestation in rheumatoid arthritis (RA), detected in 10.7% of patients, and causing a poor prognosis. Hence, biomarkers for ILD are urgently required in RA. Low molecular weight metabolites can be assessed by metabolomic analyses, and although these have been conducted in RA and in idiopathic pulmonary fibrosis, few have been carried out for ILD in the context of RA. Therefore, we analyzed serum metabolomic profiles of ILD in RA to identify novel biomarkers.

Results: A total of 299 metabolites were detected in the metabolomic analysis. By univariate analysis, serum levels of decanoic acid and morpholine were lower in RA with ILD (false discovery rate Q = 1.87 × 10−11 and 7.09 × 10−6, respectively), and glycerol was higher (Q = 1.20 × 10−6), relative to RA without CLD. Serum levels of these metabolites in RA with usual interstitial pneumonia or RA with non-specific interstitial pneumonia were also altered. The partial least squares-discriminant analysis model generated from these three metabolites could successfully discriminate ILD in RA (area under the curve: 0.919, 95% confidence interval: 0.867–0.968, sensitivity 0.880, specificity 0.780).

Conclusions: Serum levels of some metabolites were significantly different in RA with ILD compared with RA without CLD. It is concluded that metabolomic profiling will be useful for discovering candidate screening biomarkers for ILD in RA.

Rheumatoid arthritis (RA) is a systemic autoimmune disease affecting synovial joints, but extra-articular manifestations are also observed. These include interstitial lung disease (ILD), characterized by interstitial inflammation of the lung, in 10.7% of patients (1). ILD predicts a poor prognosis in RA (2). Krebs von den lungen-6 (KL-6) and surfactant protein-D (SP-D) have been used as biomarkers for ILD. However, their cutoff levels were higher for their application to RA-associated ILD (RA-ILD), and their sensitivity is insufficient (3). Many studies of ILD markers have been reported in idiopathic pulmonary fibrosis, but few have been validated for RA-ILD. Thus, biomarkers for ILD in RA patients are needed.

Low molecular weight metabolites are commonly analyzed to elucidate altered metabolisms in pathological conditions. Systematic investigations of metabolic pathways and low molecular weight compounds have mostly been conducted to clarify the pathogenesis of cancer and to generate cancer biomarkers (4). Some metabolomic analyses were also conducted separately in RA (5) or idiopathic pulmonary fibrosis (6–8) but rarely for RA-ILD. Here, we analyzed serum metabolomic profiles of ILD in RA to generate novel biomarkers for RA-ILD.

Characteristics of the RA Patients

PLS-DA was conducted to generate potential biomarkers for ILD in RA (Figure 1A). ILD in RA was successfully discriminated by component 1, for which VIP scores were calculated (Supplementary Table 2). Three metabolites with VIP scores >3.5 (decanoic acid, glycerol, morpholine) were selected to develop new biomarkers for ILD in RA. ROC curves of these three metabolites were generated, and AUC values were calculated [Supplementary Figure 2, decanoic acid: AUC 0.800, 95% confidence interval [CI] 0.747–0.858, glycerol: AUC 0.772, 95% CI 0.711–0.829, morpholine: AUC 0.660, 95% CI 0.615–0.705]. A PLS-DA model was created with these three metabolites, and a ROC curve of the PLS-DA was generated with an AUC of 0.919 (95% CI 0.867–0.968) (Figure 1B). The average accuracy based on 100 cross-validations was 0.838, and a permutation test was carried out (Permutation P = 1.72 × 10−5). The optimized condition estimated from the ROC curve provided a sensitivity of 0.880 and specificity of 0.780 (Supplementary Figure 3). Since the prevalence of ILD in RA in our previous study was 0.107 (1), positive and negative predictive values of the created biomarker model were calculated to be 0.331 and 0.981, respectively. The impact of ILD in RA on metabolic pathways was validated, and glycerolipid metabolism, fatty acid biosynthesis, and galactose metabolism were shown to be influenced by ILD in RA (Figure 1C). Thus, the PLS-DA model with the three metabolites generated the candidate screening biomarker with high sensitivity, and it can be concluded that some metabolic pathways were influenced by ILD in RA. 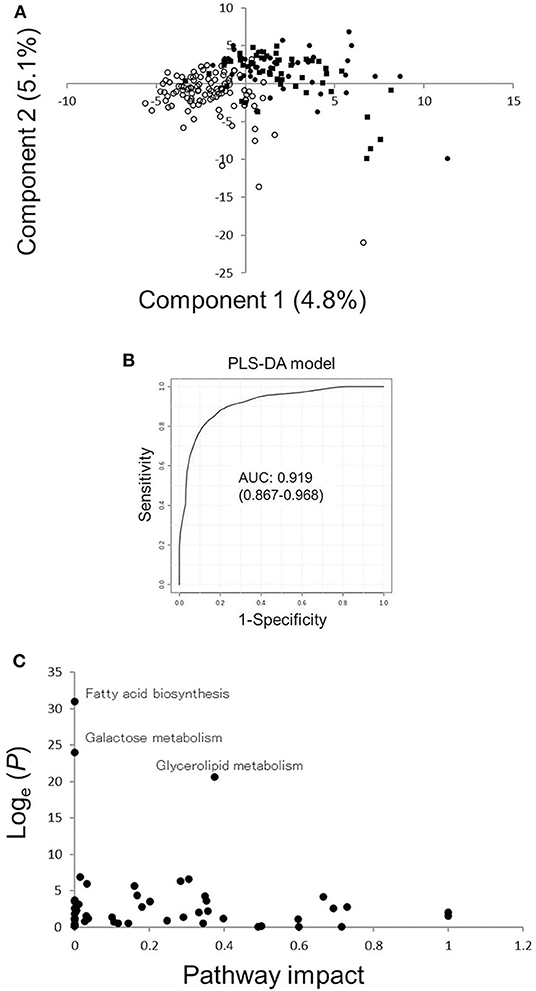 The development of a single biomarker for the diagnosis of multifactorial diseases would be difficult, although metabolomic biomarkers have been explored in this context over the years. In the present study, serum levels of some metabolites including decanoic acid, glycerol, and morpholine were found to be different in RA patients with or without ILD. Different levels of three metabolites in the serum were confirmed in both UIP-associated RA and NSIP-associated RA. PLS-DA was also used for the generation of robust complex markers of RA-ILD with these three metabolites compared with current ILD markers. Altered lipid metabolism has been explored in the pathogenesis of RA-ILD, as was also reported in idiopathic pulmonary fibrosis (6, 8). Plasma decanoic acid and octanoic acid levels were reported to increase after Roux-en-Y gastric bypass surgery in insulin-resistant patients (16). Because diabetes mellitus is a risk factor for idiopathic pulmonary fibrosis (17), our results could be explained by altered carbohydrate metabolism in the pathogenesis of ILD. Additionally, serum decanoic acid levels were decreased, and glycerol levels were increased in rats gavaged with paraquat, which causes ILD (18), suggesting common mechanisms in RA-ILD and paraquat-induced ILD. Decanoic acid and octanoic acid levels have also been reported to be increased in colorectal cancer patient sera and breast cancer tissues (19, 20). Serum decanoic acid levels were increased in lupus nephritis as well (21), suggesting the presence of contrasting metabolic conditions in cancer or inflammation compared with RA-ILD. Although altered levels of glycerol have been reported in metabolomic analyses in several diseases (22), few studies have noted altered morpholine levels. The different profiles of these metabolites in RA with or without ILD would reflect the altered glycerolipid metabolism in ILD. However, it is difficult to investigate causality, because no animal model for RA-ILD has been established.

Lung metabolomic analyses were performed in idiopathic pulmonary fibrosis patients (6–8). An apparent difference of metabolomic profiles was observed in these studies. Serum metabolomic analyses were also conducted in RA (5), and obviously, different metabolomic profiles were reported. Profiles of some metabolites were significantly different between ILD(+)RA and CLD(–)RA, but the number of the metabolites with significant differences between ILD(+)RA and CLD(–)RA seemed to be smaller than the difference between idiopathic pulmonary fibrosis patients and healthy controls or RA and healthy controls. The comparison with healthy controls might reveal relatively larger differences, and the comparison between disease subsets could only show the essential differences.

Although the sample size of the present study is modest, the results obtained from UIP-associated RA were replicated in NSIP-associated RA. Nevertheless, independent larger scale studies are necessary to replicate the results obtained from the present preliminary study. Metabolomic profiles in other potential controls, such as idiopathic pulmonary fibrosis patients, RA patients with emphysema or airway diseases, or healthy controls, were not compared with RA-ILD in the present study. In future studies, these comparisons should be performed to discriminate RA-ILD from other conditions. Although cases and controls were matched for age, sex, and the use of corticosteroids and disease-modifying antirheumatic drugs in this study, the serum metabolite levels might be influenced by other unmatched factors including disease duration of ILD, comorbidities, disease activity score in 28 joints, health assessment questionnaire disability index, or drug dosage or duration. The effect sizes of these factors would be clarified in future studies. Nonetheless, to the best of our knowledge, this is the first metabolomic analysis to discriminate RA-ILD from RA without lung disease. Thus, the results of univariate analyses showed significantly different serum levels of some metabolites (decanoic acid, glycerol, morpholine) in RA patients with ILD relative to those without lung disease. Additionally, PLS-DA analyses provided candidate screening biomarkers for RA-ILD generated from these three metabolites and offer better sensitivity (0.880) than current biomarkers for ILD. Metabolomic profiling would be useful to generate better biomarkers for ILD in RA.

The studies involving human participants were reviewed and approved by the NHO Central Institutional Review Board. The patients/participants provided their written informed consent to participate in this study.

This work was supported by Grants-in-Aid for Clinical Research from the National Hospital Organization.

The Supplementary Material for this article can be found online at: https://www.frontiersin.org/articles/10.3389/fmed.2020.599794/full#supplementary-material

Copyright © 2020 Furukawa, Oka, Shimada, Okamoto, Hashimoto, Komiya, Saisho, Yoshikawa, Katayama, Matsui, Fukui, Migita and Tohma. This is an open-access article distributed under the terms of the Creative Commons Attribution License (CC BY). The use, distribution or reproduction in other forums is permitted, provided the original author(s) and the copyright owner(s) are credited and that the original publication in this journal is cited, in accordance with accepted academic practice. No use, distribution or reproduction is permitted which does not comply with these terms.