Graft Failure in Patients With Hematological Malignancies: A Successful Salvage With a Second Transplantation From a Different Haploidentical Donor

Graft failure (GF) is defined as the failure to achieve sustained engraftment following allogeneic stem cell transplantation (allo-SCT). It is a fatal complication of allo-SCT and is associated with considerable morbidity and mortality, most notably infections and hemorrhagic complications due to marrow hypoplasia. The occurrence of GF is associated with several factors, including underlying disease, human leukocyte antigen disparity, conditioning regimen, graft, cell counts, and donor-specific antibodies (DSA) (1). While the incidence of GF is <5% in general, it is more frequent in patients after haploidentical stem cell transplantation, where the incidence is around 10% in T cell-depleted modality (2), 13% in post-transplant cyclophosphamide-based T cell depleted modality (3), and 1% in the Beijing protocol (4). Although it is a rare complication, the mortality of GF is almost 100% without salvage therapy (5).

This prospective, single-arm clinical trial was performed at the Peking University Institute of Hematology, China. This study was approved by the ethics committee of Peking University People's Hospital. All patients provided written informed consent before enrollment. The study was registered as a clinical trial (ClinicalTrials.Gov: NCT03717545). The inclusion criteria were as follows: (1) diagnosis of acute leukemia, myelodysplastic syndromes, or lymphoma; (2) graft failure after the first allogeneic stem cell transplantation; and (3) signed informed consent to the current study. Patients will be excluded if with any of the following criteria: (1)uncontrolled active infection; (2)unctrolled active GVHD; (3)significance organ dysfunction: serum total bilirubin≥2ULN or serum creatine ≥1.5 upper limit of normal (ULN), or ejection fraction <50%, or symptomatic heart failure; (4)poor performance (ECOG >2); (5)expected life <28 days; (6) patient can not cooperate the treatment; (7)the physician evaluated as not suitable. From March 1, 2018 to April 30, 2020, a total of 13 patients were enrolled in this study. The last follow-up date was July 31, 2020.

Protocol for the Second Transplantation

The conditioning regimen consisted of the following agents: fludarabine (30 mg/m2/day, injected i.v.) from day−6 to day−2; cyclophosphamide (1,000 mg/m2/day, injected i.v.) on days−5 and−4. A different HID was selected for the second transplantation. The donor was administered with granulocyte colony-stimulating factor (G-CSF) 5 ug/kg/d from day−3 to the end of collection. All of the recipients except one (due to coronavirus disease, the planned bone marrow collection was canceled) were administered G-CSF-mobilized bone marrow and peripheral blood stem cells (PBSC). Bone marrow was harvested on day 1, and PBSC was harvested on day 2. Graft-vs.-host disease (GVHD) prevention consisted of basixilimab 20 mg on days −1 and + 4, plus cyclosporine A (trough concentration 150–250 ng/ml), and mycophenolate mofetil. The infection prophylaxis was based on our protocol as previously literature (4). Cytomegalovirus (CMV) and Epstein-Barr virus (EBV) were monitored twice per week using real-time polymerase chain reaction. Hematopoietic chimerism was evaluated using fluorescent in situ hybridization for sex-unmatched pairs or using the short tandem repeat technique.

Continuous variables were represented as medians, and categorical variables were represented as percentages. OS and DFS were estimated using the Kaplan–Meier method. The cumulative incidences of engraftment, GVHD, treatment-related mortality (TRM), and relapse were estimated using a competing risk model. Death and relapse without developing GVHD were treated as competing events for GVHD, whereas relapse and TRM were treated as events competing with each other. A p < 0.05 for a two-sided test was considered to be significant. The multivariate Cox proportional model and survival analysis were calculated with SPSS software (SPSS 16.0, Chicago, IL, USA). The cumulative incidence was calculated with R statistical software, version 3.6.0 (R Foundation for Statistical Computing, Vienna, Austria).

From March 1, 2018 to April 30, 2020, a total of 13 patients were enrolled in this study. The last follow-up date was July 31, 2020. Detailed information on demographic information, disease information, and first transplantation are summarized in Table 1. At the time of the first transplantation, six patients were DSA positive, among which there were four patients with mean fluorescence intensity >5,000, who were administered rituximab and received third-party cord blood (CB) transplants according to our protocol (12). 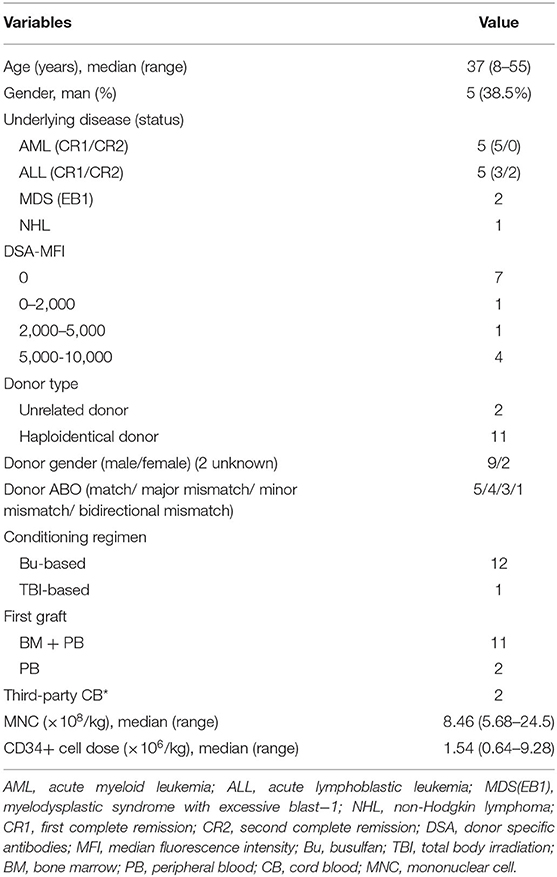 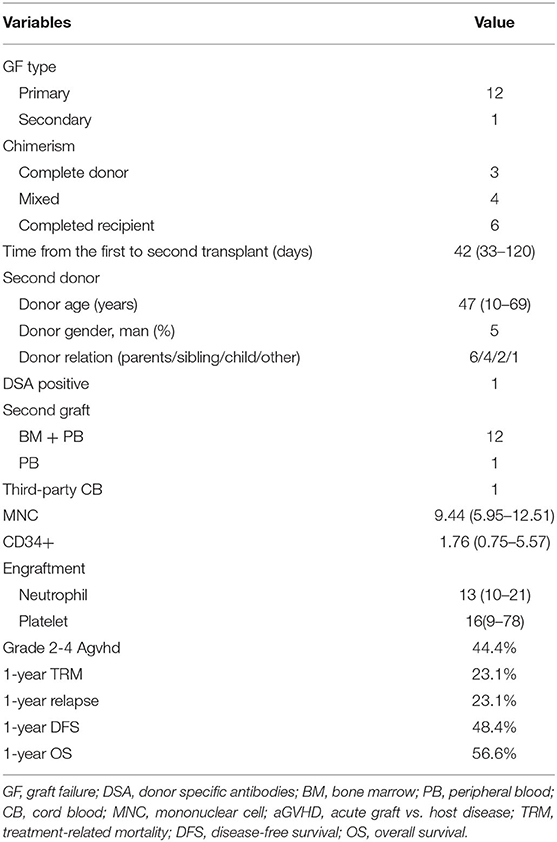 Table 2. Summary of the second transplantation.

Outcomes After the Second Transplantation

At the last follow-up, three patients relapsed at 72, 93, and 273 days after transplantation, respectively. The cumulative incidence of relapse after 1 year was 23.1%. Among the three relapses, two died without any further treatment, and one survived without disease after undergoing chimeric antigen receptor T-cell therapy. 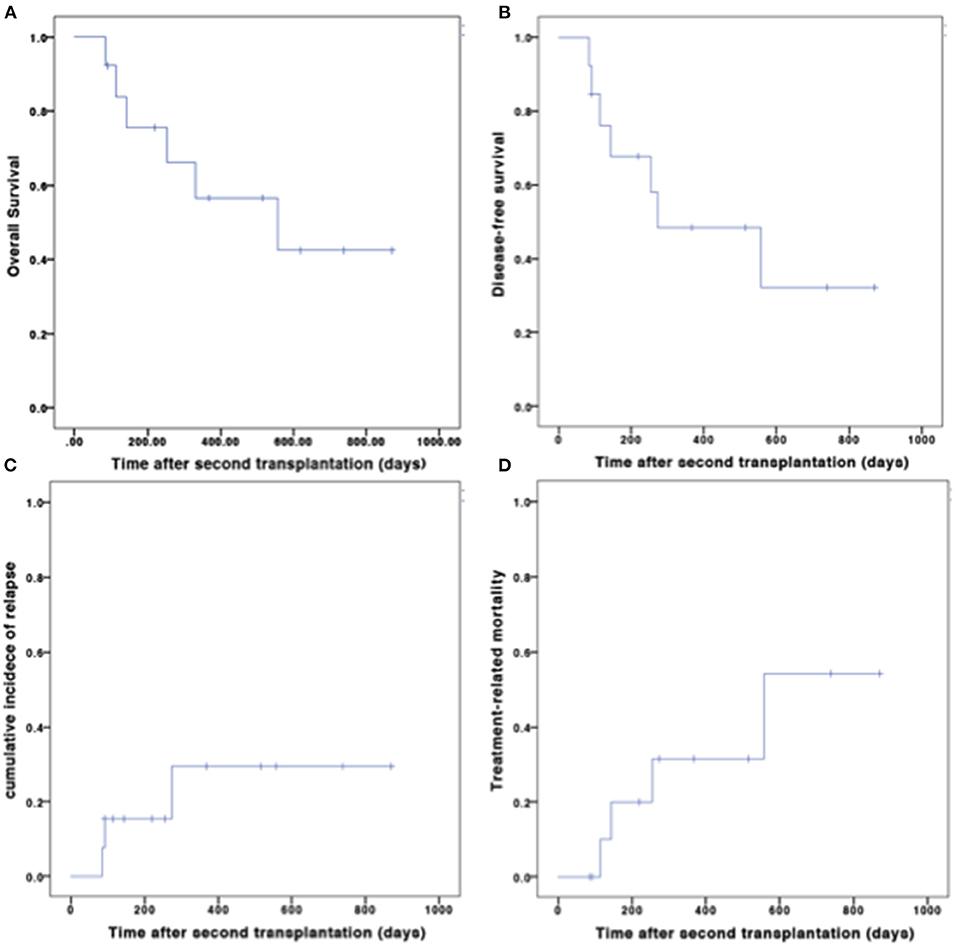 Due to the urgent need for a second transplantation in patients with GF, fast preparation of the donor is critical in clinical practice. Obviously, it is not practical to search for unrelated volunteer donors from the registry. CB and HIDs are alternative choices. A recent Japanese study demonstrated the engraftment advantage of an HID over CB (22). Beyond that, the HID has several other advantages, such as wide availability of multiple donors and sufficient cell number. Therefore, haploidentical transplantation as a salvage for GF is a promising choice.

It is encouraging that none of our patients had an early death due to regimen-related toxicity. Our conditioning regimen is less intense than the regimens used in previous reports. In addition, in our current regimen, we did not include TBI because to do so would mean leaving the protection of the laminar flow bed, increasing the risk of infection. Interestingly, although it seems to be less intense than almost all previous reports, the Flu/Cy regimen used in our study demonstrated very good performance in terms of fast engraftment. This suggests that the re-transplant conditioning regimen might not need to be so intense in the early period after the first transplantation as that might have already suppressed the recipient immune system to some extent. Our results indicate that the Flu/Cy regimen in our study meets the criteria of our previously defined optimal conditioning regimen. However, further studies are needed to confirm our preliminary encouraging results.

Although our regimen demonstrated excellent engraftment and an early safety profile, the GVHD and infection complications observed were still very high. Therefore, this protocol requires further investigation and optimization to reduce GVHD and infection which would translate into long-term survival.

In conclusion, this phase-2 prospective study demonstrated that a second transplantation with Flu/Cy conditioning from a different HID was a successful salvage for GF after first transplantation in patients with hematological malignancies.

The studies involving human participants were reviewed and approved by Peking University People's Hospital. Written informed consent to participate in this study was provided by the participants' legal guardian/next of kin.

X-JH and Y-QS designed the study and prepared the manuscript. All authors approved the final manuscript and submission.

The Supplementary Material for this article can be found online at: https://www.frontiersin.org/articles/10.3389/fmed.2021.604085/full#supplementary-material

Copyright © 2021 Sun, Wang, Wang, Yan, Cheng, Chen, Zhang, Han, Han, Suo, Xu, Zhang, Liu and Huang. This is an open-access article distributed under the terms of the Creative Commons Attribution License (CC BY). The use, distribution or reproduction in other forums is permitted, provided the original author(s) and the copyright owner(s) are credited and that the original publication in this journal is cited, in accordance with accepted academic practice. No use, distribution or reproduction is permitted which does not comply with these terms.