This study aimed to investigate the susceptibility of 8 polymorphisms in ApoB and PCSK9 genes to diabetic kidney disease (DKD) in Chinese patients with type 2 diabetes mellitus. This is a case-control association study, including 575 DKD cases and 653 controls. Genotypes were determined using ligase detection reaction method, and data are analyzed using STATA software. The genotype distributions of rs1042034 and rs12720838 differed significantly between the two groups (P < 0.001 and P = 0.008, respectively). After adjusting for confounding factors, the mutations of rs1042034 and rs12720838 were associated with the significantly increased risk of DKD. For instance, carriers of rs1042034 T allele (CT and TT genotypes) were 1.07 times more likely to have DKD than carriers of rs1042034 CC genotype [odds ratio (OR) = 1.07, 95% confidence interval (CI): 1.03–1.10, P < 0.001]. Further, haplotype T-A-G-T in ApoB gene was overrepresented in cases (18.10%) compared with controls (12.76%) (PSimulated = 0.045), and haplotype T-A-G-T was associated with a 33% increased risk of DKD (OR = 1.33, 95% CI: 1.04, 1.70). In further haplotype-phenotype analysis, significant association was only noted for hypertension and omnibus haplotypes in ApoB gene (PSimulated = 0.001). Our findings indicate that ApoB gene is a candidate gene for DKD in Chinese patients with type 2 diabetes mellitus.

As a major microvascular complication of diabetes mellitus, diabetic kidney disease (DKD) has skyrocketed to epidemic proportions. Latest statistics indicates that the age-standardized prevalence of DKD worldwide was 15.48/1,000 and 16.50/1,000 in men and women, respectively (1). Although global DKD prevalence has remained stabilized during the last three decades, the mortality rate of DKD is growing in comparison to that of other types of chronic kidney disease (2). Effective strategies should be developed to curb this global burden (3). A practical strategy is the identification of possible risk factors to potentially predict subjects who are more likely to pre-dispose to DKD, thereby helping doctors and healthcare professionals to make immediate prevention and control measures against this disease.

It is widely accepted that DKD is a complex multifactorial disease, partly under genetic control (4). Previous evidence revealed that DKD occurs in familial clusters, indicating a strong heritable component in the pathogenesis (5, 6). The results of recently completed genome-wide association studies have advanced knowledge on the genetic underpinnings of DKD (7–10). Despite much endeavors, the causal genetic determinants of DKD are not yet fully understood. As such, candidate gene approach represents an alternative strategy by focusing on the genes with strong biological or clinical implications (11). The genes encoding apolipoprotein B (ApoB) and proprotein convertase subtilisin/kexin type 9 (PCSK9) are such candidate genes for DKD. Clinical studies have shown that circulating ApoB served as an independent predictor of renal replacement therapy in DKD patients (12, 13), and PCSK9 can promote hypercholesterolemia, and PCSK9 concentrations were associated with chronic kidney disease stages (14) and lipid-lowering regimens (15). However, in the medical literature, the genetic pre-disposition of ApoB and PCSK9 genes to DKD is rarely reported.

To fill this gap in knowledge and yield more information for future research, we genotyped 5 single nucleotide polymorphisms (SNPs) in ApoB gene and 3 SNPs in PCSK9 gene in 575 DKD patients and 653 controls, and investigated their susceptibility to DKD risk, both individually and jointly.

This is a case-control association study officially approved by the institutional review boards of the China-Japan Friendship Hospital. All study subjects were enrolled from this hospital during the period between August 2016 and December 2018, and they gave written informed consent prior to drawing blood samples for genetic analysis and filling out questionnaires.

A total of 1,228 patients, who were diagnosed with type 2 diabetes mellitus, were enrolled in this study. Of these patients, 575 had newly-diagnosed and histologically-confirmed DKD, as the case group. The remaining 653 patients who had experienced type 2 diabetes mellitus for 7 or more years, were clinically confirmed to be free of DKD, and had no history of severe kidney diseases formed the control group.

In detail, subjects in the case group were included if they had a clinical diagnosis of type 2 diabetes mellitus and 24h urinary albumin >500 mg/24 h or an albumin creatinine ratio (ACR) >30 mg/g, and subjects were excluded if they had no previous history of kidney diseases, or if they had primary or secondary kidney diseases that caused proteinuria, such as IgA nephropathy, membranous nephropathy, lupus nephritis, obstructive renal disease, and acute urinary tract infection.

Subjects in the control group were included if they had a clinical diagnosis of type 2 diabetes mellitus and ACR < 30 mg/g. Exclusion criteria were identical as the case group.

Genomic DNA was extracted from whole blood cells according to the manufacturer instructions, and quantified using the NanoDrop 1000 spectrophotometer (ThermoScientific). DNA samples were frozen at −20°C until mass genotyping.

The primer sequences and probe sequences of each SNP are summarized in Supplementary Tables 1, 2, respectively.

Continuous data are expressed as median (interquartile range), and categorical data as percentage. Two-group comparisons were completed using the Wilcoxon rank-sum test or χ2-test when appropriate. The genotypes and alleles of each SNP under study, as well as the tests for Hardy-Weinberg equilibrium, were compared using χ2-test between controls and cases. Risk prediction of each SNP for DKD, summarized as odds ratio (OR) and 95% confidence interval (CI), was calculated separately under additive and dominant models before and after adjusting for confounding factors. Linkage patterns of SNPs under study in each gene were examined using the HaploView software (version 4.2, Cambridge, MA, USA). 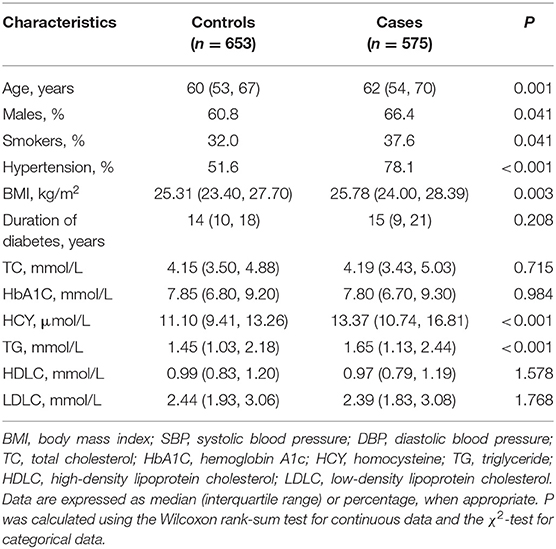 Table 1. The baseline characteristics of the study subjects. 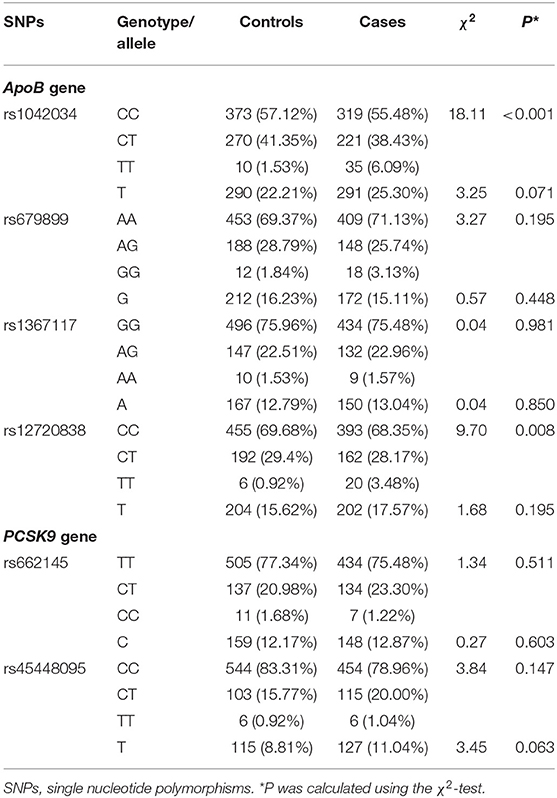 Table 2. The genotype and allele distributions of studied polymorphisms between controls and cases.

The risk prediction of the remaining 6 SNPs for DKD risk under both additive and dominant models is provided in Table 3. After adjusting for confounding factors, including age, gender, smoking, BMI, hypertension, and duration of diabetes, the mutations of rs1042034 and rs12720838 were associated with the significantly increased risk of DKD under both models of inheritance. For instance, carriers of rs1042034 T allele (CT and TT genotypes) were 1.07 times more likely to have DKD than carriers of rs1042034 CC genotype, independent of these confounders (OR = 1.07, 95% CI: 1.03–1.10, P < 0.001). 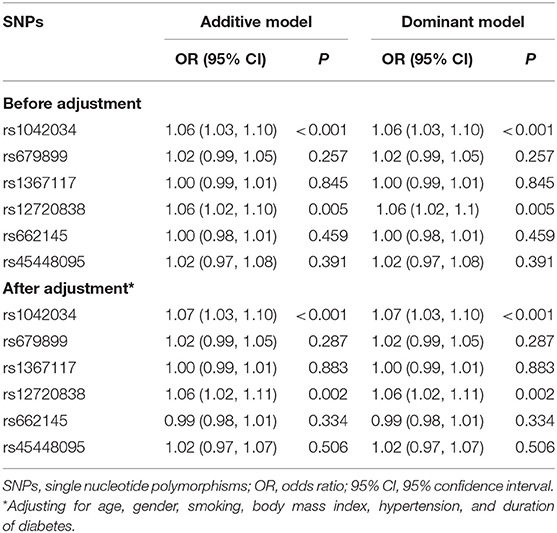 Table 3. Risk prediction of 8 studied polymorphisms for diabetic kidney disease under both additive and dominant models.

Table 4. The frequency of derived haplotypes between controls and cases, and their risk prediction for diabetic kidney disease.

No significance was noted for the comparisons of other haplotypes and risk predictions.

Table 5. Association of all derived haplotypes as a whole in each gene with baseline characteristics of study subjects.

To the best of our knowledge, this is the first study that has explored the susceptibility of ApoB and PCSK9 genetic alternations to DKD risk in a large Chinese diabetic population. The key finding of this study is that ApoB gene is a candidate gene for DKD. Particularly, two SNPs, rs1042034 and rs12720838, in ApoB gene were individually associated with the significant risk of DKD under both additive and dominant models of inheritance, and in the presence of other two SNPs in this gene, the risk was clearly enhanced, indicating the possible synergistic contribution.

DKD is a polygenic disease (18). A long list of genes have been identified to play a contributory role in the pathogenesis of DKD, such as ADIPOQ gene (19) and IL-6 gene (20). However, the results are not often reproducible at a population level. The reasons behind this poor reproducibility are manifold. The most possible reason is the divergence in the genetic underpinnings of different origins of populations. For instance, a polymorphism may be in close linkage with another nearby causal locus in one ethnic group but not in another (21). As such, it is necessary to establish a candidate list of culprit genes and mutations in each ethnic group. Another reason lies in the fact that the net impact of a single gene or single mutation on complex diseases such as DKD may be small or moderate, or its impact may be offset or antagonized by other cellular regulators (22). To shed some light on this issue, besides single-locus analysis, we also interrogated the contribution of unlinked SNPs as a haplotype, and importantly, the risk magnitude in ApoB gene was reinforced in haplotype analysis. In particular, the significant haplotype T-A-G-T in ApoB gene, harboring the mutant alleles of both rs1042034 and rs12720838, was associated with over 30% increased risk of DKD, in comparison with the increased risk of both SNPs at 6 and 6%, respectively.

The third possible reason is the involvement of environmental or intermediate phenotypes in the development of DKD, such as hypertension, which has been established as a promising risk factor for DKD (23, 24). As expected, we have observed a significant association between omnibus haplotypes in ApoB gene and hypertension. Dozens of studies have evaluated the genetic susceptibility of ApoB gene to hypertension (25–27). In view of our haplotype-disease and haplotype-phenotype analyses, it is reasonable to speculate that the association of ApoB gene with DKD may be mediated by its association with hypertension, which further precipitates the development of DKD. We agree that further studies exploring the concurrent association of ApoB genetic defects with hypertension and DKD are needed to confirm or refute this speculation.

Several limitations should be acknowledged for this association study. First, this study is cross-sectional and hospital-based in design, and all study subjects were diagnosed to have type 2 diabetes mellitus. It is of added interest to enroll healthy subjects free of type 2 diabetes mellitus as the controls. Second, only 8 candidate SNPs were selected in ApoB and PCSK9 genes. Third, the sample size is insufficient for further subsidiary investigations, such as upon stratification by gender and hypertension. Fourth, all study subjects are exclusively Chinese, and it leaves an open question for the generalizability of our findings to other ethnic groups.

Despite these limitations, our findings indicate that ApoB gene is a candidate gene for DKD in Chinese patients with type 2 diabetes mellitus. Although no hint of association was detected for PCSK9 gene, its candidacy in the development of DKD cannot be excluded, and is subject to a matter of debate. For practical reasons, further studies are needed to investigate the underlying mechanisms of ApoB, in vitro or in vivo, in the pathogenesis of DKD.

The original contributions generated in the study are included in the article/Supplementary Materials, further inquiries can be directed to the corresponding authors.

The studies involving human participants were reviewed and approved by Institutional Review Boards of the China-Japan Friendship Hospital. The patients/participants provided their written informed consent to participate in this study.

The Supplementary Material for this article can be found online at: https://www.frontiersin.org/articles/10.3389/fmed.2021.659188/full#supplementary-material

Copyright © 2021 Ma, Wang, Zhao, Yu, Deng, Jiang, Cao, Li and Niu. This is an open-access article distributed under the terms of the Creative Commons Attribution License (CC BY). The use, distribution or reproduction in other forums is permitted, provided the original author(s) and the copyright owner(s) are credited and that the original publication in this journal is cited, in accordance with accepted academic practice. No use, distribution or reproduction is permitted which does not comply with these terms.