Typhoid fever is usually a mild clinical disease. Typhoid fever with massive intestinal hemorrhage is rare in the antibiotic era. Acute acalculous cholecystitis (AAC) is also rare in adults. Here, we describe the first adult case of typhoid fever with both complications due to Vi-negative and fluoroquinolone-insensitive Salmonella enterica serovar Typhi (S. Typhi) infection. We aim to alert physicians to this rare condition.

Typhoid fever is a systemic infection caused by S. Typhi that causes an estimated 10.9 million new infections and 116,800 deaths worldwide each year (1–3). Typhoid fever usually presents with nonspecific symptoms such as malaise, fatigue, fever, abdominal pain, headache, and diarrhea or occasional constipation (4, 5). Despite improvement in treatment, 27% of hospitalized patients with typhoid fever continue to develop complications (6). The well-known complications of typhoid fever are intestinal hemorrhage and perforation, but these complications are not common in the current antibiotic era. Typhoid-induced acalculous cholecystitis rarely occurs, especially in adults.

Vi capsular polysaccharide is a major virulence factor and it is also a distinguishing feature of S. Typhi. It can increase the infectivity (7) of S. Typhi and the severity (8) of disease; however, Vi-negative isolates have been known for several decades (9).

Antimicrobial-resistant S. Typhi has been a global threat with the wide spread of multidrug-resistant (MDR) strains, defined as resistant to the traditional first-line antibiotics (ampicillin, chloramphenicol, and co-trimoxazole) since the early 1990s, and the emergence of extensively drug-resistant (XDR) strains, with resistance to the traditional first-line antibiotic fluoroquinolones and the third-generation antibiotic cephalosporins in the last 5 years (10).

This case highlights the need to raise our attention to those rare complications and antimicrobial resistance of S. Typhi for effective treatment of typhoid fever. 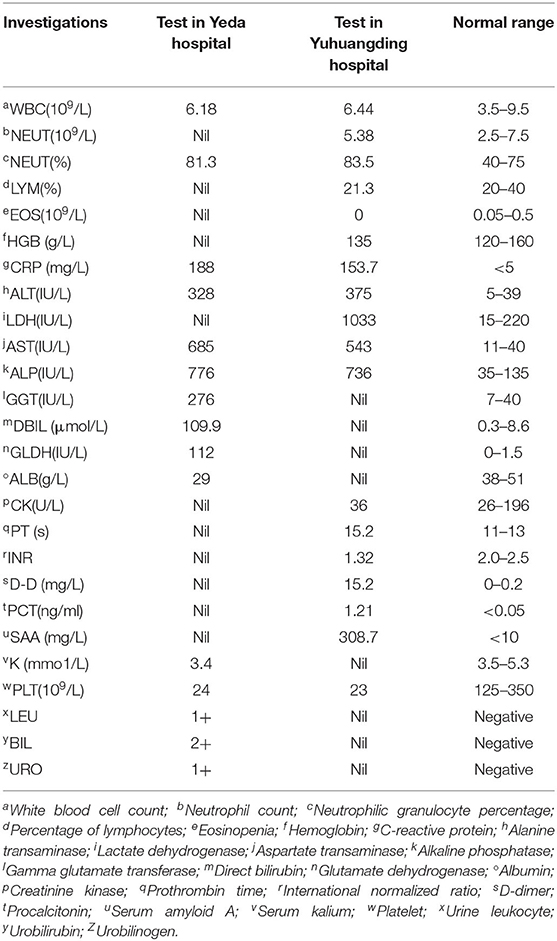 Figure 1. Chest and abdomen computerized tomography (CT) images. CT images obtained at Yuhuangding Hospital showing bilateral pleural effusion (A), hepatosplenomegaly (B), fluid collection around the right lower edge of the liver and multiple enlarged lymph nodes in the mesentery of the right lower edge of the liver, mesentery, and peritoneum of the middle abdomen (C,D), gallbladder enlargement, and rough and thickened gallbladder wall (E).

The local center for disease control and prevention immediately conducted an epidemiological investigation after receiving the report of the outbreak from Yeda Hospital. The patient was quarantined. Fifteen close contacts received fecal bacterial isolation of S. Typhi (all tests were negative) and prophylactic medication. These close contacts were monitored dynamically for early detection of suspicious symptoms. The dormitory and workplace of the patient had been thoroughly disinfected.

The S. Typhi isolate had been sent to Yantai CDC for further study. The phenotype, genotypic characteristics, and molecular typing of the isolate were studied, as described below.

The strain was identified as Salmonella enterica serovar Typhi and O9, 12: Hd serotype, using the API-20E automated microbial identification system and the White–Kauffmann–Le Minor Scheme serotyping techniques. Antimicrobial susceptibility test was performed with the AST Panel for Aerobic Gram Negative bacilli (Shanghai Xingbai Co.), referring to the interpretation of antimicrobial susceptibility of the Clinical and Laboratory Standards Institute (CLSI). The result showed that the strain was resistant to nalidixic acid, ampicillin, streptomycin, and polymyxin E and intermediate sensitive to levofloxacin, ciprofloxacin, ampicillin/sulbactam, cefazolin, and minocycline (Table 2).

Table 2. Resistotype of the S. Typhi isolate from the patient with typhoid fever.

PCR for the viaB Virulence of the S. Typhi Isolate

The viaB operon, which encodes the genes responsible for Vi antigen expression (11), was detected by PCR referring to the research of Hirose et al. (12). The result showed that the isolate lacked the viaB operon.

PFGE analysis of XbaI- and BlnI-digested genomic DNA was performed to investigate the genetic relatedness of this isolate with five isolates from other four typhoid outbreaks in Yantai during the same period (within 2 months).

The analysis was performed using a Bio-Rad CHEF-DR III electrophoresis system (Bio-Rad Laboratories, Hercules, USA), following a PulseNet standardized protocol. Image data were imported into the national pathogenic bacteria identification network information system. The result showed that the isolate of the patient was distinguishable from the other five isolates (Figure 3), indicating that this isolate had no relatedness to the other four typhoid outbreaks. The PFGE fingerprint of this isolate was compared with all fingerprints of Shandong isolates (eight strains isolated from 2017 to 2018) in the system, and we found that this PFGE pattern had not been reported in Yantai or even in Shandong province.

We present a rare case of severe typhoid fever with massive lower intestinal bleeding, AAC, and ascites, due to Vi-negative and fluoroquinolone-insensitive S. Typhi infection. Considering an incubation period of 3 to 60 days (13) and the result of PFGE analysis, the infection was most likely acquired in Mexico or on the journey.

The diagnosis of typhoid fever may be difficult due to its reduced incidence and the appearance of atypical presentations. Hoshino et al. (14) observed a high prevalence of atypical presentations in typhoid fever. Traditionally, typhoid fever has been characterized by fever, relative bradycardia, rose spots, and splenomegaly, but these signs are frequently absent (15). Our patient did not develop the typical symptoms of rose spots and relative bradycardia. However, several clinical manifestations, such as an eosinophils absolute value of 0 and a normal white blood cell count despite high fever, were ignored. Typhoidal hepatitis occurs in the majority of patients (14). However, severe hepatic derangement similar to severe acute viral hepatitis is rare. Finally, a diagnosis of typhoid fever was established by the positive blood culture 10 days after onset. Isolation of the causative bacteria from blood remains the gold standard for the diagnosis of typhoid fever (16). Early diagnosis based on appropriate bacteriological inspection rather than typical symptoms should be stressed.

Vi capsular polysaccharide, which plays an important role in conferring resistance to the killing effect of serum, is a major virulence factor of S. Typhi (8). Despite the character of the Vi antigen as a distinguishing feature of S. Typhi, Vi-negative isolates have been reported in several countries (9, 17). Furthermore, there have been reports of typhoid outbreaks caused by Vi-negative S. Typhi (17), but the clinical symptoms were not described. Despite being less infective than Vi-positive S. Typhi, Vi-negative isolates can cause an indistinguishable typhoid fever from the one caused by Vi-positive isolates in volunteers (7). Vi antigen increases the infectivity (7) of the isolates and the severity of the disease (8). In this case, we found that Vi-negative S. Typhi-infected cases could also develop severe complications.

In the pre-antibiotic era, intestinal hemorrhage was quite common especially in patients who had been ill for more than 2 weeks (13). With the advent of antibiotics, the incidence of this complication is on the decline. The terminal ileum is the common site of hemorrhage in typhoid fever since it has abundance of Peyer's patches in which infection induces hyperplasia, leading to possibly subsequent ulceration that can either perforate or erode a vessel causing the hemorrhage. In 2017, the state of Yucatan in southeastern Mexico witnessed a sudden and substantial jump in the number of typhoid cases, with 11% patients suffering from gastrointestinal bleeding, but the etiological characteristics of the isolates were not reported (21). Several literatures have described the relationship between duration of pre-hospital symptoms and risk of complications (6, 22). A short period of fever and thrombocytopenia on admission may be the early signs of complications (23, 24). Relative bradycardia may be a more common symptom in the early stages of uncomplicated typhoid fever (25). Severe typhoid fever with complications has been reported to be associated with age, sex, and intermediate susceptibility to ciprofloxacin, but it is controversial (24, 26). Intestinal hemorrhage is usually mild and can be treated conservatively, but massive or persistent bleeding probably requires further intervention such as TAE or surgery. TAE is now accepted to be performed in cases of acute or massive gastrointestinal bleeding or recurrent postoperative bleeding (27), especially in cases with greater comorbidities unfit for surgery (28). However, complications such as rebleeding and bowel ischemia should be considered (29). Research by Tarasconi et al. (28) shows that TAE is safe and effective, but TAE is no substitute for surgery. The decision should be made by the relevant endoscopists, interventional radiologists, and surgeons depending on an individual basis and the characteristics of the hemorrhagic lesions (28).

Acute acalculous cholecystitis is a life-threatening disorder that usually occurs after severe burns, sepsis, extensive trauma, cardiovascular disease, diabetes, heart attack, major surgery, malignancy, or prolonged parenteral nutrition (30), with a total mortality of 15% and a post-trauma mortality of 27% (31). Typhoidal AAC is rare, with a reported incidence of 1.7% (32). It was primarily reported in a pediatric population (33, 34). This rare complication may be linked to MDR or more virulent forms of Salmonella infection (35). A study by Alam Sher Malik (36) showed that children with splenomegaly, thrombocytopenia, or leukopenia were more likely to develop complications, including cholecystitis. The onset time of typhoidal AAC is variable. It can occur in the first week or the second week, or even during convalescence or relapse (33). Our patient presented with the typical Charcot's triad of fever, right sided abdominal pain, and jaundice. Fever, vomiting, right upper quadrant abdominal pain, and jaundice are important manifestations in the diagnosis of AAC (30). Ultrasonography and CT are very helpful in the diagnosis of AAC (31). The treatment of acalculous cholecystitis is in principle the same as that of calculous cholecystitis (31). However, acalculous cholecystitis tends to occur in patients with severe disease, and often has a poor prognosis due to the high risk of perforation and necrosis (30). Therefore, early cholecystectomy appears to be preferable to conservative treatment, but the choice of treatment should be made based on an individual basis (31).

Since the patient returned to Mexico soon after discharge, systematic follow-up could not be performed for accurate prognostic information.

Copyright © 2021 Gong, Li, Zhu, Wang, Xu, Li, Wang, Song, Liu and Tian. This is an open-access article distributed under the terms of the Creative Commons Attribution License (CC BY). The use, distribution or reproduction in other forums is permitted, provided the original author(s) and the copyright owner(s) are credited and that the original publication in this journal is cited, in accordance with accepted academic practice. No use, distribution or reproduction is permitted which does not comply with these terms.

Diagnostics to Bolster Our Fight Against Antibiotic Resistance