The Epidemiology of Lung Metastases

Introduction: Lung metastasis is usually associated with poor outcomes in cancer patients. This study was performed to characterize and analyze the population of patients with de novo (synchronous) lung metastases using the Surveillance, Epidemiology and End Results (SEER) database.

Materials and Methods: Baseline characteristics of lung metastasis patients were obtained from SEER case listings. Incidence rates and counts of synchronous lung metastasis were also obtained using the SEER*Stat software. Survival outcomes were analyzed using univariate and multivariable Cox regressions, controlling for confounders. An alpha threshold of 0.05 was used for statistical significance and p-values were subject to correction for multiple comparisons.

The diagnosis of metastasis heralds death in most cancer patients. Lung metastases are frequently observed across many primary cancer sites and are commonly considered to confer poor prognosis (1–7). The healthcare impact of lung metastases, whose treatment grows increasingly nuanced (8–10), is also a significant public health concern.

Among metastases, synchronous metastases that appear at, or close to, the time of presentation appear to be a distinct entity that may be associated with inferior outcomes in certain primary sites (23–25). As research into the treatment of metastases accelerates, it is increasingly important to provide a description of the disease frequency and general outcomes of patients with de novo, synchronous lung metastasis across all primary sites. The population-level Surveillance, Epidemiology and End Results (SEER) database is a powerful source of data to address these questions.

The SEER database covers ~28% of the population of the United States (US) as of 2017 (26). The SEER*Stat software (v8.3.5) was used to query the SEER 18-registry research database (November 2017 submission) (27). All relevant ethics regulations are observed. This study was exempt from Institutional Review Board review due to the usage of a publicly available, anonymous database. For incidence rates, age-adjusted incidence rates standardized to the 2000 US census population were obtained for patients with de novo (synchronous) lung metastases from 2010 to 2015 using the SEER*Stat software. De novo (synchronous) lung metastases were defined as those found at the time as the primary cancer diagnosis and contributed to the initial staging of the primary cancer. This is in contrast to recurrent (metachronous) lung metastases, which arise after the initial diagnosis of the primary cancer. The SEER*Stat software was also used to calculate the annual percent change in the incidence rates of synchronous lung metastasis via weighted linear regression methods (28).

All statistical analysis was carried out in the R statistical platform (v3.6.1 x64). An alpha threshold of 0.05 was used for statistical significance. All P-values reported were two-sided. Comparisons of baseline statistics were performed using Student's t-tests for continuous variables, chi-squared tests for categorical variables and log-rank tests for time to event variables, where appropriate. The Cochran-Armitage test was used for the analysis of overall and site-specific time trends. Results obtained from multiple tests on the same patient population, such as survival analysis stratified by primary site, were subject to Holm's correction for multiple testing (29, 30).

For survival analysis, the population used was all cases with de novo metastatic cancer (M1+ by the American Joint Committee on Cancer 7th edition definition) in the SEER database from 2010 to 2015. Overall survival functions were estimated by the Kaplan-Meier method. Univariate Cox proportional hazards regression were used to compare the hazards of death for metastatic cases with lung metastasis vs. those with only extrapulmonary metastases. The potential confounders of age, sex, race, year of diagnosis, T-stage, nodal status and the presence of bone, brain or liver metastasis were adjusted for in multiple Cox regression models. Reported hazard ratios are followed by their 95% confidence intervals in brackets. Effect modification by age, sex, and race was investigated by the addition of interaction terms to the multiple Cox regression models. Records with missing values consisted <0.1% of the survival dataset and were therefore omitted in statistical analysis.

Table 1. Summary of baseline characteristics for all cancer cases with and without synchronous lung metastasis in the United States from 2010 to 2015. 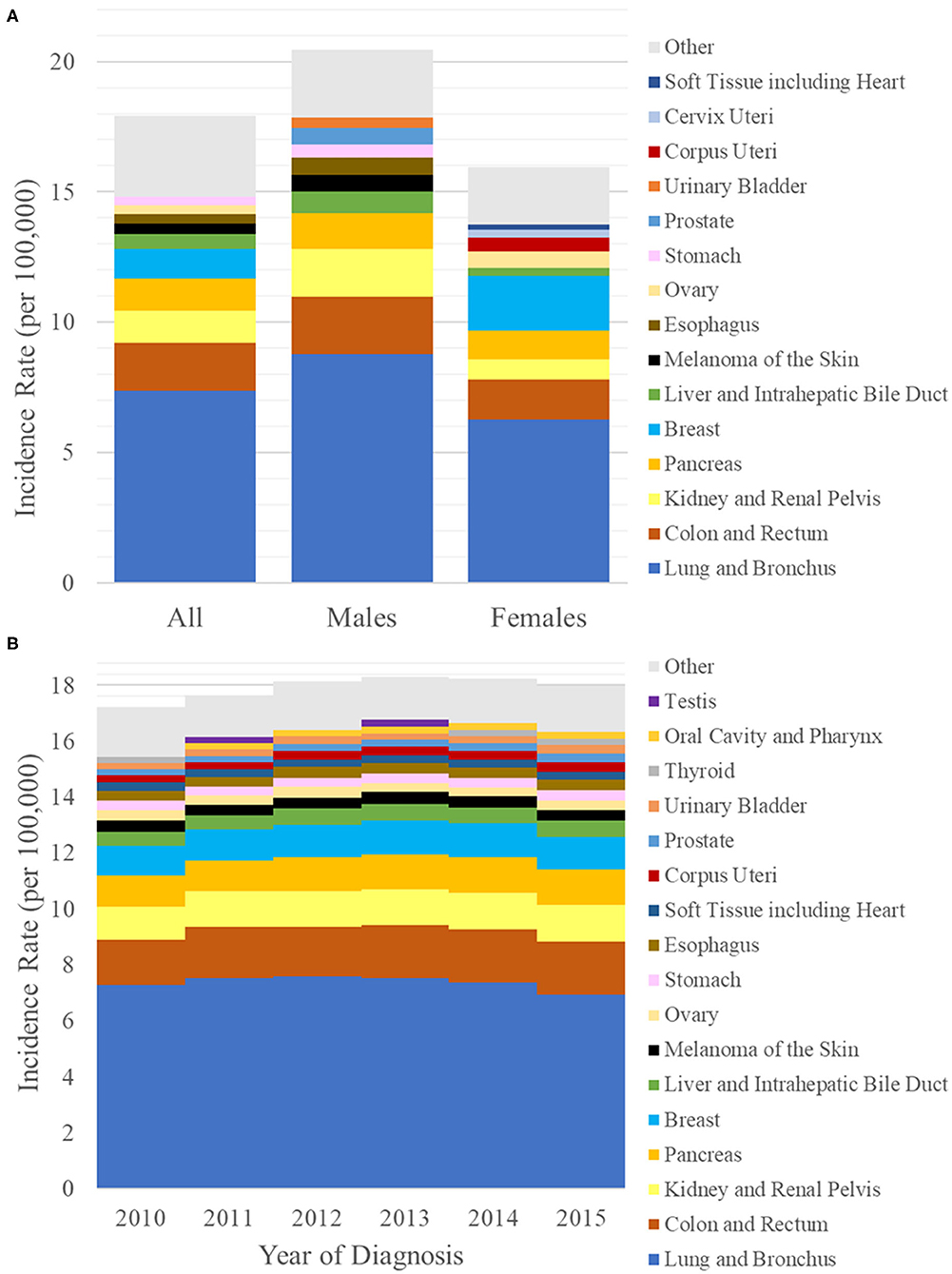 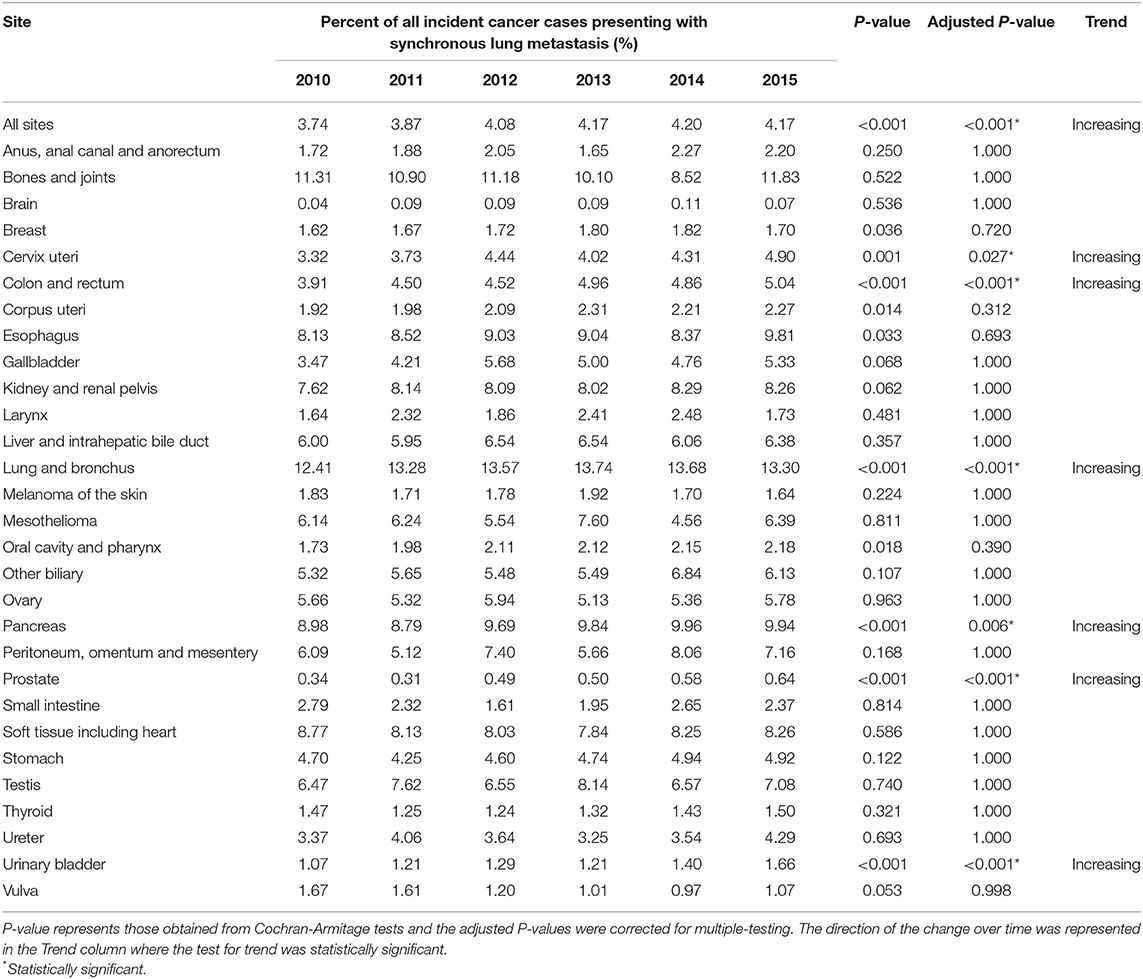 Table 2. Time trend of the percent of all incidence cancer cases presenting with synchronous lung metastasis in the United States from 2010 to 2015, stratified by primary site of origin. 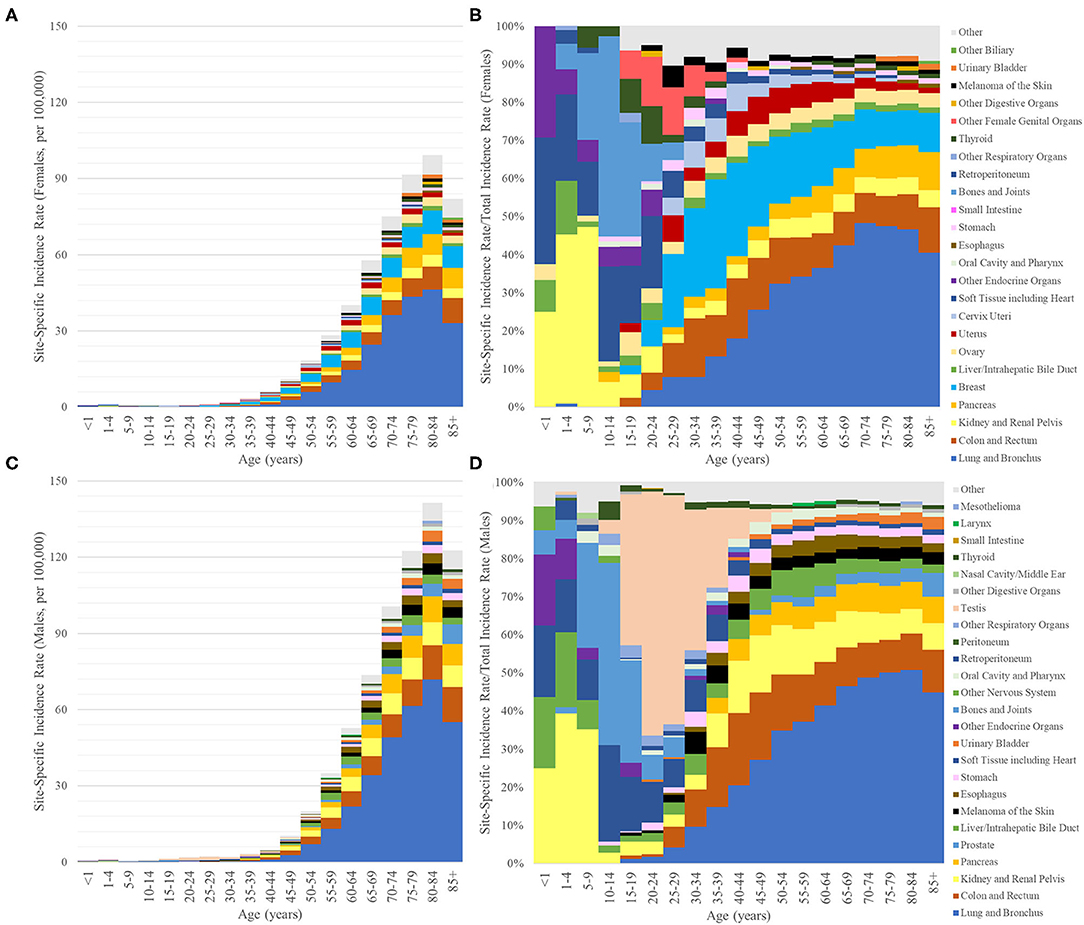 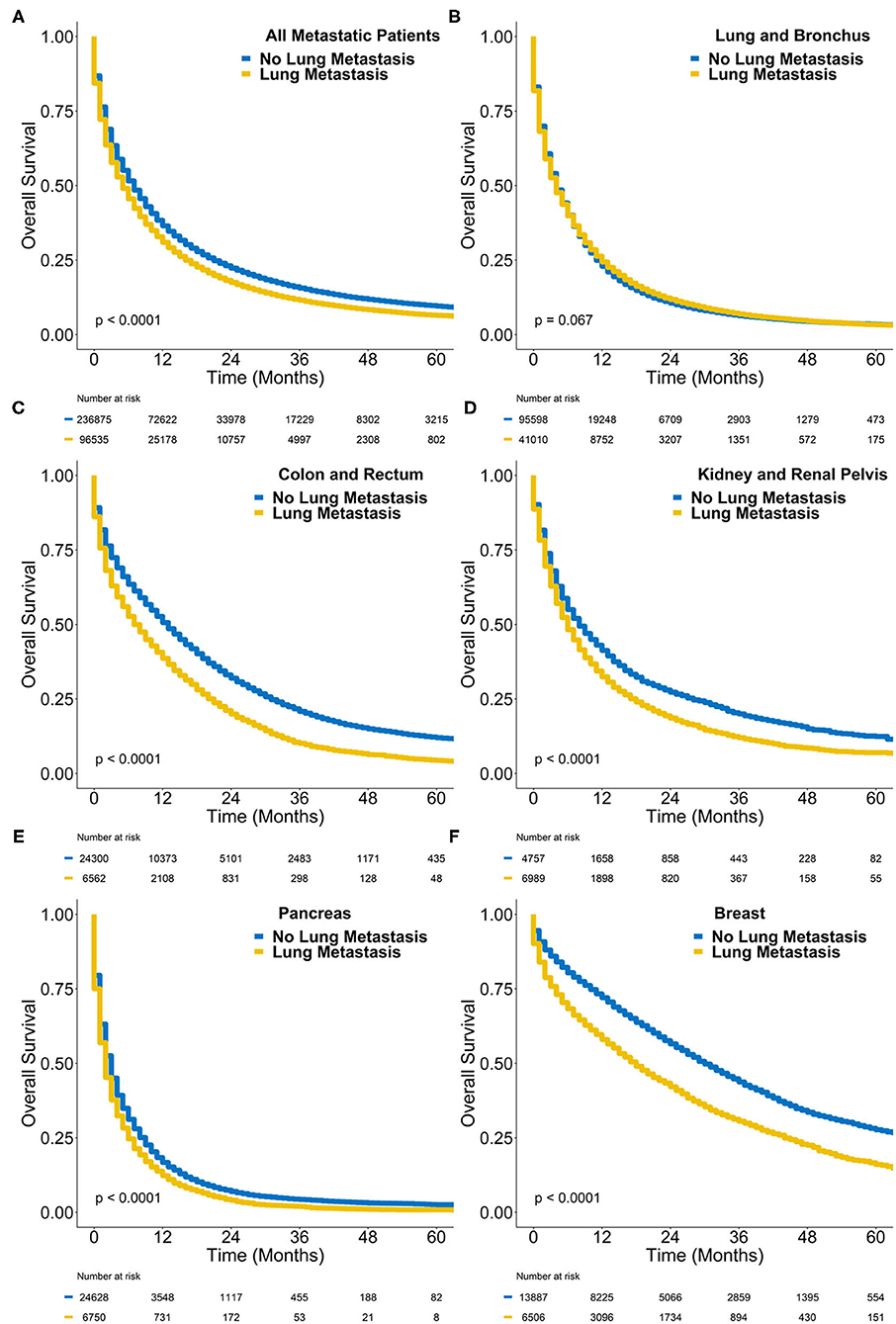 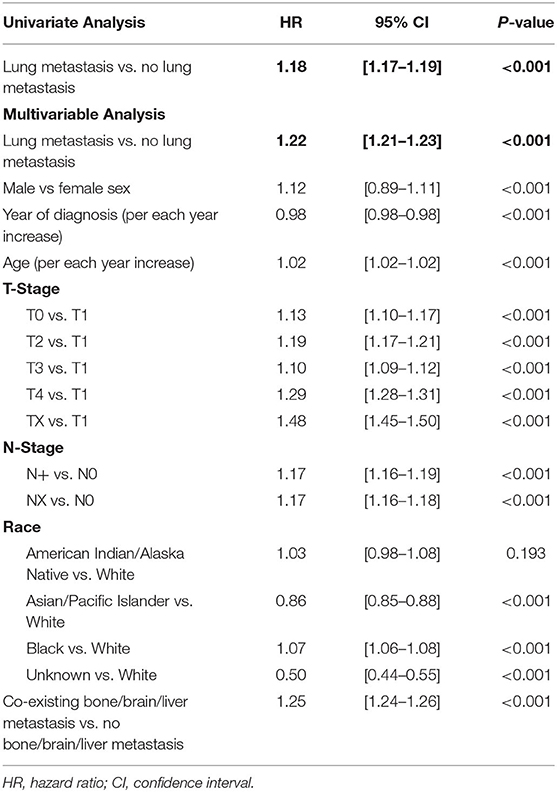 Table 3. Results of univariate and multivariable cox regression comparing the hazards of death of de novo metastatic patients with lung metastasis vs. those without lung metastasis. 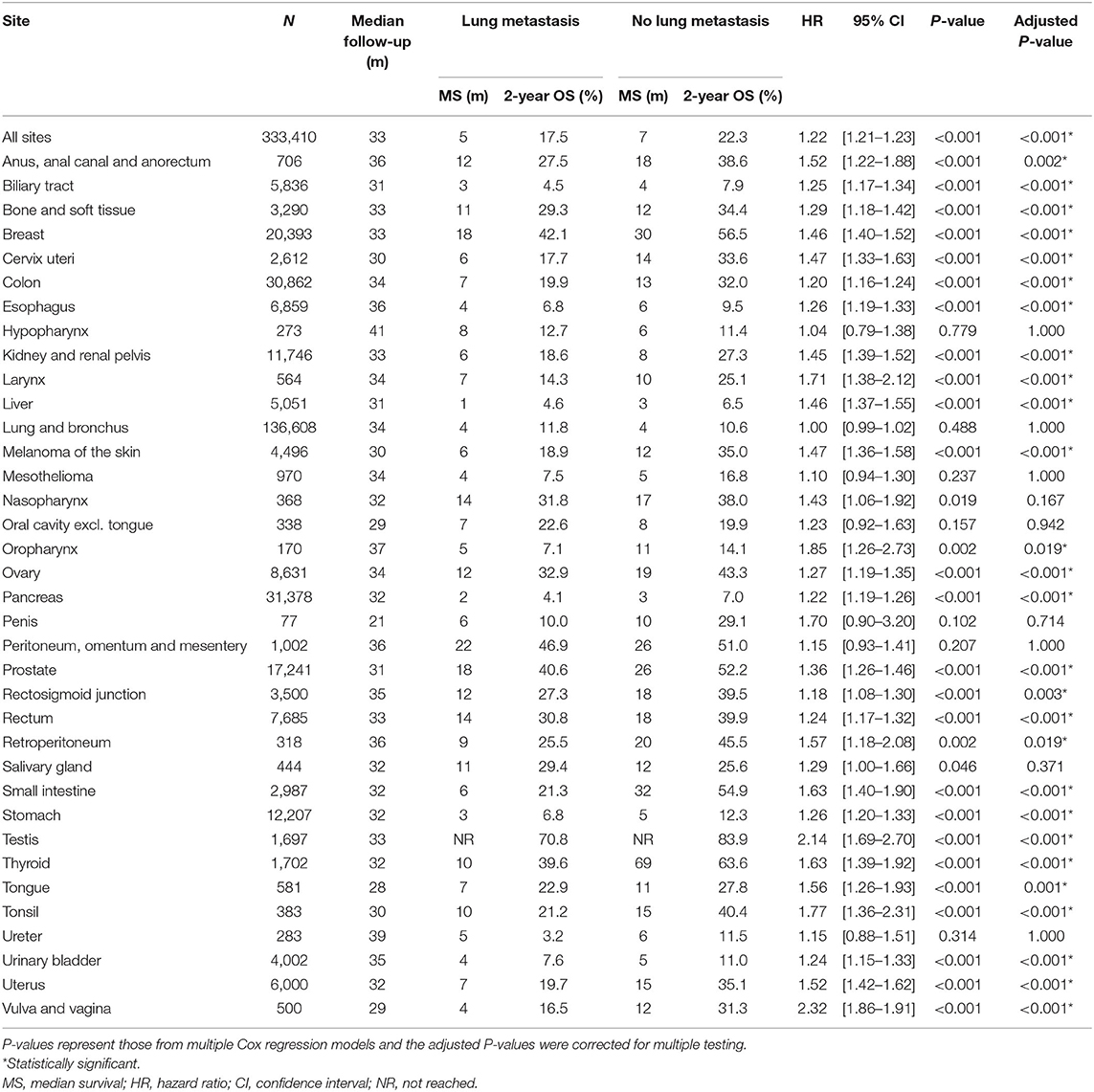 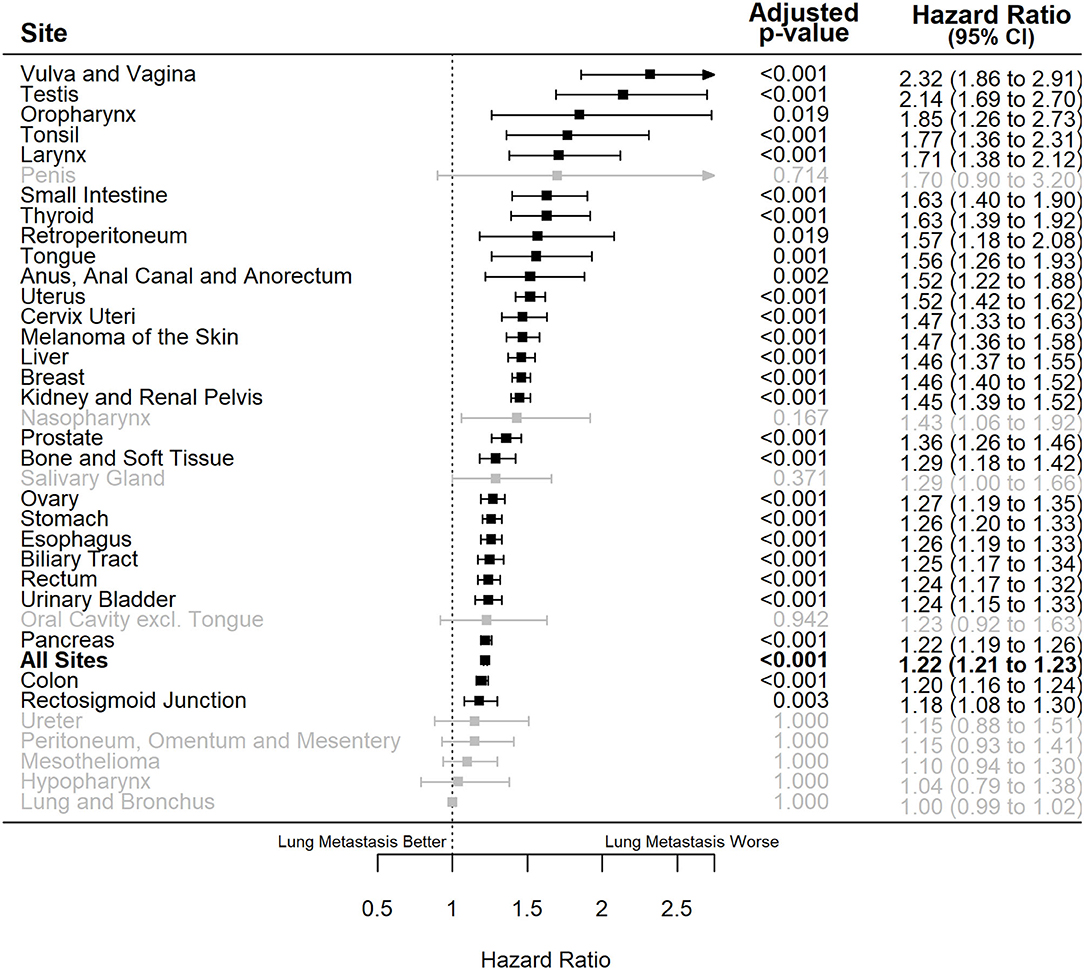 In comparison to previously published results, Mitry et al. reported that 2.1% of colorectal cancers presented with synchronous lung metastasis in a cohort of 6,996 French colorectal cancer patients between 1976 and 2005 (2). This is somewhat lower than the SEER data of 3.9–5% between 2010 and 2015 (Table 2). However, Mitry et al. also reported a significant increase in the proportion of metastatic colorectal patients presenting with synchronous lung metastasis over time. Similarly, van der Geest et al. also reported an increase in the proportion of all colorectal patients presenting with lung metastasis, going from 1.7 to 5% between 1996 and 2011 (21). This time trend observed both in our study and previous studies likely represented advancements in imaging technologies with the introduction of wide-spread computed tomography (CT) and later positron emission tomography (PET) in recent years (31). However, it is uncertain whether there are other potential drivers for the increase in the proportion of cases with synchronous lung metastasis. Specifically, it is possible that the increase of synchronous lung metastasis in prostate cancer arose more from the decreasing popularity of prostate-specific antigen screening, leading to more advanced disease at presentation (32, 33).

Our study was limited by several factors. The SEER database does not collect data on subsequent (i.e., metachronous) metastases. There have been instances of attempting to use the linked US Medicare database to obtain linked information on metachronous metastases, but this approach is likely limited by the potential of under- or mis-identifying metachronous cases (37). The SEER database also lacks the total number of metastases at diagnosis, precluding an analysis of oligometastatic vs. non-oligometastatic disease at diagnosis. Baseline performance status is also not captured in the SEER database. As a result of these limitations, we have not compared the effect of treatment options such as surgery, radiotherapy, or systemic therapy on the survival of patients with synchronous lung metastasis due to the inability to adjust for the number of metastases and performance status.

The original contributions generated for the study are included in the article/Supplementary Material, further inquiries can be directed to the corresponding author/s.

The Supplementary Material for this article can be found online at: https://www.frontiersin.org/articles/10.3389/fmed.2021.723396/full#supplementary-material

37. SEER. Measures That Are Limited or Not. (2019). Available online at: https://healthcaredelivery.cancer.gov/seermedicare/considerations/measures.html#13 (accessed August 7, 2019).

Copyright © 2021 Chen, Stoltzfus, Lehrer, Horn, Siva, Trifiletti, Meng, Verma, Louie and Zaorsky. This is an open-access article distributed under the terms of the Creative Commons Attribution License (CC BY). The use, distribution or reproduction in other forums is permitted, provided the original author(s) and the copyright owner(s) are credited and that the original publication in this journal is cited, in accordance with accepted academic practice. No use, distribution or reproduction is permitted which does not comply with these terms.