Department of Cardiac, Thoracic and Vascular Sciences, School of Medicine and Surgery, University of Padua, Italy

Background: Real-world data regarding outcomes of idiopathic pulmonary fibrosis (IPF) are scarce, outside of registries. The claims data from the French National Health System (SNDS) were used to describe outcomes in patients diagnosed with IPF in 2015–2016 but who did not receive antifibrotic therapies.

Method: Patients aged <50 years were excluded, as were patients with pulmonary fibrosis other than IPF, patients who had previously received a lung transplant, and those who had received antifibrotic therapies at any time between 2010 and 2016. Patients were followed-up until their last health record, lung transplantation, initiation of antifibrotic therapies, death, or the end of the study period (31 December 2017), whichever occurred first.

Interpretation: This observational study showed that, if untreated with antifibrotics, IPF is associated with a 50% all-cause mortality at 3 years. These figures can serve as a historical control of the natural course of the disease.

Idiopathic pulmonary fibrosis (IPF) is a chronic, relentlessly progressive and ultimately fatal lung disease of unknown etiology (1) leading to death within 2–5 years of diagnosis if untreated, often with interspersed episodes of acute exacerbation (2). Pirfenidone and nintedanib, currently the only approved antifibrotic therapies for IPF (3), slow lung function decline and reduce the risk of respiratory-related hospitalizations, which are associated with high morbidity and mortality (4, 5). Nonetheless, many individuals diagnosed with IPF do not receive antifibrotic therapies (6). Nowadays, real world survival data from large unselected and untreated IPF patient populations outside of registries are scarce. Here, using claims data from the French National Health System (NHS), we studied the characteristics, all-cause mortality, and rates of acute respiratory-related hospitalizations of patients diagnosed with IPF but who did not receive antifibrotics.

This retrospective, population-based cohort study used digital data from the Système National des Données de Santé (SNDS), which covers 98.8% of the population living in France. This unique real-world dataset of French healthcare utilization is one of the largest data repositories worldwide. It contains comprehensive, anonymous, individual information on sociodemographic characteristics, date of death, out-of-hospital reimbursed healthcare expenditures (from both public and private healthcare), and hospital discharge summaries with International Classification of Diseases (ICD)-10 codes (7). In addition, the SNDS contains direct information on medical diagnoses for patients who have full coverage by the NHS for all medical expenses (“chronic disease status”), including most patients diagnosed with IPF in France.

The study population consisted of patients diagnosed with IPF identified in the SNDS between 1 January 2015 and 31 December 2016. Patients were included if they were hospitalized for IPF as the main or related diagnosis (J841 ICD-10 code), or had a “chronic disease” status for IPF. To ensure analytical data exhaustivity, only patients continuously covered by the French NHS during the study period (between 1 January 2010 and 31 December 2017) were included.

Patients younger than 50 were excluded, as well as patients with pulmonary fibrosis other than IPF (see Supplementary Table 1), patients who had previously received a lung transplant, and those who had received antifibrotic therapies at any time between 2010 and 2016 (8). Patients were followed-up until their last health record, lung transplantation, initiation of antifibrotics, death, or the end of the study period (31 December 2017), whichever occurred first. Pirfenidone has been available in France since October 2012 and nintedanib since April 2015. As data from SNDS are made available with some delay, 2017 was the last year available at the time of the analyses and follow-up was censored as of 31 December 2017.

The outcomes of interest were all-cause mortality and acute respiratory-related hospitalization, i.e., related to acute respiratory events, triggered or idiopathic, as identified using the main diagnoses of hospitalizations [see Supplementary Table 2; (8)]. Time to first occurrence of the events was estimated using cumulative incidence functions with confidence intervals. For each patient, differences in follow-up were accounted for through non-informative censoring at the end of follow-up. As mortality was >10%, the competing risk of mortality was accounted for through informative censoring at death.

This study was approved by the French Institute for Health Data (approval no. 57932 from 12 July 2018). It was conducted with anonymised data, as requested by the National Informatics and Liberty Commission (CNIL), approval no. 918255, from 8 August 2018. 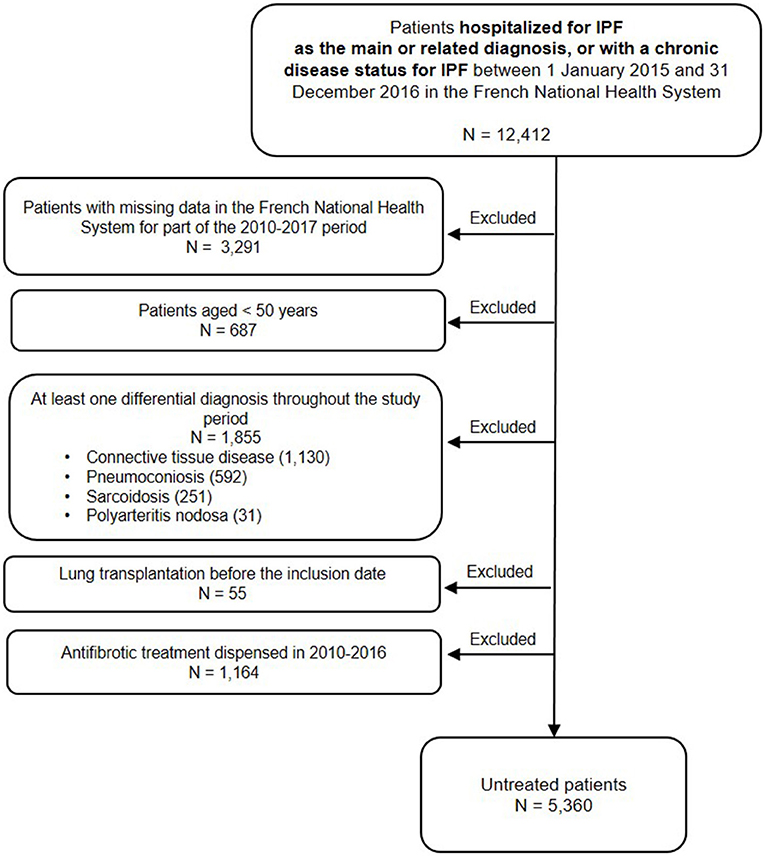 The mean age was 75.5 years, and 57.9% were males. In the year before inclusion, 47.3% of patients had a Charlson score ≥5, 74% of patients visited an office-based lung specialist or a hospital practitioner at least once, 81.7% of patients experienced at least one acute respiratory-related hospitalizations, and 19.4% of patients used supplementary oxygen (Table 1). 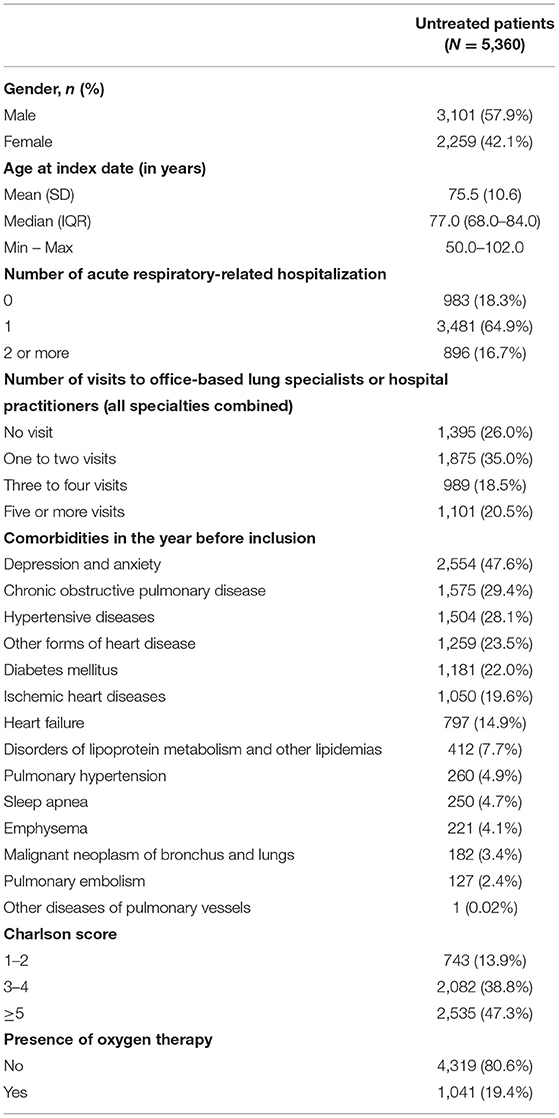 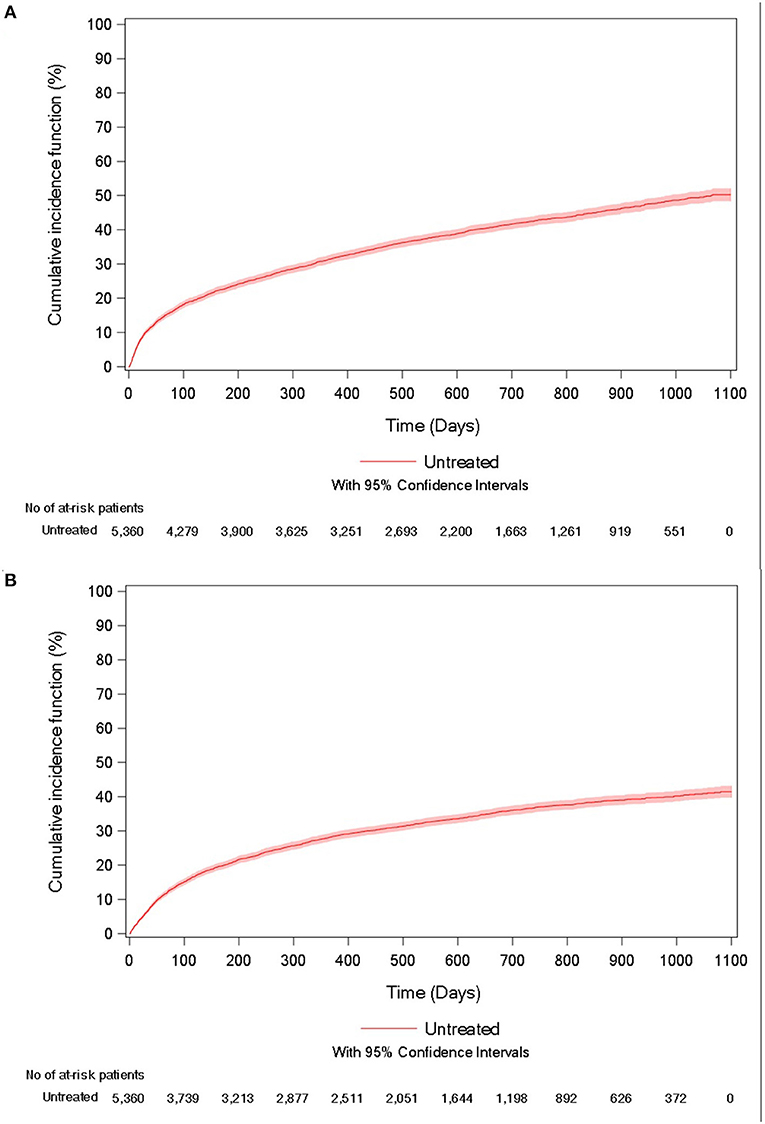 In summary, IPF patients untreated with antifibrotic therapies had poor outcomes, with a 50% all-cause mortality and a 42% cumulative incidence rate of acute respiratory-related hospitalization at 3 years. Using the same dataset, we previously found cumulative incidence rates at 3 years of 26 and 31% for all-cause mortality, and of 48 and 44% for acute respiratory-related hospitalization, in patients newly treated with pirfenidone and nintedanib, respectively (8).

These findings confirm, in an unselected cohort of 5,360 patients, the progressive and ultimately fatal nature of the disease, in agreement with the literature (9, 10). In a study by Dempsey et al. (11), all-cause mortality cumulative risk was 16.5% (14.2–19.1) at 52 weeks, but their study included younger and less severe patients than ours. In a study by Nathan et al. (12) and the INPULSIS trial (5), 6.7 and 7.8% of the patients died in the placebo group, respectively, confirming lower mortality rates in Phase 3 trials compared to clinical practice, possibly as a result of the selection of less severe IPF patients in trials.

We computed all-cause mortality in IPF patients untreated with antifibrotic therapies, a major endpoint for both patients and clinicians (13). Indeed, the French health care utilization dataset contains exhaustive individual data on drug use, hospital admissions, and death, therefore producing robust figures on either use -or non-use- of therapy and outcomes. The specificities of the French health care system -a single payer system covering the entire population-, and the completeness and duration of individual records of health care utilization make it a valid tool for investigating IPF and specific therapy in the overall population.

Similar to other investigations of this kind, this study is limited by its observational design and its data source. The ICD-10 code used to confirm the presence of pulmonary fibrosis (J841) is not specific of IPF, and ICD codes and age were mostly used to exclude other forms of fibrotic interstitial lung diseases among patients initiating an antifibrotic therapies. Patients younger than 50 years were not included, therefore patients with IPF of genetic origin may be underrepresented. Although imperfect, this approach has previously been used in other studies on claims data and in a study using the French healthcare dataset that further validated the definition algorithm for acute respiratory-related hospitalizations (11, 14). Data on lung function, a major determinant of IPF prognosis, were not available, as is mostly the case for claims data. There was a high rate of patients not receiving an antifibrotic therapy in this study, comparable to other studies (11), with multiple possible causes, including the study period and relative novelty of antifibrotic therapies at the time; patients' and physicians' preferences; and the small number of ILD centers in France at the time (15). Reasons for not initiating antifibrotic therapies were however not available. The proportion of patients diagnosed with IPF who now receive an antifibrotic therapies may have increased. The rate of patients receiving supplemental oxygen therapy was relatively low however consistent with another study (16). In conclusion, this observational study that included over 5,000 IPF patients showed that, if untreated with antifibrotic therapies, the disease is associated with a 50% all-cause mortality at 3 years. These figures can serve as a historical control of the natural course of the disease.

The data analyzed in this study is subject to the following licenses/restrictions: Due to NHS and SNDS rules, no data sharing is possible as access to data is restricted to habilitated and qualified researchers.

VC, MB, and EVG were responsible for producing the initial draft of the paper. MN carried out the primary statistical analysis and including figures and tables. PS, PB, FD, K-UK, and TK provided written comments and feedback during manuscript development and were directly involved in the execution of the study. All authors contributed to the article and approved the submitted version.

The reviewer NB declared a shared affiliation with one of the author PS, to the handling editor at time of review.

The Supplementary Material for this article can be found online at: https://www.frontiersin.org/articles/10.3389/fmed.2021.802989/full#supplementary-material

Copyright © 2021 Cottin, Spagnolo, Bonniaud, Nolin, Dalon, Kirchgässler, Kamath, Van Ganse and Belhassen. This is an open-access article distributed under the terms of the Creative Commons Attribution License (CC BY). The use, distribution or reproduction in other forums is permitted, provided the original author(s) and the copyright owner(s) are credited and that the original publication in this journal is cited, in accordance with accepted academic practice. No use, distribution or reproduction is permitted which does not comply with these terms.