Background: Gastric polyp is an abnormally proliferative or neoplastic growth of the gastric mucosa, with a degree of tendency to transform into gastric cancer. Lack of physical activity that is significantly related to low muscle mass (LMM) and muscle strength has been identified to be associated with gastric polyps. In this study, we examine the association of LMM and different histological types of gastric polyps among Chinese asymptomatic adult males.

Methods: In total, 1,742 male adults undergoing bioelectrical impedance analysis and upper gastrointestinal endoscopies were included. Univariate and multivariate logistic regression models were used to analyze the effect of LMM on the risk of gastric polyps and different histological types.

Conclusion: In general, LMM was an independent indicator for hyperplastic and inflammatory polyps occurrence in Chinese asymptomatic adult males.

Gastric polyp is an abnormally proliferative or neoplastic growth of the gastric mucosa, protruding into the lumen of stomach (1), with a degree of tendency to transform into gastric cancer (2). The incidence of gastric polyps varies between 1 and 6% in individuals who undergo upper gastrointestinal endoscopies (3–6). The most common subtypes of gastric polyps are fundic gland polyp, hyperplastic or inflammatory polyp, and adenomatous polyp (7).

We conducted a cross-sectional study of Chinese adult males having a health-check in the First Affiliated Hospital of Wenzhou Medical University between January 2018 and June 2018.

Baseline characteristic were collected by predesigned questionnaires, including age, gender, alcohol and smoking consumption, comorbidities, and histories of medication and surgery.

Smoking status was classified into 3 types: non-smoker (has never smoked before), past smoker (has quit for at least 2 yeas), and current smoker (is still smoking until the day of health-check or quit < 2 years). Males with alcohol consumption >140 g per week were regarded as heavy drinkers. Comorbidities were obtained by questionnaire and measurement, including hypertension (HTN), diabetes mellitus (DM), dyslipidemia, and metabolic syndrome (MS). The blood pressure measurement, blood detection, and 13C-urea breath test were performed on the morning of the health-check. The following blood measurements were tested: serum lipid profile, fasting blood glucose, and glycated hemoglobin.

The BIA and upper gastrointestinal endoscopy were performed in each individual. The appendicular skeletal muscle mass (ASM, kg) was measured by BIA (InBody770; InBody Korean Inc.). The ASM (kg)/BMI (kg/m2) was calculated to evaluate the muscle mass. According to the Foundation for the National Institutes of Health (FNIH) (14, 15), males with ASM/BMI <0.789 m2 were regarded as having low skeletal muscle mass. The endoscopic characteristics of polyps were recorded and analyzed, including existence, location, number, and size of pathological diagnosis. Helicobacter Pylori infection was detected by histopathological result of biopsied stomach specimen or 13C-urea breath test.

Category variables were compared by Pearson χ2 tests and displayed as frequencies (percentages). The normal distribution of continuous variables was tested by Shapiro–Wilk test. Continuous variables were compared by Wilcox test and displayed as median (range). Univariate and multivariate logistic regression analyses were performed to determine the effect of LMM on gastric polyp occurrence, containing different pathological types. Variables, including age, smoking status, heavy drinking status, diabetes mellitus, hypertension, dyslipidemia, metabolic syndrome, Helicobacter Pylori infection, and LMM, were analyzed by univariate analysis. Variables with p < 0.1 in univariate analysis were incorporated into the subsequent multivariate analysis. In addition, we compared ASM/BMI between individuals with and without gastric polyps by Wilcox test.

All statistical analyses were carried out using R version 3.6.1 (https://www.r-project.org/). All analyses were two-tailed, with p < 0.05 considered significant.

We included 1,742 males, 1,487 of whom were in the group without LMM and 255 of them in the group with LMM (Table 1). The median of ASM/BMI was 0.903, range from 0.555 to 1.934. One hundred and ten males were diagnosed with gastric polyps (Table 2), with an incidence rate of 6.31%. There were three pathological types: fundic gland polyps (N = 54), hyperplastic and inflammatory polyps (N = 53), and adenomatous polyps (N = 1). The histology was not available on two individuals because of unsuitable biopsy specimens. 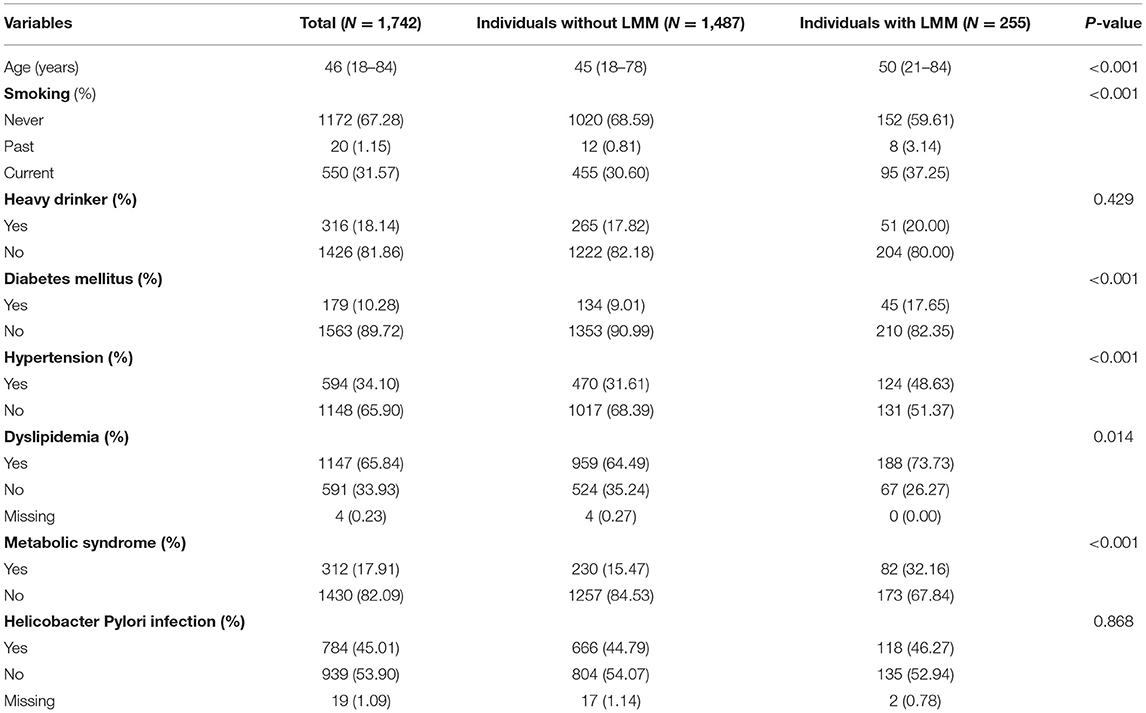 Table 1. Baseline characteristics between individuals with and without low skeletal muscle mass [median (range) or n (%)].

Different ASM/BMI in Individuals With and Without Gastric Polyps 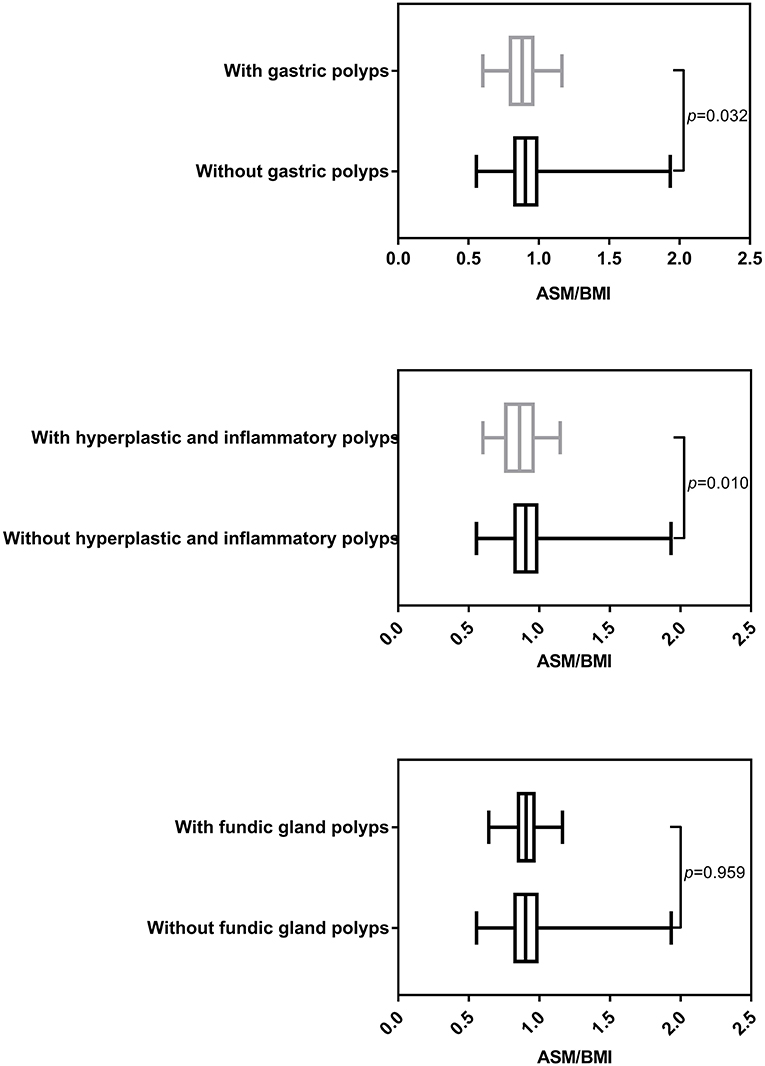 Figure 1. Different ASM/BMI of individuals with and without gastric polyps (including different histological types). 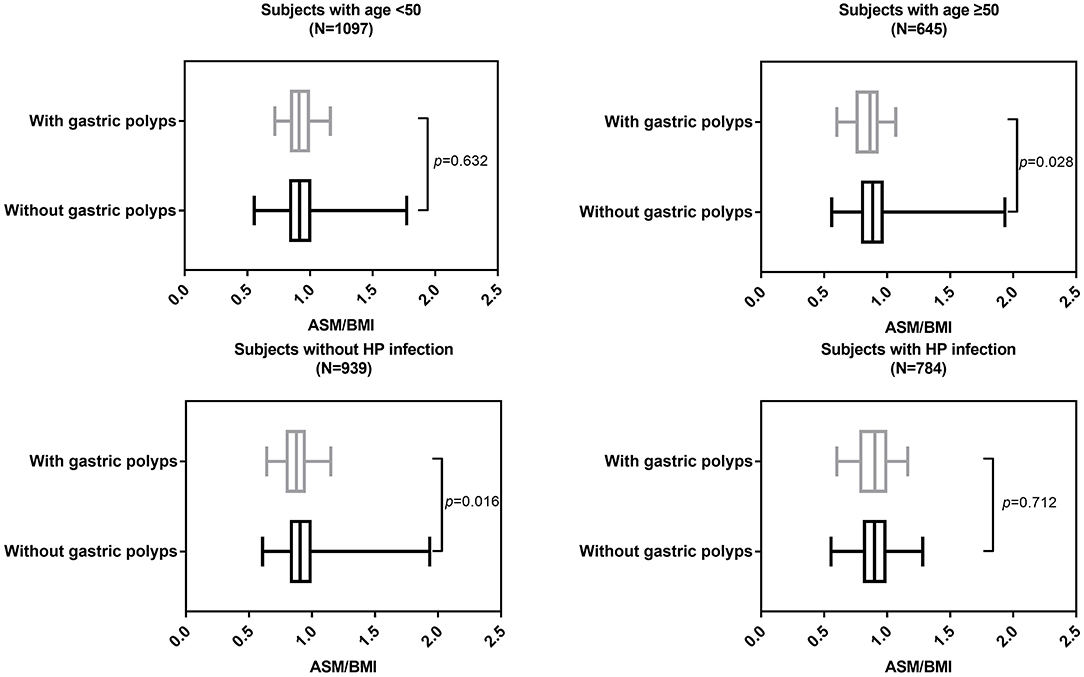 Figure 2. ASM/BMI of individuals with and without gastric polyps in different subgroups.

Figure 3. ASM/BMI of individuals with and without hyperplastic and inflammatory polyps in different subgroups.

In this study, we found an association between LMM and increased occurrence of hyperplastic and inflammatory polyps in asymptomatic males. Up to now, there has been no research concerning the relation between reduced muscle mass and occurrence of gastric polyps. However, the inverse associations between physical activity and the presence of colorectal polyps, adenomas, and even cancer have been previously reported (16–21). A study by Wang et al. (10) mentioned that lack of physical exercise was significantly associated with gastric polyps. Physical inactivity was a major cause of sarcopenia, which manifested as reduced muscle mass and strength (22). There might be an underlying connection between low muscle mass, gastric polyps, and physical inactivity. A relevant mechanism study about the relationship is needed in the future.

Muscle mass, which could be easily quantitatively detected by BIA or dual X-ray absorptiometry (DXA), is cost-effective and of great importance for the diagnosis of sarcopenia (14). It was necessary to detect the muscle mass before gastrointestinal endoscopies, which is predictive for hyperplastic and inflammatory polyps. In addition, enhanced physical exercise might be a preventive action to avoid possible gastric polyps to some extent. However, further prospective studies are required to determine the effect of physical activity on risk of gastric polyps.

It was cross-sectional study with large sample size, and there was a new-found association between low muscle mass and hyperplastic or inflammatory polyps. Detection of muscle mass prior to gastrointestinal endoscopies could help doctors with psychological preparation for corresponding removal of polyps.

Yet, there were some limitations to our study: (1) cross-sectional nature of the research, which could not prove causality; (2) a single-center analysis with ineluctable selective bias; (3) a lack of data of muscle strengthening, which caused failure to diagnosis individuals with sarcopenia; and (4) a lack of data on physical activity/exercise, which mediated the process of low muscle mass and gastric polyps to some extent.

The study was approved by the Institutional Review Board (IRB) of The First Affiliated Hospital of Wenzhou Medical University. Due to its cross-sectional nature, consent was waived by IRB and the data was anonymous. All data was extracted from electronic medical records and analyzed in accordance with the principles of the Declaration of Helsinki.

The Supplementary Material for this article can be found online at: https://www.frontiersin.org/articles/10.3389/fmed.2022.861065/full#supplementary-material

Copyright © 2022 Wang, Chen, Lin and Lin. This is an open-access article distributed under the terms of the Creative Commons Attribution License (CC BY). The use, distribution or reproduction in other forums is permitted, provided the original author(s) and the copyright owner(s) are credited and that the original publication in this journal is cited, in accordance with accepted academic practice. No use, distribution or reproduction is permitted which does not comply with these terms.