University of the Sunshine Coast, Australia

The genus of Pandoraea was first proposed in 2000 following the isolation from the sputum of cystic fibrosis patients (Coenye et al., 2000). Five species were initially assigned to the novel genus namely Pandoraea apista, Pandoraea pulmonicola, Pandoraea pnomenusa, Pandoraea sputorum, and Pandoraea norimbergensis but the description of four new species and another four genomospecies in the subsequent years led to a total of nine species and four genomospecies within the genus of Pandoraea (Daneshvar et al., 2001; Anandham et al., 2010; Sahin et al., 2011). The isolation of Pandoraea spp. from various environmental samples such as water, sludge, and soils have been reported, but to date, only P. pnomenusa, P. apista, P. pulmonicola, and P. sputorum were isolated from clinical specimens such as blood, sputum and bronchial fluid of patients with cystic fibrosis or chronic lung diseases (Coenye et al., 2000; Daneshvar et al., 2001; Stryjewski et al., 2003; Han-Jen et al., 2013). Members of Pandoraea tend to exhibit broad resistance to ampicillin, extended-spectrum cephalosporins, aztreonam, aminoglycosides, and meropenem but they are sensitive to imipenem (Daneshvar et al., 2001; Stryjewski et al., 2003). However, the clinical significance and prevalence of these multi-drug resistant bacteria among patients with cystic fibrosis or respiratory diseases remained unknown since Pandoraea spp. are usually misidentified as Burkholderia cepacia complex, Ralstonia pickettii, or Ralstonia paucula (Segonds et al., 2003). Ambiguity in differentiating between B. cepacia complex, Ralstonia spp. and Pandoraea spp. can be resolved by 16S ribosomal DNA-PCR (Coenye et al., 2001) and gyrB gene restriction fragment length polymorphism (Coenye and LiPuma, 2002) but the limited use of molecular typing methods in routine clinical microbiological laboratory has resulted in the underreporting of Pandoraea spp. in clinical cases.

The first case of mortality due to P. pnomenusa was documented in 2003 whereby the patient developed bacteremia and subsequently died from multiple organ failure after undergoing a bilateral lung transplant operation (Stryjewski et al., 2003). Isolation of P. pnomenusa from purulent secretions collected by bronchoalveolar lavage on postoperative day 10 indicated that the lungs could be the source of infection and the cause of fatality was subsequently established through the repeated isolation of P. pnomenusa from blood cultures on postoperative day 8 and at the time of death (Stryjewski et al., 2003). In a study conducted by Costello et al. (2011), P. pnomenusa was found to be invasive in lung cells expressing cystic fibrosis transmembrane regulator and the species exhibited the greatest level of transepithelial translocation when compared to P. pulmonicola, P. apista, and B. cenocepacia. Reports of Pandoraea -associated bacteraemia and the subsequent isolation of P. pnomenusa from blood culture suggest this species may be highly pathogenic (Daneshvar et al., 2001; Stryjewski et al., 2003; Costello et al., 2011). Furthermore, P. pnomenusa could trigger the accumulation of pro-inflammatory cytokines, particularly interleukins 8 and 6, which could lead to lung tissue damage. Chronic lung inflammation is one of the main causes of fatality in individuals with cystic fibrosis and hence, the ability of P. pnomenusa to elicit the secretion of interleukins 8 and 6 as a part of the host response may serve as one of the mechanisms of pathogenesis for this species (Caraher et al., 2008).

The sheared genomic DNA of P. pnomenusa DSM 16536T was prepared following the “Procedure a Checklist-20kb Template Preparation using BluePippinTM Size Selection” protocol, in which size selection of the constructed SMRTbell templates was performed with a cutoff length of 7kb. Purified and size-selected SMRTbell library was sequenced on four SMRT cells using P5C3 chemistry on Pacific Biosciences (PacBio) Single Molecule, Real-Time (SMRT) RS II instrument. Sub-reads which were generated from the raw sequencing reads after adapter removal were further filtered and mapped prior to de novo assembly using Hierarchical Genome Assembly Process (HGAP) version 3. The polished assembly generated was examined for circularity based on the presence of overlapping sequences at both ends of the contig. Location of the overlapping sequence were determined using Gepard dotplot program (Krumsiek et al., 2007). Subsequently, circularization of the contig was performed by removing one of the overlapping ends to generate a blunt-ended circular assembly yielding a complete genome map.

The genome of P. pnomenusa DSM 16536T consists of a single circular chromosome of 5,389,285bp with a mean genome coverage of 244.62-fold and an average GC content of 64.87% (Table 1). No plasmid was found in the genome sequence of this bacterium. A total of 4811 genes was predicted of which 4586 genes were identified as protein coding genes. There are 88 RNA genes consisting of 12 rRNA (4 5S rRNA, 4 16S rRNA, and 4 23S rRNA) and 65 tRNA genes. Besides GenBank (accession number: CP009553.2; http://www.ncbi.nlm.nih.gov/nuccore/CP009553.2), in which the genome sequences data are available in FASTA, annotated GenBank flat file, graphical and ASN.1 formats, functional annotation results of this genome are also accessible through KEGG resources. 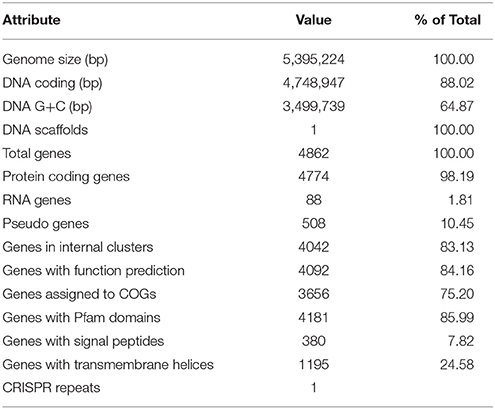 The Supplementary Material for this article can be found online at: https://www.frontiersin.org/article/10.3389/fmicb.2016.00109

Copyright © 2016 Lim, Ee, Yong, Yu, Ang, Tee, Yin and Chan. This is an open-access article distributed under the terms of the Creative Commons Attribution License (CC BY). The use, distribution or reproduction in other forums is permitted, provided the original author(s) or licensor are credited and that the original publication in this journal is cited, in accordance with accepted academic practice. No use, distribution or reproduction is permitted which does not comply with these terms.