In this context, our research group has been investigating different aspects of Q. ilex biology such as natural variation, seed germination and seedling growth, physiology, biotic and abiotic stress-responses, combining classical biochemistry, and integrating those multidisciplinary “omics” analysis (Echevarría-Zomeño et al., 2009, 2012; Jorrín-Novo et al., 2009; Valero-Galván et al., 2011, 2012, 2013; Sghaier-Hammami et al., 2013, 2016; Romero-Rodríguez et al., 2014). Nevertheless, the scarce genomic information (to date) available for Q. ilex, supposes, such as for other orphan tree species (Abril et al., 2011; Jorrín-Novo et al., 2015), a notable obstacle to successfully carry out these global studies at molecular level. Driven by that need, our main aim has been to generate a reference transcriptome of Q. ilex which will support and complement future research within this species. For that purpose, as a first approach we sequenced the mRNA of a pooled plant sample containing equal amounts of homogenized tissue from acorn embryo, leaves, and roots, using an Illumina Hiseq 2500 platform. Contrasting different assembly strategies and algorithms, we present here the first de novo assembled transcriptome of the non-conventional plant Q. ilex.

The pre-processed raw reads generated by the sequencing platform, and used for the de novo assembly, have been deposited at the NCBI SRA database with accession number SRR5815058.

This new genomic resource will set the stage for ongoing and future studies to obtain a better understanding of molecular mechanisms involved in physiological processes such as seed germination, seedling establishment, drought, which are essential for selection of superior phenotypes or Candidate Plus for restoration and reforestation programs under the impending climate change in Mediterranean regions.

Mature acorns from Holm oak (Q. ilex L. subsp. ballota [Desf.] Samp.) were collected from a tree located in Aldea de Cuenca (province of Córdoba, Andalusia, Spain). Acorns were germinated and seedlings grew in a chamber under controlled conditions (a 12 h photoperiod, a temperature of 21 ± 1°C, a relative humidity of 60 ± 5% and an irradiance of 200 μmol m−2 s−1, Echevarría-Zomeño et al., 2009). Germinated embryo, leaves and roots from 1 year plantlets were collected separately, weighted, and individually frozen in liquid nitrogen. The plant material used for RNA sequencing experiments consisted in a pool generated by mixing equal amounts of homogenized tissue from acorn embryo, leaves, and roots.

The raw reads obtained from the sequencing platform were pre-processed in order to retain only high-quality sequences to be subsequently used in the assembly. Thus, each original sequence was quality trimmed considering several parameters (quality trimming based on minimum quality scores, ambiguity trimming to trim off e.g., stretches of Ns, base trim to remove specified number of bases at either 3′ or 5′ end of the reads). The pre-processing parameters used were selected as following: trimming sequences by maximum 2 ambiguous nucleotides), minimum mean quality assuming error probability < 0.01, and filtering out those sequences shorter than 30 nucleotides.

Three different assemblers were employed to de novo assemble the Q. ilex transcriptome, considering there is not a reference genome available, and further evaluated to contrast the results obtained (Figure 1). 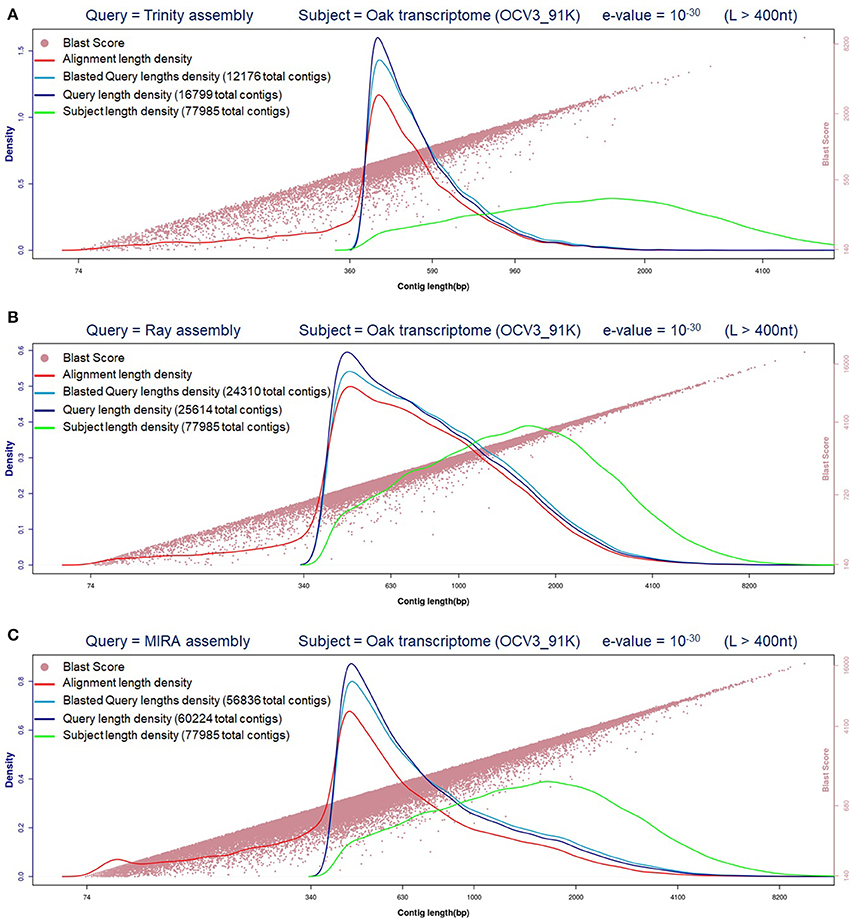 Ray 2.3.1. assembly uses de Bruijn graphs but its framework is not based on the Eulerian steps. Specific subsequences, seeds, are defined, and for each of them, the algorithm extends it to a contig. Heuristics are defined that control the extension process in such a way that the process stops if, at some point, the readings family does not clearly indicate the address of the extension (Boisvert et al., 2010). In this case we selected a k-mer value of 31.

MIRA 4.9.6 software (Chevreux et al., 1999), unlike Trinity and Ray, is based on the strategy known as Overlap /Layout/ Consensus. Following the author guidelines/recommendations for Illumina data, we used the complete raw data without a filtering process like we described previously.

Evaluation of the structure of the generated assemblies was done with the QUAST software (Gurevich et al., 2013).

Evaluation and Annotation of the Assembled Transcriptomes

There are differences between the three assembled transcriptomes in terms of transcriptome architecture/structure. Thus, the N50 value, number of contigs and the average length of the sequences generated by each algorithm differ (Table 1).

Considering these results, we can state that MIRA generated more and longer contigs than RAY and Trinity (MIRA>RAY>Trinity), suggesting that a more robust architecture/structure is obtained by MIRA for the Q. ilex transcriptome assemby. Upon the continuous development of NGS methods, data processing, and transcript assemby remains a main challenge. Several studies have been published devoted to evaluate different de novo assemblers varying in performance and quality in terms of number and length of transcripts and computational speed (Clarke et al., 2013). Besides, it has been reported that the quality of the assembly using a given software depends on the biological sample on study (Bradnam et al., 2013). Thus, these aspects should be taken into consideration when comparing different softwares.

The comparison between the sequences generated from Q. ilex and those available from the close species, oak transcriptome, reveals that MIRA assembly was the one which shared the higher number of transcripts (73073), followed by RAY assembler (Table 1). Besides, MIRA assembly sequences blasted against oak transcriptome render the longest alignment lengths and better blast scores (Figure 1).

Taking into consideration the data and parameters evaluated (Table 1 and Figure 1), we decided to use the MIRA assembly to continue with the corresponding annotation of Q. ilex transcriptome. After blastX was completed against Uni-Prot (Swiss-Prot) curated database (e-value of 10−5), followed by the corresponding mapping process, 31973 annotated sequences were obtained by Blast2GO (Conesa and Götz, 2008).

The pre-processed raw reads of the transcriptome assembly generated by the sequencing platform, and used for the de-novo assembly, have been deposited at the NCBI SRA database with the following accession number SRX2993508 and direct link: ftp://ftp-trace.ncbi.nih.gov/sra/sra-instant/reads/ByRun/sra/SRR/SRR581/SRR5815058/SRR5815058.sra

AM: Collected samples, performed RNA isolation. VG and FA: Bioinformatic analysis of the data. VG, FA, JJ, and AM: Wrote the manuscript. JJ: Supervised the Project and acquired funding.

Copyright © 2017 Guerrero-Sanchez, Maldonado-Alconada, Amil-Ruiz and Jorrin-Novo. This is an open-access article distributed under the terms of the Creative Commons Attribution License (CC BY). The use, distribution or reproduction in other forums is permitted, provided the original author(s) or licensor are credited and that the original publication in this journal is cited, in accordance with accepted academic practice. No use, distribution or reproduction is permitted which does not comply with these terms.