Background: Olfaction is known to be impaired by aging. We hypothesized that insulin-like growth factor-1 (IGF-1) administered at an appropriate dose could prevent age-induced negative effects on olfactory receptor neurons (ORNs). We explored the effects of low- and high-dose administration of IGF-1 on the ORN cell system in aged mice and investigated the involvement of the cellular mechanisms of IGF-1 in the regeneration of ORNs in aged mice.

Methods: We subcutaneously administered recombinant human IGF-1 (rhIGF-1) to 16-month-old male mice over 56 days, and then examined the histological effects of rhGF-1 on cellular composition, cell proliferation, and cell death in the aged olfactory epithelium (OE), by comparing among saline-treated and low- and high-dose rhIGF-1-treated mice.

Conclusion: Our data suggest that in aged mice, IGF-1 administered at an appropriate dose could increase the number of mature ORNs and further human studies may contribute to the development of treatments for aging-related olfactory impairment.

Olfaction is known to be impaired by aging. Aging negatively affects the ORN cell system in the olfactory neuroepithelium (OE) (Ueha et al., 2018a). The OE has a unique regenerative stem-cell system, which is maintained by the life-long replenishment of mature ORNs in the luminal layer from the progenitor cells in the basal layer (Costanzo, 1991; Schwob, 2002; Supplementary Figure S1). In steady-status neurogenesis, primitive olfactory progenitor cells differentiate into late progenitor cells and then differentiate into immature ORNs. A variety of stimuli, such as cytokines, neurotrophins, and growth factors, induce differentiation and maturation of immature ORNs (Buiakova et al., 1996; Nickell et al., 2012; Heron et al., 2013).

Neurotrophins and growth factors have important roles in neuronal differentiation, maturation, and maintenance in the steady-state condition (Fernandez and Torres-Aleman, 2012), and the dose-dependent differential effects of neurotrophins and growth factors have been reported (Tannemaat et al., 2008; Santos et al., 2016). Insulin-like growth factor-1 (IGF-1) is a growth factor that promotes neurogenesis and neuronal growth. Although IGF-1 is mainly produced in the liver and skeletal muscles, it is also generated in the central nervous system, where it plays an important role in the differentiation and maturation of neurons (Nishida et al., 2011; Nieto-Estevez et al., 2016; Pardo et al., 2016). As our previous study showed, reduction in ORN number and cell proliferation in the aged OE reduced gene expression of IGF-1, which may contribute to olfactory impairment during aging (Ueha et al., 2018a). Considering the previous studies, the balance of IGF-1 might be of importance in the regulation of OE homeostasis in the aging population.

We hypothesized that IGF-1 administered at an appropriate dose could restore the aging-induced reduction of ORNs. In the present study, we explored the effects of low-dose and high-dose IGF-1 administration on the ORN cell system in aged mice.

Sixteen-month-old male mice (n = 6 for each group) were used (C57BL/6, purchased from Saitama Experimental Animals, Saitama, Japan). The mice were maintained in a temperature-controlled (24 ± 1°C) environment under a 12-h light-dark cycle (light on from 09:00 to 21:00). Food and water were available ad libitum. All animal experiments were approved by the Animal Care and Use Committee of the University of Tokyo (Approval No. P17-010) and were conducted in accordance with institutional guidelines. 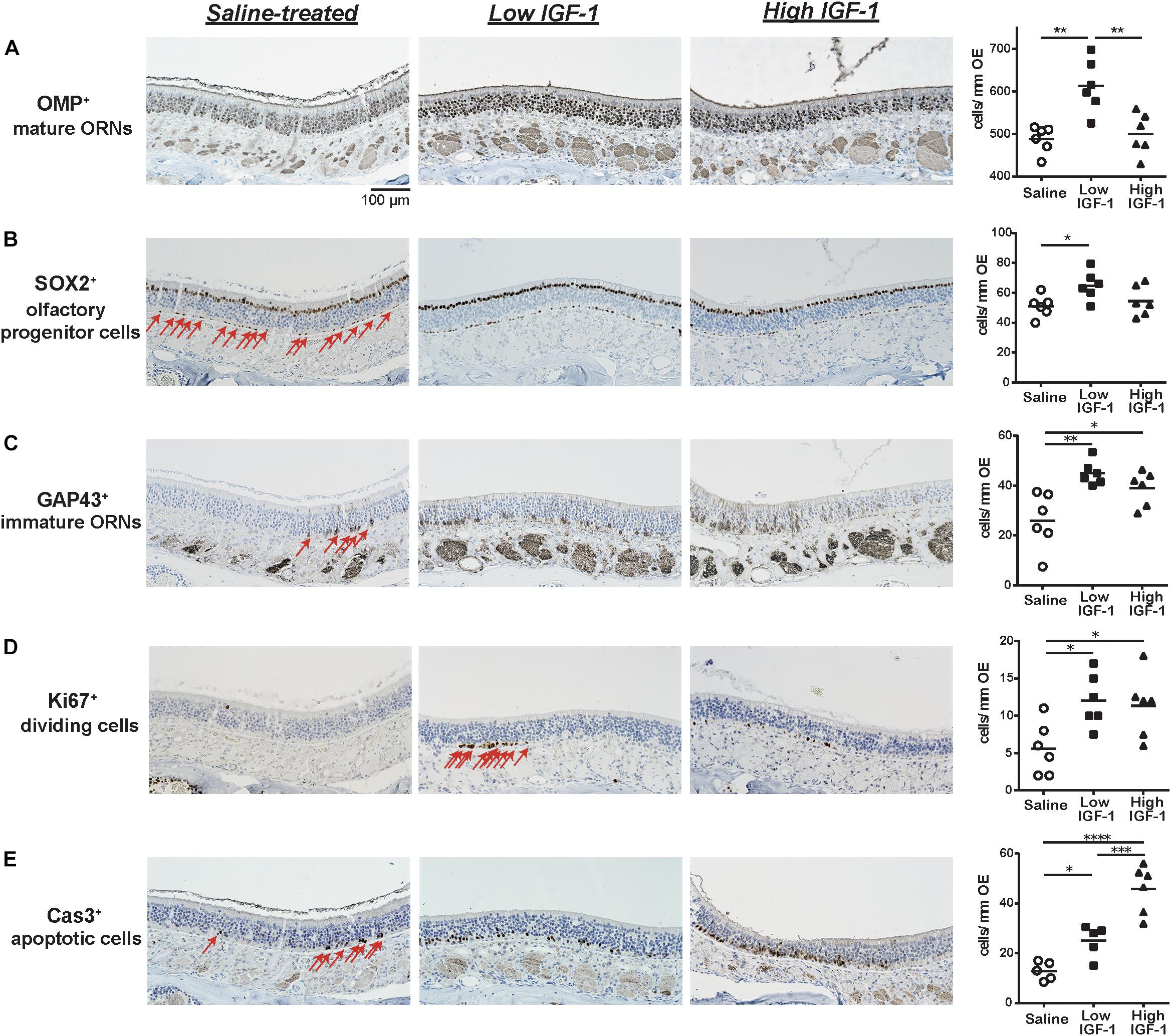 FIGURE 2. Representative images of immunohistological staining (brown) of OMP-positive (OMP+) cells (A), SOX2+ ORN progenitor cells (B), GAP43+ immature ORNs (C), Ki67+ proliferating cells (D), and cleaved Cas3+ apoptotic cells (E). Each cell except for many OMP+ cells is indicated by arrows. Tissue sections were counterstained with the nuclear dye hematoxylin (blue). Numbers of SOX2+ ORN progenitors and Ki67+ actively proliferating cells per mm of the basal layer and OMP+ mature ORNs, GAP43+ immature ORNs, and Cas3+ apoptotic cells per mm of the OE in saline or rhIGF-1-treated mice. Open circles, rectangles, and triangles represent the values for each mouse in the saline, low-IGF-1, and high-IGF-1 treated groups (each n = 6), respectively. The horizontal lines represent the mean value for each group. ∗P < 0.05; ∗∗P < 0.01; ∗∗∗P < 0.001; and ∗∗∗∗P < 0.0001 (one-way ANOVA).

Here, we demonstrated, for the first time, that low-dose rhIGF-1 administration increased the number of OMP+ mature ORNs in the aged OE, but high-dose rhIGF-1 did not have positive effects on the aged OE. These dose-dependent effects of rhIGF-1 on the aged OE may be important for developing treatments for aging-related olfactory dysfunction.

IGF-1 is a growth factor exerting trophic effects on neuronal development and regeneration in the central nervous system and peripheral nervous system (Ishii et al., 1994; Bianchi et al., 2017). IGF-1 activates protein synthesis in neurons, glia, oligodendrocytes, and Schwann cells; stimulates the survival of mature and immature neurons, and promotes the proliferation of neuronal precursors (Devesa et al., 2011; Bianchi et al., 2017), acting neuroprotectively after injury. Thus, IGF-1 controls tissue homeostasis throughout the lifespan via regulation of cell proliferation, survival, and cell death (Kooijman, 2006). Recently, IGF-1 was found to have contradictory effects on the regulation of apoptosis. IGF-1 reportedly prevents the expression of apoptosis-associated genes and inhibits apoptotic programs and pathways (Parrizas et al., 1997; Kang et al., 2003; Fernandez et al., 2004; Vincent et al., 2004), but on the other hand, it is considered to induce apoptosis (Granerus et al., 2001; Raile et al., 2003; Saile et al., 2004; Fu et al., 2007). These different effects may be influenced by the dose, administration route, number of administrations, and the interval between administrations (Santos et al., 2016; Bianchi et al., 2017). IGF-1 secretion decreases and the effects of IGF-1 on tissues alter with aging (Obermayr et al., 2005; Apel et al., 2010; Bianchi et al., 2017). Therefore, it is reasonable to consider that IGF-1 plays an important role in the prevention and treatment of many neurological diseases such as olfactory and neurodegenerative disorders and hearing loss and IGF-1 therapies at an appropriate dose could provide significant benefits for aged individuals. How IGF-1 acts on OE homeostasis remains unclear. However, considering that IGF-1 and the IGF-1 receptor (IGF-1R) are expressed in the OE and the olfactory bulb (Scolnick et al., 2008; Lee et al., 2018) and IGF-1 is transported to the olfactory bulb via the olfactory nerve-related nasal transport (Shiga et al., 2014), systemic administration of IGF-1 may directly and indirectly influence the OE.

Considering that the reduction in mature ORN numbers is associated with olfactory impairment in the aged population (Ueha et al., 2018b), IGF-1 administered at an appropriate dose could prevent aging-induced negative effects on ORNs. However, because our results were only obtained from mouse studies, care should be taken regarding IGF-1 application for the treatment of human olfactory impairment. Further studies are required to investigate the application of IGF-1 treatment to humans and to determine the appropriate dose of adequate intervals between IGF-1 administrations for the treatment of olfactory deterioration in aged individuals, and to assess the effects of IGF-1 administration on wellness and quality of life.

The data that support the findings of this study are available from the corresponding author, RU, upon reasonable request.

This research was supported by a Japan Society for the Promotion of Science Grant-in-Aid for Scientific Research (Grant Nos. 24791749, 16KT0190) and by the Smoking Research Foundation (Tokyo, Japan).

The Supplementary Material for this article can be found online at: https://www.frontiersin.org/articles/10.3389/fnagi.2018.00385/full#supplementary-material

FIGURE S1 | A,B: Representative images of the olfactory epithelium (OE) from untreated mice (hematoxylin and eosin stain; A, 40× magnification; B, 400× magnification). The box in A indicates the region of the OE shown in B,C: Diagram of cell lineage of olfactory receptor neurons (ORN).

Copyright © 2018 Ueha, Kondo, Ueha and Yamasoba. This is an open-access article distributed under the terms of the Creative Commons Attribution License (CC BY). The use, distribution or reproduction in other forums is permitted, provided the original author(s) and the copyright owner(s) are credited and that the original publication in this journal is cited, in accordance with accepted academic practice. No use, distribution or reproduction is permitted which does not comply with these terms.