Objectives: Recent studies regarding the relationships between plasma amyloid-β (Aβ) levels and cognitive performance had inconsistent results. In this study, we aimed to characterize the relationship between cognitive decline and plasma Aβ levels in a large-sample cognitively normal population.

Conclusion: The relationship between plasma Aβ40 and cognitive decline was not linear, but an inverted-U shape in a cognitively normal population. The underlying mechanism requires further investigation.

In order to rapidly identify patients with cognitive decline earlier, and therefore delay the occurrence of AD, the present study aimed to determine the change in cognitive status, its relationship with plasma Aβ, and the type of association, during a 2-year follow-up in a cognitively normal population. This study also investigated whether this association was altered by sex, age, education level, or Apolipoprotein E (APOE) genotype, and estimated the relationship between plasma Aβ and cognitive disorder and cardio-cerebrovascular diseases during a 2-year follow-up.

Participants were enrolled from a village in the suburbs of Xi’an city, located in northwestern China, between October, 2014 and November, 2015. This study was a community population cohort study in which each interviewee received a face-to-face questionnaire. Participants were asked about detailed history by neurologists, and received a nervous system examination, a systemic physical examination, blood biochemical examination aimed at determining whether there were any related neurological diseases. All patients with cerebral disease had received the CT or MRI scans. For patients who had a diagnosis of mild cognitive impairment (MCI) or dementia due to AD, we provided free MRI scan to confirm the diagnosis of AD in a local designated hospital. Inclusion criteria was that participants were (1) older than 40 years and (2) a current resident of the village and had lived there for more than 3 years. Exclusion criteria was that (1) the Mini-Mental State Examination (MMSE) was not completed; (2) there was evidence of MCI or dementia, or (3) other neurological conditions that may influence cognitive function (such as epilepsia, central nervous system infections, essential tremor, Parkinsonism, anxiety, depression, thyroid hypofunction, intracranial trauma, or surgery); (4) plasma Aβ was not measured; and (5) other baseline information was missing. This study was approved by the First Affiliated Hospital of Xi’an Jiaotong University. Written informed consent was obtained from all participants.

The MMSE was conducted as global cognitive screening at enrollment. The MMSE, other neurological, physical and imaging examinations were assessed at baseline and repeated 2 years later. Cutoff values were ≤ 17 for subjects with illiteracy, ≤20 for primary school educated subjects, and ≤ 24 for those educated at the junior high school level or above (Bohm et al., 2015). After initial screening, study participants with MMSE score ≤ these cutoff values underwent the 2nd phase cognitive examinations, including the Fuld Object Memory Evaluation test, Rapid Verbal Retrieval test, Trail-Making test, Digit Span test, and Block Design test. Finally, combining all the available imaging and clinical information, the diagnosis and subtype of dementia and MCI were determined according to international diagnostic criteria for dementia (American Psychiatric Association [APA], 2000) and Petersen MCI criteria (Petersen, 2011) by a panel of senior clinicians. The diagnosis of AD was based on NINCDS-ADRDA criteria (McKhann et al., 2011).

The primary outcome was cognitive decline, which was defined as the difference of MMSE between the first visit and the second visit > 0. Cognitive disorder was defined as MMSE score ≤ 17 for illiterate, ≤ 20 for primary school educated, and ≤ 24 for junior high school educated or above (Katzman et al., 1988). New cardiovascular and cerebrovascular diseases were defined as incident cardiovascular and cerebrovascular diseases during the 2-year follow-up.

Restricted cubic splines with a logistic regression model were applied to test the relationship between cognitive decline and Aβ levels, and to evaluate the type of correlation of cognitive decline with Aβ levels. Four knots defined at the 5th, 35th, 65th, and 95th percentiles of Aβ levels were prespecified (Harrell, 2001). The reference point was the mean value of Aβ levels. Aβ categories were based on the type of relationship between cognitive decline, and Aβ levels suggested in restricted cubic splines. A series of pre-planned categories of Aβ levels were tested, defined by tertiles and interquartiles. The differences in MMSE scores between baseline and 2 years later were compared with the paired t-test.

To assess the association between Aβ levels (categorical and continuous) and various outcomes, unadjusted, age- and sex-adjusted, and multivariable-adjusted logistic regression models were used. A multivariable linear regression model was used to evaluate the relationship between Aβ and 2-year MMSE score change. In multivariable models, adjustments were made for age, sex, diabetes, hypertension, smoking, lack of physical activity, APOE ε4 status, and education. In subgroup analyses, we examined the relationship between Aβ40 and cognitive decline by sex, age (≤ 65 and > 65 years), education (≥ high school and < high school), and APOE ε4 status in multivariable-adjusted logistic regression models. SPSS ver. 24.0 and R ver. 3.5.3 were used for statistical analysis. A p < 0.05 was considered significant.

Characteristics of the Study Population at Baseline

The study population screening process is shown in Figure 1. There were 2,173 individuals examined from October, 2014 to November, 2015. A total of 138 participants did not complete the MMSE, 58 had MCI or dementia, 112 had neurologically-related diseases, 470 did not undergo plasma Aβ tests, 131 had missing baseline information, and 24 did not complete the follow-up MMSE. Finally, 1,240 participants were included in our study. 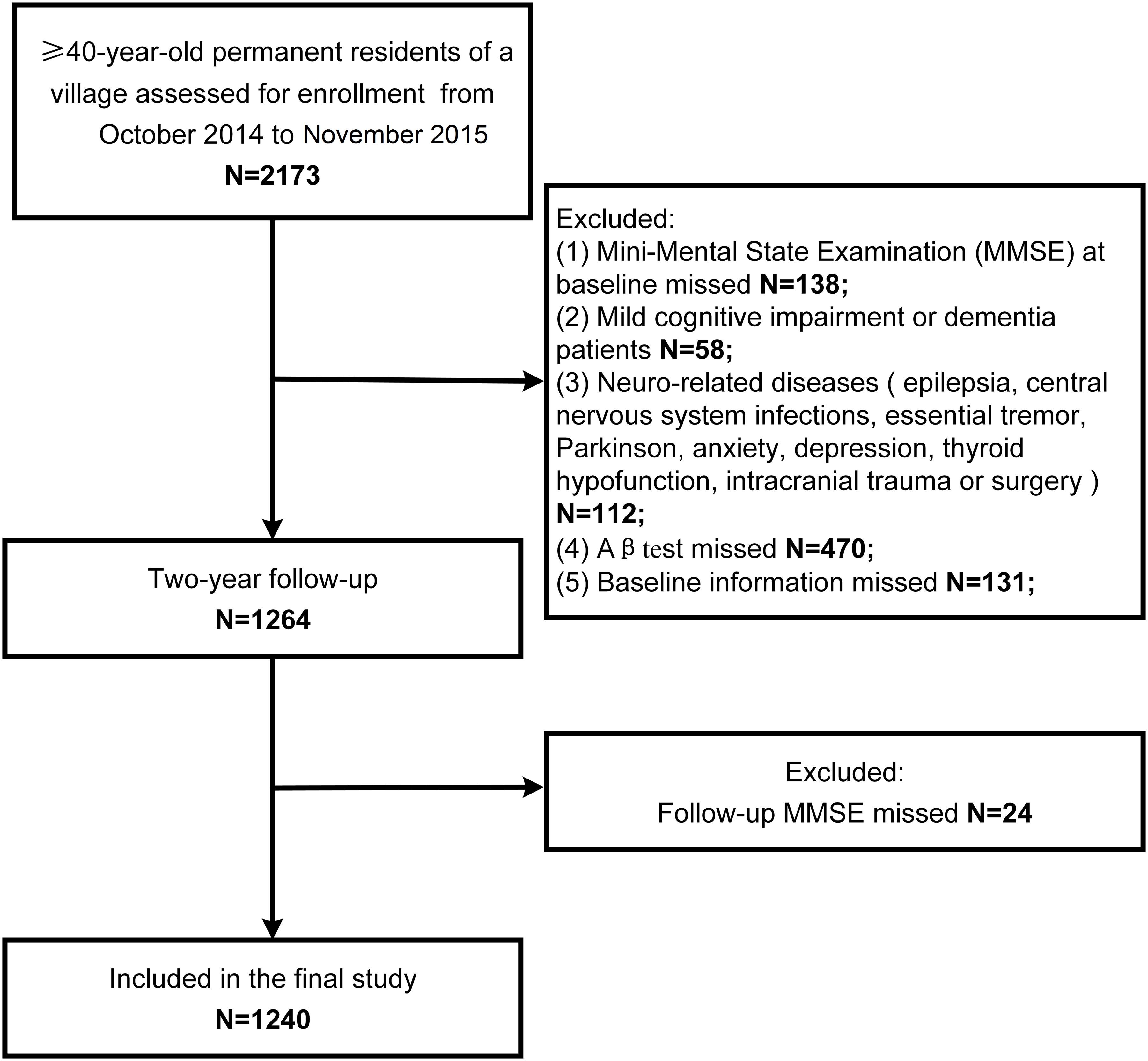 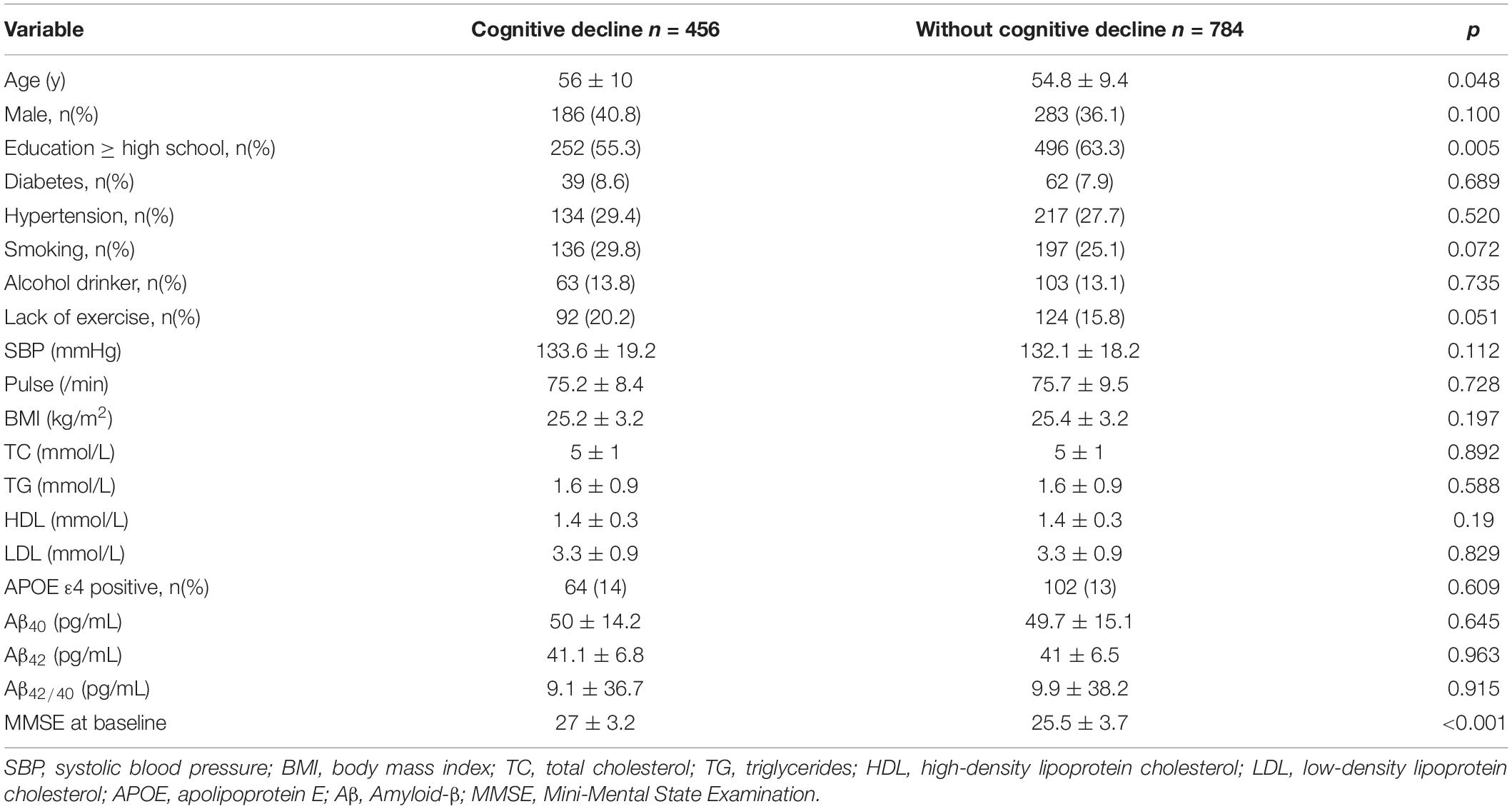 The associations between continuous Aβ40, Aβ42, Aβ42/40 levels and cognitive decline were listed in Table 2. After multivariable adjustment, none of three biomarkers reached statistical significance (all p > 0.05).

Figure 3. The changes of cognitive function during 2 year follow-up. 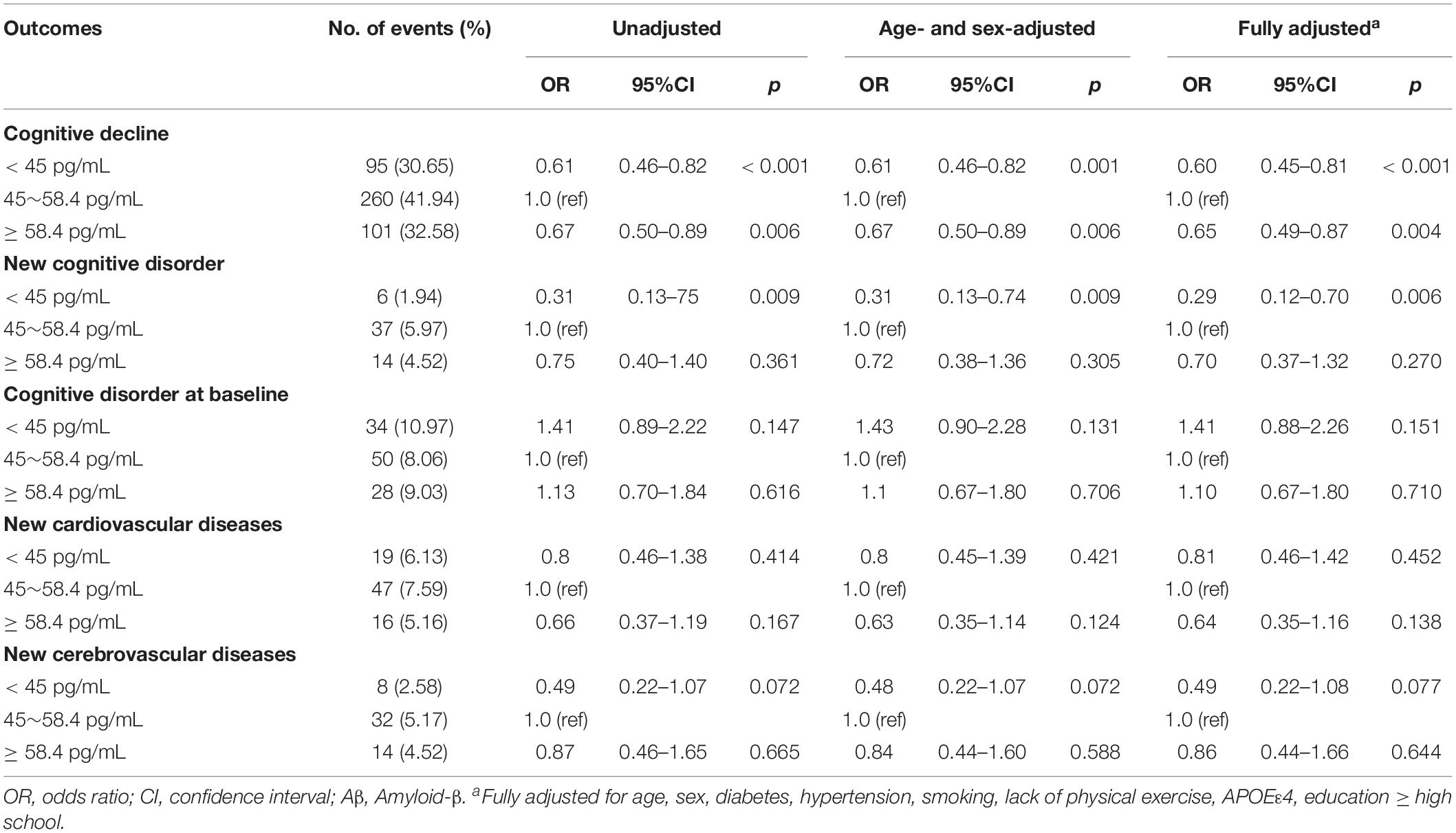 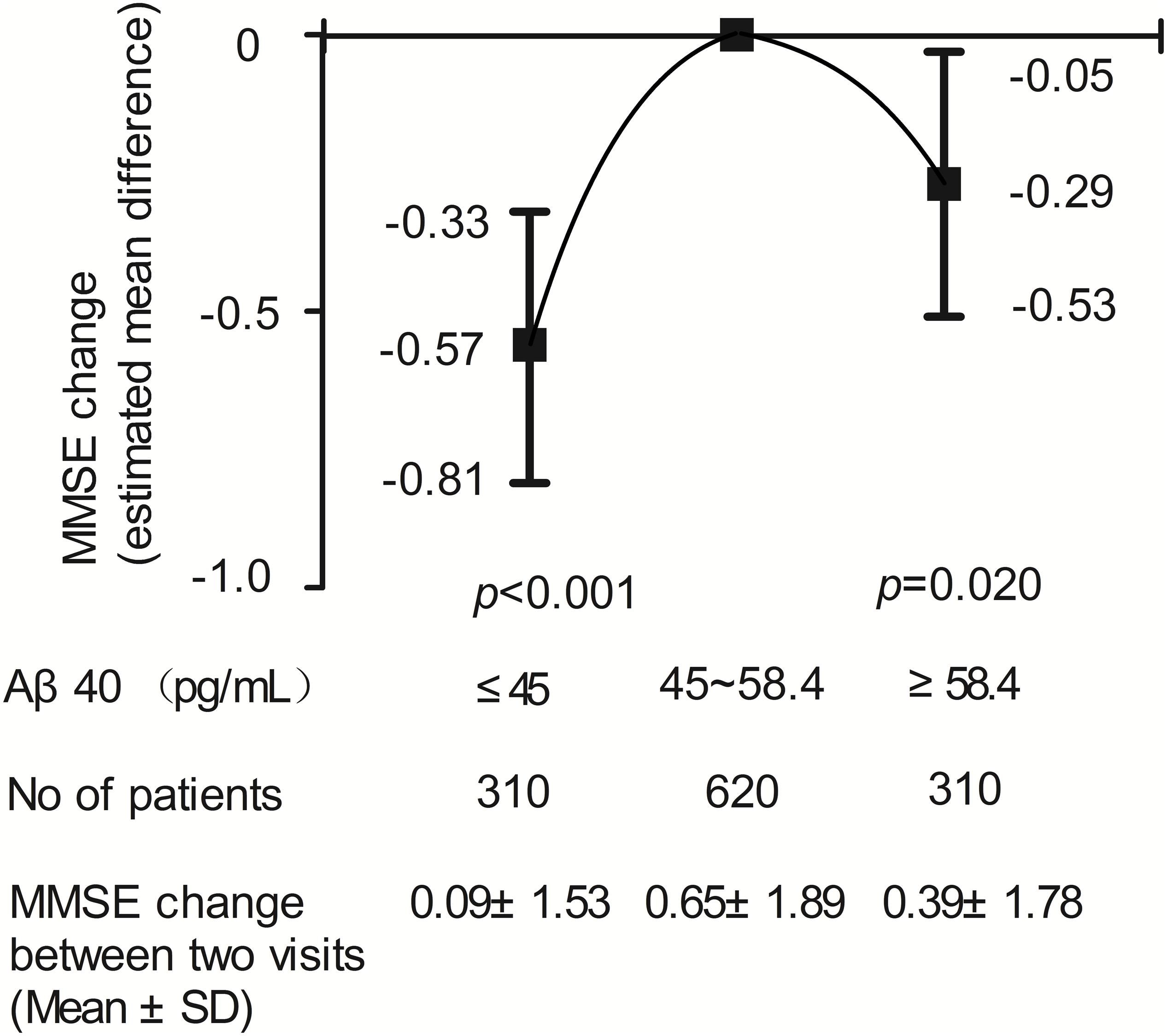 Subgroup Analyses of the Relationship Between Plasma Aβ40 and Cognitive Decline 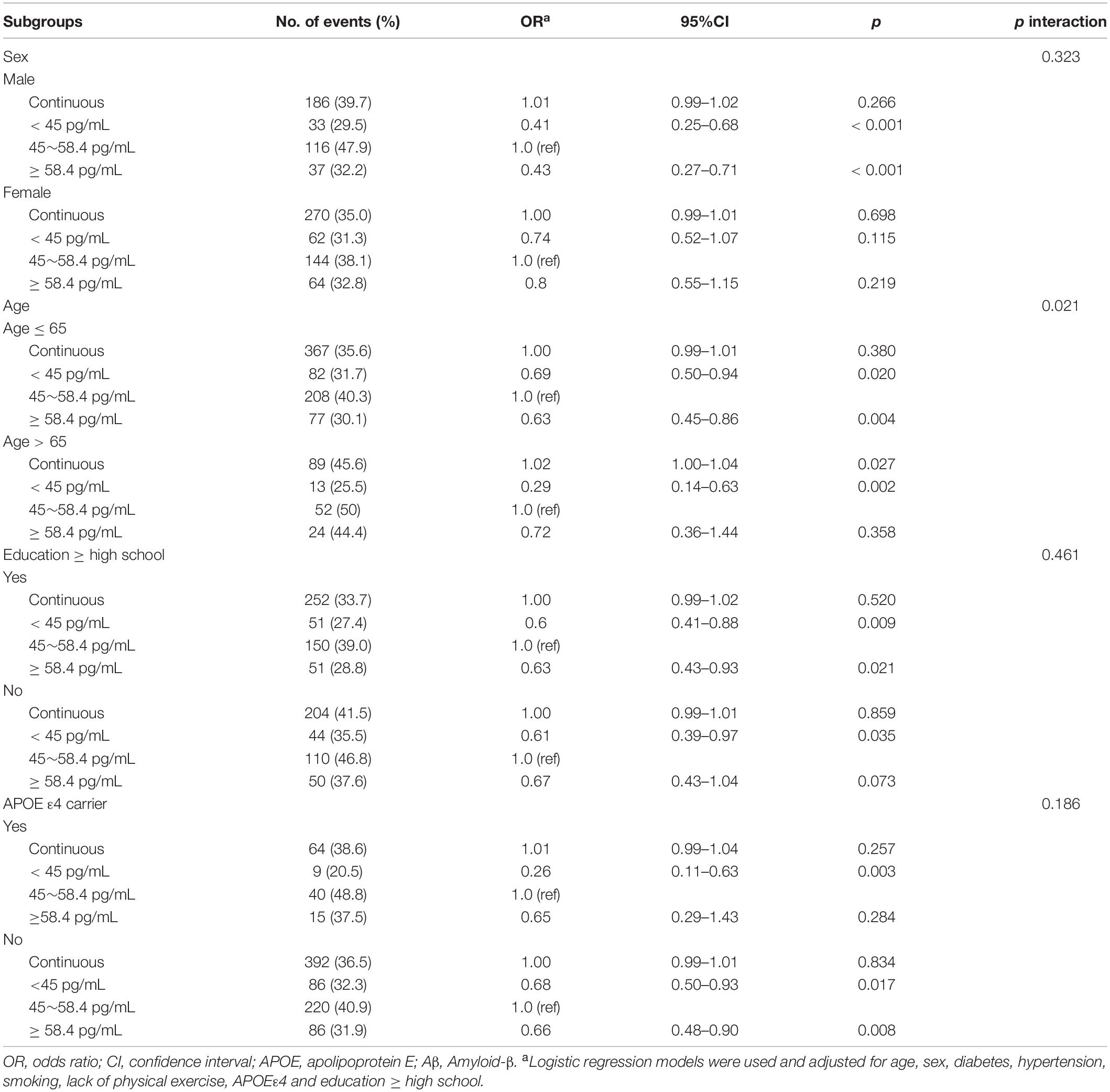 In this large, prospective, population-based cohort study, we found an inverted U-shaped relationship between plasma Aβ40 and cognitive decline during a 2-year follow-up in individuals with normal cognition. People with medium plasma Aβ40 concentrations (45–58.4 pg/mL) had the highest risk of cognitive decline than persons with plasma Aβ40 < 45 pg/mL and ≥ 58.4 pg/mL.

The precise mechanisms underlying the relationship between plasma Aβ40 and cognitive decline remain unclear. There may be both of neurodegenerative and cerebrovascular pathologies promoting cognitive impairment in the study participants (Greenberg et al., 2020). Aβ40 was reported to be associated with the development of vascular dementia as well as AD (Hansson et al., 2012). Compared with moderate plasma Aβ40 group, higher plasma Aβ40 level may indicate more Aβ efflux from the brain to the peripheral blood and fewer deposition in brain. Therefore, the cognitive decline in the high plasma Aβ40 group may be slower. Besides, although the concentration of Aβ40 measured in peripheral blood was not high in the moderate Aβ40 group, the deposit of Aβ40 in the wall of vessels may be relatively high, which was involved with the development of vascular dementia. Compared with moderate Aβ40 group, low concentration of plasma Aβ40 may suggest increased degradation of Aβ40 by peripheral tissues, such as liver and kidney and decreased production of Aβ40 from brain and peripheral tissues (Kaffashian et al., 2015). It could reflect favorable condition of blood vessels, liver and kidney, which was significant to maintain normal cognitive function.

The characteristics of Aβ40 is different with Aβ42. Aβ40 is more soluble than Aβ42, which can diffuse along perivascular drainage pathways to deposit in the walls of vessels, while Aβ42 tends to retained in the brain parenchyma and initiate insoluble plaque nucleation (Greenberg et al., 2020). In addition, Aβ40 is produced or degraded by peripheral tissues as well as Aβ40 produced and deleted in the brain (Kaffashian et al., 2015). Plasma Aβ40 may be not a direct surrogate marker for cerebral Aβ40, which can’t reflect Aβ40 and Aβ42 metabolism in the brain (Sonnen et al., 2008). Accordingly, the effect of Aβ40 on the physiologic process of dementia may be more complicated than Aβ42. Because this study is a community-based cohort study, which failed to measure the liver and kidney function comprehensively, nor did it assess the deposition of Aβ in the brain parenchyma and vascular wall. The mechanisms of plasma Aβ40 affecting cognitive performance still needs further studies.

There are still limitations that need to be considered. First, only the total MMSE score was evaluated for every participant in this study; sub-items of MMSE and other cognitive scores should be included to confirm cognitive decline. Second, ELISA is not the most sensitive technique for assessing plasma Aβ levels. Recent studies have employed single-molecule array or hybrid mass spectrometry techniques which may be more accurate approaches than ELISA (Nakamura et al., 2018; Vergallo et al., 2019). Nevertheless, ELISA is suitable for epidemiological studies with large sample size because of simple operation and cheapness. Third, the correlation of plasma Aβ40 with CSF Aβ40 and brain Aβ40, and the mechanism of transportation and clearance of Aβ40, were not studied. It would be useful to explore the dynamic transportation mechanism of Aβ40 between the brain and peripheral blood in future studies, in order to verify the present results.

This population-based, prospective cohort study showed that the relationship between plasma Aβ40 and cognitive decline is not linear, but an inverted-U shape, in a cognitively normal population. Medium concentration of plasma Aβ40 is associated with a greater risk of cognitive decline, compared with low and high levels of plasma Aβ40, primarily in younger persons (≤65 years old). The underlying mechanism needs to be further elucidated.

The studies involving human participants were reviewed and approved by the ethics committee for medical research at the First Affiliated Hospital of Xi’an Jiaotong University. The patients/participants provided their written informed consent to participate in this study.

This work was supported by the Nature Science Foundation of China (No. 81771168), the Key Research & Development Programs of Shaanxi Province (No. 2018ZDXM-SF-052), and the Clinical Research Award of the First Affiliated Hospital of Xi’an Jiaotong University, China (No. XJTU1AF-CRF-2018-008).

We are thankful for the cooperation of all participants in our study.

The Supplementary Material for this article can be found online at: https://www.frontiersin.org/articles/10.3389/fnagi.2020.557005/full#supplementary-material

Copyright © 2020 Gao, Shang, Chen, Dang, Gao, Wei, Wang, Huo, Deng, Wang and Qu. This is an open-access article distributed under the terms of the Creative Commons Attribution License (CC BY). The use, distribution or reproduction in other forums is permitted, provided the original author(s) and the copyright owner(s) are credited and that the original publication in this journal is cited, in accordance with accepted academic practice. No use, distribution or reproduction is permitted which does not comply with these terms.

Translational Advances in Alzheimer's, Parkinson's, and other Neurodegenerative Dementias