Methods: We examined the cross-sectional and longitudinal associations between OA and structural neuroimaging markers (hippocampal volume, entorhinal volume, ventricular volume, and volume of gray matter of the whole brain) among non-demented older people. We categorized our participants as those without OA (OA−) and those with OA (OA+). At baseline, we included 1,281 non-demented older adults, including 1,050 without OA and 231 with OA.

Results: In the cross-sectional analysis, we did not observe any significant difference in structural neuroimaging markers between the two OA groups. In the longitudinal analysis, we found that compared to participants without OA, those with OA showed a steeper decline in volumes of the gray matter of the whole brain among non-demented older adults.

Conclusions: OA was associated with a steeper decline in volumes of the gray matter of the whole brain over time among non-demented older people.

Osteoarthritis (OA) is a common and debilitating joint disorder that contributes to functional impairment among older people (Hunter and Bierma-Zeinstra, 2019). The precise pathogenesis of OA remains largely unknown, though inflammation is thought to play an important role in the progression of OA (Hunter and Bierma-Zeinstra, 2019). For example, substantial evidence suggests that proinflammatory factors are involved in the development of disease (Staite et al., 1990; Ghivizzani et al., 1997; Lawlor et al., 2001). Interestingly, a previous retrospective population-based cohort study indicated that OA is also an independent risk factor for developing dementia (Huang et al., 2015). Further, a recent meta-analysis supported a link between OA and an increased risk of dementia (Weber et al., 2019). However, the mechanism through which OA increases the risk of dementia and cognitive impairment remains unclear.

Cerebral atrophy assessed on structural MRI is a valid marker of Alzheimer’s disease (AD) dementia (Mckhann et al., 2011). In addition, rates of change in several brain regions, such as entorhinal cortex (Cardenas et al., 2011), hippocampus (Jack et al., 2004), ventricular enlargement (Ridha et al., 2008), and whole-brain (Sluimer et al., 2010), have been reported to be associated with changes in cognitive performance, further suggesting that these brain regions are valid markers of disease progression. However, no previous studies have attempted to examine the association of OA with changes in these structural neuroimaging markers.

In the current study, at baseline, we examined the cross-sectional relationships between OA and several structural neuroimaging markers among non-demented older adults. Further, linear mixed models were conducted to examine the association of OA with changes in structural neuroimaging markers over time among non-demented older adults.

Data utilized in the present study were extracted from the ADNI database1. The ADNI study has been described in detail elsewhere (Weiner et al., 2015). In brief, the ADNI aims to examine the progression of cognitive decline among MCI and mild AD patients using a variety of variables, including demographics, cognitive assessments, neuroimaging variables, and fluid biomarkers. In the present study, we included 1,281 non-demented older adults at baseline. We further categorized our participants into two groups based on their OA status: OA− group (n = 1,050) and OA+ group (n = 231). The OA status was reported by participants based on their medical history. At ADNI sites, local institutional review boards approved the study procedures, and participants provided written informed consent.

In total, we included 1,281 non-demented older adults, including 415 individuals with normal cognition and 866 individuals with mild cognitive impairment (MCI). Individuals with normal cognition had a Clinical Dementia Rating (CDR; Morris, 1993) score of 0 and a Mini-Mental State Examination (MMSE; Folstein et al., 1975) score between 24 and 30. Individuals with MCI had a CDR score of 0.5, an MMSE score between 24 and 30, an objective memory impairment as evaluated by delayed recall scores of the Wechsler Memory Scale Logical Memory II, and an absence of clinical dementia. All the available data were used in this study.

The structural MRI data were extracted from the ADNI database. The procedure of neuroimaging analysis has been described in detail elsewhere (Jack et al., 2010). Four structural MRI markers were included in our analysis: hippocampal volume, entorhinal volume, ventricular volume, and volume of the gray matter of the whole brain. To adjust for the sex difference in head size (Sundermann et al., 2016), several transformations were made:

• In the current analysis, the neuroimaging data were extracted from the file “ADNIMERGE” on the ADNI website.

T-tests and x2 tests were used to examine differences in demographical variables and clinical variables between the two OA groups (OA− vs. OA+). Specifically, for continuous variables (age, education, ADAS-Cog 13, HVR, EVR, VVR, and WVR), t-tests were used to compare the difference between two groups, while x2 tests were used to compare the categorical variables between two groups (gender, APOE4 genotype, and MCI diagnosis). In addition, to examine the association of the OA status at baseline with changes in cognition and MRI markers over time, linear mixed models were conducted. All models included OA status, age, APOE4 genotype, gender, education, as well as their interactions with time. Every model also included a random intercept for each subject. Q-Q plots of residuals of our linear mixed models did not suggest any strong deviations from normality. All statistical work was conducted using R statistical software (version: 4.0.0; Team, 2013). The significance level was set at p < 0.05.

Demographics and Clinical Characteristics by the OA Status

At baseline, we included 1,281 non-demented older adults, including 1,050 without OA and 231 with OA. As displayed in Table 1, we did not find any significant differences in demographics and clinical variables (age, gender, education, APOE4 genotype, MCI diagnosis, ADAS-Cog 13, HVR, EVR, VVR or WVR, all p > 0.05). There were missing values in our variables (HVR, EVR, VVR, and WVR) due to the quality or availability of MRI scans, resulting in varying numbers of participants used in our subsequent analyses (Table 1). 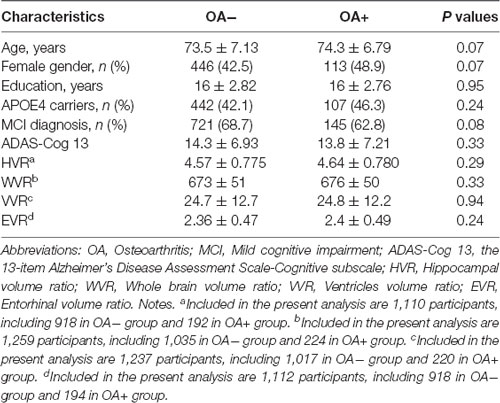 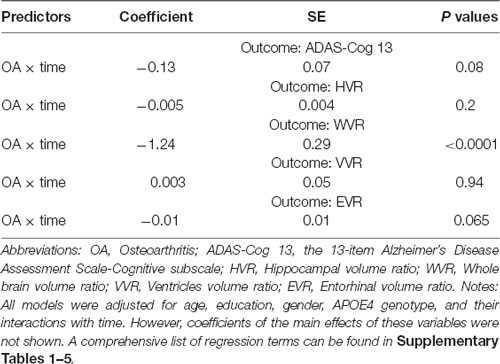 Table 2. Association of OA status with changes in ADAS-Cog 13 and neurodegenerative markers over time among non-demented older people. 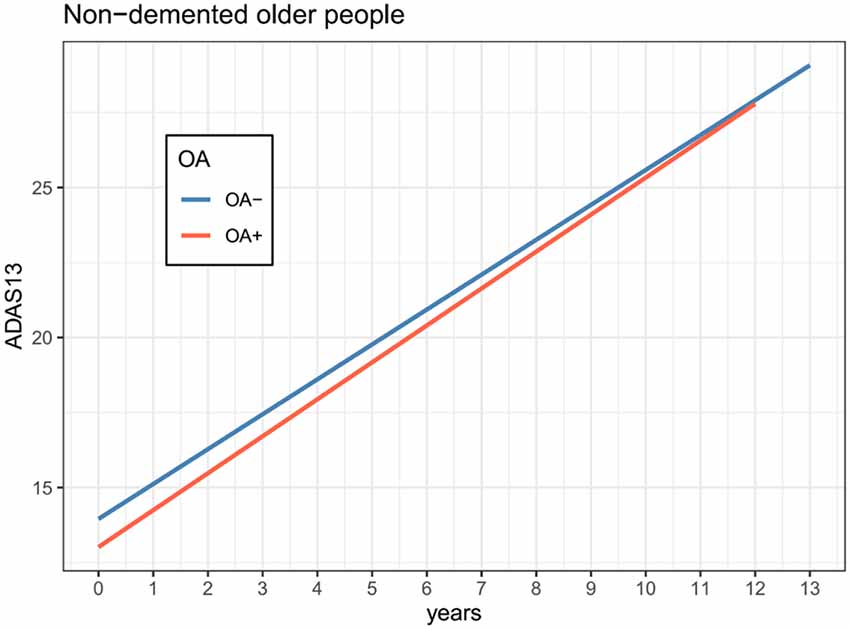 Figure 1. Association of OA status with changes in cognition over time among non-demented older adults. The OA status was not associated with the change in ADAS-Cog 13 over time among non-demented older adults (coefficient = −0.13, p = 0.08). Abbreviations: OA, Osteoarthritis; ADAS-Cog 13, the 13-item Alzheimer’s Disease Assessment Scale-Cognitive subscale. 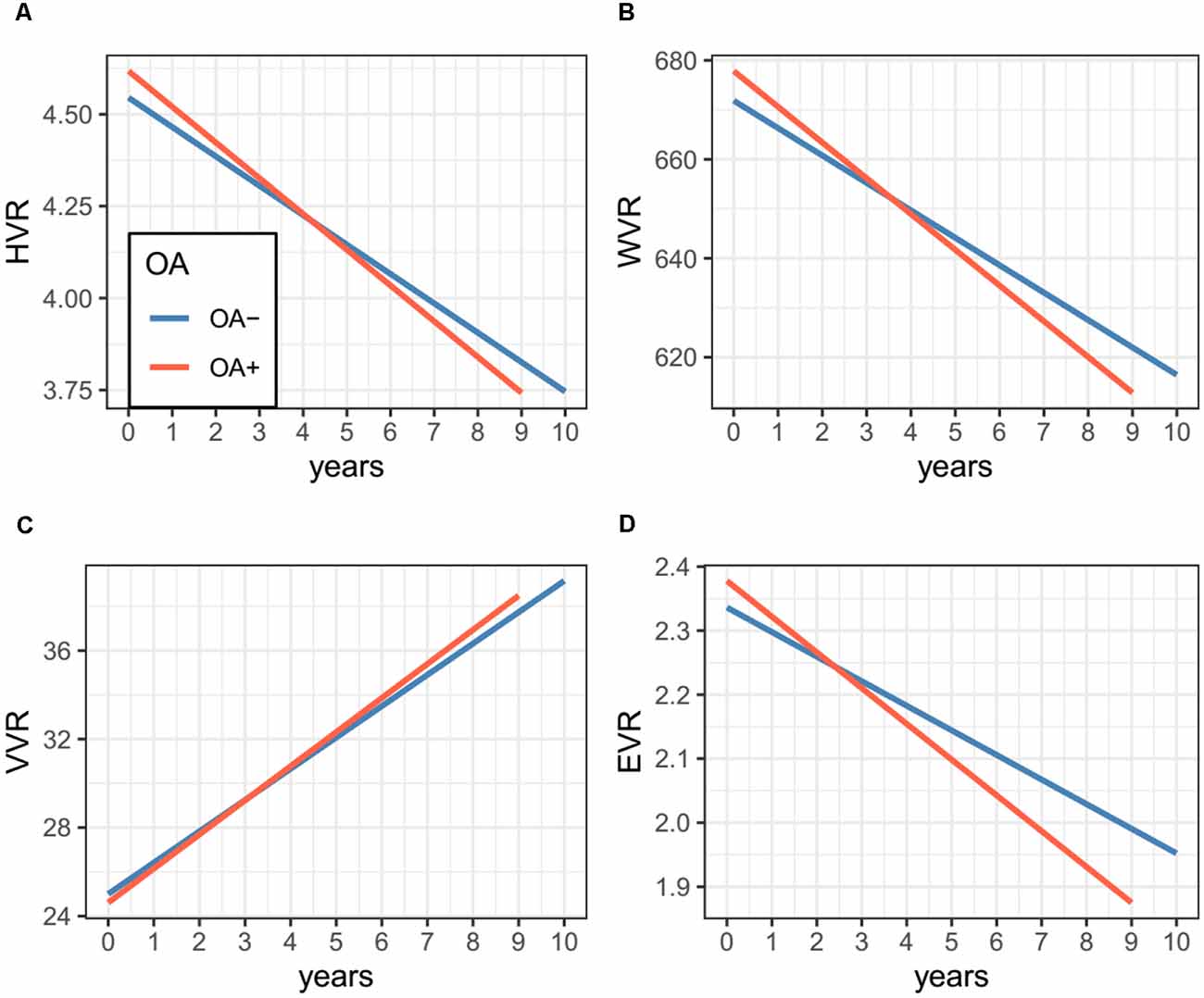 In the present study, the dropout rate was high after the 4th year of follow up visit. To test the robustness of our results, we additionally conducted a supplementary analysis and restricted our analysis to those with follow-up duration ≤4 years. The association of OA status with change in WVR was still significant (Table 3).

Table 3. Association of OA status with change in WVR over time among non-demented older people with the duration of follow up ≦ 4 years.

In the current study, we examined the cross-sectional and longitudinal association of the OA status with cognitive performance and several structural neuroimaging markers among non-demented older adults. In the cross-sectional analysis, no significant difference in ADAS-Cog 13 or structural neuroimaging markers was observed, suggesting that these outcome measures were similar between the two group at baseline. In the longitudinal analysis, linear mixed models showed that OA status was associated with the change in volumes of the gray matter of the whole brain, but not ADAS-Cog 13, hippocampal volume, entorhinal volume, or ventricular volume.

The precise mechanisms underlying this association remain unknown, though there are several possible mechanisms that may accelerate the reduction of brain volumes in subjects with OA. First, it is possible that peripheral inflammatory cytokines induced by OA may trigger neuroinflammation, which leads to the accumulation of AD pathologies and neurodegeneration. For instance, in an animal study, Kyrkanides and colleagues suggested that induction of OA and peripheral inflammation contributes to the progression of neuroinflammation and the deposition of AD pathology (Kyrkanides et al., 2011). Further, systemic inflammation induced by LPS could lead to the release of inflammatory cytokines in the brain that promotes cognitive decline and neurodegeneration (Cunningham et al., 2005, 2009). Second, it is possible that the association of OA with changes in brain volumes may be mediated by other factors. For instance, patients with OA demonstrate a reduced level of physical activity, which has been reported to be associated with a higher risk of developing dementia and decline in volumes of several brain regions (Buchman et al., 2012; Blondell et al., 2014; Erickson et al., 2014).

Several potential limitations should be addressed. First, we categorized our participants into two OA groups (OA− vs. OA+) based on the self-report of OA history, which may lead to some misclassifications in both groups. In future studies, the diagnosis of OA should be based on standardized diagnostic criteria. Second, given the nature of our study design, we could not provide any evidence on causation according to our findings. Third, participants in the ADNI study represent a convenience sample, which may limit our ability to generalize our findings to other populations. Finally, the associations of OA with changes in ADAS-Cog 13 and EVR were marginally significant, indicating that there was a tendency towards an effect. Therefore, further studies are needed to replicate and validate our results.

In conclusion, OA was associated with a steeper decline in volumes of the gray matter of the whole brain over time among non-demented older people.

The datasets presented in this article are not readily available because the ADNI data utilized in the current study are publically accessible. For more infomation, please visit: adni.loni.usc.edu.

LW performed the statistical analysis, drafted this article, and interpreted the data. XW contributed to data collection, literature search, and statistical analysis. YY critically revised this article. CL was involved in the design of this study and supervised this project. All authors contributed to the article and approved the submitted version.

The Supplementary Material for this article can be found online at: https://www.frontiersin.org/articles/10.3389/fnagi.2021.664443/full#supplementary-material.

Copyright © 2021 Wu, Wang, Ye and Liu. This is an open-access article distributed under the terms of the Creative Commons Attribution License (CC BY). The use, distribution or reproduction in other forums is permitted, provided the original author(s) and the copyright owner(s) are credited and that the original publication in this journal is cited, in accordance with accepted academic practice. No use, distribution or reproduction is permitted which does not comply with these terms.

† Data used in preparation of this article were obtained from the Alzheimer's Disease Neuroimaging Initiative (ADNI) database. As such, the investigators within the ADNI contributed to the design and implementation of ADNI and/or provided data but did not participate in analysis or writing of this report. A complete listing of ADNI investigators can be found at http://adni.loni.usc.edu/wp-content/uploads/how_to_apply/ADNI_Acknowledgement_List.pdf