Department of Translational Research and New Technologies in Medicine and Surgery, University of Pisa, Italy

A commentary on
Commentary: Analysis of SUMO1-conjugation at synapses

Wilkinson et al. (2017) commented in this forum on a study of ours (Daniel et al., 2017), in which we report that the evidence for SUMO1-conjugation at synapses and of several synaptic proteins is equivocal. We present here—due to length restrictions—an abbreviated version of a response to Wilkinson et al. that appeared in the comments section of our original publication (Daniel et al., 2017).

Validity of the His6-HA-SUMO1-KI Model

Use of Wild-Type Material in Our Analyses

Wilkinson et al. state that “Most of the experiments reported by Daniel et al. use a knock-in (KI) mouse that expresses His6-HA-SUMO1 in place of endogenous SUMO1,” overlooking our analyses in WT mice. In fact, we immunopurified Zbtb20, synapsin-1, gephyrin, GluK2, RIM1, and syntaxin-1A from WT mouse brain and assessed the input and immunoisolated proteins by Western blotting using antibodies against the different proteins. Zbtb20 exhibited unequivocal evidence of protein species with molecular weight shifts that likely represent SUMO-conjugation. No candidate synaptic proteins exhibited an apparent molecular weight shift indicative of SUMO-conjugation in WT (or His6-HA-SUMO1-KI) samples (Daniel et al., 2017). Because these experiments did not allow us to determine whether SUMO-conjugation is due to SUMO1, SUMO2, or SUMO3, our data also address the criticism by Wilkinson et al. that we did not examine SUMO2/SUMO3-conjugation. Moreover, we did not focus on SUMO2/SUMO3 because most previous synaptic SUMOylation studies focused on SUMO1—except studies on mGluR7 (Choi et al., 2016) and gephyrin (Ghosh et al., 2016). Wilkinson et al. also mention that we did not use WT material in our analyses of candidate SUMO1-conjugated proteins in subcellular brain fractions, which we have now addressed (see below).

Wilkinson et al. cite publications reporting the presence of SUMO1, SUMO1-conjugated proteins, and/or components of the SUMOylation machinery in synapses as assessed by immunolabeling of cells and tissue or Western blot analyses of subcellular brain fractions. These studies involved anti-SUMO1 antibodies that Wilkinson et al. refer to as “validated.” However, these anti-SUMO1 antibodies were never validated by using SUMO1-KO samples as negative control. This is a major omission, particularly given the many different fixation, permeabilization, and staining protocols used.

Large-scale studies indicate that only ~50% of commercially available antibodies can be used to reliably assess protein distribution in tissue (Baker, 2015). Correspondingly, we show (i) that “synaptic” signals generated with a “validated” anti-SUMO1 antibody in cultured WT neurons show no significant difference to SUMO1-KO samples, and (ii) that most of the anti-SUMO1-positive bands in synaptic fractions of mouse brain are equally evident in His6-HA-SUMO1-KI and SUMO1-KO samples (Zhang et al., 2008; Daniel et al., 2017). These data indicate that the anti-SUMO1 antibody generates non-specific signals that can be erroneously interpreted as synaptic SUMO1-conjugation. This conclusion is supported by the fact that anti-SUMO1 immunolabeling in neuronal dendrites is punctate in some studies (Martin et al., 2007; Konopacki et al., 2011; Loriol et al., 2013; Craig et al., 2015) and relatively homogeneous in others (Kantamneni et al., 2011; Craig et al., 2012; Ghosh et al., 2016). We note that Wilkinson et al. cite a paper by Hasegawa et al. (2014) in the context of evidence for synaptic localization of SUMO1-conjugates. The authors demonstrate that SUMO1, SUMO2, and SUMO3 immunoreactivity is present in the nuclei of many cell types throughout the brain (Hasegawa et al., 2014), but did not employ antibodies against synaptic markers and did not make claims about SUMO-immunoreactivity at synapses.

Wilkinson et al. mention the low SUMO1 signal intensity in nuclei of WT and His6-HA-SUMO1-KI neurons. We acknowledge that the nuclear anti-SUMO1 immunolabeling is 20–30% higher in WT neurons than in His6-HA-SUMO1-KI neurons, as we previously noted (Tirard et al., 2012; Daniel et al., 2017). In some previous studies (e.g., Gwizdek et al., 2013; Jaafari et al., 2013) images of anti-SUMO1 immunolabeling are saturated, which we wanted to avoid. In our experiments, we made a considerable effort to recapitulate the methods of immunolabeling of previous studies to eliminate a methodological basis for the differences between our observations and previous studies. Due to the large number of images acquired per neuron we also used minimal laser power to prevent bleaching. 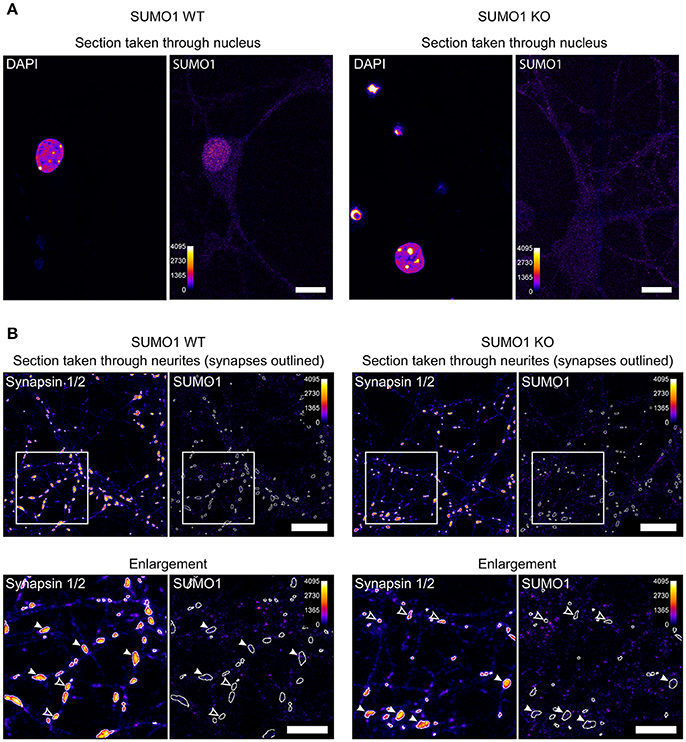 Regarding our Western blot analyses of brain subcellular fractions, Wilkinson et al. argue that we should have used WT mice and not His6-HA-SUMO1-KI mice to compare to the SUMO1-KO samples, presumably because WT mice have a ~20–30% higher overall SUMO1-conjugation level than His6-HA-SUMO1-KIs. What Wilkinson et al. do not acknowledge is that our analysis shows that anti-SUMO1 signals in synapses of cultured neurons and in synaptic subcellular fractions are equally well detected in SUMO1-KO samples, indicating that they are of a non-specific nature (Daniel et al., 2017). Nevertheless, we generated new subcellular fractions from WT and SUMO1-KO brains, and assessed them by Western blotting with six different anti-SUMO1 antibodies. The corresponding data (Supplementary Figure 1) show that (i) anti-SUMO1 antibodies exhibit non-specific cross-reactivity with proteins in SUMO1-KO samples, (ii) there is little correspondence between datasets obtained with the different antibodies, and (iii) the vast majority of protein bands that are detectable in WT synaptic fractions by these anti-SUMO1 antibodies are equally detectable in synaptic SUMO1-KO fractions. These observations stress the requirement of KO controls and demonstrate that the evidence for SUMO1-conjugated proteins in synaptic fractions is equivocal.

Wilkinson et al. state that the SUMOylation of many synaptic proteins has been functionally “validated,” and criticize that our experiments were confined to immunolabeling and Western blotting analyses. We did not examine the functional consequences of SUMO1-conjugation of candidate synaptic proteins because we did not obtain evidence that these proteins were SUMO1-conjugated. Furthermore, we felt that the standard functional analyses of SUMO1-conjugation are not really helpful for the resolution of the current controversy. In general, some proposed function of the WT form of a given protein is typically compared to a variant in which a proposed SUMO-conjugated lysine residue is mutated to abolish SUMO-conjugation. Under optimal conditions, this functional comparison is conducted on a background where the expression of the endogenous protein is blocked. However, it is impossible to be certain that functional consequences of the lysine mutation are specifically due to the blockade of SUMOylation because the mutation might have SUMOylation-independent consequences, e.g., by affecting protein structure, interactions, or other post-translational modifications. This problem is aggravated when WT and lysine-mutant variants of proteins are overexpressed and/or compared in a WT background. Thus, in cases where the in vivo SUMOylation of a given protein and the identity of a given SUMOylation site are equivocal, the functional consequences of a corresponding lysine mutation must be interpreted carefully.

Wilkinson et al. allege that a key flaw in our analyses of GluK2 SUMOylation is “that the C-terminal anti-GluK2 monoclonal rabbit antibody used does not recognize SUMOylated GluK2 because its epitope is masked by SUMO conjugation.”

While this might be a relevant point, we did not see it raised or systematically addressed in any paper. Further, it is difficult to deduce why the antibody we used (i.e., MerckMillipore rabbit monoclonal anti-GluK2 antibody NL9; rmAb-MerckMillipore-NL9) might not recognize SUMOylated GluK2. We assume, based on the time of publication and corresponding information in the corresponding methods text, that the anti-GluK2 antibody used in the first study to detect SUMO1-conjugated GluK2 (Martin et al., 2007) was Upstate rabbit polyclonal anti-GluK2 antibody 06/309 (rpAb-Upstate-06/309). This antibody, which has been discontinued, was raised against a lysine-linked peptide representing the C-terminal 15 amino acids residues of rat GluK2 (Lys-HTFNDRRLPGKETMA). rmAb-MerckMillipore-NL9 was raised against the exact same sequence of the C-terminus of rat GluK2 (linked to keyhole limpet hemocyanin, KLH) as rpAb-Upstate-06/309 (i.e., KLH-HTFNDRRLPGKETMA). Given that the two antibodies relevant in this controversy were raised against exactly the same C-terminal GluK2-sequence, which is proximal to but does not include the proposed SUMO1-conjugation site K886, it is not apparent why SDS-denatured, SUMO1-conjugated GluK2 should be readily detectable on Western blots by rpAb-Upstate-06/309 but not by rmAb-MerckMillipore-NL9.

We maintain that the His6-HA-SUMO1-KI mouse line is a reliable and useful tool for the localization and identification of SUMO1-substrates, particularly when used alongside WT and SUMO1-KO mice, and further contend that the role of SUMO1-modifications in the function of synaptic proteins and synapses remains—at least—unclear. We published our study (Daniel et al., 2017) to highlight discrepancies in the published record and to encourage activities toward a consensus set of criteria based on which SUMO-conjugation of a candidate protein can be verified in neurons in vivo. Using landmark studies in other areas of SUMO biology for guidance, we proposed such a set of criteria in our study (Daniel et al., 2017). We expect that adherence to these criteria, along with the development of genetically engineered mice that allow the unequivocal mass spectrometric identification of SUMO-conjugated peptides in proteolytic digests of proteins from mouse brain, subcellular brain fractions, or purified protein fractions, will ultimately resolve the present controversy.

All animal experiments were performed in accordance with the guidelines for the welfare of experimental animals issued by the State Government of Lower Saxony (33.9-42502-04-13/1359), Germany, in compliance with European and NIH guidelines.

The Supplementary Material for this article can be found online at: https://www.frontiersin.org/articles/10.3389/fncel.2018.00117/full#supplementary-material

Copyright © 2018 Daniel, Cooper, Palvimo, Zhang, Brose and Tirard. This is an open-access article distributed under the terms of the Creative Commons Attribution License (CC BY). The use, distribution or reproduction in other forums is permitted, provided the original author(s) and the copyright owner are credited and that the original publication in this journal is cited, in accordance with accepted academic practice. No use, distribution or reproduction is permitted which does not comply with these terms.