Objective: SHROOM4 gene encodes an actin-binding proteins, which plays an important role in cytoskeletal architecture, synaptogenesis, and maintaining gamma-aminobutyric acid receptors-mediated inhibition. SHROOM4 mutations were reported in patients with the Stocco dos Santos type of X-linked syndromic intellectual developmental disorder (SDSX; OMIM# 300434). In this study, we investigated the association between SHROOM4 and epilepsy.

Methods: Trios-based whole-exome sequencing was performed in a cohort of 320 cases with idiopathic generalized epilepsy or idiopathic partial epilepsy. Protein modeling was used to assess the damaging effects of variations.

Results: Six hemizygous missense SHROOM4 variants, including c.13C > A/p. Pro5Thr, c.3236C > T/p.Glu1079Ala, c.3581C > T/p.Ser1194Leu, c.4288C > T/p.Arg1430Cys, c.4303G > A/p.Val1435Met, c.4331C > T/p.Pro1444Leu, were identified in six cases with idiopathic epilepsy without intellectual disability. All patients presented with features of generalized seizures or generalized discharges. These hemizygous variants had no or extremely low allele frequencies in controls and showed statistically higher frequency in the case cohort than controls. All variants were predicted to alter hydrogen bond with surrounding amino acids or decreased protein stability. The SHROOM4 variants reported in patients with SDSX were mostly destructive or duplicative variants; in contrast, the SHROOM4 variants were all missense variants, suggesting a potential genotype-phenotype correlation. The two missense variants associated with SDSX were located in the middle of SHROOM4 protein, whereas variants associated with idiopathic epilepsy were located around the N-terminal PDZ domain and the C-terminal ASD2 domain.

SHROOM4 gene (OMIM* 300579) (also known as KIAA1202 gene) resides on Xp11.22 and encodes a member of the actin-binding proteins of shroom family (Hagens et al., 2006), which contain a PDZ and an ASD2 domain. The SHROOM4 protein is broadly distributed, including the brain and predominantly during embryonic and adult period. SHROOM4 and members of this protein family have been shown to localize at the cytoskeleton, and play a role in neurulation, cellular architecture, actin remodeling, ion channel function, and synaptogenesis (Hagens et al., 2006; Zapata et al., 2017). SHROOM4 mutations have been demonstrated to be associated with Stocco dos Santos type of X-linked syndromic intellectual developmental disorder (SDSX; OMIM# 300166) (Froyen et al., 2007; Honda et al., 2010; Armanet et al., 2015; Farwell et al., 2015). Knockdown of SHROOM4 in rat severely impairs gamma-aminobutyric acid (GABA) receptors activity causing increased anxiety-like behavior and susceptibility to seizures (Zapata et al., 2017). However, the relationship between SHROOM4 gene mutations and epilepsy is not determined.

In this study, we performed trio-based whole-exome sequencing (WES) in a cohort of patients with idiopathic epilepsy. Six novel hemizygous missense variants of SHROOM4 were identified in six unrelated cases with epilepsy with generalized seizures or generalized discharges on electroencephalography (EEG). To understand the mechanism of phenotypic variation, we analyzed the genotype-phenotype correlation and the sub-regional effect of SHROOM4 variants.

A total of 320 cases (trios) with epilepsy without acquired causes (idiopathic epilepsies) were recruited in this study from the Epilepsy Center of the Second Affiliated Hospital of Guangzhou Medical University in China between January 2013 and December 2020. The complete pedigree and clinical data of the probands were collected, including age, gender, age of seizure onset, type, course, and frequency of seizure, family history, therapy, prognosis, general and neurological examination, long-term video EEG, and brain magnetic resonance imaging (MRI). Epilepsy syndromes and epileptic seizures were diagnosed according to the criteria of the Commission on Classification and Terminology of the ILAE (1981, 1989, 2001, 2010, and 2017). Idiopathic generalized epilepsy were diagnosed based on a range of seizure types including absence, spasms, myoclonus, clonic, atonic, tonic, and tonic-clonic seizures, supported by typically generalized discharges on EEG. Idiopathic partial epilepsy had partial seizures and features of bilateral discharge or tendency of generalized discharge. EEG examinations showed focal abnormalities with features of idiopathic epilepsies, including shifting, bilateral, or multiple focal discharges with normal backgrounds. Patients with acquired causes were excluded. All subjects were followed up for at least one year.

This project was approved by the Ethics Committee of the Second Affiliated Hospital of Guangzhou Medical University and was conducted according to the guidelines of the International Committee of Medical Journal Editors regarding patients’ consent for research or participation. Written informed consent was obtained from the patients and their legal guardians.

To evaluate the genotype–phenotype correlation, SHROOM4 variants were systematically reviewed through PubMed database and human gene mutation database up to December 2021.

IBM SPSS Statistics 19 was used for statistical analysis. Fisher’s exact test was applied to access the allele frequencies of SHROOM4 variants in the cohort of this study and the control populations, and the proportions of missense variants between epilepsy and intellectual disability. A p value of < 0.05 was considered to be statistically significant.

Figure 1. Genetic data of cases with SHROOM4 variants. (A) Pedigrees of the six cases with SHROOM4 mutations and their corresponding phenotypes. (B) DNA sequence chromatogram of the SHROOM4 mutations. Arrows indicate the positions of the mutations. (C) The amino acid sequence alignment of the six missense mutations shows that the residues Pro5, Glu1079, Ser1194, Arg1430, Val1435, and Pro1444 are highly conserved across species.

Table 1. Clinical features of the individuals with SHROOM4 variants.

Table 2. Analysis of the aggregate frequency of SHROOM4 variants identified in this study.

All SHROOM4 variants identified in this study were predicted to be damaging by one of the silico tools (Supplementary Table 1). Protein sequence alignment indicated that five of six variants are located at residues that are highly conserved across species (Figure 1C). The Arg1430 was less conserved but was predicted to be conserved by GERP (score = 4.15) and phyloP (score = 2.907) (Supplementary Table 2). None of the six affected patients had pathogenic or likely pathogenic variants in genes known to be associated with epileptic phenotypes (Wang et al., 2017). 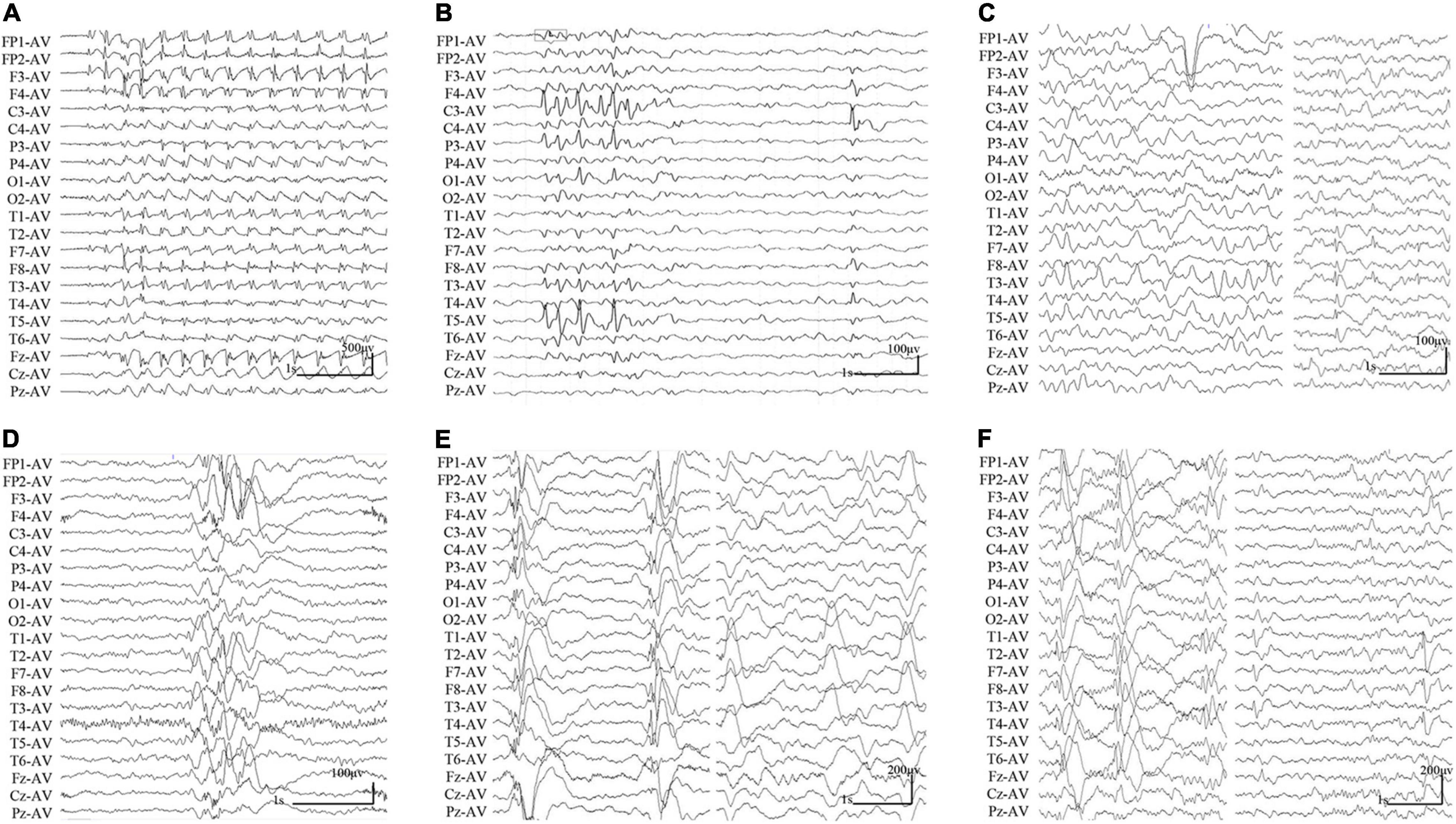 Molecular and Molecular Sub-Regional Effects of the SHROOM4 Variants

The SHROOM4 protein contains two evolutionarily conserved domains, i.e., an N-terminal PDZ domain, and a C-terminal ASD2 domain (Hagens et al., 2006; Yoder and Hildebrand, 2007). In the present study, variant Pro5Thr was located in the N-terminal PDZ domain, while Glu1079Ala, Ser1194Leu, Arg1430Cys, Val1435Met, and Pro1444Leu were located in or near to the C-terminal ASD2 domain (Figure 3A). 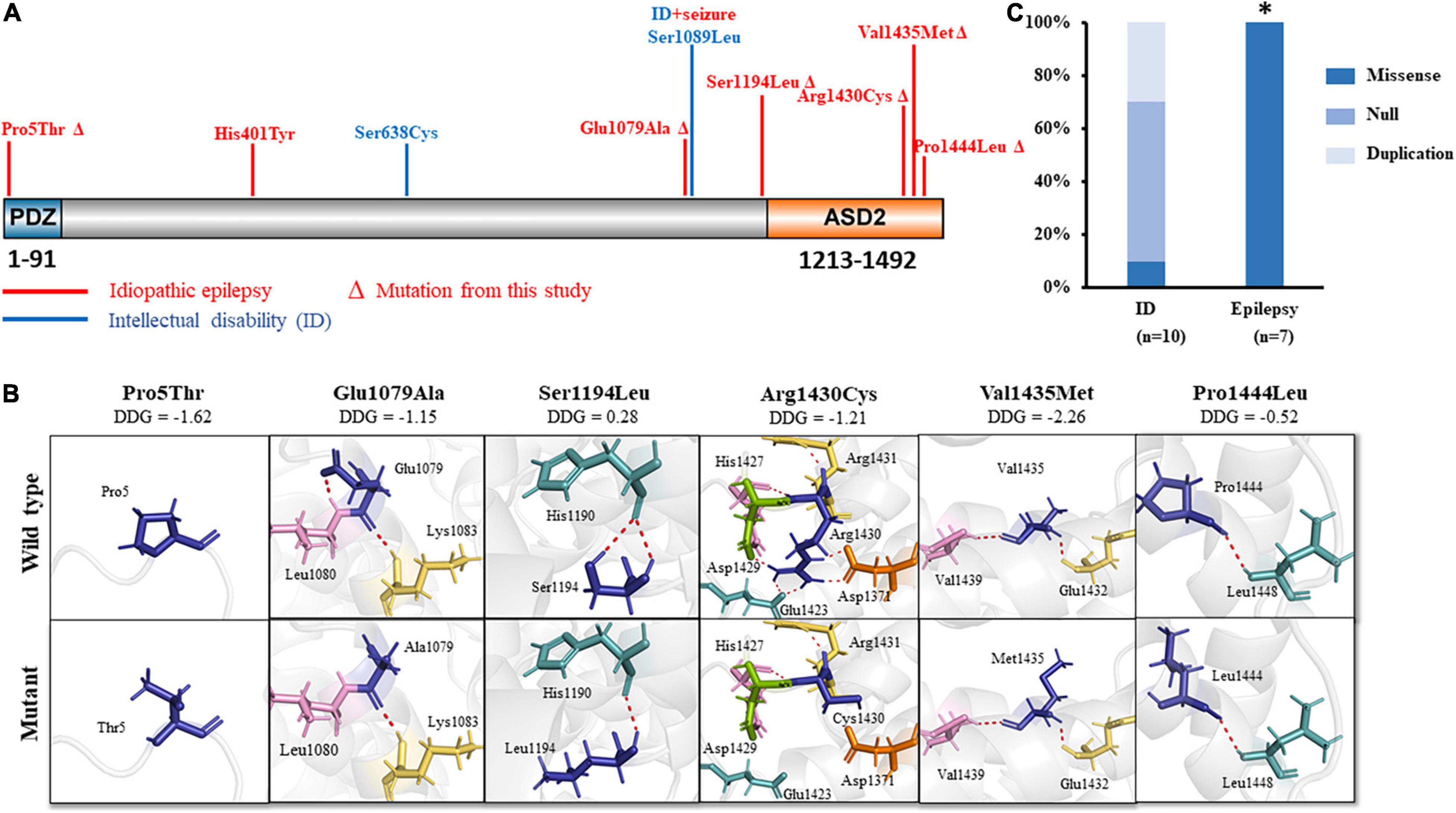 Figure 3. Schematic illustration of SHROOM4 variants. (A) Linear schematic of missense SHROOM4 mutations and their locations on SHROOM4 protein. Mutations associated with epilepsy were shown in red color. Mutations associated with ID were shown in blue. ΔThe mutation was found in this study (B) Changes of hydrogen bonds and free energy change value (DDG) of the mutations. (C) The proportion of missense mutations in epilepsy and ID. *The proportion of missense mutations in epilepsy is significantly higher than that in ID.

The other three variants, including Pro5Thr, Pro1444Leu, and Val1435Met, have no changed in hydrogen bonds, but they were predicted to decrease the protein stability significantly (ΔΔG values < −0.5 kcal/mol) (Figure 3B).

SHROOM4 gene encodes an actin-binding proteins, which plays an important role in cytoskeletal architecture, synaptogenesis, and maintaining GABAB receptor-mediated inhibition. Hemizygous missense variants were identified in six cases with idiopathic epilepsy without intellectual disability (Figure 1A). All patients presented with features of generalized seizures or generalized discharges. These hemizygous variants had no or extremely low allele frequencies in controls and showed statistically higher frequency in the case cohort than controls (Table 2). All variants were predicted to alter hydrogen bond with surrounding amino acids or decreased protein stability. This study suggests that SHROOM4 is potentially a candidate causative gene of X-link epilepsy with features of generalized seizures or generalized discharges.

The SHROOM4 gene is widely expressed in the brain2. It plays a critical role in regulating dendritic spine morphology and controls the cell surface expression and intracellular trafficking of GABAB receptor (Zapata et al., 2017), which inhibit neuronal activity through G protein-coupled second-messenger systems (Euro, 2014; Yoo et al., 2017). In rat, Shrm4 were found to influence hippocampal excitability by modulating tonic inhibition in dentate gyrus granule cells. Knockdown of Shrm4 cause increased susceptibility to seizures (Zapata et al., 2017). Previously, a study identified a hemizygous missense variant in a family with ID and seizures (Hagens et al., 2006). Recently, a missense variant with unknown origin was also found in a male with MAE (Routier et al., 2019). However, the relationship between SHROOM4 mutations and epilepsy remains uncertain. In this study, we identified six novel hemizygous missense variants in six unrelated cases with idiopathic epilepsy but without ID, suggesting that SHROOM4 is potentially a candidate gene of epilepsy.

SHROOM4 gene encodes a member of the Shroom family, which contains an N-terminal PDZ domain and a C-terminally positioned motif termed ASD2 (Hagens et al., 2006; Yoder and Hildebrand, 2007). The PDZ domain interacts with C terminus of GABAB receptors, while the ASD2 domain is capable of inducing myosin II-dependant changes in cell shape. The central portion of the protein appears to be an actin targeting sequence and mediated Shrm4 localization (Yoder and Hildebrand, 2007). The current data demonstrated that two missense variants located in or closed to N-terminal PDZ domain were associated with generalized epilepsy; two missense variants located in the middle of protein were associated with ID, one of which was located near to C-terminal ASD2 domain and associated with epilepsy (Hagens et al., 2006; Farwell et al., 2015); missense variants located in or near to C-terminal ASD2 domain were associated with epilepsy with both focal and generalized seizures or discharges. These evidences suggested a possible molecular sub-regional effect of SHROOM4 variants, as that in several genes reported previously (Wang et al., 2018; Liu et al., 2020; Tang et al., 2020). However, further studies are required to determine the function details of each region and their association with different phenotypes.

This study has several limitations. Knockdown, i.e., LOF of Shrm4, in rat resulted in severely impaired synaptogenesis and reduced GABAB receptor-mediated inhibition, causing susceptibility to seizures. The probability of being LOF intolerant (pLI) score was high for SHROOM4 (pLI = 0.997), suggesting that SHROOM4 is intolerant to LOF variants. However, the specific mechanism of epileptogenesis of the SHROOM4 variants remains unknown; and further experimental studies are required to determine the functional consequence of the variants. Additionally, although these missense variants were associated with generalized epilepsy, the patients presented different epilepsy syndromes. The mechanism of phenotype variation warrants further studies.

In conclusion, we identified six novel SHROOM4 hemizygous missense variants in epilepsy patients with features of generalized seizures or generalized discharges. Further analysis revealed that a potential genotype-phenotype correlation and sub-regional molecular implication of SHROOM4 variants. This study potentially extends the spectrum of diseases phenotype associated with SHROOM4 variants and helps to understand the mechanisms of phenotypic variation.

The studies involving human participants were reviewed and approved by the Ethics Committee of The Second Affiliated Hospital of Guangzhou Medical University. Written informed consent to participate in this study was provided by the participants’ legal guardian/next of kin.

Our sincere thanks to Professor Wei-Ping Liao for editing this manuscript.

The Supplementary Material for this article can be found online at: https://www.frontiersin.org/articles/10.3389/fnmol.2022.862480/full#supplementary-material

Copyright © 2022 Bian, Li, Wang, Luo, Li, Gao, He and Yi. This is an open-access article distributed under the terms of the Creative Commons Attribution License (CC BY). The use, distribution or reproduction in other forums is permitted, provided the original author(s) and the copyright owner(s) are credited and that the original publication in this journal is cited, in accordance with accepted academic practice. No use, distribution or reproduction is permitted which does not comply with these terms.