Alka(e)nes are the predominant constituents of gasoline, diesel, and jet fuels. They can be produced naturally by a wide range of microorganisms. Bio-alka(e)nes can be used as drop-in biofuels. To date, five microbial pathways that convert free fatty acids or fatty acid derivatives into alka(e)nes have been identified or reconstituted. The discoveries open a door to achieve microbial production of alka(e)nes with high efficiency. The modules derived from these alka(e)ne biosynthetic pathways can be assembled as biological parts and synthetic biology strategies can be employed to optimize the metabolic pathways and improve alka(e)ne production.

Biofuel production from renewable sources is becoming more and more attractive because of the rapidly increasing consumption and irreversibly diminishing reserves of petroleum. Advanced biofuels produced from biological systems should be chemically similar to petroleum-based fuels. It is necessary to develop advanced biofuels besides widely used bioethanol and biodiesel (Keasling and Chou, 2008). Alka(e)nes of defined chain lengths possess higher energy density, hydrophobic property, and compatibility with existing liquid fuel infrastructure including fuel engines, refinery equipment, and transportation pipelines, and they can serve as better alternatives to petroleum-based fuels (Peralta-Yahya et al., 2012).

Several emerging researches on alka(e)ne biosynthesis were reported in 1940s and 1950s from sulfate-reducing bacteria and some marine bacteria (Zobell, 1945; Stone and Zobell, 1952). By the 1960s, investigations of microbial production of alka(e)nes were accelerated with the development of analytical techniques such as nuclear magnetic resonance (NMR), gas chromatography (GC), and mass spectrometry (MS). Alka(e)ne production was reported in a diversity of microorganisms including bacteria (Jones, 1969; Tornabene et al., 1970), algae (Gelpi et al., 1968), yeasts (Merdinge and Frye, 1966), and fungi (Oro et al., 1966; Walker and Cooney, 1973).

It was reported that a variety of alka(e)nes including long-chain and branched molecules were produced in cyanobacteria and heptadecane is the most abundant since 1960s (Han et al., 1969; Winters et al., 1969). In particular, cyanobacteria are unique in their ability to produce 7- and 8-methylheptadecanes in a ratio of 1:1, which was shown to be derived from 11-octadecenoic acid by the addition of methyl-14C group of methionine to a double bond (Fehler and Light, 1970). The alka(e)ne profile of algae was dominated by the odd-numbered n-alkanes, typically at C15, C17, or C21. Botryococcus braunii, a green alga, contains exceptionally high content of alka(e)nes (Brown et al., 1969; Banerjee et al., 2002). Yeasts are able to synthesize a wide range of alka(e)nes including not only n-alkanes but also unsaturated and branched components (Merdinge and Frye, 1966), whereas in fungi, long-chain alka(e)nes are predominant (Merdinge and Devine, 1965).

Mechanisms of alka(e)ne biosynthesis have been investigated biochemically long before availability of genetic information. Two alka(e)ne biosynthetic mechanisms were studied extensively. In “elongation–decarboxylation,” an acyl-coenzyme A (CoA) is elongated by the circular addition of a two-carbon unit derived from malonyl-CoA to an acyl-CoA with the subsequent decarboxylation to form an odd-chain alka(e)ne (Dennis and Kolattukudy, 1991, 1992). In “head-to-head condensation,” two fatty acid derivatives are conjugated to carboxylic acid by Claisen condensation, followed by decarboxylation and decarbonylation to form an odd-chain alkene (Albro and Dittmer, 1969b, 1970; Bird and Lynch, 1974). This review focuses on the diversified biosynthetic pathways of alka(e)nes. 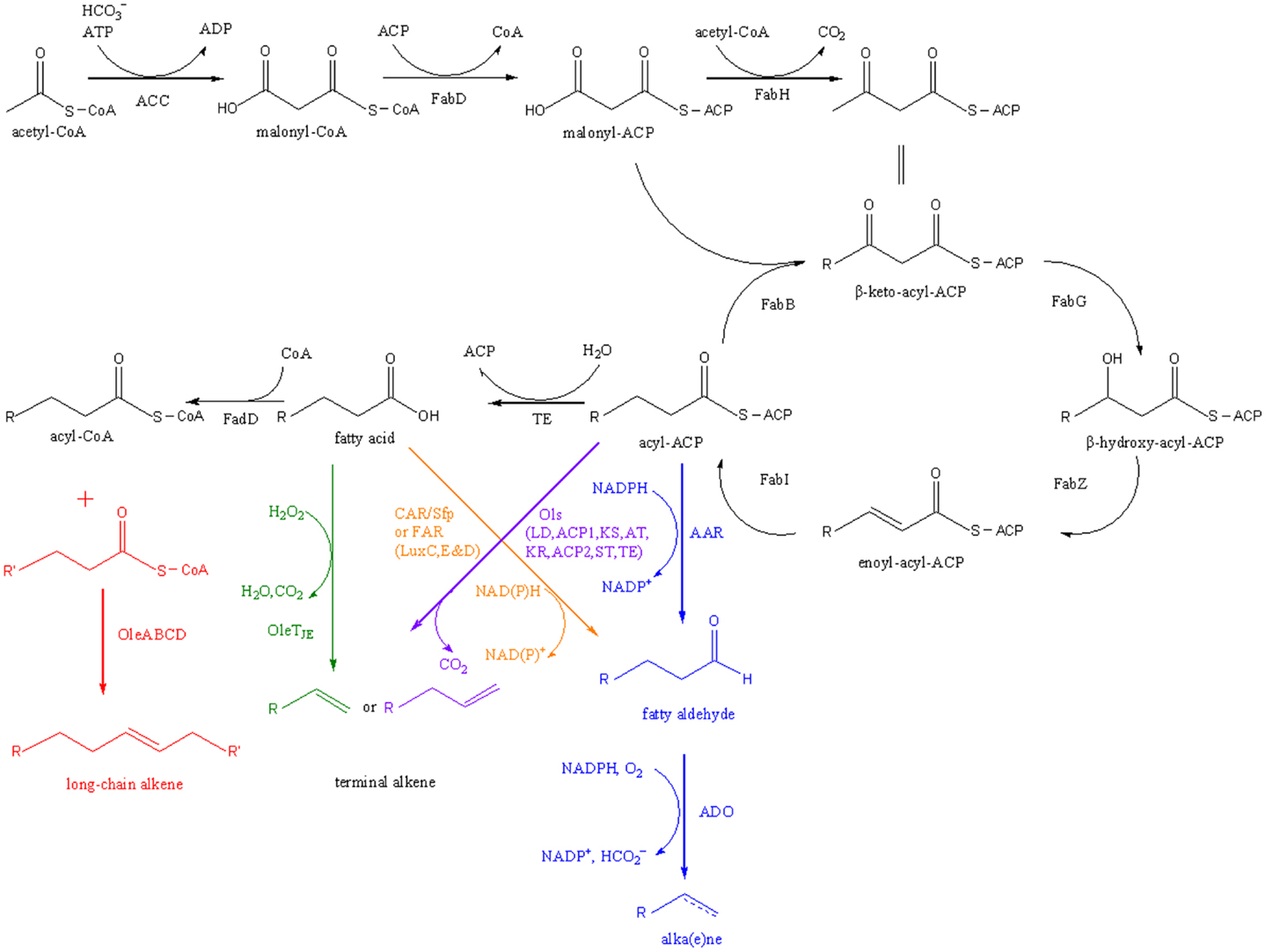 A subtractive genome analysis was employed by Schirmer et al. (2010) to identify cyanobacteria alkane biosynthetic pathway genes. No alkane biosynthesis was observed in Synechococcus sp. PCC7002, so 10 other alkane-producing cyanobacteria strains with sequenced genome and Synechococcus sp. PCC7002 were investigated. A 40% sequence identity was used to subtract the Synechococcus sp. PCC7002 genome by the other 10 genomes to cut off orthologs. After excluding 15 genes with unrelated functions, two candidate enzymes for alkane biosynthesis were identified and verified. Acyl–acyl carrier protein (ACP) can be reduced to aldehyde by an acyl-ACP reductase (AAR, EC 1.2.1.50), and then aldehyde can be converted to alkane or alkene with formation of carbon monoxide as a co-product by an aldehyde decarbonylase (ADC, EC 4.1.99.5) (Schirmer et al., 2010).

In the following research, formate rather than CO was identified as the stoichiometric co-product of the reaction converting fatty aldehyde to alkane or alkene by Nostoc punctiforme PCC73102 ADC (NpunR1711) overexpressed in Escherichia coli. Radiolabeled experiments indicated that the aldehyde hydrogen was retained in the formate and the hydrogen in the nascent methyl group derives at least partially from solvent (H2O) (Warui et al., 2011).

Conversion of fatty aldehydes to alka(e)nes and formate seems to be redox-neutral and formally hydrolytic, while the reaction is actually a novel redox oxygenation process. Cyanobacterial ADC is a non-heme di-iron oxygenase, which requires a reducing system and O2 to catalyze the conversion of fatty aldehydes to alka(e)nes and formate (Li et al., 2011). Isotopetracer experiments showed that O2 was involved in formation of a metal-bound peroxide nucleophile to attack the aldehyde and one oxygen atom is incorporated from O2 into formate. The oxygenative nature of the reaction implies that the enzyme ADC should be redesignated as aldehyde-deformylating oxygenase (ADO) (Li et al., 2012). It was reported that ADO activity is reversibly inhibited by H2O2 originating from poor coupling of reductant consumption with alka(e)ne formation, and the inhibition can be relieved by a fusion catalase (Andre et al., 2013).

Overexpression of both AAR and ADO from several cyanobacteria strains in Synechocystis sp. PCC6803 led to a doubled alka(e)ne production. Redirecting the carbon flux to acyl-ACP and overexpression of alkane biosynthetic genes simultaneously can significantly improve alka(e)ne production in engineered Synechocystis strains. Alka(e)ne content in a Synechocystis mutant overexpressing alkane biosynthetic genes in both slr0168 and slr1556 gene loci was 1.3% of DW, which was enhanced by 8.3 times compared with wild-type strain (0.14% of cell DW) (Wang et al., 2013).

A head-to-head condensation of fatty acid derivatives to generate long-chain olefins has been reported for more than 40 years (Albro and Dittmer, 1969a), while the genetic information of olefin biosynthesis were not elucidated until 2010. A three-gene cluster from Micrococcus luteus (Mlut_13230–13250) was identified as olefin biosynthetic genes (ole) by bioinformatics and biochemical analysis. Heterologous expression of the ole cluster from M. luteus in fatty acid-overproducing E. coli resulted in about 40 μg/L long-chain alkenes (Beller et al., 2010).

The head-to-head condensation reaction requires four protein families (OleABCD). The oleB and oleC genes are fused and encode a multi-domain protein (for example, Mlut_13230) in a variety of bacteria. Putative ole genes were identified in 69 out of 3558 genomes analyzed by sequence alignments and gene context analysis (Sukovich et al., 2010a). The OleABCD protein families were defined within thiolase, α/β-hydrolase, AMP-dependent ligase/synthetase, and short-chain dehydrogenase superfamilies, respectively.

In-depth studies on head-to-head olefin biosynthesis have focused on OleA. OleA catalyzes the first committed step in the olefin biosynthetic pathway and plays a critical role in determining product structure. A Claisen condensation of fatty acid derivatives is catalyzed by OleA to generate a β-ketoacid that can decarboxylate spontaneously to generate ketones (Frias et al., 2011). The production of olefins required the presence of OleC and OleD, which catalyze further reactions with the β-ketoacid intermediate generated by OleA (Sukovich et al., 2010b; Frias et al., 2011). The conservation of oleB in the ole gene clusters suggests that it does play a role in olefin biosynthesis, but no mechanism or defined role of OleB has been reported (Sukovich et al., 2010a).

To understand the substrate positioning in the context of enzyme turnover, the crystal structures of unbound OleA from Xanthomonas campestris, OleA-cerulenin, and xenon-derivatized OleA-cerulenin cocrystals were determined. The active site of OleA contains a cysteine (Cys143) and a glutamic (Glu117β) residue. An additional long-chain alkyl binding channel required for OleA catalysis was assigned (Goblirsch et al., 2012).

Heterologous expression of oleTJE conferred terminal olefin production to E. coli. However, the olefin titer in E. coli expressing oleTJE was not reported. The fatty acid decarboxylase OleTJE is a P450 peroxygenase from the cyp152 family, which directly decarboxylate long-chain FFAs (C16–C20) to α-olefin using H2O2 as its main source of electrons. It is indicated that OleTJE also includes fatty acid hydroxylase activity and His85 in OleTJE plays an important role in catalysis (Rude et al., 2011).

The ols gene encodes a large multi-domain type I polyketide synthases (PKS). Acyl-ACP is loaded to the ACP1 domain by the loading domain (LD), then two carbons from malonyl-CoA are added to the acyl-substrate by the central extension module including ketosynthase (KS), acyltransferase (AT), ketoreductase (KR), and ACP2 domain and the β-keto group is reduced to a β-hydroxyl. The sulfotransferase (ST) domain activates the β-hydroxyl group via sulfation. Subsequent dehydration and decarboxylation reactions could be catalyzed by the C-terminal thioesterase (TE) domain (Mendez-Perez et al., 2011).

The native promoter of the ols gene was replaced with the promoter of psbA in Amaranthus hybridus. Production of 1 nonadecene and 1,14 nonadecadiene were increased two- and five-fold respectively in the promoter replacement mutants. The highest observed olefin titer was about 4.2 μg/ml/OD730. A 2.2-fold increase in mRNA level was observed in the mutant relative to the wild-type strain (Mendez-Perez et al., 2011).

Recently, artificial alkane biosynthetic pathways were designed and implemented for the production of alka(e)nes in E. coli. The carboxylic acid reductase (CAR) from Mycobacterium marinum together with the phosphopantetheinyl transferase Sfp from Bacillus subtilis (Quadri et al., 1998) and fatty acid reductase (FAR) complex encoded by the genes luxC, luxE, and luxD from Photorhabdus luminescens can catalyze formation of fatty aldehydes from FFAs (Akhtar et al., 2013; Howard et al., 2013). Coupled with ADO from cyanobacteria, fatty aldehydes can be converted further to alka(e)nes.

Genetic parts such as certain thioesterase, lipase, the branched-chain α-ketoacid dehydrogenase complex and β-keto-acyl-ACP synthase III from B. subtilis can be introduced to E. coli for targeted manipulation of the fatty acid pool to synthesize straight-chain or branched (iso-) alkanes (Howard et al., 2013). However, alka(e)ne titers from these artificial alkane biosynthetic pathways were only ∼2–5 mg/L. It is proposed that a much more efficient competing pathway diverting aldehyde to fatty alcohol by an E. coli native fatty aldehyde reductases leads to the low alka(e)ne productivity (Akhtar et al., 2013).

The five microbial alka(e)ne biosynthetic pathways are all derived from fatty acid metabolism. To date, extensive genetic and biochemical studies were performed on “AAR-ADO” and “Head-to-Head” pathways. Linear and branched alkanes can be produced in “AAR-ADO” and “CAR/FAR-ADO” pathways. The unique P450 enzyme OleTJE can directly convert long-chain FFAs (C16–C20) to α-olefin, which is a short cut to alkenes. The gap between current biosynthetic efficiency and commercial alka(e)ne production remains huge (Table 1).

Albro, P. W., and Dittmer, J. C. (1969b). The biochemistry of long-chain, nonisoprenoid hydrocarbonss. II. The incorporation of acetate and the aliphatic chains of isoleucine and valine into fatty acids and hydrocarbon by Sarcina lutea in vivo. Biochemistry 8, 953–959. doi:10.1021/bi00833a022

Copyright: © 2013 Wang and Lu. This is an open-access article distributed under the terms of the Creative Commons Attribution License (CC BY). The use, distribution or reproduction in other forums is permitted, provided the original author(s) or licensor are credited and that the original publication in this journal is cited, in accordance with accepted academic practice. No use, distribution or reproduction is permitted which does not comply with these terms.