Fabrication of surface plasmon resonance sensor surface with control of the non-specific adsorption and affinity for the detection of 2,4,6-trinitrotoluene using an antifouling copolymer

We fabricated a surface plasmon resonance (SPR) sensor using a hydrophilic polymer for the highly sensitive detection of 2,4,6-trinitrotoluene (TNT). The hydrophilic polymer was made from mono-2-(methacryloyloxy)ethylsuccinate (MES) and 2-hydroxyethylmethacrylate (HEMA) by surface-initiated atom transfer radical polymerization. The detection of TNT was carried out by displacement assay with the SPR measurement. In displacement assay, the affinity between anti-TNT antibody and the sensor surface, affects to the sensitivity. In the SPR measurement, non-specific adsorption should be controlled because SPR sensor cannot discriminate between specific and non-specific adsorption. Therefore, the affinity and non-specific adsorption were controlled by changing the ratio of HEMA to MES. A detection limit of 0.4 ng/ml (ppb) for TNT was achieved using a sensor surface with the lowest affinity without non-specific adsorption.

Since the terrorist attacks in the USA on September 11, 2001, the threat to the world has shifted to terrorism from war between nations. The threat of explosives has spread to our living space from the battlefield. Explosives are used by terrorists at places where people gather, such as airports and shopping malls. In airports, sniffer dogs are employed for the detection of explosives. However, if a sensor were capable of measurement with high sensitivity for explosive compounds, it would be possible to uncover bombs more effectively.

The detection of explosives has been attempted by various other methods. In one method, the detection of 2,4,6-trinitrotoluene (TNT) or 1,3,5-trinitroperhydro-1,3,5-triazine (research department explosive, RDX) was performed using a laser (Roberson and Sausa, 2010). This method has the advantage that real-time measurement is possible. Similar to this method, there is a method of using an optical fiber in its optical system (Bakaltcheva et al., 1999; Van Bergen et al., 2000). In an electrochemical method, the chemical adsorption between SiO2 nanostructures and nitroaromatic compounds is employed (Zhang et al., 2006). This method is simple and suitable for portable sensors. For another method, a localized surface plasmon resonance (L-SPR) sensor was developed using an imprinted nanostructure of gold particles (Riskin et al., 2009). The advantage of this method is ultrahigh sensitivity to TNT. In another similar method, detection was carried out using the quenching of fluorescence by nitroaromatic compounds (Yang and Swager, 1998; Chang et al., 2004). This method has the advantage that the detection can be performed in air. For another method using fluorescence, fluorescence resonance energy transfer (FRET) and DNA are employed (Medintz et al., 2005). The advantage of this method is capable of adapting dynamic range because the structure of sensor surface has high flexibility. In conclusion, much effort has been expended on the detection of explosives.

We previously realized an ultrahigh-sensitivity TNT sensor using a surface plasmon resonance (SPR) sensor and an antigen–antibody interaction (Matsumoto et al., 2005; Singh et al., 2007; Mizuta et al., 2008; Onodera, 2013). This SPR sensor has high sensitivity to changes in the refractive index upon the adsorption of substances on a thin gold surface. The antigen–antibody interaction, which is an immunoreaction, has high selectivity to a target compound. The TNT sensor, which has high selectivity and sensitivity, operates under combination of these principles.

It is advantageous to arrange the binding sites of the TNT antibody in three dimensions for the detection of TNT at low concentrations. We realized the sensor surface by a method in which a dendrimer or a polymer is immobilized on the surface, or a method in which the polymer chain grows from the surface (Mizuta et al., 2010; Yatabe et al., 2013a,b).

We have used surface-initiated atom transfer radical polymerization (SI-ATRP) to fabricate a polymer surface (Zhao and Brittain, 2000). This fabrication has several steps. First of all, an initiator compound for ATRP is immobilized on the surface as a self-assembled monolayer (SAM). Next, the reaction solution, containing the monomer, catalyst, and reducing agent, is brought into contact with the surface. Then, the polymer chain grows from the initiator on the surface. In ATRP, the polymer chain grows while alternately repeating propagation and dormant states (Matyjaszewski and Xia, 2001). In the propagation state, the growth point has a radical and reacts with a monomer. If the proportion of the propagation state is higher, the polymerization reaction progresses faster, but it often terminates because radicals are presenting high concentrations. Thus, it is difficult to control the polymerization. However, when the reaction conditions are appropriately selected, the proportion of the dormant state becomes much higher than that of the propagation state. As a result, the polymerization seldom terminates because of the low concentration of radicals. This means that it is easy to control the length of the polymer chain by adjusting the reaction time. In addition, another polymerization can restart upon the contact of another reaction solution with the surface after the first polymerization. Therefore, various types of polymer can be connected directly to each other. In conclusion, various types of polymer surface can be easily fabricated by SI-ATRP.

SIA Kit Au (GE Healthcare Bioscience), which contains sensor chips with an unmodified gold layer of ca. 50 nm thickness, was used for the immobilization of various reagents on the surface. Figure 1 shows the fabrication procedure of a sensor surface using SI-ATRP. This figure shows the case in which the monomers were not mixed to simplify the explanation. First, the sensor chip was cleaned in a mixed solution of Milli-Q water, ammonia solution, and hydrogen peroxide with a 5:1:1 volume ratio at 90°C for 20 min. After that, the sensor chip was immersed in 1 mM DTBU (in ethanol) for 24 h at 18°C to form an SAM with an initiator for ATRP. After the sensor chip was cleaned in ethanol by ultrasonic cleaning, it was immersed in a reaction solution at 40°C to induce activator-generated electron transfer for atom transfer radical polymerization (AGET–ATRP). The reaction solution was prepared by mixing a monomer, a catalyst solution, and a reducing agent. The catalyst solution was a mixed solution of 1 mM CuCl2 and 10 mM TPMA in N,N-dimethylformamide (DMF). The reducing agent was a 1 mM ascorbic acid solution in DMF. These solutions were degassed in vacuum for 1.5 h, and mixed immediately before the polymerization. The reaction solution contained the monomer, CuCl2, TPMA, and ascorbic acid. After the polymerization, the reaction solution was removed using DMF. The thickness of the polymer layer in air was measured using a SpecEl-2000-VIS spectroscopic ellipsometer (Mikropack GmbH, Germany). Table 1 shows the reaction conditions and the thickness of the polymer layer under each set of conditions. These reaction conditions were adjusted to obtain polymer layers with about 10 nm thickness. Then, the sensor chip was immersed in a mixed solution of 0.4 M EDC (in water) and 0.1 M NHS (in DMF) at a 1:1 volume ratio for 1 h to activate the carboxyl groups of the polymer as NHS esters. Next, the chip was immersed in 10 mM DNP-Hdrz (in DMF) for 1 h to combine the amino group of the DNP-Hdrz and the activated carboxyl group of the polymer. Then, the chip was immersed in 0.5 wt.% sodium dodecyl sulfate for cleaning. Finally, it was rinsed in Milli-Q water to complete the fabrication of the sensor chip with binding sites of an anti-TNT antibody on the polymer. 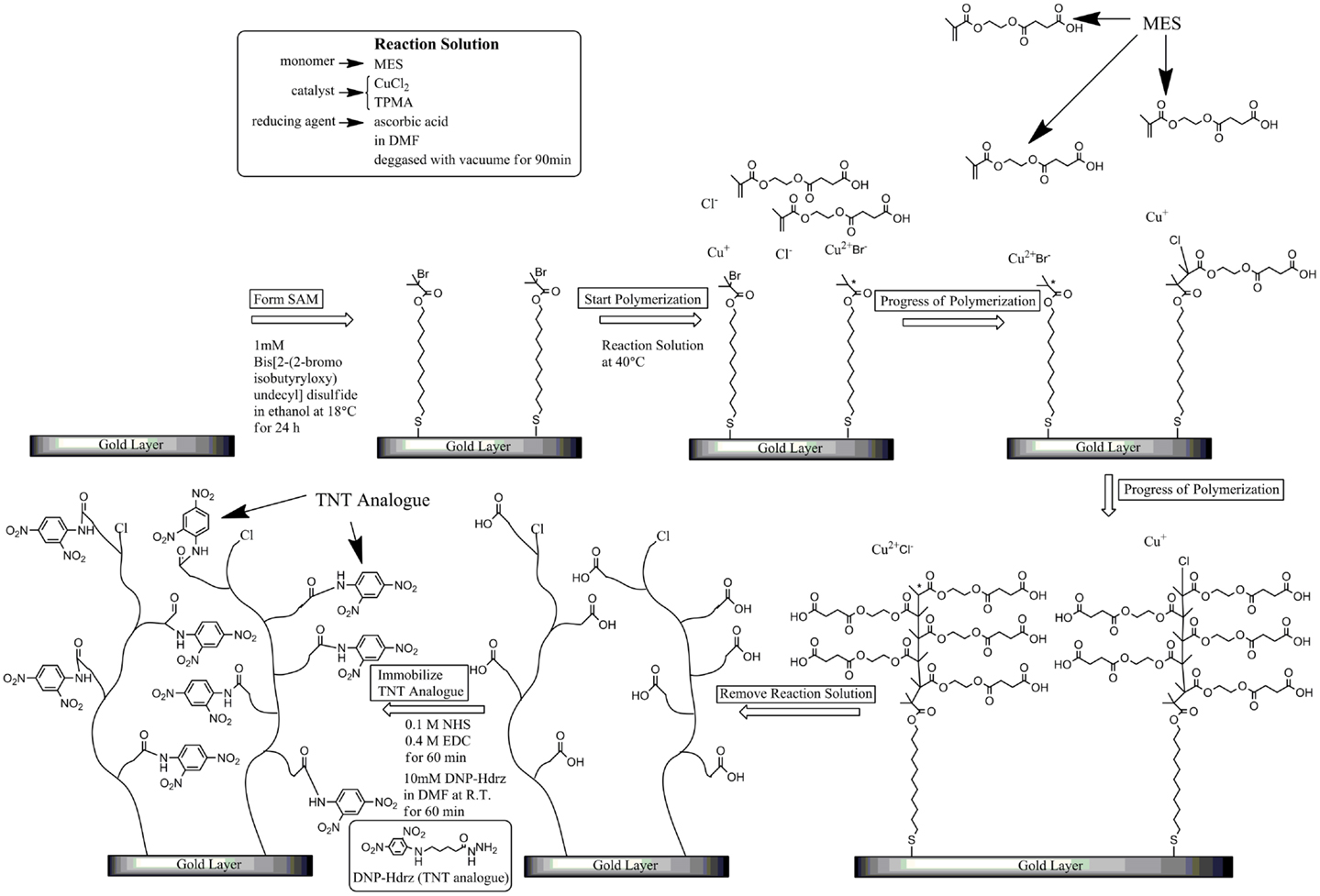 Table 1. The reaction conditions and the thickness of polymer layer; diluted by DMF: monomer solution in ATRP reaction solution was diluted by DMF with some fold volume; reaction time: for example, “600 × 3” means that the polymerization thrice was performed for 600 s.

Instrument and Conditions for SPR

Biacore J (GE Healthcare Bio-sciences) was used for the SPR measurement. HBS-T (10 mM 2-[4-(2-hydroxyethyl)-1-piperazinyl]-ethane sulfonic acid, 150 mM NaCl, 0.005% Tween 20: pH 7.4) was used as a running buffer solution. The measurements were conducted at a constant temperature of 25°C in nitrogen. The flow rate of the solution was 10 μl/min. When the anti-TNT antibody solution was allowed to flow over the DNP-Hdrz immobilized on the chip surface, the antibody was bound to DNP-Hdrz. The SPR sensor can measure the change in the refractive index. The SPR response, which is defined in resonance units (RU), increased with increasing amount of antibody bound on the surface. A resonance angle shift of 0.0001° is defined as 1 RU and is equivalent to a change in mass of 1 pg/mm2 on the surface (Stenberg et al., 1991). In most of the experiments, the dissociation of surface-bound antibodies for regeneration was completed when 5 M guanidine hydrochloride (in water) was allowed to flow over the surface. The association rate constant (ka) and dissociation rate constant (kd) were calculated from the sensor response curve by BIAevaluation software (version 3.2; GE Healthcare Bio-sciences). The analysis model was 1:1 (Langmuir) binding. To induce association, the antibody at a concentration of 25 ppm was allowed to flow for 5 min. The dissociation was conducted for 5 min. 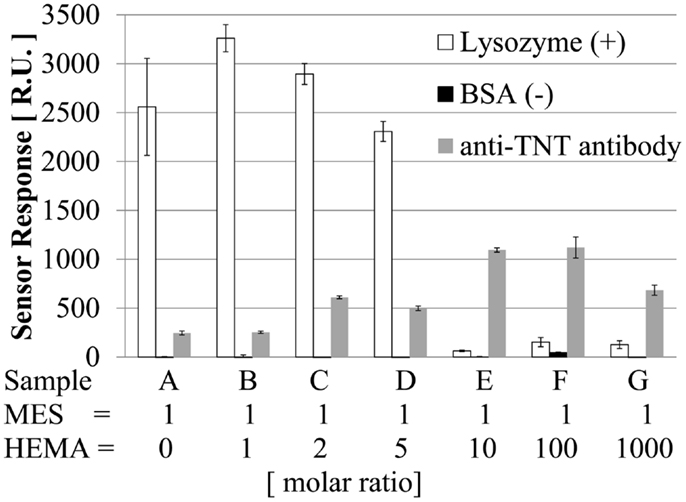 Detection of TNT by Displacement Assay with Surfaces of Various Affinities

The detection of TNT was performed by displacement assay. The measurement was carried out three times for each concentration of TNT. Calibration curves for the TNT concentration were created by the measurement of each sample. The LOD was calculated by considering three standard deviations at a 0 ppb concentration of TNT (the same as for HBS-T). In addition, the association rate constant ka and dissociation rate constant kd were calculated using a sensorgram when the running buffer solution was allowed to flow for 5 min after the antibody solution (25 ppm) flowed for 5 min on the surface. Table 2 shows the results. First, the LOD became small with decreasing amount of MES. The kd tended to become high with decreasing amount of MES. The amount of antibody adsorbed was small when the ratio of MES was small, as described in Section “Evaluation of Nonspecific Adsorption on Poly-MES-co-HEMA Based Surface,” because of the high kd. A low LOD was realized with a high kd. The lowest LOD was 0.4 ppb. The measuring time was 5 min. 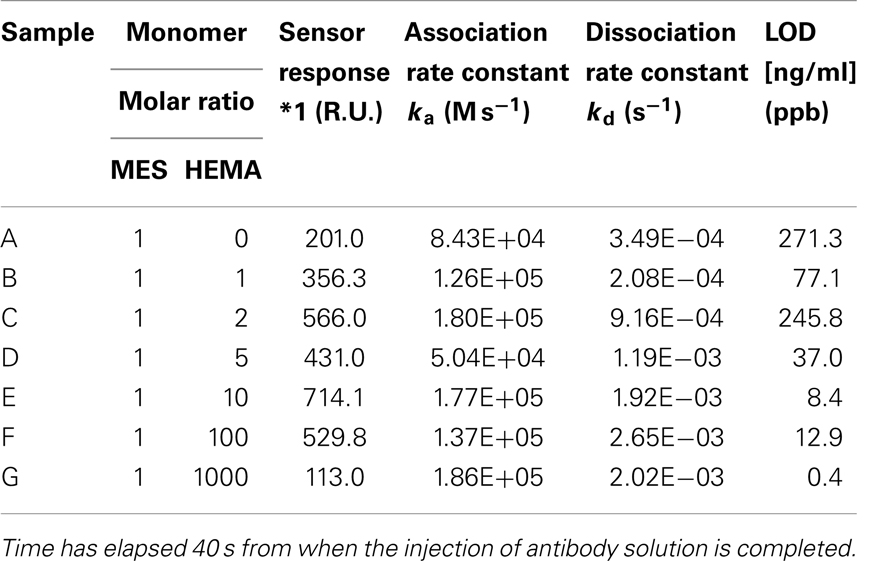 Table 2. Kinetics parameters and the limit of detection (LOD); the LOD was calculated by considering three standard deviations at a 0 ppb concentration of TNT; sensor response *1: it was measured when the injection of TNT solution was started.

In addition, the sensor surface with poly-MES-co-HEMA has another advantage for optimization. Analogs that have amino groups can be used on the poly-MES-co-HEMA surface because analogs are immobilized on the carboxyl group of MES by the amine coupling reaction. The advantage is that various analogs can be used; for example, analogs with a carboxyl group can be used if aminoethylmethacrylate (AEMA), which has an amino group, is used in place of MES. It is important to select an appropriate analog because the analog affects the affinity and the characterization of the sensor. In conclusion, it is possible to enhance the capability of the sensor by selecting the analog considering the use of not only MES but also AEMA.

We fabricated an SPR sensor surface for the detection of TNT by SI-ATRP. The surface was prepared using poly-MES-co-HEMA, which was made by mixing the monomers MES and HEMA. MES is negatively charged and can immobilize a TNT analog. HEMA is electrically neutral and hydrophilic. Non-specific adsorption on the surface was controlled by increasing the amount of HEMA. In addition, the LOD and the measurable range could be changed by adjusting the ratio of HEMA to MES. The lowest LOD obtained was 0.4 ppb. We expect that it will be possible to enhance the capability of the sensor by optimizing the ratio of MES to HEMA and selecting an appropriate TNT analog.

This work was supported by a Grant-in-Aid for Young Scientists A (23686062) from Japan Society for the Promotion of Science.

Copyright: © 2014 Yatabe, Onodera and Toko. This is an open-access article distributed under the terms of the Creative Commons Attribution License (CC BY). The use, distribution or reproduction in other forums is permitted, provided the original author(s) or licensor are credited and that the original publication in this journal is cited, in accordance with accepted academic practice. No use, distribution or reproduction is permitted which does not comply with these terms.