Institute of Physiology, Academy of Sciences of the Czech Republic (ASCR), Czechia

Vascular stretch injury is associated with blunt trauma, vascular surgical procedures, and harvest of human saphenous vein for use in vascular bypass grafting. A model of subfailure overstretch in rat abdominal aorta was developed to characterize surgical vascular stretch injury. Longitudinal stretch of rat aorta was characterized ex vivo. Stretch to the haptic endpoint, where the tissues would no longer lengthen, occurred at twice the resting length. The stress produced at this length was greater than physiologic mechanical forces but well below the level of mechanical disruption. Functional responses were determined in a muscle bath, and this subfailure overstretch injury led to impaired smooth muscle function that was partially reversed by treatment with purinergic receptor (P2X7R) antagonists. These data suggest that vasomotor dysfunction caused by subfailure overstretch injury may be due to the activation of P2X7R. These studies have implications for our understanding of mechanical stretch injury of blood vessels and offer novel therapeutic opportunities.

Mechanotransduction and the signaling events associated with physiologic mechanical forces have been well characterized [reviewed in Hahn and Schwartz (2009)]. However, much less is known about the responses to surgical or traumatic mechanical stretch injury and the molecular events that transduce pathologic mechanical injury in vascular tissues. Porcine saphenous veins subjected to stretch injury during harvest have decreased vasomotor function that is ameliorated by treatment with the P2X7R antagonist brilliant blue FCF (Hocking et al., 2015). In addition, harvest and preparation of HSV leads to decreased vasomotor function that is ameliorated by brilliant blue FCF treatment (Voskresensky et al., 2014). These data suggest that injury during surgical harvest and preparation of saphenous veins is associated with vasomotor dysfunction that is restored by treatment with P2X7R antagonists (Voskresensky et al., 2014; Hocking et al., 2015). These data further suggest that pathologic surgical injury of vascular tissues may be mediated by P2X7R.

In this study, we developed and characterized the biomechanical properties and functional consequence of vascular stretch injury consistent with the injury that occurs during endoscopic harvest in a rat abdominal aorta (RA) model. The hypothesis of this investigation is that mechanical stretch injury to vascular tissue leads to the activation of P2X7R. This hypothesis poses a novel signaling mechanism, whereby mechanical injury modulates subsequent injury responses in vascular tissues. The RA model allows elucidation of molecular events associated with vascular subfailure overstretch injury. Findings from these studies may lead to the development of therapeutics to alleviate vascular overstretch injury.

Human saphenous vein was obtained after approval from the Institutional Review Boards of Vanderbilt University Medical Center from patients undergoing coronary artery bypass grafting procedures. Vein segments were collected immediately after initial exposure without stretch [“unprepared” (UP) vein samples] and again after harvest and graft preparation [“after preparation” (AP) vein samples]. Vein segments were transported to laboratory in heparinized PlasmaLyte at room temperature (HP; 10 U heparin/mL PlasmaLyte) for experimentation within 30 min of collection.

Abdominal aorta were collected from female, 250–300 g, Sprague Dawley rats (RA). Animal procedures followed study protocols approved by the Vanderbilt Institutional Animal Care and Use Committee and adhered to the National Institute of Health guidelines for care and use of laboratory animals. Immediately after euthanasia by CO2 asphyxiation, the abdominal aorta was isolated via an incision along the mid-abdomen and in vivo loaded length prior to excision was measured. The RA was then excised and length recorded. The vessel was placed in HP at room temperature and transported to the laboratory for immediate testing.

The abdominal aorta was chosen for this model because this segment has the highest in vivo axial loading along the long axis of the aorta (Kassab, 2006). RA was dissected free of fat and connective tissue. Vessels were tied at both ends using surgical sutures 10–12 mm apart and distance between the two ties was defined as the basal length (L0). The proximal end was tied to a ring support. Calibrated weights were then added progressively to the distal end, and length of the stretched tissue (L1) was measured using a hand-held digital caliber until final yielding. Yielding or failure of the vessel is defined as necking, tear, or transaction between the ties. At the end of the experiment, weight of tissue was recorded. During the test, 0.9% normal saline was sprayed in order to prevent samples dehydration. Mechanical characteristics were defined and calculated as follows:

(1) In vivo stretch (λiv) was calculated as in vivo loaded length/excised length.

A segment of RA was reserved as non-stretched control. The remaining RA was manually stretched to 200% the excised length for 10 s and repeated twice (Hocking et al., 2011). Stretched RA was then cut into segments and incubated for 1 h at room temperature in HP with or without the P2X7R antagonists, periodate-oxidized ATP (oATP; 100 μM) or A438079 (100 μM).

Representative sampling of stress generated during stretch injury was measured by securing the proximal end to a force transducer (AD instruments model MLT1030D) interfaced with a PowerLab data acquisition system and Chart software (AD Instruments). RA was stretched to twice the length as described above.

Human saphenous vein or RA (after stretch injury) was cut transversely into rings of 1–2 mm in width and suspended in a muscle bath containing a bicarbonate buffer (120 mM NaCl, 4.7 mM KCl, 1.0 mM MgSO4, 1.0 mM NaH2PO4, 10 mM glucose, 1.5 mM CaCl2, and 25 mM NaHCO3, pH 7.4) equilibrated with 95% O2/5% CO2 at 37°C. Force measurements were obtained using the Radnoti force transducer (model 159901A) interfaced with a PowerLab data acquisition system and Chart software. Tissues were progressively adjusted to a resting tension of 1 g for 1 h and then primed by passive stretch to 3 g and immediately returned to the resting tension. This produced the maximal force–tension relationship as previously described (Flynn et al., 2005; Voskresensky et al., 2014; Jespersen et al., 2015). After equilibration at resting tension for an additional 1 h, the rings were contract with 110 mM KCl (with equimolar replacement of NaCl in bicarbonate buffer) repeatedly until a maximum tension was obtained to determine functional viability. Contractile responses were defined by stress, calculated using force generated by tissues. Each data point was averaged from at least two rings from the same specimen.

Data were reported as mean responses±SEM. The statistical significance (p value) and achieved power of each experiment was determined using GraphPad Prism version 5.0 and G*Power version 3.1.9.2 (www.gpower.hhu.de/en.html), respectively. Paired t-tests were used for experiments with dependent (matched pairs) samples from the same animal. A p value <0.05 was considered statistically significant.

To determine the impact of surgical harvest and preparation on physiologic function of HSV, segments were harvested under direct exposure with no traction (UP) or obtained after endoscopic harvest and preparation and prior to implantation (AP). Rings of 1–2 mm were suspended in a muscle bath, and smooth muscle contractile response to the depolarizing agent KCl (110 mM) was determined. Contractile responses were impaired in the AP compared to paired UP segments (Figure 1). 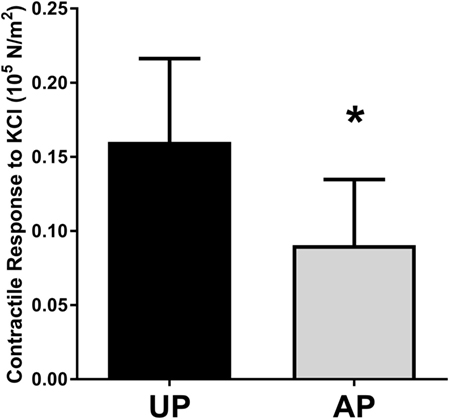 To examine vascular stretch injury under controlled conditions, we developed a traction stretch injury model using isolated RA that produced subfailure overstretch injury. First, the mechanical properties of the longitudinal stretch of isolated RA were characterized. Weights were added progressively to generate longitudinal stretch (Figure 2A), resulting in concomitant increase in stress in the tissues (Figure 2B). Stretch–stress behavior indicated that additional weight continued to increased stress with little further increase in stretch ratio until yielding of the tissue. Location of failure sites varied and structural failure occurred under 112.5 ± 33.8 g of force with a corresponding axial stress of 26.93 ± 10.92 × 105 N/m2 (Figure 3). 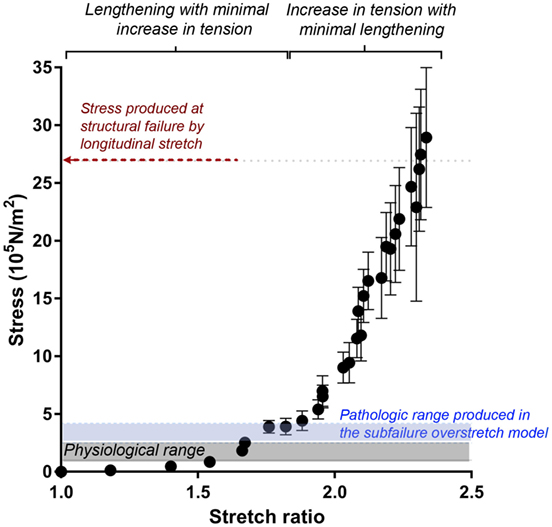 Next, we determined the stretch–stress behavior of RA under subfailure stretch. Isolated RA was manually stretched to the haptic endpoint, which was defined as the extent of longitudinal stretch in which the experimenters sensed force feedback of the vessels without producing structural failure (Figure 4A). λev was produced similarly by multiple experimenters and corresponds to the maximal level of stretch that would typically occur under surgical conditions. Representative sampling (n = 6) of λev during experimental traction stretch injury is 2.1 ± 0.2 (twice the excised length) with a corresponding stress of 3.26 ± 0.62 × 105 N/m2 (Figure 3). 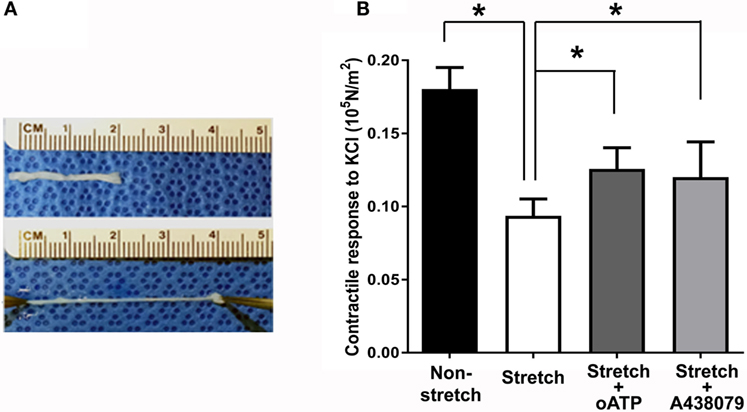 Endoscopic harvest leads to traction stretch of the HSV. In addition, the HSV is prepared on the back table prior to implantation, and these preparation techniques may further injure the HSV (Eagle et al., 2011; Li et al., 2013; Wise et al., 2015). This injury is associated with functional impairment of saphenous vein (Figure 1).

To determine if P2X7R activation was associated with vascular stretch injury, a model of subfailure overstretch of rat aorta was developed. Physiological, in vivo axial strain on vessels is typically in the 40–80% range (Learoyd and Taylor, 1966; Guo and Kassab, 2003). Length–tension curves of isolated RA showed that the vessel lengthening with minimal increase in stress and reached a plateau at λev = 2 at a force of 41.50 ± 21.81 g with a corresponding stress of 8.76 ± 3.76 × 105 N/m2, far below the force that led to structural failure (Figure 2). The rapid increase in stress without noticeable lengthening of the vessel beyond λev = 2 is due to the tensile strength of the vessels.

In the RA model, the vessel could be stretched to twice their excised length before lengthening was limited by haptic feedback. Stretch–stress curve showed that this level of stretch was just above the range of physiological axial stress but well below the range at which structural failure occurred (Figure 3) (Lawrence and Gooch, 2009; Krishnan et al., 2015). Thus, the RA model of subfailure overstretch is defined as the level of haptic feedback of increased tension at which the tissues were manually stretched to twice the ex vivo length. This level of stretch is consistent with that would occur during haptic feedback of routine surgical handling of vascular tissue such as endoscopic harvest of HSV.

Endoscopic harvest of HSV and overstretch injury during harvest may activate molecular events that contribute to vein graft failure. P2X7R activation potentiates the response to ATP by causing further release of ATP through P2X7R channels and pores and release of ATP from cell death due to necrosis and apoptosis (Schulze-Lohoff et al., 1998). Thus, P2X7R activation may amplify the response to release of ATP. P2X7R activation leads to multiple downstream events that may modulate the response to injury including activation of the p38MAPK pathway, thrombosis, apoptosis, and inflammation (Donnelly-Roberts et al., 2004; Burnstock, 2009; Furlan-Freguia et al., 2011; Di Virgilio, 2012). These cellular events are central to the development of intimal hyperplasia in vascular grafts and contribute to vein graft failure.

Human saphenous veins varied due to patient demographics, but effect of graft preparation on physiologic responses was adjusted for in pair-wise comparison of segments collected from the same patients. Isolated rat arteries were used to develop the subfailure stretch injury model. There may be differences in responses of arteries from different vascular beds, differences in arteries and veins, and species differences to stretch injury; however, RA represents plentiful reproducible vascular tissue.

We would like to thank the Vanderbilt cardiac surgical teams for providing human specimens for this study.

Copyright: © 2016 Luo, Guth, Jolayemi, Duvall, Brophy and Cheung-Flynn. This is an open-access article distributed under the terms of the Creative Commons Attribution License (CC BY). The use, distribution or reproduction in other forums is permitted, provided the original author(s) or licensor are credited and that the original publication in this journal is cited, in accordance with accepted academic practice. No use, distribution or reproduction is permitted which does not comply with these terms.