Foods and beverages produced by fermentation are essential to human nutrition worldwide and, therefore, have been extensively studied (Sõukand et al., 2015). Vinegar, kombucha beverage, milk kefir, water kefir, and cocoa are the products of acetic acid fermentation (Li et al., 2015). Acetic acid bacteria (AAB) oxidize sugars or ethanol to produce acetic acid, playing an important role in fermentation. AAB have been used historically for various fermentation processes and are Gram-negative obligate aerobic bacteria of the family Acetobacteraceae of Alphaproteobacteria (Saichana et al., 2015). Although various bacteria can produce acetic acid, most commercially used bacteria are species of Acetobacter, Gluconacetobacter, and Gluconobacter (Raspor and Goranovic, 2008). Among these organisms, Acetobacter species have attracted much attention in the field of biotechnology because these species are able to tolerate high acetic acid concentrations in the environment (Matsutani et al., 2011).

Acetobacter pasteurianus, one species of Acetobacter, has been used to brew vinegar worldwide (Gullo et al., 2006). The valuable and useful characteristics of A. pasteurianus motivated us to sequence and analyze the full genomes of two type strains of A. pasteurianus subspecies: A. pasteurianus subsp. ascendens LMG 1590T and A. pasteurianus subsp. paradoxus LMG 1591T. Type strain is usually the firstly isolated strain of the species, and exhibits all of the relevant phenotypic and genotypic properties cited in the species circumscriptions. Therefore, the genome sequence of type strain is important to analyze the phenotypic and genotypic characteristics of species (Kim et al., 2014). The genomes of these two strains were compared with other complete genome sequences, and the important proteins involved in acetic acid production are discussed.

The genomes of the two strains were sequenced at Macrogen using two different technologies: Illumina HiSeq and the PacBio single-molecule real-time technique with a 10-kb library (South Korea). De novo assembly of the read sequences was carried out using the hierarchical genome assembly process workflow. The annotation of the sequences was carried out using a modified version of the Prokka annotation pipeline, which incorporated Prodigal 2.60, Aragorn, and RNAmmer 1.2 for the prediction of open reading frames, tRNAs, and rRNAs, respectively (Seemann, 2014). Genome comparison among the two strains and other fully sequenced A. pasteurianus genomes was carried out by using Mauve software (Darling et al., 2010).

Direct Link to Deposited Data and Information to Users 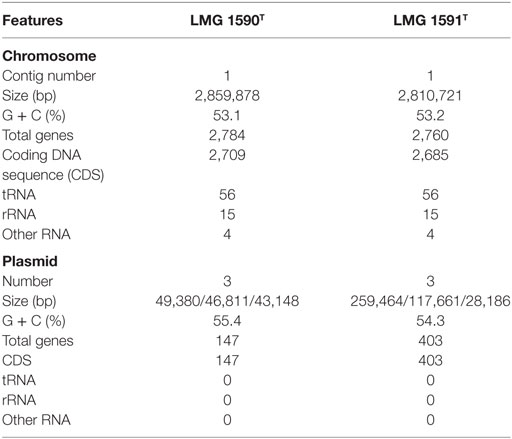 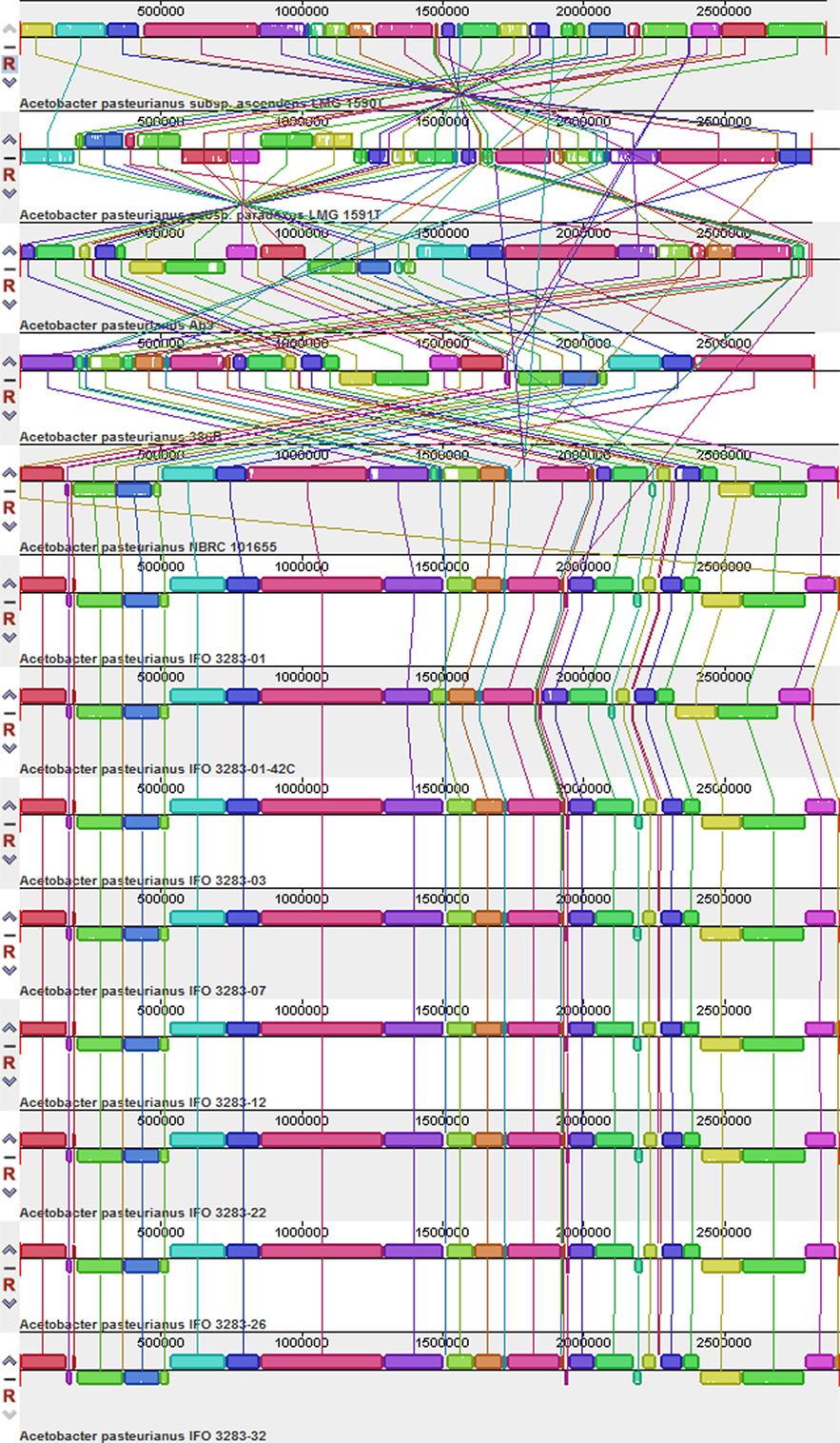 Figure 1. Global multiple alignments of Acetobacter pasteurianus chromosomes. The 13 genomes were compared to each other using progressive MAUVE with default parameters. Colored blocks outline the genome sequence that aligned to part of another genome and was presumably homologous and internally free from genomic rearrangement (locally collinear blocks). White regions are sequences that were not aligned and probably contained sequence elements specific to a particular genome. Blocks below the center line indicate regions that aligned in the reverse complement (inverse) orientation. The names of the strains are listed at the bottom of the blocks.

The pyrroloquinoline quinone (PQQ)-alcohol dehydrogenase (ADH) and aldehyde dehydrogenase (ALDH) are responsible for the oxidative metabolism of ethanol to produce acetic acid in AAB. These proteins generally consist of three subunits: a quinohemoprotein catalytic subunit, a triheme cytochrome c subunit, and a third subunit with unknown function. Sequence analysis of the catalytic subunits of the ADHs from strains LMG 1590T and LMG 1591T by a combined transmembrane topology and signal peptide predictor indicated that both of the proteins had a signal peptide and were located in the periplasmic space (Käll et al., 2004). The ADHs were aligned with the well-studied ADH from Pseudomonas putida (50% identity to ADHs from LMG 1590T and LMG 1591T) (Xia et al., 1996), and the final output was processed using the program ESPript 3.0 (Robert and Gouet, 2014). The results indicated that the PQQ bound to the N-terminal portion, whereas the C-terminal end bound the heme c (Figure S2 in Supplementary Material). The ADHs and ALDHs from the 13 strains were further aligned using Clustal Omega (Sievers and Higgins, 2014). Both ADHs and ALDHs from the strains showed high identity (>98%; Tables S1 and S2 in Supplementary Material), although Acetobacter species are known to exhibit genetic instability (Azuma et al., 2009). Because ethanol and acetic acid tolerance could be partly attributed to the intrinsic properties of the amino acid sequences of the two proteins and high concentrations of ethanol would not cause mutations in their sequences (Trcek et al., 2006; Zheng et al., 2015), we proposed that the high conservation of the proteins may contribute to the stable industrial performance of A. pasteurianus.

In conclusion, the complete genomes of two A. pasteurianus subspecies were sequenced and assembled into one chromosome and three plasmids. Comparative genome and sequence analyses showed that rearrangements occurred in the A. pasteurianus strains and that the ADHs and ALDHs responsible for acetic acid production were highly conserved in these strains.

BC performed the experiments. BJ and CJ analyzed the data and wrote the manuscript. GC, KK, JM, and S-HY helped in data analysis.

The reviewer, FF, and handling editor declared their shared affiliation, and the handling editor states that the process nevertheless met the standards of a fair and objective review.

This work was supported by the Cooperative Research Program for Agriculture Science and Technology Development (project nos. PJ00999302 and PJ01090604) Rural Development Administration, Republic of Korea.

The Supplementary Material for this article can be found online at https://www.frontiersin.org/article/10.3389/fbioe.2017.00033/full/#supplementary-material.

Copyright: © 2017 Jia, Chun, Cho, Kim, Moon, Yeo and Jeon. This is an open-access article distributed under the terms of the Creative Commons Attribution License (CC BY). The use, distribution or reproduction in other forums is permitted, provided the original author(s) or licensor are credited and that the original publication in this journal is cited, in accordance with accepted academic practice. No use, distribution or reproduction is permitted which does not comply with these terms.