Purpose: To evaluate the diagnostic value of the combination of whole-tumor dynamic contrast-enhanced magnetic resonance imaging (DCE-MRI) and whole-lesion texture features based on T2–weighted images for cervical cancer with parametrial invasion.

Materials and Methods: Sixty-two patients with cervical cancer (27 with parametrial invasion and 35 without invasion) preoperatively underwent routine MRI and DCE-MRI examinations. DCE-MRI parameters (Ktrans, Kep, and Ve) and texture features (mean, skewness, kurtosis, uniformity, energy, and entropy) based on T2-weighted images were acquired by two observers. All parameters of parametrial invasion and non-invasion were analyzed by one-way analysis of variance. The diagnostic efficiency of significant variables was assessed using receiver operating characteristic analysis.

Conclusion: The combination of DCE-MRI and texture analysis is a promising method for diagnosis cervical cancer with parametrial infiltration. Moreover, the combination of Ktrans, energy, and entropy is more valuable than any one alone, especially in improving diagnostic sensitivity.

The purpose of our study was to investigate the diagnostic value of the combination of whole-tumor volumetric DCE-MRI and texture features based on T2-weighted images for predicting parametrial invasion. These quantitative parameters might improve the diagnostic accuracy of cervical cancer with parametrial infiltration prior to treatment.

This study was approved by our institutional review board and the patients provided written informed consent to participate. Seventy-five patients with histopathologically confirmed cervical cancer were admitted to our hospital from September 2017 to April 2019. Routine MRI sequences and DCE-MRI examinations were preoperatively performed. Thirteen patients were excluded according to the following criteria: (1) tumor diameter was <1 cm (n = 7); (2) image quality was not available for the next analysis (n = 4); (3) diameter of the necrotic lesions in the tumor was more than 5 mm (n = 2). Finally, 62 patients (25–56 years old, mean age 45 years) were eligible for the study (27 with parametrial invasion and 35 without invasion), including FIGO stage IA (n = 14), IB (n = 9), IIA (n = 12), IIB (n = 15), IIIA (n = 7), and IIIB (n = 5).

DCE-MRI data were processed by Omni-Kinetics (O.K.; GE Healthcare, China) software. Multi-flip angle T1 mapping transformed the signal intensity into contrast agent concentration. For the evaluation of the arterial input function (AIF), a region of interest (ROI) was manually placed on the iliac artery. Tumors were outlined on each slice from DCE-MRI images in order to show the volume of interest (VOI) of the whole tumor. The DCE-MRI parameters (Ktrans [the volume transfer constant], Kep [the flux rate constant], and Ve [fractional extravascular extracellular space volume]), were calculated using a modified Tofts model.

Texture features were acquired by axial T2-weighted images with ITK-SNAP software (version 3.6.0) and O.K. software. For each patient, the VOI was calculated using ITK-SNAP software by manually delineating the ROI along the edge of the tumor on each slice for the entire tumor by referencing the corresponding contrast-enhanced images. Texture features were extracted from the delineated VOI by the O.K. software.

DCE-MRI and texture features were independently measured by two radiologists using the O.K. software (XX.L. and TT.L. with 6 years and 12 years of clinical experience, respectively, in gynecologic oncology MR imaging). Reader 1 measured DCE-MRI and texture features twice in 1 week to estimate intraobserver reproducibility, and his first measurement was compared with the measurement obtained by reader 2 to assess interobserver agreement. The mean of the two measured data of reader 1 was statistically analyzed. The intraclass correlation coefficient (ICC) of more than 0.75 edindicated good agreement. 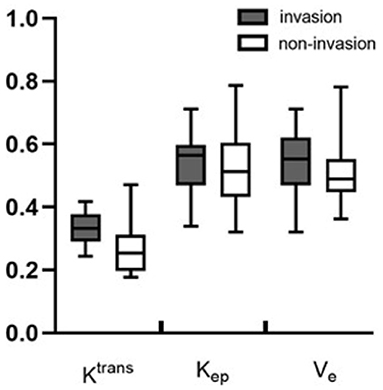 Figure 1. Boxplots of the DCE-MRI parameters of Ktrans, Kep, and Ve between the invasion and non-invasion groups. 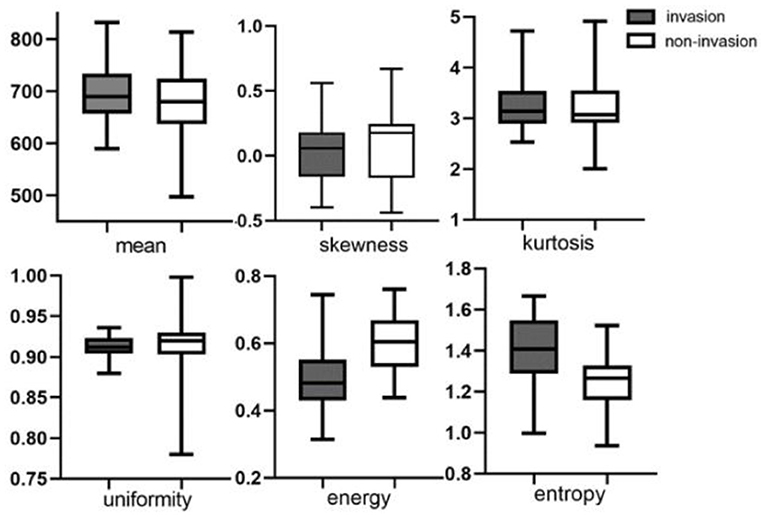 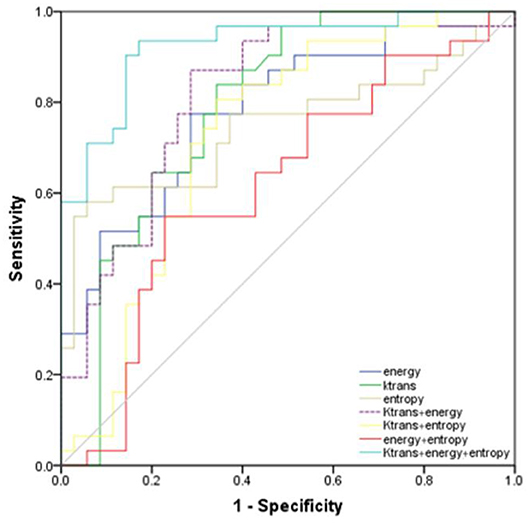 Table 2. Diagnostic efficiency of each parameter and their combined metrics.

Figure 4. A 51-year-old woman with stage IIB cervical cancer. (A) T2-weighted image (T2WI) shows a slightly hyperintense cervical mass. (B–D) Ktrans, Kep, and Ve parametric maps are derived from DCE-MRI. The corresponding values are 0.577/min, 0.639/min, 0.694. (E,F) The volume of the tumor is drawn from T2WI. (G) Histogram map of the entire tumor.

Figure 5. A 49-year-old woman with stage IIA cervical cancer. (A) T2-weighted image (T2WI) shows a slightly hyperintense cervical mass. (B–D) Ktrans, Kep, and Ve parametric maps are derived from DCE-MRI. The corresponding values are 0.196/min, 0.430/min, 0.396. (E,F) The volume of the tumor is drawn from T2WI. (G) Histogram map of the entire tumor.

Texture analysis is a new image post-processing computer technology that quantitatively analyzes the distribution rules and characteristics of image pixels and reflects lesion heterogeneity and the fine differences of tumors. Energy reflects uniformity and texture the coarseness of the images. The better distributed the gray of the image is, the greater its value. In this study, the energy value of the non-invasive group was larger than that of the invasive group, which indicated that the images of the invasive group were less uniform than those of the non-invasive group. This may be owing to the cystoid degeneration and necrosis in the invasive cervical cancer group. Entropy, reflecting the basic degree of chaos in the gray levels, is a measure of the image information. It is mainly used to evaluate the uniformity of image texture. The entropy value of the parametrial infiltration group was higher than that of the non-infiltration group, which indicated that the distribution of image pixels in the infiltration group was more discrete and disordered than that in the non-infiltration group. The reason for this difference may be related to the degree of malignancy. Several studies showed that tumors with a high degree of malignancy have high heterogeneity (Ng et al., 2013; Zhang et al., 2017a,b), and a high entropy value represents high tumor heterogeneity (Guan et al., 2017), and this is in accordance with our study showing that advanced cervical cancer representing high heterogeneity has high entropy. Guan et al. (2017) showed that cervical cancers with higher (IIB-IVA) rather than lower (IB-IIA) FIGO stages had lower energy and higher entropy of texture features based on ADC images. This result is consistent with our study showing that advanced cervical cancer has lower energy and higher entropy than early stage cervical cancer. The mean value, skewness, kurtosis, and homogeneity had no statistical significance in diagnosing cervical cancer with parametrial infiltration. These parameters may have significance if we performed multiple sequences of MRI for texture analysis.

Several limitations of the present study are as follows. First, the sample size of this study was relatively small. Second, the ROIs of the tumors were manually performed, which might increase the variability of the data measurement. Third, our study did not distinguish the pathological types of cervical cancer, such as squamous cell carcinoma, adenocarcinoma, and small cell carcinoma.

In conclusion, this study showed that the invasion group of cervical cancer demonstrated significantly higher Ktrans, lower energy values, and higher entropy values than those in the non-invasion group. Both DCE-MRI and texture analysis were valuable in the diagnosis. A combination of DCE-MRI and texture analysis may be a promising method to improve accuracy in diagnosing cervical cancer with parametrial infiltration prior to treatment and has great significance in the medical field.

The studies involving human participants were reviewed and approved by Medical research ethics board of the First Affiliated Hospital of USTC, Division of Life Sciences and Medicine, University of Science and Technology of China. The patients/participants provided their written informed consent to participate in this study. Written informed consent was obtained from the individual(s) for the publication of any potentially identifiable images or data included in this article.

This work was supported by the National Natural Science Youth Science Fund Project (No. 81501468), by the Fundamental Research Funds for the Central Universities (No. WK9110000002).

Copyright © 2020 Li, Lin, Liu and Wei. This is an open-access article distributed under the terms of the Creative Commons Attribution License (CC BY). The use, distribution or reproduction in other forums is permitted, provided the original author(s) and the copyright owner(s) are credited and that the original publication in this journal is cited, in accordance with accepted academic practice. No use, distribution or reproduction is permitted which does not comply with these terms.