Modulation of sea surface temperature in three oceans on precipitation increase over Northwest China during the past 60 years: A review

Northwest China is a typical arid and semi-arid region that is part of Central Asia. However, during the past 60 years, the climate in Northwest China has shown a warm and humid trend, with both average and extreme precipitation continuing to increase. Humidification in Northwest China is mainly caused by anomalous westward water vapor transport. Change in the water vapor transport path is directly related to the Mongolian anticyclone anomaly and weakening of the Asian summer monsoon. Our research shows that interdecadal changes in sea surface temperature (SST) in the North Atlantic, North Pacific, and Indian oceans, play an important role in interdecadal adjustment of atmospheric circulation and the wetting climate over Northwest China. Since the 1980s, the Indian Ocean has been warming continuously, and the land–sea thermal gradient has weakened, resulting in a significant reduction in water vapor transport of the Asian summer monsoon. In contrast, anomalous northerly water vapor transport from the polar region increased. Concurrently, SST over the North Atlantic is also warming, and the Atlantic multidecadal oscillation (AMO) changes from the negative to positive phase, triggering anomalous anticyclones over Mongolia, which also leads to weakening of the Asian summer monsoon. Therefore, eastern China is affected by abnormal northeast winds. These northeast winds can continuously transport water vapor to the western region of China, leading to the prevalence of easterly winds in Northwest China. Moreover, Pacific decadal oscillation (PDO) changed from the positive to negative phase after the 1990s, which promoted the East Asian westerly jet to move to the Arctic and produce easterly anomalies in East Asia and Northwest China. Interdecadal changes in SST over the Indian, North Atlantic, and North Pacific Oceans all have reduced summer water vapor from the Indian Ocean. However, water vapor from the North Pacific and high latitudes (including the polar region) can be transported to Northwest China through easterly anomalies, resulting in increased precipitation and climate humidification.

Northwest China (Figure 1), located in the center of the Eurasian continent, is one of the regions in the world where climate change is very significant and is one of the most sensitive regions to global climate change (Yang et al., 2017). Because of the distance from the ocean and blockage of humid airflow by the Qinghai-Tibet Plateau, this region has relatively low precipitation, which is typical of arid and semi-arid regions. In the early twenty-first century, Shi et al. (2003) took the lead in proposing that since the 1980s, Northwest China has experienced a climate transition from warm-dry to warm-wet, namely, as the climate warmed, temperatures, rainfall, and runoff increased significantly; glaciers are melting at speed, lake water level rose, wind and sandstorm days decreased, and vegetation has improved. Moreover, prediction results suggest that the warm and humid climate transition might be a century change (Zhou and Huang, 2010; Li et al., 2011, 2016; Wang et al., 2013, 2017; Chen et al., 2015; Ren et al., 2016; Li and Ma, 2018; Zhang et al., 2019). At that time, the period of precipitation increase was relatively short and the range of increase was relatively small. In addition, the increase in precipitation was partially offset by an increase in evapotranspiration caused by temperature rise, and there is a lack of convincing scientific explanation for the mechanism of precipitation increase. Therefore, there was no broad consensus on the problem of climate warming and humidification in Northwest China at that time (Zhang et al., 2021). In recent years, due to the obvious increase in precipitation and improvement in ecological vegetation in Northwest China, climate warming and wetting have once again become an important scientific issue of concern to Chinese academia, and more attention has been paid to the causes and mechanisms of the phenomenon. 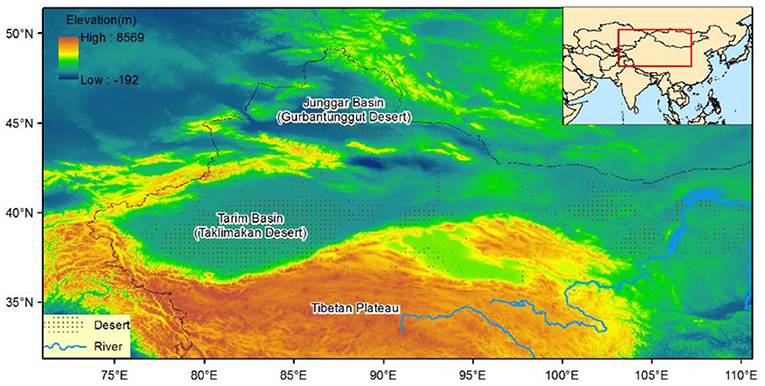 Studies have found that the East Asian summer monsoon has shown a weakening trend in recent decades, but the frequency and strength of monsoonal transport to Northwest China have significantly increased since 1958, especially since 1985, causing increasing trends of precipitation (Huang et al., 2015; Chen C. et al., 2021; Chen F. H. et al., 2021). Chen C. et al. (2021), Chen F. H. et al. (2021) believe that weakening of the East Asian summer monsoon is in step with the westward shift of the western Pacific subtropical high and strengthening of the Mongolian anticyclone activity, which promotes westward transportation of summer water vapor from the Indian and Pacific Oceans. Owing to the sustained east wind generated by the Mongolian anticyclone in northern China, westward transportation of water vapor can be further transported to Northwest China along the northern periphery of the Tibetan Plateau, which is important for the increase in precipitation in Northwest China. Additionally, under global warming, changes in sea surface temperature (SST) over the Pacific, Indian, and Atlantic Oceans are considered to affect westerly and monsoonal water vapor transport, thus affecting precipitation in East Asia and Northwest China (Si and Ding, 2016; Li et al., 2017; Liu, 2018; Lu et al., 2019; Shang et al., 2019). 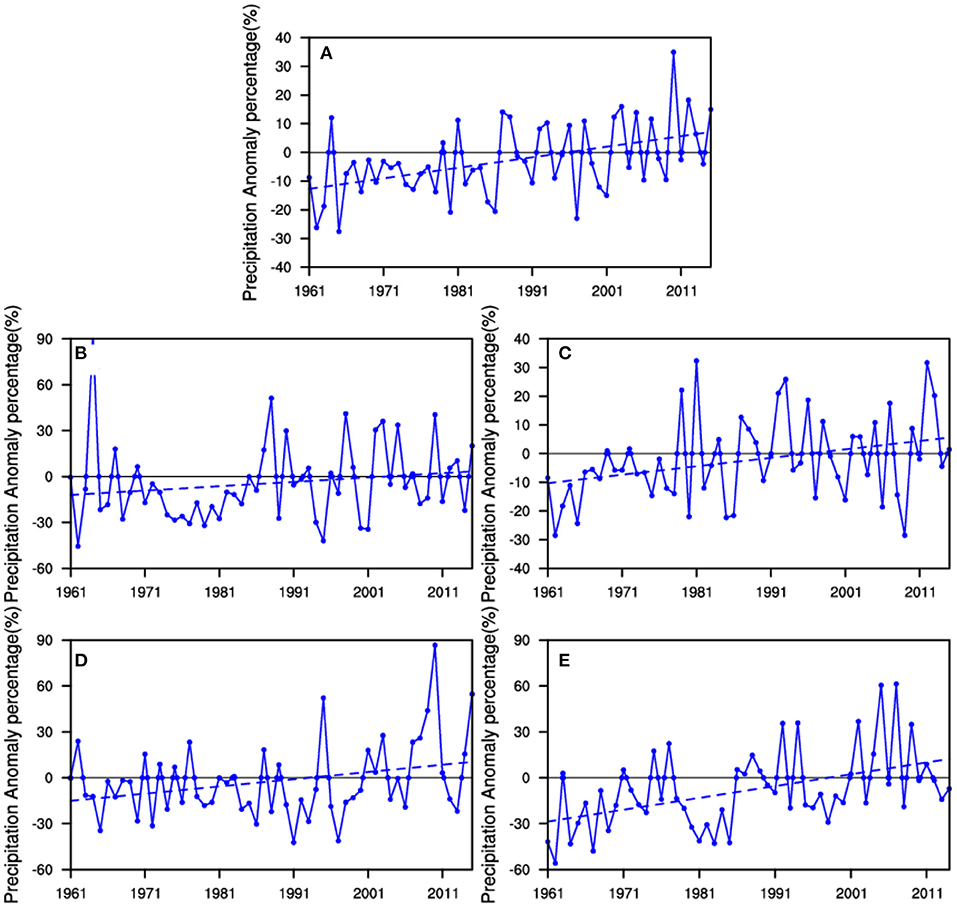 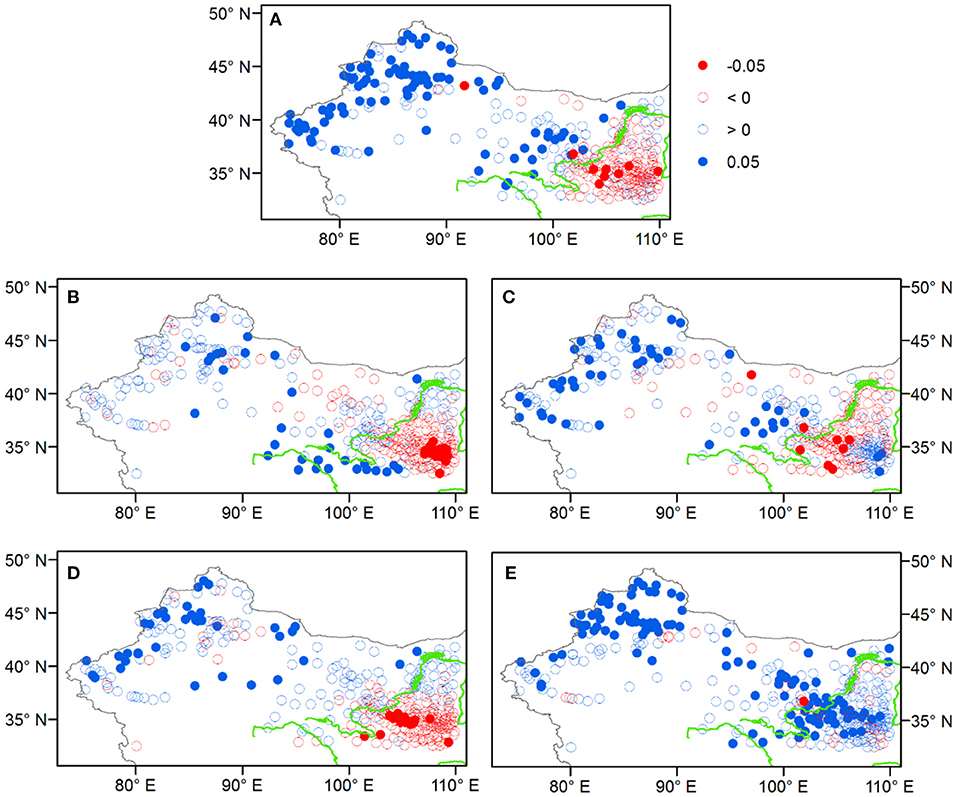 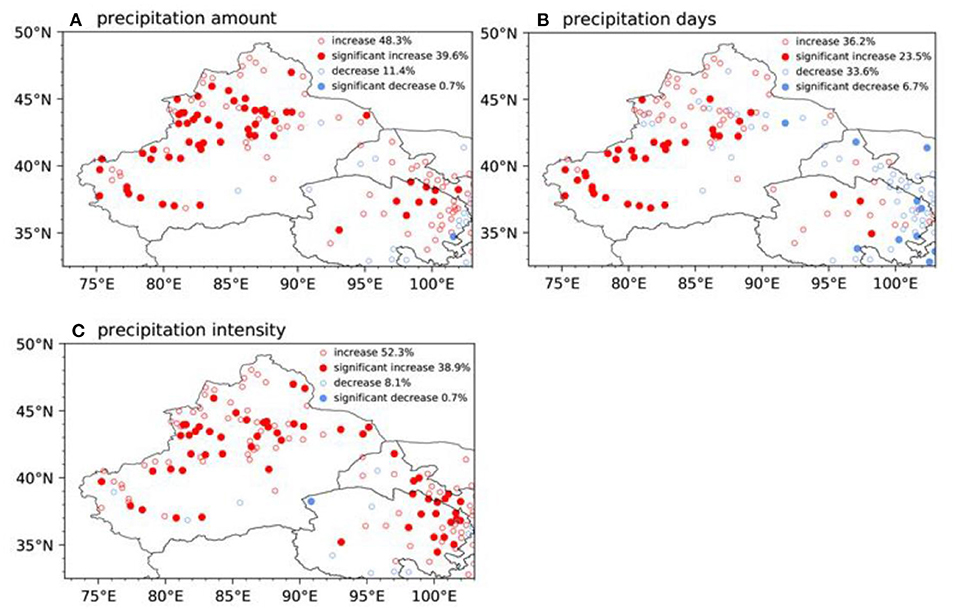 Influence of SST over the North Pacific, North Atlantic and Indian Oceans on Northwest China humidification 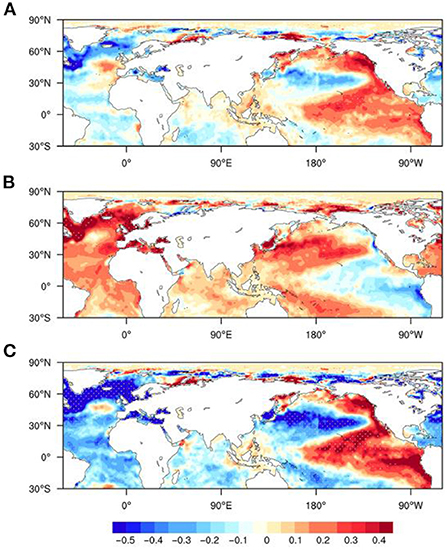 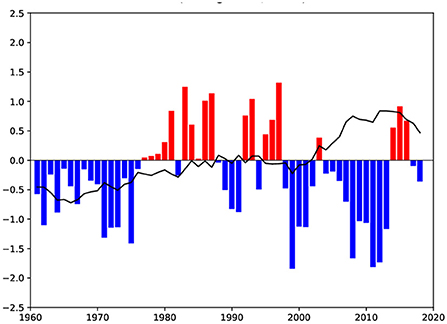 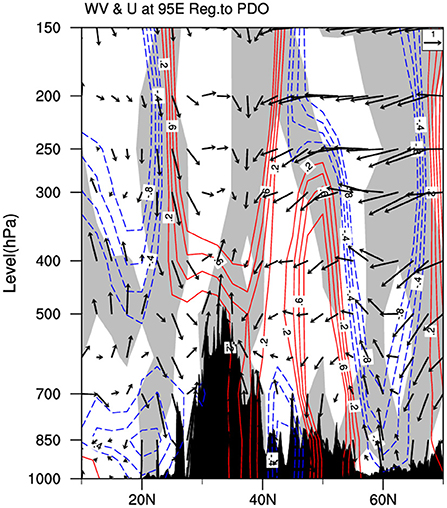 Figure 9. Regression of meridional-vertical wind (vectors) and zonal wind (contours) along 95°E against the PDO index. Unit of vertical velocity ω is 0.2 × 10−2 Pa/s, and unit for zonal wind u and meridional wind v is m/s. Shaded areas denote significance at the 95% confidence level.

The Atlantic multidecadal oscillation (AMO) is a quasi-periodic warm and cold abnormal change in SST with a basin scale in space and multi-decade scale in time in the North Atlantic. Its cycle is 65–80a, which is the natural variability of the climate system. Studies have found that AMO had an important impact on the world climate and in China (Si and Ding, 2016; Li et al., 2017). AMO can affect its downstream region through teleconnection generated by Rossby wave energy propagation (Li et al., 2017; Liu et al., 2019). In the warm AMO phase, cyclonic and anticyclonic circulation in the upper troposphere are alternately arranged along the Rossby propagation path. In East Asia, sea level pressure has a positive—negative—positive distribution, and vertical coupling between the anticyclone at the upper level and low pressure at the lower level is conducive to forcing upper-level divergence. This up-down coupling circulation is conducive to an ascending motion in Northern China and increasing precipitation in this region. In the AMO cold phase, the opposite result was obtained (Figure 10). 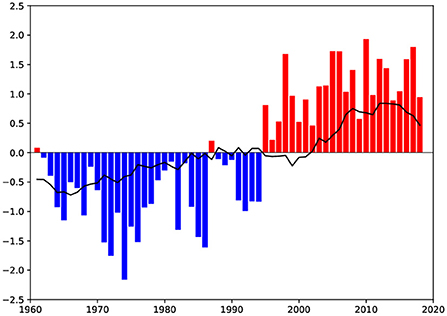 Figure 12. Regression of geopotential height at 500 hPa (shading, unit: gpm) and winds at 700 hPa (vectors, unit: m/s) against the AMO index (a). A and C denote the centers of anomalous anticyclones and cyclones, respectively. Blue arrows and black dots denote significance at the 95% confidence level (Wu et al., 2022).

Since the 1980s, the equatorial and southern Indian Oceans have warmed significantly in summer, while there has been no significant trend in temperature over the Indian subcontinent (Figure 13). The land-sea thermal and sea-level pressure gradients have declined, weakening the strength of the Indian summer monsoon (Gao et al., 2018). It can be seen from Figure 14 that Indian Ocean SST has changed from the cold phase to warm phase since the mid-1980s. Warming of the Indian Ocean can induce anomalous high-pressure centers near Mongolia Baikal Lake and the Aleutian Islands at 500 hPa, and anticyclone circulation anomalies at 700 hPa (Figure 15). Moreover, warming of the Indian Ocean led to the generation of anomalous northerlies over East Asia and weakened the Indian summer monsoon, which reduced the warm and wet water vapor transported from the Indian Ocean and the South China Sea to the central and eastern parts of China, while increasing moisture transport from the Arctic and North Pacific to Northwest China with the Mongolian anticyclone anomaly providing favorable moisture conditions for increase in precipitation over Northwest China (Wu et al., 2022). 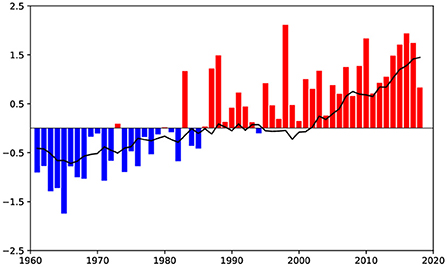 Under global warming, the interdecadal transformation of SST over the North Atlantic, North Pacific, and Indian Oceans has an important impact on global climate and climate change in Northwest China. Since the 1980s, the warmer Indian Ocean has contributed to a significant decrease in summer monsoon water vapor transport. At the same time, the AMO changed from the negative to positive phase, which can trigger the Mongolian anticyclone circulation anomaly, leading to the weakening of the Asian summer monsoon and affecting Northwest China under moderation of the easterly air flow. After the 1990s, PDO changed from the positive to negative phase, which changed position of the westerly jet in East Asia, resulting in easterly anomalies in East Asia and Northwest China. Interdecadal changes in SST over the Indian, North Atlantic, and Pacific Oceans all reduce summer water vapor transport in Asia and cause easterly anomalies in Northwest China. In the future, water vapor will be transported from the North Pacific and high latitudes into Northwest China, resulting in more precipitation.

This study expounds on how the three oceans affect climate change over Northwest China, but it does not explain how they cooperate with climate change, especially when the timing of phase transitions of the PDO, AMO, and Indian Ocean warming are not consistent with each other. Since the 1990s, PDO has changed from the positive to negative phase, while precipitation in Northwest China has increased rapidly. Whether the influence of PDO on precipitation change in Northwest China is weakening, while the influence of SST change in the North Atlantic and Indian Oceans is increasing, needs to be further studied. In addition, there is no conclusion on how changes in SST over the three oceans quantitatively affects the increase in extreme precipitation over Northwest China. These problems need to be studied in the future. In the past two decades, the Arctic has been warming rapidly and sea ice has decreased sharply (Screen and Simmonds, 2010; Stroeve et al., 2011). Zeng and Sun (2021) found that decadal decrease of sea ice over the Barents Sea intensified the Mongolian high, which may indicate that warming of the Arctic and reduction of sea ice also contributes to climate humidification in Northwest China.

YD and PW: writing—original draft preparation. YL: writing—review and editing. All authors agree to be accountable for the content of the work. All authors contributed to the article and approved the submitted version.

We thank all colleagues in the climate change research in the Northwest China in for their help in writing this review.

Copyright © 2022 Ding, Wu and Liu. This is an open-access article distributed under the terms of the Creative Commons Attribution License (CC BY). The use, distribution or reproduction in other forums is permitted, provided the original author(s) and the copyright owner(s) are credited and that the original publication in this journal is cited, in accordance with accepted academic practice. No use, distribution or reproduction is permitted which does not comply with these terms.

Interactions among Climates of Ocean Basins