Objectives: Clinical trials of either pulmonary perfusion or ventilation during cardiopulmonary bypass (CBP) are equivocal. We hypothesized that to achieve significant improvement in outcomes both interventions had to be concurrent.

Interventions: The outcomes of 86 patients who received pulmonary perfusion and ventilation during CBP were retrospectively compared to the control group of 188 patients.

Conclusion: Simultaneous pulmonary perfusion and ventilation during CBP were not associated with improved clinical outcomes.

Pulmonary dysfunction after open heart surgery is multifactorial. The relative contributions of various pathophysiologic factors remain obscure despite enormous experimental and clinical efforts (1–3). Cessation of alveolar ventilation and perfusion engendered in traditional technique of cardiopulmonary bypass (CPB) are thought to potentiate the effects of systemic inflammatory reaction associated with CPB and to contribute to postoperative pulmonary dysfunction. However, despite initial enthusiasm, attempts to mitigate iatrogenic atelectasis and alveolar ischemia had very limited impact on postoperative pulmonary dysfunction (4–7). We have argued in the past (8) that the disappointing inconsistency of these clinical trials stemmed from their focus on either pulmonary perfusion or ventilation but never on both simultaneously; we had proposed that binary interventions of either ventilation of ischemic alveoli or perfusion of atelectatic lungs were of unlikely benefit, and that to achieve favorable outcomes both interventions had to be concurrent; lungs had to be both perfused and ventilated during CPB (9). Therefore, we have studied the effects of simultaneous pulmonary perfusion and ventilation during CPB in comparison to traditional management of CPB. We hypothesized that the pulmonary perfusion and ventilation was a safe technique that had the potential to reduce the incidence and severity of postoperative pulmonary dysfunction in patients undergoing open heart surgery.

Following Institutional Review Board (IRB) approval, the medical records of 274 consecutive patients who underwent a cardiac valve procedure at Jackson Memorial Hospital/University of Miami between January 1, 2009 and December 30, 2013 were reviewed. No specific criteria were implemented other than cardiac surgery requiring CBP during the designated time frame. All data were anonymized before analysis. The informed consent for this retrospective study was waived.

All perioperative data were obtained from the electronic medical records. The collected data included multiple descriptors of patients’ demographics, comorbidities, details of intraoperative course, perioperative transfusion requirements, duration of the intensive care unit (ICU) and hospital stays, and perioperative mortality and morbidity events. Postoperative pulmonary complications, re-intubation rates, need for postoperative re-exploration and transfusion, and adverse neurologic and renal events were all included in the analysis.

As a matter of surgical preference, in all patients, every attempt was made to avoid or to minimize the duration of cardioplegic arrest utilizing the “beating heart technique” (10, 11). While the systemic circulation was supported by CPB, the unloaded (“empty”) beating heart was continuously perfused (both in antegrade and retrograde fashion) with warm oxygenated blood. In certain circumstances, such as a difficult valve exposure, an excessively bloody field, or a perceived increased risk of embolization, cardioplegic arrest was induced. All the decisions regarding the administration of hyperkalemic cardioplegia and the duration of cardioplegic arrest were made by the surgeon based on the technical aspects of the surgery.

In the control group, pulmonary ventilation was suspended for the duration of the CPB, and no attempt was made to perfuse the pulmonary artery. In the cohort of interest, the following technique was used: pulmonary ventilation was maintained with inspired oxygen fraction (FiO2) of 0.5, tidal volumes of 4–6 ml/kg of ideal weight, at a rate of 5 breaths/min, and end-expiratory pressure (PEEP) of 5 mmH2O. The pulmonary artery was perfused via a 3-mm diameter perfusion cannula attached to the aortic cannula. In this setup, pulmonary artery perfusion depended on the CPB flow and pressure, tubing length and resistance, and blood viscosity. At systemic flows of 2.4 l/min/m2 and mean arterial pressures of 60 mmHg, Doppler-measured average pulmonary arterial flows ranged between 400 and 500 ml/min. Presence of the alveolar perfusion was confirmed by steady values of end-tidal CO2 on continuous capnography (12). The decision to utilize the pulmonary perfusion and ventilation during CPB was exclusively the surgeon’s.

Descriptive statistics were used to describe all variables of interest within each of the comparison groups (lung perfusion/ventilation group vs. conventional technique group). Mean values and SDs were calculated for continuous variables that approximately follow the normal distribution and Student’s t-tests were then used to compare the groups. Median values and interquartile ranges (IQR) were calculated for variables that were highly skewed and Wilcoxon’s rank-sum tests were then used for comparison between the groups. Frequencies and proportions were used to analyze categorical variables. Chi-square tests or Fisher’s exact tests were then used depending on the expected cell counts, to compare difference in proportions between the groups and to examine the overall trends. Due to the amount of comparisons performed, a Bonferroni adjusted type I error rate of 0.00091 was assumed for significance. All analyses were performed using SAS 9.4 (SAS Institute, Cary, NC, USA). 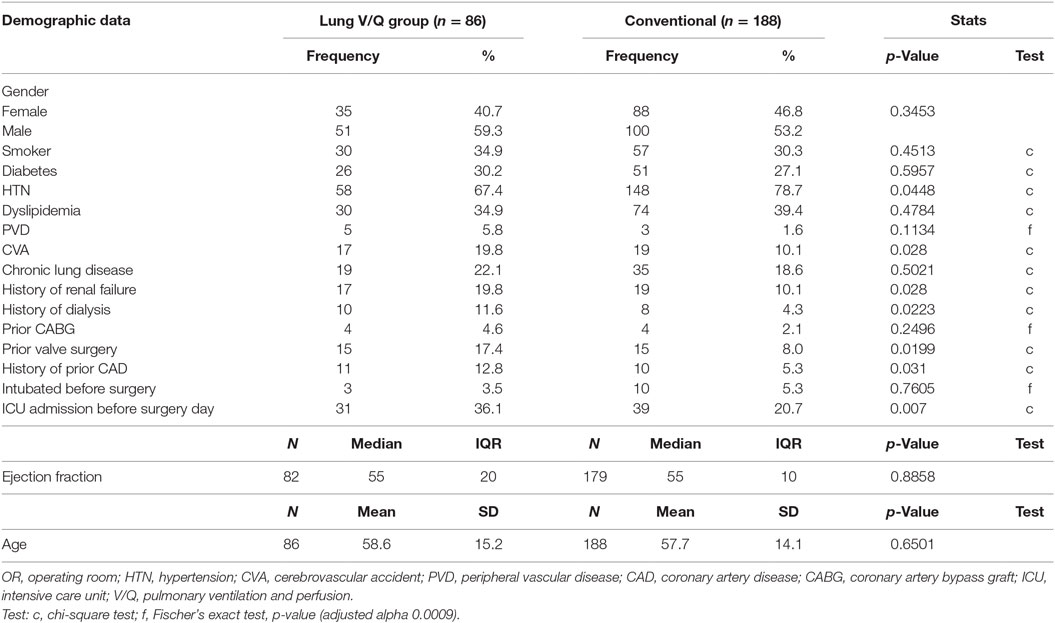 Table 2 specifies the types of surgical procedures and summarizes the intraoperative data. In both groups, single valve surgery was the most common (77.9% in the cohort of interest vs. 80.9% in the control group); rates of multiple valves surgery (10.5 vs. 7.5%) and of combined valve and CABG procedures (11.6 vs. 11.7%) were similar in both groups (p = 0.703). Transfusion rates (calculated as fraction of patients requiring at least 1 U of autologous blood, %) (94.2 vs. 95.7%) and the average duration of surgery (time from the surgical incision to the end of surgery) were equal in both groups (4.5 vs. 4.7 h).

Table 5 lists the mortality events for both groups. Cardiac failure was the leading cause of mortality in patients after pulmonary perfusion and ventilation during CPB (8 out of 14 patients). Multisystem organ failure [defined as systemic inflammatory response syndrome (SIRS) with or without documented systemic infection] contributed to mortality in four patients, and respiratory failure (defined as persistent, severe, and refractory hypoxemia) was seen in three patients. In the control group, 8 out of 16 patients succumbed to septic complications and SIRS with multisystem organ failure, 8 to postoperative cardiac failure, and 4 to severe respiratory failure. Overall mortality rates, though higher in the cohort of interest, were not statistically different (16.3 vs. 8.5%, p = 0.056).

Studies of alveolar ventilation during CPB suffer from a similar dichotomy between in vivo findings and clinical outcomes. In a pig model, Imura et al. (17) demonstrated preservation of transalveolar gas change and metabolic and histologic evidence of protective effects of low-frequency ventilation on histoarchitecture and function of alveolar membrane. However, these protective effects were not clinically evident (6), likely due to large data variability and insufficient study size. In an attempt to increase the power of these studies, a meta-analysis was performed of 16 clinical trials with a total enrollment of 814 patients (7). Various methods of ameliorating iatrogenic atelectasis during CPB included continuous positive alveolar pressure, low-frequency ventilation, and vital capacity recruitment maneuvers. Irrespective of the method, the clinical effects were short lived and did not impact the outcomes.

Outcome studies of fully maintained pulmonary perfusion and ventilation during bypass as in the Drew–Anderson technique (bilateral extracorporeal circulation without a membrane oxygenator, using patients’ lungs as a natural oxygenator) are not without controversy as well. Richter et al. (18) reported a significant decrease in inflammatory cytokines with clinically significant improvements in hemostasis, postoperative pulmonary function, and shorter times of mechanical ventilator support. However, a recent animal study of the same technique (19) did not find any change in inflammatory cytokines production by pulmonary tissue despite electron microscopy evidence of the mitigating effects of pulmonary perfusion and ventilation on polymorphonuclear leukocytes infiltration, interstitial edema formation, and histoarchitecture disruption associated with conventional CPB.

Translating theoretical concepts into clinical outcomes remains an ever-elusive goal. Even such well-established concepts as the deleterious effects of inflammatory cytokines still await their correlation with specific clinical end-points. While Siepe et al. (20) attributed the protective effects of pulmonary perfusion during CPB to the decreased pulmonary tissue expression and blood concentration of inflammatory cytokines, such as IL-6, IL-8, IL-10, and TNF-α, and others (5, 15, 19) could not reproduce these effects. Likewise, despite avoidance of CPB, pulmonary atelectasis and activation of inflammatory cascades associated with pulmonary ischemia–reperfusion injury, off-bypass technique of coronary revascularization offers only a modest clinical impact on pulmonary outcomes in patients with severe pulmonary disease (21–23).

Absence of proof is not a proof of absence. Nevertheless, an apparent lack of clinically significant benefits of pulmonary perfusion and ventilation during CPB begs for an explanation. We could speculate that in a milieu of multiple concurrent operational pathophysiologic mechanisms, mitigating some of the variables may not translate into an observable clinical effect (24). Patients in both groups had comparable incidences of non-modifiable risks of postoperative pulmonary dysfunction and ventilator dependency such as advanced age, reduced preoperative pulmonary function, smoking, renal insufficiency, recent myocardial infarction, and reduced left ventricular function. Untoward effects of CBP may be confounded by altered pulmonary mechanics due to sternothomy, internal mammary artery harvest, pleural entry, and phrenic nerve injury (3, 23, 25–27). In the present study, the majority of the patients in both groups were exposed to blood products perioperatively, an additional and a significant confounding factor associated with a possibility of a delayed lung injury (28). There is also a growing appreciation for the importance of factors not included in our study, such as right ventricular (RV) function and mode of perioperative ventilation. Even though RV performance is not included yet in STS risk score calculation, it had emerged as an important independent factor for perioperative morbidity and mortality in some critically ill populations (29, 30). Similarly, the impact of ventilation strategies on RV pulmonary blood flow functionality and on pulmonary and overall outcomes is increasingly understood and appreciated (31–35). Additionally, the institutional structure, and expertise and experience of individual surgeons, anesthesiologists, and intensivists (23, 36, 37) may be important, but difficult to quantify. While the institutional bias was eliminated in our study, effects of interprovider variability could not be reliably ruled out.

Our study suffers from multiple limitations. It is retrospective and could not be randomized, and strong interprovider variability is likely. A small sample size may have prevented the detection of some significant differences. Some factors, such as RV function and rationale for various decisions and management preferences, were not recorded and their contribution to postoperative outcomes remains unknown. A retrospective differential diagnosis to establish the relative contributions of cardiac and pulmonary pathology in mortality events was difficult in many cases. Nevertheless, we believe the validity of our study, since the largely negative results were obtained despite shorter CPB and cross-clamp times and higher rates of extubation in the OR in the cohort of interest.

In conclusion, our data failed to demonstrate any clinical benefits of simultaneous pulmonary perfusion and ventilation during CPB. It underscores the difficulty to translate attractive theoretical concepts tested in small in vivo studies into clinical practice. We believe that multiple confounders and outliers inherent in the care of heterogenous populations may account for our largely negative results. It is eminently possible that the described technique of simultaneous pulmonary perfusion and ventilation during CPB may prove of benefit in highly select groups of patients, such as elderly, those with significant preoperative pulmonary comorbidities, and those with advanced and symptomatic heart failure. As our database is expanded, we hope to be able to differentiate the outcomes of simultaneous pulmonary perfusion and ventilation during CPB according to the type and the severity of preoperative pulmonary comorbidity. Further investigations of the effects of this technique in critically ill patients are needed.

Copyright: © 2016 Rodriguez-Blanco, Gologorsky, Salerno, Lo and Gologorsky. This is an open-access article distributed under the terms of the Creative Commons Attribution License (CC BY). The use, distribution or reproduction in other forums is permitted, provided the original author(s) or licensor are credited and that the original publication in this journal is cited, in accordance with accepted academic practice. No use, distribution or reproduction is permitted which does not comply with these terms.