Vascular smooth muscle cell (VSMC) migration is an important step in the progression and development of vulnerable plaques. Thrombin is involved in both physiological and pathological processes of atherosclerosis. Therefore, the elucidation of the mechanisms underlying thrombin-induced VSMC migration is essential for devising effective treatments aimed at the prevention of plaque instability. In this study, we found that thrombin activated MAPK signaling pathways and increased the expression of galectin-3, which was also a well-known factor in atherosclerosis. Knockdown of galectin-3 by specific small interfering RNA (siRNA) blocked thrombin-induced activation of ERK1/2 and p38 MAPK, but not JNK MAPK. Src/FAK phosphorylation was also shown to be activated by thrombin. FAK autophosphorylation at Y397 was most significantly inhibited by galectin-3 siRNA. Galectin-3 siRNA or specific inhibitor (P38 MAPK inhibitor and ERK1/2 inhibitor) effectively prevented thrombin-induced VSMC migration via reducing paxillin expression. These findings demonstrate, for the first time, that thrombin stimulation of VSMC migration and paxillin expression are regulated by galectin-3, and ERK1/2, p38 MAPK, and Src/FAK signaling pathways are involved in this process. These results are beneficial to clarify the role of galectin-3 in thrombin-induced advanced lesions in atherosclerosis and shed new insights into the regulatory mechanism of VSMC migration in combating plaque rupture.

Galectin-3 (Gal-3), a 29- to 35-kDa protein, is a member of the β-galactoside-binding lectin family (11). Gal-3 is widely spread in heart, vessels, lung, bone, muscle, liver and kidney, and related to fibrosis (11, 12). In the coronary heart disease patients, gal-3 was proved to be an important prognostic biomarker in MI (13). Gal-3 level increases in patients with ischemic heart disease; besides, there is a significant relationship between gal-3 level, MI size, and left ventricle (LV) remodeling (13, 14). Acute MI increases gal-3 level, which is positively correlated with left ventricular ejection fraction (LVEF) (14, 15). Besides, in our previous research, gal-3 was found to promote VSMC migration via the Wnt/β-catenin signaling pathway (16).

Until now, the role of gal-3 in physiological and pathological processes of atherosclerosis is still unclear; in particular, we still do not know how gal-3 regulates thrombin-induced VSMC activation. The aim of this study was to explore the role of gal-3 in thrombin-induced VSMC migration. In this study, we examined gal-3 expression in thrombin-stimulated VSMCs. The activation of related signaling pathways was also investigated to determine the probable regulatory mechanisms.

Primary coronary artery smooth muscle cells were obtained from the American Type Culture Collection (ATCC, Rockville, MD, USA). VSMCs were maintained in DMEM supplemented with 10% FBS and 1% penicillin/streptomycin at 37°C, 5% CO2 incubator. In order to allow cells into the relatively same condition, VSMCs were cultured in DMEM without serum for 12 h before further experiments. We performed our further experimentations by using the cells at a density of 10 (5)/well in six-well-plates.

siRNA method was performed to inhibit gal-3 expression. Briefly, 5 × 10 (5) VSMCs per well were cultured in six-well-plates to 75% confluence. The cells were then transfected with gal-3 siRNA with Lipofectamine® 2000. The process of transfection was performed in the absence of antibiotics. Following 48 h incubation, the cells were used for other experiments. The human gal-3 siRNA sequence was 5'-CCUCGCAUGCUGAUAACAATT-3', and the scrambled siRNA sequence was 5'-UUGUUAUCAGCAUGCGAGGTT-3'. siRNA was synthesized by Biotend (Shanghai, China).

Cell migration was analyzed by transwell method (17, 18). Briefly, following cellular transfection with gal-3 siRNA or scramble siRNA, VSMCs were resuspended in DMEM and loaded into the upper chambers (Corning Inc., Corning, NY, USA). The lower chambers were filled with DMEM in the presence or absence of 2 U/ml thrombin. After 24-h incubation for 37°C, the lower side of the filter was washed and fixed prior to being stained with 4′,6-diamino-2-phenylindole (DAPI; 1:1,000; Sigma-Aldrich) for 5 min. The cells were counted using a microscope in three random high-power fields (magnification, ×100) for each well.

Cells were lysed with 100 mM phenylmethanesulfonyl fluoride. Protein concentrations were measured with the BCA Protein Assay. The lysates (20 μg) were electrophoresed on 10% SDS-PAGE and transferred to nitrocellulose membranes (Merck Millipore, Danvers, MA, USA). The membrane was blocked with 5% non-fat dry milk in TBST buffer (100 mM NaCl, 10 mM Tris-HCl, pH 7.4, and 0.1% Tween-20) for 1 h at room temperature. The membrane was then incubated with diluted primary antibodies (1:1,000) at 4°C overnight, and then washed twice with TBST buffer and incubated for 1 h with secondary antibody at room temperature. ImageJ was used to quantity the protein by assessing band intensity.

Data were presented as the mean ± SEM and analyzed by one-way ANOVA followed by the Student–Newman–Keuls post-hoc analyses when appropriate. Non-parametric ANOVA (Kruskal–Wallis test) was used when the data did not pass the normality test. p < 0.05 was considered statistically significant. All experiments were performed at least three times.

The pivotal role of gal-3 in atherosclerosis is well-known (19). Therefore, we analyzed the effect of thrombin on gal-3 expression. VSMCs were cultured in DMEM without serum for 12 h, after that, we used 2 U/ml thrombin to deal with VSMCs for different times (0, 0.5, 1, 6, 12, 24, and 48 h), besides, we also used different concentration of thrombin (0, 0.25, 0.5, 1, and 2 U/ml) to deal with VSMCs for 24 h, and then we observed gal-3 expression by using qRT-PCR and WB (Figure 1). We found that thrombin induced gal-3 expression in a time- and concentration-dependent manner.

Thrombin induces a variety of proteins, which triggers coagulation systems, increases vascular permeability, and induces granulocyte chemotaxis (20). Here, we observed the effect of thrombin on VSMC migration. First, VSMCs were cultured in DMEM without serum for 12 h. After that, the serum-starved VSMCs were treated with thrombin (2 U/ml) for 24 h. As shown in Figure 2B, thrombin treatment significantly promotes VSMC migration. 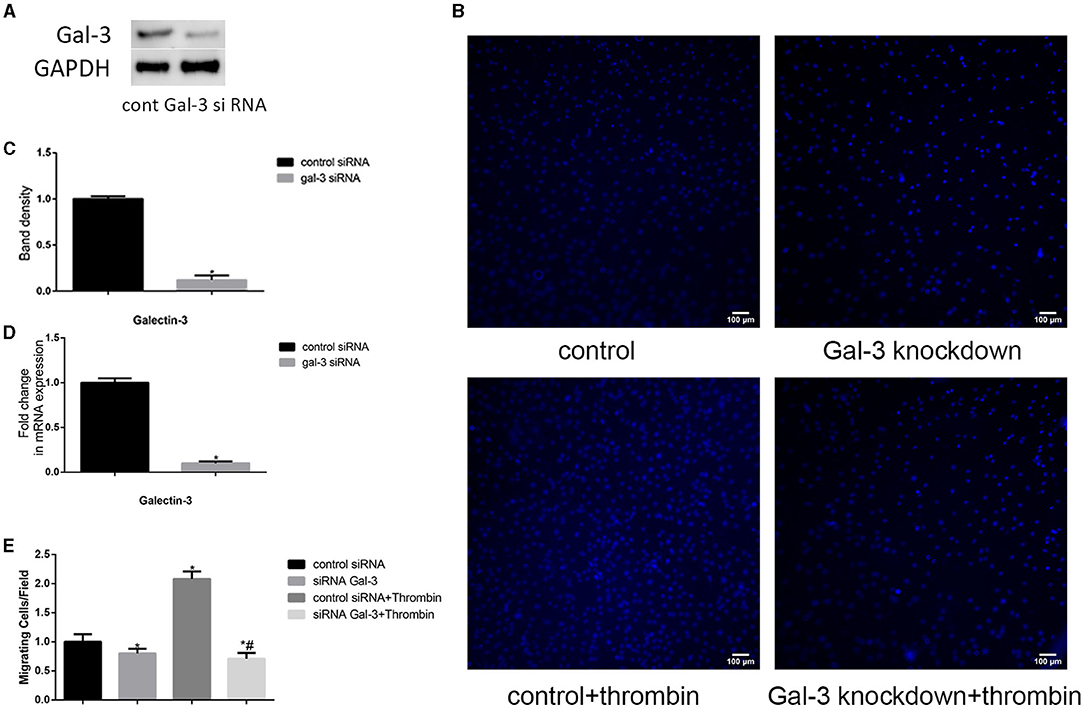 Figure 2. Gal-3 mediated thrombin-induced VSMC migration. VSMCs were transfected with gal-3 siRNA for 24 h. The mRNA and protein expression levels of gal-3 were measured by qRT-PCR and Western blotting separately. Western blot and qRT-PCR results of gal-3 are shown (A,C,D). Band density of VSMCs transfected with scramble siRNA was chosen as a reference and set to 1. *p < 0.05 vs. the control. After transfection with either control or gal-3 siRNA for 24 h, VSMCs were added in the upper chamber. After treatment with thrombin (2 U/ml) for 24 h in the lower chamber, migrated cells from the upper chamber to the lower surface were counted in five non-overlapping fields under a microscope (×100) (B,E). These blue stains are the nucleus of VSMCs that were stained with DAPI. Control siRNA transfected VSMCs were chosen as a reference and set to 1. *p < 0.05 vs. control; #p < 0.05 vs. thrombin.

Previous studies indicate that MAPK signaling pathways regulate cell migration (21). In our research, we used 2 U/ml thrombin to treat VSMCs over a range of times (0–60 min); we found that thrombin significantly stimulated ERK, p38, and JNK in VSMCs (Figures 3A,B). To further explore whether gal-3 was involved in thrombin-induced MAPK signaling pathway activation, VSMCs were first interfered with gal-3 siRNA for 24 h before incubating with thrombin for 30 min. We found that gal-3 inhibition significantly prevented the phosphorylation of ERK1/2 and p38, but had little effect on JNK activation (Figures 3D,E). These results indicated that gal-3 mediated thrombin-induced phosphorylation of ERK1/2 and p38. These two signaling pathways are both involved in cell migration. We next further examined VSMC migration after treatment with ERK1/2-specific inhibitor (PD98059) or p38-specific inhibitor (SB203580). After incubating with either SB203580 or PD98059, VSMCs were added in the upper chamber. After treatment with thrombin (2 U/ml) for 24 h in the lower chamber, migrated cells from the upper chamber to the lower surface were counted. As shown in Figures 3C,F, ERK1/2 and p38-specific inhibitor obviously reduced VSMC migration; furthermore, increase in VSMC migration induced by thrombin was also abrogated by ERK1/2 or p38-specific inhibitor. 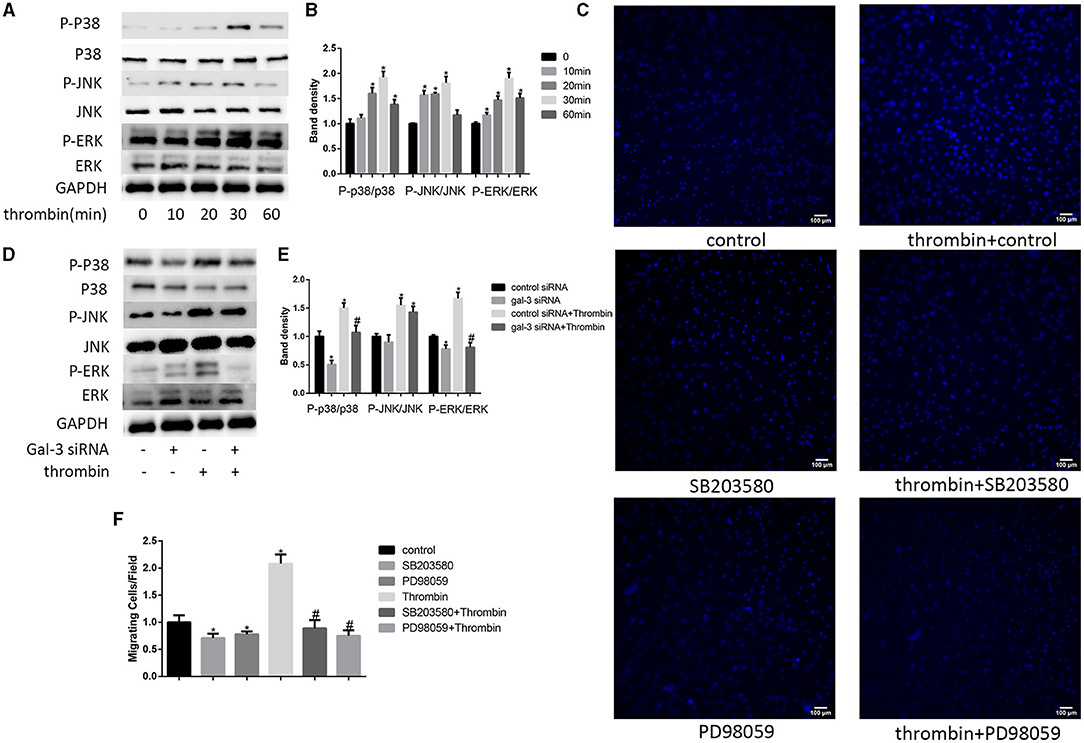 Paxillin, a focal adhesion-associated protein, mediates the protein–protein interaction and regulates cell dynamic migration (22, 23). In our research, VSMCs were treated with thrombin (2 U/ml) for different times (0, 10, 20, 30, and 60 min) and the expression of p-paxillin was measured by Western blot. We found that thrombin enhanced paxillin phosphorylation at the tyrosine 31 in a time-dependent manner (Figures 4A,B). In order to furtherly explore the role of gal-3 and its downstream signaling pathways (ERK and p38 signals) in thrombin-induced paxillin phosphorylation. We specifically knocked down gal-3 expression or blocked ERK/P38 signaling pathways. VSMCs were treated with gal-3 siRNA for 24 h, or PD98059 (ERK inhibitor) or SB203580 (p38 MAPK inhibitor) for 1 h and then stimulated with 2 U/ml thrombin for 30 min. The phosphorylation of paxillin can be effectively inhibited by gal-3 siRNA, PD98059, or SB203580, suggesting that ERK/P38 inhibition results in the decrease of thrombin-induced paxillin phosphorylation (Figures 4C,D). 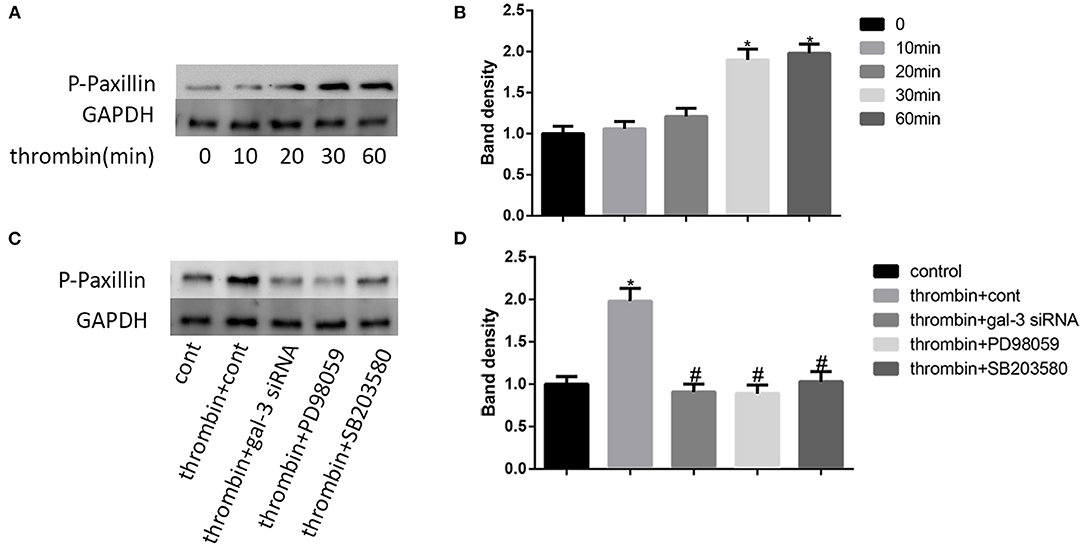 It has been proven that src signaling pathway and its substrate focal adhesion kinase (FAK) mediated cell migration (24). More important, FAK has been regarded as a kinase to phosphorylate paxillin. Here, we examined the impact of thrombin on FAK phosphorylation. We used 2 U/ml thrombin to deal with VSMCs for different times (0, 10, 30, and 60 min), and the expression of p-src and src, the phosphorylation of FAK at Tyr-397,−576/577, and−925, and FAK were measured by Western blot. Our results indicated that thrombin increased src phosphorylation as well as the phosphorylation of FAK at Tyr-397,−576/577, and−925; the most pronounced increase was seen on the Tyr-397 phosphorylation site (Figures 5A,C). We further analyzed the effect of gal-3 knockdown on src and FAK expression. After transfection with either control or gal-3 siRNA for 24 h, VSMCs were incubated for 30 min in the absence or presence of thrombin (2 U/ml). Compared to their control groups, gal-3-siRNA transfected cells have an obvious decreased expression tendency of phosphorylated src, Tyr-397, and Tyr-576/577; meanwhile, the phosphorylation of Tyr-925 was not significantly decreased after gal-3-siRNA treatment (Figures 5B,D). Altogether, gal-3 mediated thrombin-induced VSMC migration via the Src/FAK signaling pathway. 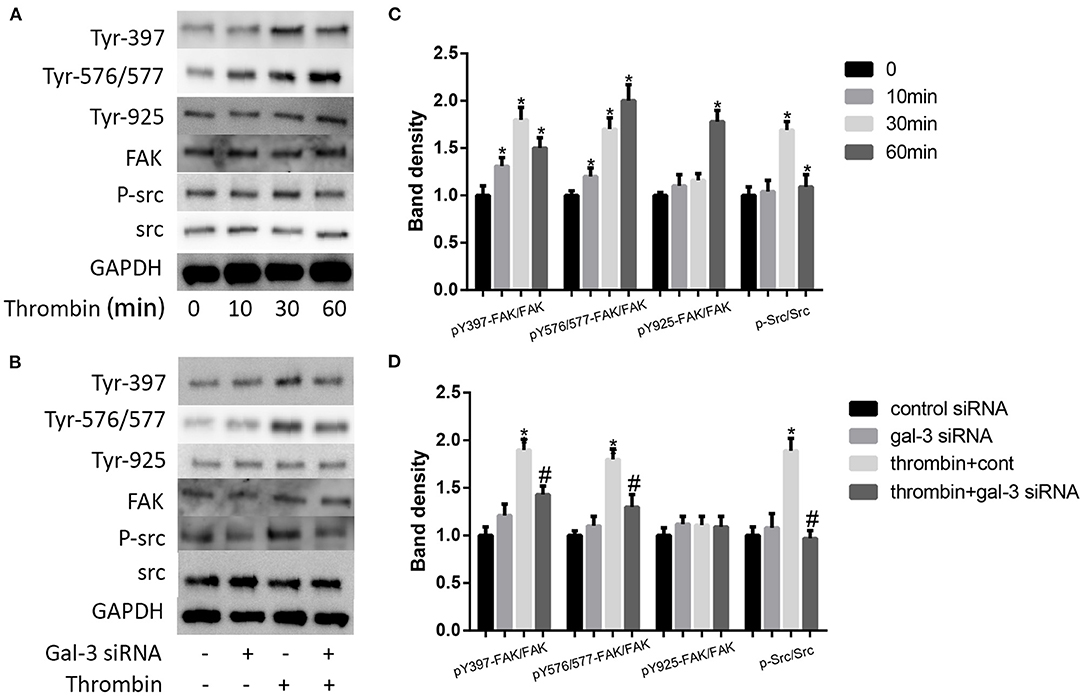 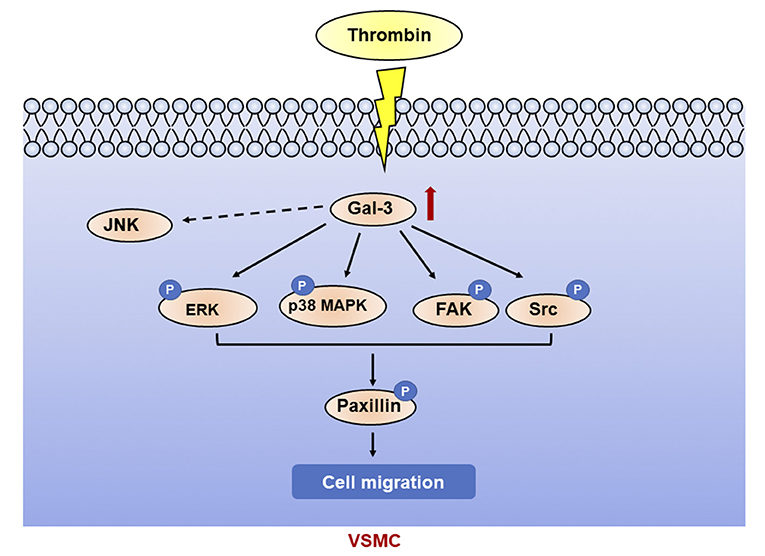 The VSMC migration from media to intima plays a crucial role in both physiological and pathological processes of atherosclerosis. Numerous studies have demonstrated that thrombin promotes cellular migration (25, 26). Gal-3 is an anti-adhesive factor that promotes SMC migration and may accelerate atherogenesis (16, 27). In our research, we found that thrombin increased gal-3 expression. In order to explore how these two factors get involved in cell migration, we then analyzed the role of gal-3 in thrombin-induced migration in VSMCs. VSMCs transfected with gal-3 siRNA have impaired ability of migration, even after thrombin treatment. Our results indicated that thrombin in collaboration with gal-3 promoted cell migration.

The mammalian MAPK family includes P38 MAPK,ERK and JNK, MAPK signaling pathways have been proved to play an important role in modulating cell migration (28, 29). In this study, our results indicated that phosphorylation of ERK1/2 and p38 MAPK, but not JNK, significantly activated thrombin via gal-3. Paxillin is an adaptor and scaffold protein that plays a critical role in focal adhesion and cell motility (22). In our research, gal-3 siRNA partly aborted thrombin-induced paxillin phosphorylation. Gao et al. found that ERK1/2 activation further induced the paxillin phosphorylation at tyrosine 31 (23). In VSMCs, we show that not only ERK1/2 but also P38 MAPK mediated thrombin-induced phosphorylation of paxillin. Our research revealed that P38 and ERK signaling pathway are both involved in thrombin-mediated VSMC migration.

LT, RZ, and FD substantial contributions to the conception or design of the work. LT and C-KH performed the experiments. LT, C-KH, and FD are involved in interpreting the data and provide the experimental materials. LT and RZ supervised the project and wrote the manuscript. All authors contributed to the article and approved the submitted version.

This work was supported by Research Fund for the Cross between Medical and Engineering of Shanghai Jiaotong University (YG2021QN20).

Copyright © 2021 Tian, Huang, Ding and Zhang. This is an open-access article distributed under the terms of the Creative Commons Attribution License (CC BY). The use, distribution or reproduction in other forums is permitted, provided the original author(s) and the copyright owner(s) are credited and that the original publication in this journal is cited, in accordance with accepted academic practice. No use, distribution or reproduction is permitted which does not comply with these terms.