A Commentary on
Managing Recovery Resilience in Coral Reefs Against Climate-Induced Bleaching and Hurricanes: A 15 Year Case Study From Bonaire, Dutch Caribbean

In Steneck et al. (2019) Bonaire is presented as being an example of a high resilient reef with a remarkable high coral cover (Figure 10, page 8; reproduced here in Figure 1). In a recent Caribbean wide review by Jackson et al. (2014) all available coral cover data till 2012 were compiled and for Bonaire results for each research group are also shown in Figure 1 (Figure 6.2 page 185 in the Jackson et al., 2014 report). It is evident from this figure that cover estimates of Steneck and co-workers are quite high compared to the other research groups and again in Steneck et al. (2019) they are so high that the authors claim that Bonaire with an average coral cover of ~47% is actually doing better than the Caribbean maximum measured in the period 1970-1983. Throughout the manuscript this significant claim is at no point compared to other recent assessments of the Bonaire reef status, even though these coral cover estimates are significantly higher than data for Bonaire collected by us since the 70's (Bak and Nieuwland, 1995; Bak et al., 2005; De Bakker et al., 2016, 2017) and other researchers (e.g., Sommer et al., 2011). 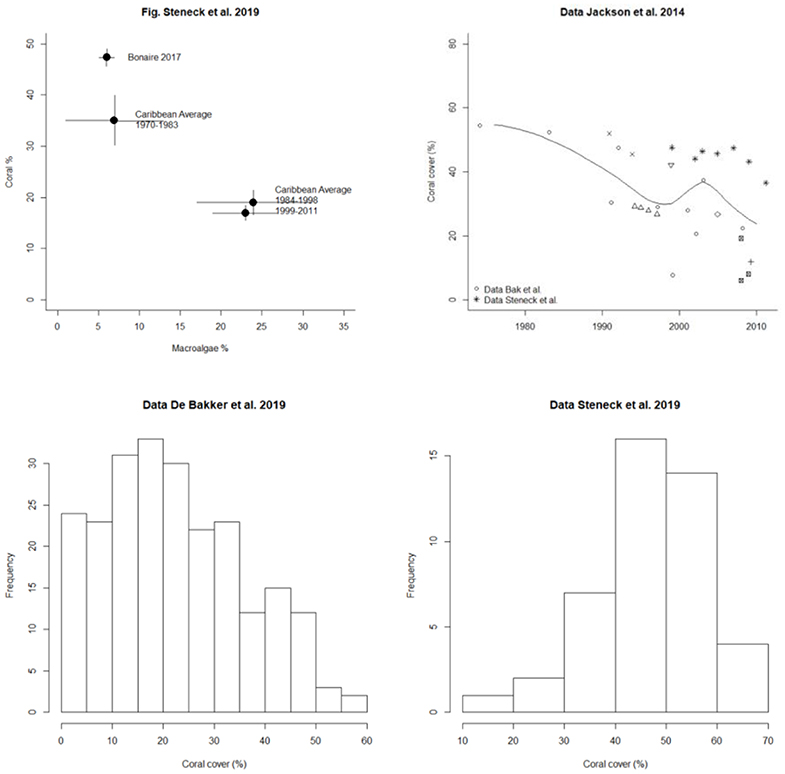 A closer look at the methods of Steneck et al. (2019) reveals two issues of concern in making comparisons between the authors' estimate of coral cover and other published estimates. First, their method of estimating coral cover differs from conventional methods. On page 4 the authors state: “However, to only compare abundances on hard substrates, measurements taken from unconsolidated rubble or sand were removed.” Also in several reports written by the same authors (see www.stinapa.org) it appears that transect data were analyzed without taking an important bottom component, namely sand and rubble, into consideration. Coral cover is expressed as a percentage of the living community (corals, gorgones, coralline algae, macro algae, turf algae). Supplement Data show that sand and rubble have not been taken into account in the permanent transects. In any transect the amount of coral or any other bottom component is ultimately dependent on the other components including non-living components such as sand or rubble. Expressing coral cover as a percentage of the living bottom cover means that these data cannot be compared anymore to most other published research because very few researcher publish on coral cover without taking into account the space that is occupied by sand and rubble. In fact, the amount of space is a fundamental aspect of benthic ecology. A simple example will make this problem clear. Suppose that between two measurements coral cover stays the same at 20%, but algae are reduced from 40 to 20% and sand and rubble increases from 40 to 60%, the method used by Steneck et al. (2019) would first of all conclude that coral cover, as a percentage of the area, is higher than it actually is and additionally result in an increase in coral cover from 33.3 to 50% while in fact it has stayed the same, namely 20%. The important point to note is that the amount of hard substrate (and its occupants) is not constant over time because the amount of sand and rubble may shift. Effectively, when collecting time series data and not taking this into account, it will prevent a correct interpretation of these data.

In 2017 we collected benthic transect data at 115 random sites along the leeward side of Bonaire separated by ~500 m (De Bakker et al., 2019; data available as supplement). On each site two transects were laid out to collect coral cover data. The transects started at a randomly chosen point at 10 m depth and 5 m from the random point (the two transect thus started with 10 m distance between each other) and were run 25 m in both directions parallel to the 10 m depth contour to count the fish (data not included in supplement). At the end of the 25 m transect, a 10 m benthic transect was measured in the opposite direction (from 25 to 15 m on the transect line). Thus, the two benthic transects were separated by a distance of 40 m and therefore reasonably uncorrelated. Furthermore, observer bias was largely prevented since the observer could not (intentionally or unintentionally) select for reef sections with higher coral cover under the transect line because they could not predict what would be present under the last 10 m of transect line.

Re-analysis of our benthic dataset of the 115 sites using the method as applied by Steneck et al. (2019)—i.e. excluding sand and rubble—found an overestimation of coral cover ranging from 0% (no sand or rubble in the transect) to 46% (92% sand present under the transect line). The majority of the Bonaire reef stretch at 10 m depth is, however, characterized by a marginal cover of sand (on average 0.5% cover according to our estimates), but in 10% of all transects the overestimation of coral cover is more than 5%. In conclusion, the effect of this first source of potential bias will generally be small and may not have affected estimates of average coral cover too drastically. As such, we presumed that there must be another explanation for the discrepancy in coral cover between the findings of Steneck et al. (2019) and other sources (see Jackson et al., 2014).

This led us to the second potential source of bias as indicated by the two histograms of the two data sets (Figure 1). Contrary to the sites sampled by Steneck and co-workers many of our sites have a coral cover of less than 10 percent and none are above 60%. The sites sampled by Steneck and colleagues appear to be a non-random selection of sites and as such should not have been presented as an average for Bonaire. One of the sites selected for the study of Steneck and colleagues is located within a reserve where entrance by humans is prohibited and which was specifically marked as marine reserve due to its high coral cover. In addition, two of their sites are located in no-fishing reserves. This biased site selection significantly raises the estimate for coral cover of the leeward reef of Bonaire to 47%, whilst our estimates based on 115 randomly chosen sites results in an average cover of 20% (Supplemental Data). This estimate is over 50% lower and likely more accurate and considerably more consistent with the data of Jackson et al. (2014). 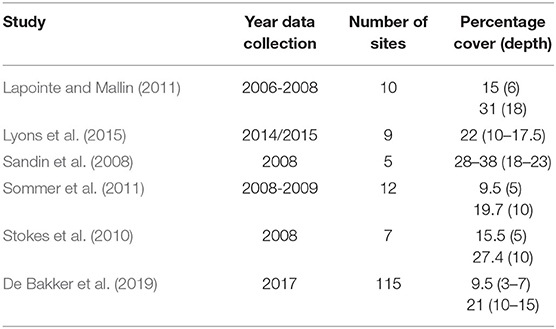 Table 1. Coral cover estimates for the leeward reef of Bonaire by other researchers.

As already noted by McClenachan et al. (2017) during the long-term degradation of coral reefs researchers have remained focused at “representative” reef sites, thus missing the fact that large parts of the reef have changed tremendously. This led to the generation of non-representative data series (Knowlton and Jackson, 2008). The reef area that this research is focused on has always been the part where coral cover was highest. When Steneck et al. started with their time series, most of the degradation of the coral reefs of Bonaire (and many other Western Atlantic reefs) had already happened as a consequence of White Band Disease, the Diadema antillarum die off, overfishing and eutrophication (Jackson et al., 2014). Especially the shallow reef area between 3 and 8 m suffered devastating losses by the White Band Diseases, losing almost all Acropora cervicornis fields (Van Duyl, 1985).

A comparison of Bonaire to the rest of the Caribbean as presented in Figure 10 in Steneck et al. (2019) is thus most likely misleading. This figure suggests that the reef is back at a condition that would not need any extra management or policy measures to improve its condition while other recent research clearly points in the opposite direction (Jackson et al., 2014; De Bakker et al., 2016, 2017). In the face of current climate trends and extremes, continued actions and investments in reef protection measures are necessary, also for Bonaire.

RB and EM contributed the data collection. EM performed the analysis. EM, RB, and FD contributed equally to the text of the manuscript.

We like to thank two reviewers and the editor for their constructive remarks.

The Supplementary Material for this article can be found online at: https://www.frontiersin.org/articles/10.3389/fmars.2020.00346/full#supplementary-material

Van Duyl, F. C. (1985). Atlas of the living reefs of Curaçao and Bonaire (Netherlands Antilles). Studies of the flora and fauna of Surinam and the Netherlands. Antilles 117, 1–37.

Copyright © 2020 Meesters, Bak and van Duyl. This is an open-access article distributed under the terms of the Creative Commons Attribution License (CC BY). The use, distribution or reproduction in other forums is permitted, provided the original author(s) and the copyright owner(s) are credited and that the original publication in this journal is cited, in accordance with accepted academic practice. No use, distribution or reproduction is permitted which does not comply with these terms.