Firstly, the spatial resolution of remote sensing images has increased incrementally since Earth Observation images were first collected in the late 1960s. Greater detail and smaller features are now visible in coral reef environments. Notably, the widespread use of drone platforms for collecting images at low altitudes above coral reefs has made individual corals visible.

Secondly, more images than ever before are being collected. The “big data revolution” refers to the phenomenon of increased capture of earth observation images, which has delivered the information on which artificial intelligence relies to recognize environmental patterns and trends. Global repositories are now continuously updated to provide real-time satellite images, often freely downloadable, for observing coral reefs. A wealth of image-based information is now available for training and evaluating algorithms to interpret coral reefs from above.

Thirdly, computational advances have made low-cost machines with fast arithmetic units widely available, notably through virtual processing facilities. This has opened up the scope for numerical approaches to image analysis, including several families of machine learning approaches.

Collectively, these three advances are fundamentally shifting the way that the remote sensing community are interpreting images, with important implications for coral reef managers. Taking a fundamentally different approach to most commercial image interpretation softwares, machine learning algorithms work with data and desired results to generate a model that turns one into the other (Domingos, 2015). By continually adjusting the mathematical and logical models built through exposure to training datasets, machine learning algorithms recognize patterns and trends in a manner akin to learning. Here, we outline two distinct applications of machine learning algorithms to coral reef environments, before considering their future uses for coral reef managers:

Rather than classifying and mapping spatially continuous areas of the ground, discrete features visible within images can be directly detected as recurring patterns across multiple pixels. This is commonly achieved through a family of multi-layered deep learning algorithms known as convolutional neural networks (CNN) that were initially developed for facial and handwriting recognition. They define a series of mathematical convolutions to generate the output from the input, allowing all instances of a feature falling within an image to be located based on a predefined set of features (LeCun et al., 2015).

On sand cay islands and reef flats, features that are amenable to detection include fallen trees, particularly on narrow beaches, which signify erosion of sand cay shorelines (Lowe et al., 2019) and individual mangrove trees, from which forest expansion and contraction can be monitored over time (Hamylton et al., 2019). Excitingly, individual corals are now clearly visible in drone images acquired above reefs (Figure 1C) and machine learning algorithms hold good potential for detecting them, opening up a wealth of potential management applications for monitoring coral restoration and bleaching. For example, on degraded reefs, restoration activities include planting tens of thousands of juvenile corals (Lirman and Schopmeyer, 2016). For rehabilitating comparable terrestrial vegetation, CNN algorithms have detected and tracked the fate of individual plants to reveal spatial trends in planting success, and to identify areas for re-planting (Hamylton et al., 2020). Similar applications are feasible for coral reef restoration. 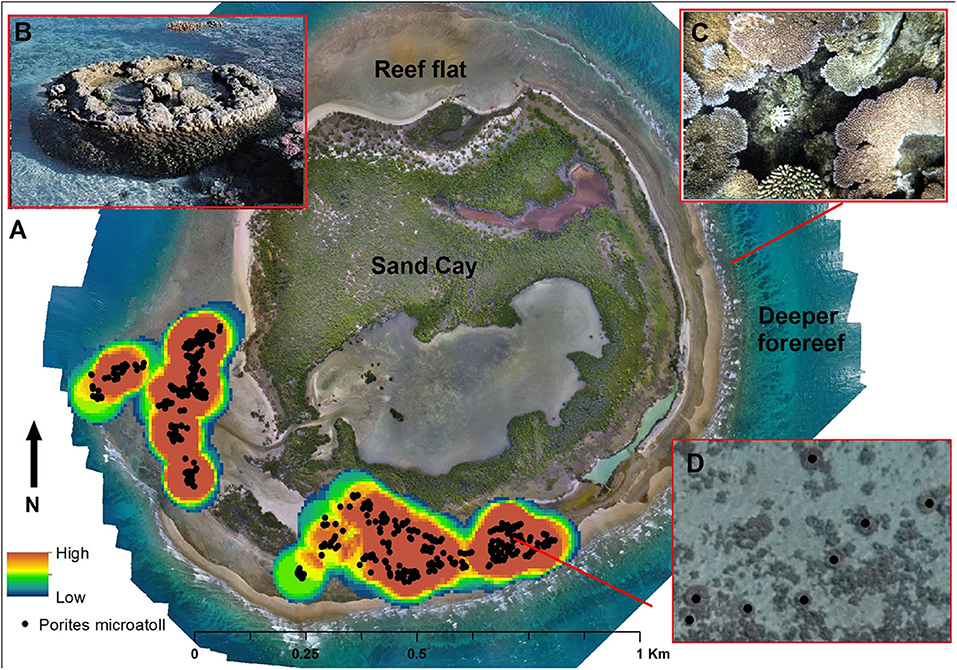 Here, we illustrate the application of a bespoke deep convolutional neural network feature extraction algorithm (Faster R-CNN) (Ren et al., 2016) to detect 507 Porites microatolls from 1400 UAV images of Nymph Island (GBR, Figure 1). Porites are distinctive corals, typically between 1 and 5 m in diameter. The algorithm was trained on a rule set that specific individual corals were circular, had a dark external margin and were found in moated intertidal reef flat areas, as specified by a “regions of interest” domain map. The detector had a tendency to overfit (i.e., it detected corals where they did not exist), which is a common feature detection problem in busy images. On the heterogeneous reef flat, this was addressed through: (i) adjustments to the non-maximum suppression parameter (NMS) that defines the threshold of confidence for detecting microatolls, (ii) use of Feature Pyramid Networks to specify the expected size of the microatolls, and (iii) use of Online Hard Example Mining to train the detection algorithm in areas of the reef flat where it was difficult to detect microatolls, thereby removing false positive detections. These three steps resulted in a faster R-CNN algorithm that could reliably detect microatolls on the neighboring reef flat at Three Isles (Recall, 94%, Average Precision 72%).

As illustrated by this example, the primary challenge for extracting features from coral reef images lies in reliably identifying individual corals against a heterogeneous background of shallow reef flat that is typically colonized by a mosaic of marine organisms. The detection of “false positives” can largely be overcome with the three aforementioned amendments in the initial algorithm development and training phase. Advantages of feature detection approaches are that they can incorporate spectral or color information, as well as spatial context and local or global texture features. Significantly, in contrast to the use of machine learning in habitat classification, they self-generate features from raw image data rather than relying on hand-crafted features from experts. Once adequately trained, this capacity to self-generate can yield features across many aerial photographs taken over comparable environments (for example, the algorithm can be trained on one reef, then applied to similar reef flats selected from the remaining 2,904 reefs of the Great Barrier Reef).

Where to From Here?

There is exciting potential for the coral reef management community to harness the powerful products provided by machine learning, although to do so may require changes to existing operational norms. The results of machine learning often take the form of a probabilistic output, which is subsequently degraded to a categorical map class (e.g., a sampling distribution of the individual tree classes, corresponding to a probability of class membership for each mapped object). Transitioning toward management applications that employ probabilistic spatial data can help to address the mismatch between the machine learning output and the discrete thematic maps that managers typically work with (e.g., a coral reef probability map, as opposed to “reef” vs. “non-reef” map; Li et al., 2020). Further, collecting spatially continuous blocks of field information rather than point records would better support the needs of deep learning applications in mapping habitat, rather than discrete features.

Learning algorithms are increasingly providing other useful services in coral reef environments, including in the analysis of benthic composition from in-situ field photos, with automated extraction of metrics like coral cover for reporting on reef condition (see https://reefcloud.ai/). The increased application of machine learning to aerial images is driving an important and exciting shift in how reef managers make use of spatial information. It is a shift that gives us the confidence, for example, to ask whether algorithms can help managers to control infestations of crown-of-thorns starfish by detecting the starfish themselves, rather than mapping their habitat as a surrogate for their presence.

Increasingly, machine learning algorithms are being run outside the automated toolbox of commercial image processing softwares and programmed for bespoke applications. Guided by users rather than computer programmers, logical rule sets can profitably incorporate biological, ecological and geomorphological principles into both habitat mapping and feature detection. Under such conditions, their application in coral reef environments can be creatively and productively expanded by turning around the title question to ask “what can the artificial intelligence community learn from coral reef managers?” The answers hold exciting prospects in the years ahead.

SH carried out the fieldwork, including image collection, processing and training machine learning algorithms, and co-authored the paper. ZZ annotated the dataset, implemented the CNN algorithms, and conducted the experiments. LW carried out the image analysis, algorithm framework design and performance evaluation, and co-authored the paper. All authors contributed to the article and approved the submitted version.

This work was funded by the GeoQuest Research Institute and the Global Challenges Program, University of Wollongong and the Regional Sciences Program, Australian Academy of Sciences.

Domingos, P. (2015). The Master Algorithm: How the Quest for the Ultimate Learning Machine Will Remake Our World. Penguin: Basic Books.

Copyright © 2020 Hamylton, Zhou and Wang. This is an open-access article distributed under the terms of the Creative Commons Attribution License (CC BY). The use, distribution or reproduction in other forums is permitted, provided the original author(s) and the copyright owner(s) are credited and that the original publication in this journal is cited, in accordance with accepted academic practice. No use, distribution or reproduction is permitted which does not comply with these terms.