The essential implications of gender in human behavioral endocrinology studies

Carney et al. (2010) recently published a study in which they examined the effect of assuming “high- and low-power” body postures on changes in testosterone levels in men and women. To do so, they randomly assigned participants to two groups (high-power and low-power), and then placed them in two successive 1-min poses appropriate for their group. They reported that “high-power” poses produced testosterone increases in participants and “low-power” poses produced testosterone decrements, while collapsing over gender in their analyses. This study tested an important hypothesis regarding the effects of dominance posturing on endocrine changes that may be critical precursors to dominance competition, in which dominance posturing could lead to pre-competition changes in testosterone that influence the impending dominance competition (Mazur, 1985; Salvador et al., 2003; Gleason et al., 2009; Edwards and Kurlander, 2010). While Carney et al. (2010) asked an important research question, there are a number of methodological and analytical factors regarding gender and testosterone that must be considered in greater detail before their data can be fully understood and used to motivate future research.

Before commenting on specific aspects of the work of Carney et al. (2010), it is informative and relevant to consider gender differences in testosterone responses to dominance situations (e.g., sports, laboratory competitions) found in past studies. Generally, across many studies, men’s testosterone levels change in response to dominance competitions by rising after a dominance victory and falling after a defeat (reviewed in Mazur and Booth, 1998; Archer, 2006; e.g., Stanton et al., 2009). Although, recent studies have also suggested that individual differences and context are relevant in accurately predicting men’s testosterone responses (e.g., Schultheiss et al., 2005; Carre, 2009) and others have shown null results of competition (e.g., Carre et al., 2009). In contrast, women do not have differential testosterone responses to winning or losing a dominance contest (Mazur and Booth, 1998; Archer, 2006; Stanton and Schultheiss, 2007), but a single recent study has challenged this conclusion (Oliveira et al., 2009).

Carney et al. (2010) collapsed over gender in all testosterone analyses. Testosterone conforms to a bimodal distribution when including both genders (see Figure 13; Sapienza et al., 2009). Raw testosterone cannot be considered a normally distributed dependent or independent variable when including both genders. Thus, Carney et al. (2010) violated a basic assumption of the statistical analyses that they reported, because they used raw testosterone from pre- and post-power posing as independent and dependent variables, respectively, with all subjects (male and female) included. 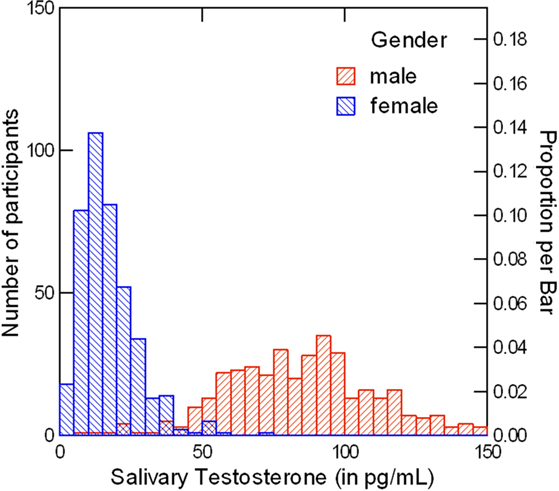 Figure 1. Shown is a depiction of the bimodal distribution of raw, baseline salivary testosterone values (in pg/mL) when including both men (N = 360) and women (N = 407). All saliva samples were collected and assayed by the present author using radioimmunoassay (Schultheiss and Stanton, 2009). The displayed testosterone data were aggregated from several past studies by the author, and for graphical purposes only, exclude eight male participants with testosterone levels between 150 and 230 pg/mL.

In their statistical analyses, the Carney et al. (2010) reported “participant sex was included as a covariate in all analyses.” But, they did not report whether or not participant sex accounted for a significant portion of the variance in any analyses, which leaves open the possibility that the effects are driven principally by one sex, or that the sexes might have exhibited divergent patterns of testosterone response. Ideally for such analyses, it would be best to report the effect size and p-value for the main effect of gender as well as a potential gender × power pose condition interaction. While the authors use residual change in their statistical tests of testosterone change (which is a valid, well-chosen technique) and include gender as a covariate, again, the bimodal distribution of raw testosterone is a statistical issue, since raw post-competition testosterone is their dependent variable and raw pre-competition testosterone is their covariate, both collapsing over gender. Additionally, Carney et al. (2010) had a small sample size for a human behavioral endocrinology study (N = 42) that was predominantly composed of women (N = 26), which makes the reported effects of power posing on testosterone change even more surprising given the common lack of testosterone changes in women as a function of dominance situations that was noted above.

In conclusion, Carney et al. (2010) used a novel manipulation to ask an important question, but the degree to which their findings can be fully understood and implemented into future research is questionable without more complete analyses.

Copyright: © 2011 Stanton. This is an open-access article subject to an exclusive license agreement between the authors and Frontiers Media SA, which permits unrestricted use, distribution, and reproduction in any medium, provided the original authors and source are credited.