Cognitive impairments are considered to largely affect functional outcome in patients with schizophrenia, other psychotic illnesses, or mood disorders. Specifically, there is much attention to the role of psychotropic compounds acting on serotonin (5-HT) receptors in ameliorating cognitive deficits of schizophrenia. It is noteworthy that atypical antipsychotic drugs (AAPDs), e.g., clozapine, melperone, risperidone, olanzapine, quetiapine, aripiprazole, perospirone, blonanserin, and lurasidone, have variable affinities for these receptors. Among the 5-HT receptor subtypes, the 5-HT1A receptor is attracting particular interests as a potential target for enhancing cognition, based on preclinical and clinical evidence. The neural network underlying the ability of 5-HT1A agonists to treat cognitive impairments of schizophrenia likely includes dopamine, glutamate, and gamma-aminobutyric acid neurons. A novel strategy for cognitive enhancement in psychosis may be benefited by focusing on energy metabolism in the brain. In this context, lactate plays a major role, and has been shown to protect neurons against oxidative and other stressors. In particular, our data indicate chronic treatment with tandospirone, a partial 5-HT1A agonist, recover stress-induced lactate production in the prefrontal cortex of a rat model of schizophrenia. Recent advances of electrophysiological measures, e.g., event-related potentials, and their imaging have provided insights into facilitative effects on cognition of some AAPDs acting directly or indirectly on 5-HT1A receptors. These findings are expected to promote the development of novel therapeutics for the improvement of functional outcome in people with schizophrenia.

This paper provides a hypothesis regarding the neural basis for the ability of AAPDs to improve cognition. This theoretical issue is important from the perspective of the development of therapeutics for enhancing long-term outcome in patients with schizophrenia.

Do AAPDs Enhance Cognition in Schizophrenia?

Typical antipsychotic drugs, such as perphenazine, have been reported to show some cognitive benefits in schizophrenia with a small effect size, as reported in the CATIE trial (Keefe et al., 2007). Importantly, Woodward et al. (2005) report an advantage of AAPDs over TAPDs in terms of enhancing cognition with a moderate effect size both in controlled and uncontrolled trials. However, there have been challenges to the pro-cognitive efficacy of AAPDs. For example, improvement of verbal memory by treatment with risperidone or olanzapine has been suggested to be no better than that of practice effect (or more precisely, test-retest effect) in normal controls (Goldberg et al., 2007). However, it may be premature to conclude that way, since no data were presented in that study (Goldberg et al., 2007) as to whether schizophrenia patients not receiving these AAPDs would have elicited the same degree of improvement as that in treated patients (Sumiyoshi, 2013).

One of the suggestions for this debate comes from the ability of lurasidone to dose-dependently improve cognitive functions, as measured by a computer-based test battery (Maruff et al., 2009), in a placebo-controlled double-blind study (Harvey et al., 2013; Sumiyoshi, 2013). This result provides a support for the ability of some AAPDs to enhance cognition in patients with schizophrenia, which is independent of a practice effect.

Another issue is what percentage of patients can be treated with a clinically meaningful degree. It is reported that a larger than 0.5 SD improvement in cognition substantially improves quality of life for patients (Norman et al., 2003). Accordingly, treatment with clozapine produced a significantly larger proportion of patients showing a larger than 0.5 SD improvement in letter fluency that predicts work outcome (Sumiyoshi and Meltzer, in preparation). Again, these findings provide a support for the proposition that AAPDs are superior over TAPDs for enhancing cognition.

In spite of these lines of evidence, cognitive benefits of AAPDs have been questioned, as noted above. One of the main reasons may be that the neural mechanisms for it have not been fully elucidated. Therefore, the following sections address this issue from the perspective of electrophysiological imaging, neural network, and energy metabolism.

Figure 1 illustrates a rationale for electrophysiological approach toward cognitive assessment. The combination of neuropsychological and electrophysiological methods, e.g., event-related potentials (ERPs), may be beneficial for the understanding of mechanisms of cognitive enhancement, rational choice of psychotropic drugs, and prediction of functional outcome. 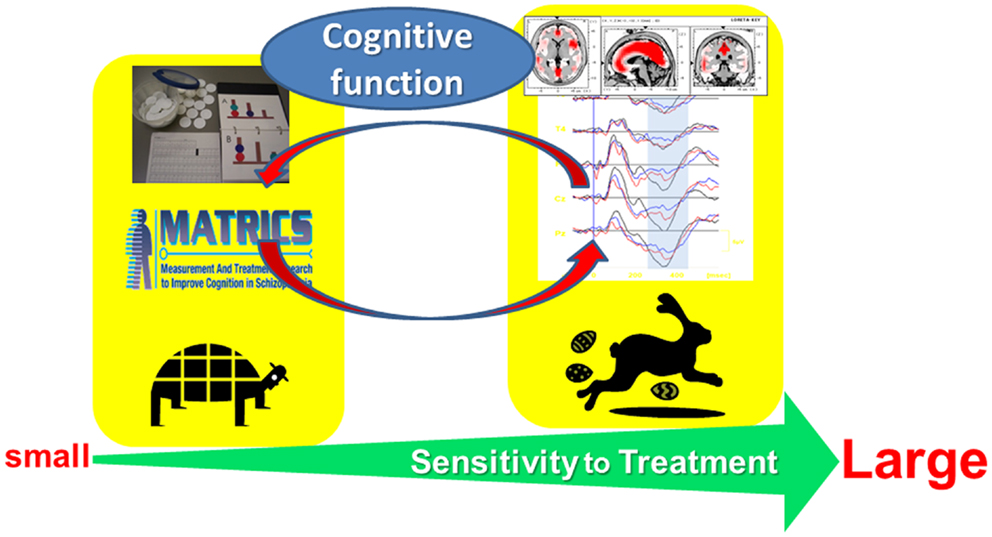 Figure 1. Electrophysiological approach toward cognitive assessment in schizophrenia. This strategy is expected to facilitate (1) elucidation of mechanisms of cognitive enhancement, (2) rational choice of psychotropic drugs, and (3) prediction of functional outcome.

Specifically, we reported the effect of olanzapine on cognition and QOL, as well as P300, a component of ERPs, in patients with schizophrenia (Higuchi et al., 2008). P300 has been used as a marker of attentive cognitive processes. Figure 2 (right) demonstrates P300 waveforms. At baseline, P300 amplitudes of patients were diminished compared to those of control subjects. After 6 month treatment with olanzapine, P300 amplitudes were increased, as were scores of verbal memory and quality of life (Figure 2, left). 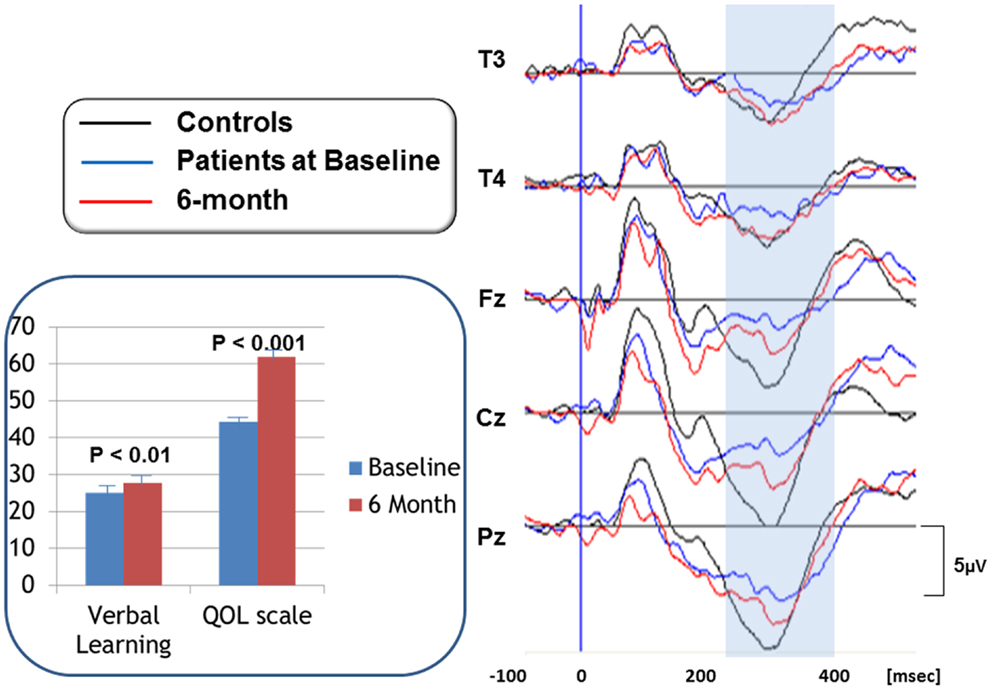 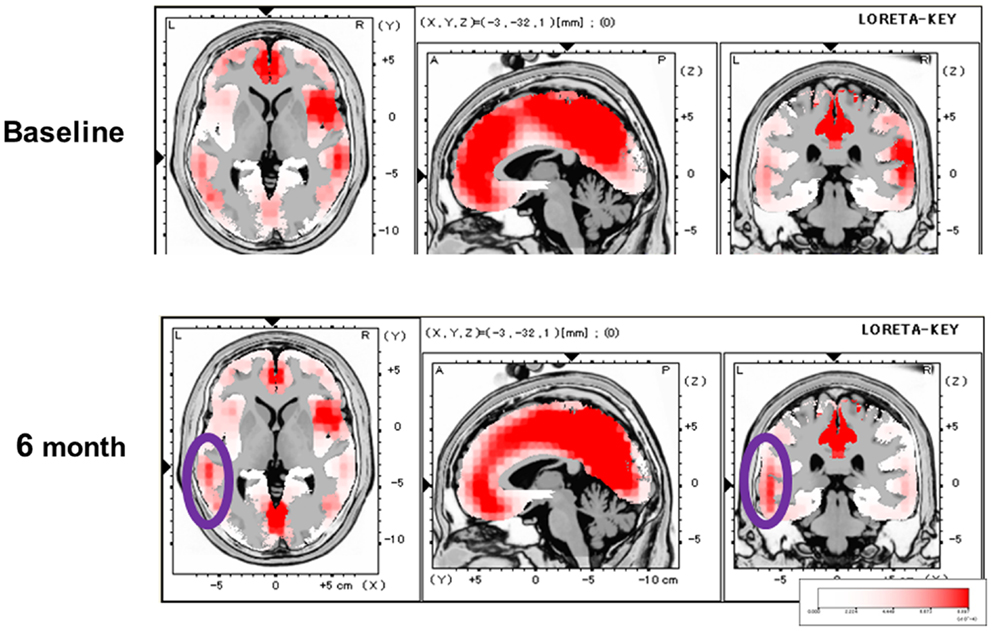 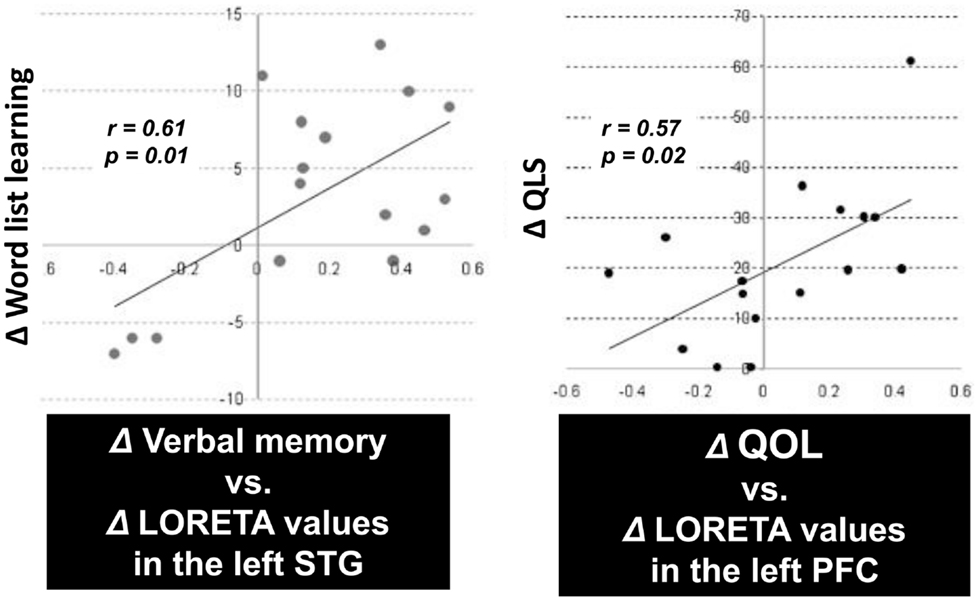 Figure 5. Enhancement of P300 current density by perospirone in schizophrenia. Left, grand average of ERP waveforms before (black lines) and after (red lines) treatment with perospirone in patients with schizophrenia. Right, 6 months treatment with perospirone enhanced P300 current density, evaluated by the sLORETA method, in the left superior frontal gyrus. Perospirone also improved social cognition, the degree of which was correlated with P300 activity in the frontal brain regions (see text).

These observations are consistent with our previous report that 5-HT1A receptor density is increased in the left PFC from subjects with schizophrenia (Sumiyoshi et al., 1996). The up-regulation of 5-HT1A receptors is hypothesized to reflect a compensatory reaction to diminished neurotransmission through these receptors (Sumiyoshi et al., 1996). The electrophysiological findings, mentioned here, may be consistent with this hypothesis, and explain distinct cognition-enhancing profiles of some AAPDs with high affinity for 5-HT1A receptors, e.g., ziprasidone, perospirone, aripiprazole, and lurasidone (Sumiyoshi, 2012, 2013, in press; Sumiyoshi and Higuchi, 2013). This concept may explain why perospirone, but not olanzapine enhanced P300 current density in the PFC. 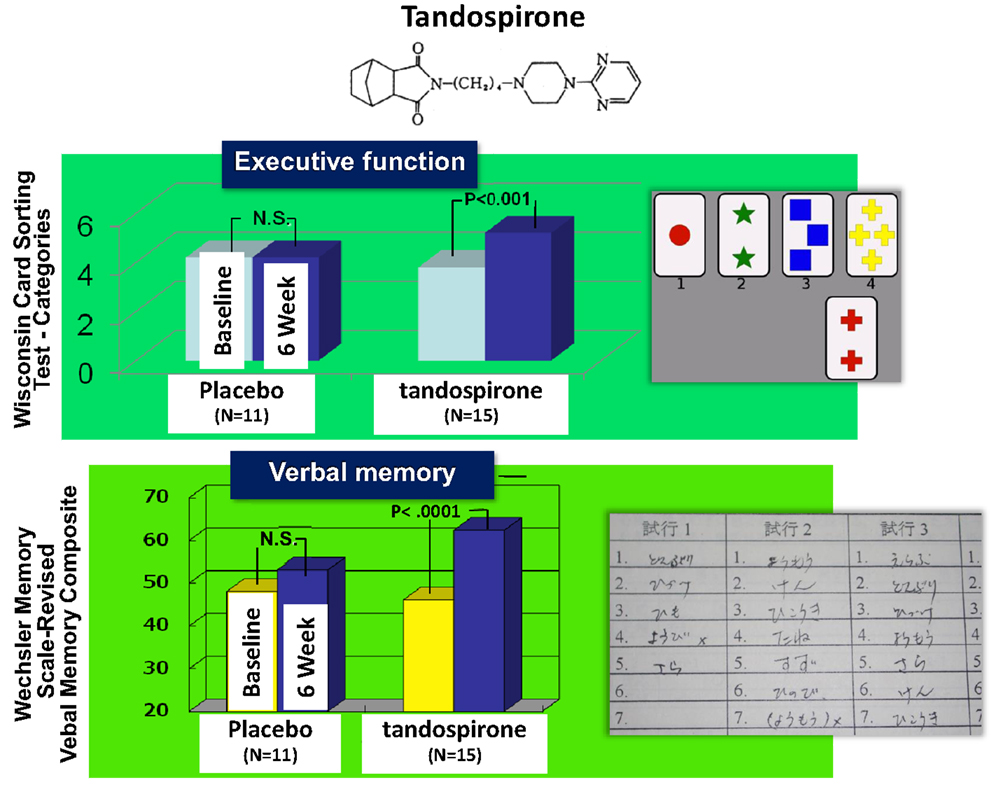 Figure 7 illustrates a neural network providing a possible basis for the ability of tandospirone and AAPDs acting on 5-HT1A receptors to enhance cognition. Systemic administration of 5-HT1A agonists has been shown to selectively stimulate 5-HT1A receptors located on gamma-aminobutyric acid (GABA) interneurons in the PFC (Llado-Pelfort et al., 2011; Sumiyoshi and Higuchi, 2013). This diminishes the activity of GABA neurons, leading to disinhibition of Glu neurons. This may explain the ability of AAPDs to augment DA release in the PFC (Sumiyoshi and Higuchi, 2013), a putative mechanism for the ability of AAPDs to enhance cognition, in a 5-HT1A receptor-dependent manner (Diaz-Mataix et al., 2005; Bortolozzi et al., 2010). These neural events may explain the ability of augmentation therapy with tandospirone to restore mismatch negativity amplitudes (Higuchi et al., 2010), an electrophysiological measure of glutamatergic activity that is diminished in schizophrenia (Javitt et al., 2008). Other possible mechanisms may involve GABAB receptor-mediated transmissions (Gronier, 2008) or other neurotransmitters (e.g., acetylcholine). 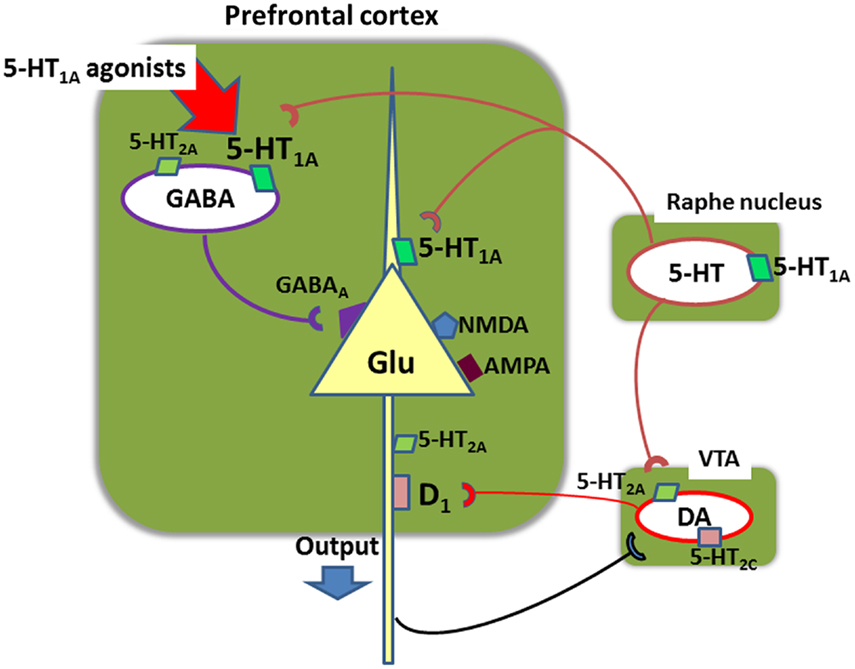 Traditionally, energy supply into the brain has been considered to depend on glucose. However, recent research suggests lactate plays a significant role in energy production both in the aerobic and anaerobic conditions, irrespective of the presence of glucose (Wyss et al., 2011; Uehara and Sumiyoshi, 2013).

The lactate-dependent energy metabolism has been associated with glutamatergic activity (Uehara et al., 2008). Specifically, glutamatergic transmissions enhance lactate production, which is mediated by N-methyl-d-aspartate (NMDA) receptors and glutamate transporters, as well as astrocytes (Uehara et al., 2008; Uehara and Sumiyoshi, 2013). Recently, lactate has been shown to exert neuroprotective effects (Wyss et al., 2011). These lines of evidence prompted us to use lactate metabolism as a biological basis for the effect of pro-cognitive drugs.

Measurement of lactate in the extracellular space can provide real-time information on its production (Uehara et al., 2008). Lactate metabolism was hypothesized to reflect energy supply in the brain areas crucial for cognitive functions, e.g., PFC. Figure 8 describes the effect of tandospirone on extracellular lactate concentrations in a rat model of schizophrenia (Uehara et al., 2012). At the neonatal stage (postnatal days 7–10), rats were transiently administered MK-801, an antagonist at the NMDA receptor. In this experiment, these model rats showed suppression of the stress-induced increment of lactate levels in the PFC, suggesting impaired energy metabolism. This suppression in the model rats was inhibited by chronic treatment with tandospirone (once daily for 14 days before the measurement of lactate levels) (Uehara et al., 2012). These results are consistent with clinical observations that 5-HT1A agonists, such as tandospirone and buspirone, ameliorate cognitive impairment related to PFC function (Sumiyoshi et al., 2001a,b, 2007). 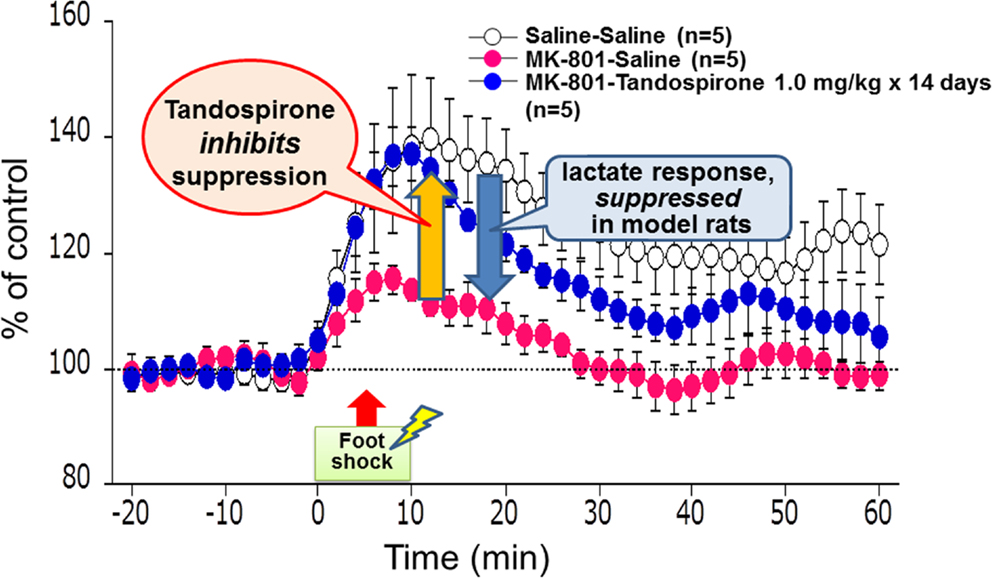 Figure 8. Effect of tandospirone on lactate production in the prefrontal cortex of a rat model of schizophrenia, as measured by in vivo microdialysis. At the neonatal stage, rats were transiently injected with MK-801, an antagonist at the N-methyl-d-aspartate receptor, on postnatal days 7–10. These model animals showed suppression of the stress-induced increment of lactate levels, as represented by extracellular concentrations, in the adult stage. This suppression in model rats was inhibited by chronic treatment with tandospirone (once daily for 14 days before the measurement of lactate levels).

A main topic of this article has been the role for 5-HT1A receptors in cognitive improvement. On the other hand, other 5-HT receptor subtypes have been suggested to be a potential candidate for cognitive enhancers. These include 5-HT3 (e.g., mirtazapine, ondansetron), 5-HT6 (Ro04-06790, Lu AE58054), and 5-HT7 (SB25874, amisulpride, lurasidone) receptors [reviewed in Sumiyoshi and Higuchi (2013)].

In conclusion, AAPDs have been shown to enhance cognition in a clinically meaningful manner. The mechanisms for it may include several modes of action and neural networks, which requires further explorations.

This study was funded by grants-in-aid for Scientific Research from Japan Society for the Promotion of Science, Health, and Labour Sciences Research Grants for Comprehensive Research on Disability, Health, and Welfare (H23-Seishin-Ippan-002; H24-Seishin-Ippan-002), and SENSHIN Medical Research Foundation to Tomiki Sumiyoshi, as well as Takeda Science Foundation, grant from the Smoking Research Foundation, and Excellent Young Researchers Overseas Visit Program to Takashi Uehara. The authors thank Drs. Yasuhiro Kawasaki and Koichi Kurata for fruitful discussions, and Dr. Tomonori Seo and Ms. Hiroko Itoh for their dedicated support.

Gronier, B. (2008). Involvement of glutamate neurotransmission and N-methyl-d-aspartate receptor in the activation of midbrain dopamine neurons by 5-HT1A receptors agonists: an electrophysiological study in the rat. Neuroscience 156, 995–1004. doi:10.1016/j.neuroscience.2008.08.033

Sumiyoshi, C., and Sumiyoshi, T. (in press). Functional outcome in patients with schizophrenia: the concept and the measurement. Act Nerv. Super.

Uehara, T., and Sumiyoshi, T. (2013). “Lactate metabolism as a new target for the therapeutics of schizophrenia,” in Frontiers in Clinical Drug Research-CNS and Neurological Disorders, ed. A. U. Rahman (Sharjah: Bentham Science Publishers).

Copyright: © 2013 Sumiyoshi, Higuchi and Uehara. This is an open-access article distributed under the terms of the Creative Commons Attribution License (CC BY). The use, distribution or reproduction in other forums is permitted, provided the original author(s) or licensor are credited and that the original publication in this journal is cited, in accordance with accepted academic practice. No use, distribution or reproduction is permitted which does not comply with these terms.

Cognitive deficits in schizophrenia and other neuropsychiatric disorders: Convergence of preclinical and clinical evidence