Misophonia is a newly defined psychiatric condition, which is characterized by the hatred of ordinary human sounds (Hadjipavlou et al., 2008; Schwartz et al., 2011; Edelstein et al., 2013; Ferreira and Harrison, 2013; Neal and Cavanna, 2013; Schröder et al., 2013). The central hallmark of misophonia is an aggressive impulse automatically triggered by sounds, such as breathing, chewing, and eating. To date, there has been no neurophysiological marker linked with this disorder. Such a marker could potentially benefit the recognition of misophonia patients and give directions to further neurophysiological research in this domain.

The underlying causes of misophonia are unknown. Patients usually report normal hearing and standard hearing tests do not reveal any audiological deficits (Edelstein et al., 2013; Schröder et al., 2013). Therefore, our aim was to explore if the pathophysiology of this disorder manifested itself in some dysfunction of the auditory processing system. This was carried out by examining differences in specific components of the auditory event-related potentials (ERPs) between misophonia patients and controls, elicited by pure tones in an oddball paradigm.

The P1 is associated with pre-attentive orienting toward new sounds and is not yet affected by attention (Picton and Hillyard, 1974; Pratt et al., 2008). Sensory gating (the suppression of responding to irrelevant stimuli) can be assessed by examining P1 suppression during repetitive presentation of an auditory-stimulus (Luck and Kappenman, 2012). Its amplitude is found to be altered in various disorders such as autism, Alzheimer’s disease, and attention-deficit/hyperactivity disorder (Buchwald et al., 1989, 1992; Kemner et al., 1996).

The N1 peak is linked to early attention (Näätänen, 1992; Rinne et al., 2006). It has been suggested to signal the detection of abrupt changes in sensory input, which enables us to focus on events that are potentially informative (Friston, 2005; Winkler, 2007; Todd et al., 2012). The N1 is commonly assessed in an “oddball” paradigm (Näätänen and Picton, 1987). In such paradigm, participants are presented repetitive sounds (“standard”) with randomly occurring rare deviant sounds (“oddballs”), often while watching a silent movie. Attenuated N1 responses have been found in various studies of schizophrenia, a disorder in which notable audiological symptoms, i.e., acoustic hallucinations and delusions, are present. In these studies, N1 peaks were reduced in chronic schizophrenics, first-hospitalized patients, and twins of schizophrenics (Salisbury et al., 2010). N1 findings in PTSD are inconsistent with some studies reporting increased N1 amplitude and others decreased amplitude. Peak latency increments were also found but not in all studies (Javanbakht et al., 2011). Interestingly, in antisocial personality disorder, an impaired N1 was related to increased impulsivity (Lijffijt et al., 2012). Decreased N1 function was also found in cocaine abuse and bipolar disorder (Boutros et al., 2006; Lijffijt et al., 2009).

The P2 peak is an endogenous evoked component and appears to be involved in early allocation of attention and initial conscious awareness (Näätänen, 1992). Less research has been focused on the P2 peak. Reduced P2 has been found in chronic and in first-hospitalized schizophrenic patients (O’Donnell et al., 1994; Salisbury et al., 2010). In PTSD studies, the results are ambiguous with both increased and decreased P2 amplitudes being reported (Javanbakht et al., 2011).

In our present study, we investigated early processing of auditory information using a non-attending oddball paradigm. We focused our analysis on any differences in the P1, N1, and P2 components of the evoked potentials between patients diagnosed with misophonia, and matched healthy controls. While the exogenously generated P1 component could provide information about sensory gating, a P2 difference would point more toward attention-related malfunctioning. Because the N1 is considered the most stable ERP component, this could be a reliable marker of pathology. We believe that any difference between the auditory evoked responses of misophonia patients and controls could reflect an anomaly in the way that these patients filter novel information in the auditory environment.

Fourteen healthy controls (males = 11, females = 3), matched for demographical characteristics, were recruited on the absence of any misophonic symptoms or psychiatric comorbidity and tested. The age ranged between 23 and 55 years (M = 32.4 years, SD = 9.0 years).

The characteristics of both groups are provided in Table 1. All participants gave written informed consent and received financial compensation for their travel expenses, but no further compensation was offered for participating in the study. The study was carried out in accordance with the Declaration of Helsinki and was approved by the local medical ethics committee of the Academic Medical Center of Amsterdam. 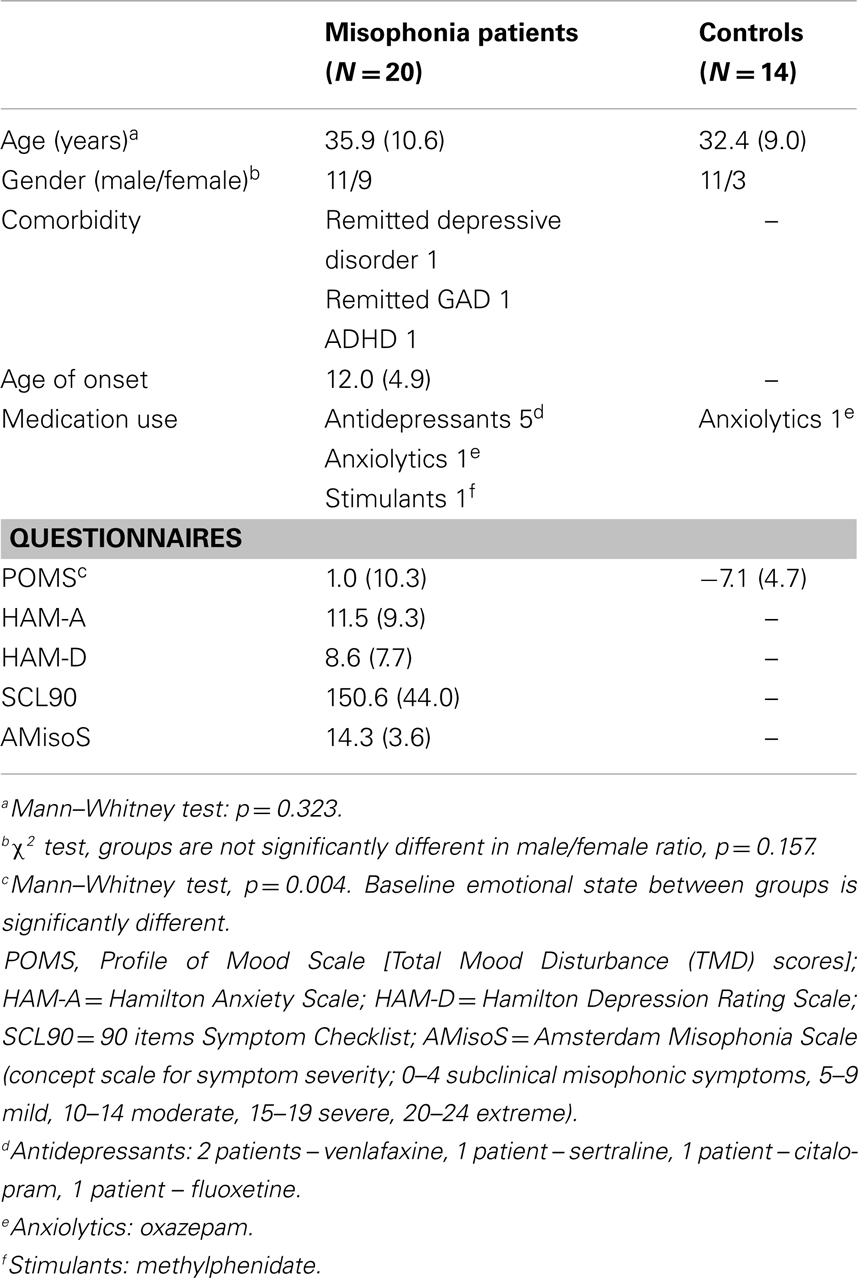 Table 1. Clinical and demographic characteristics of the study sample.

The participants were presented with a pseudorandomized sequence of 840 tone stimuli (Presentation 11.3, Neurobehavioral Systems Inc., Albany, CA, USA) administered through Philips SHS3201/28 headphones. The standard tones (80%) had a frequency of 1000 Hz. A deviant tone that was lower than the standard tone (250 Hz) and a tone that was higher than the standard (4000 Hz) were added to the sequence. Both deviants were presented in 10% of trials and were never presented successively.

The auditory stimuli had a duration of 200 ms (including 10 ms rise and fall times shaped by a Blackman window), while the inter-stimulus interval was 650 ms. During the presentation of the tones, the participants watched a neutral silent movie with subtitles. They were instructed to ignore the tones.

EEG data were acquired using a WaveGuard 10–5 cap system developed by ANT, with 64-Ag/AgCl electrodes, spanning from frontal, temporal, central, and occipital scalp sites. The EEG was sampled at 512 Hz with an online average reference and then subsequently imported into MATLAB for all further off-line analyses. The electrooculogram (EOG) was recorded between supra- and infra-orbital sites around the left eye for vertical movement (blinks), and outer acanthi of the left and right eyes for possible side-eye movements.

The auditory-stimulus locked ERP data were low-pass filtered at 30 Hz using a two-pass Butterworth IIR filter (default option Fieldtrip) and averaged with the sweep beginning 200 ms before the stimuli and lasting until 450 ms after stimulus onset. The ERPs were baseline corrected using the mean time 150 ms prior to stimulus onset.

The average peak amplitude and peak latency of the P1, N1, and P2 were computed per subject and compared between the misophonia patient group and healthy controls. The time interval for determining the mean peak amplitude and latency were chosen based on looking at the grand-averaged data.

For the standard tones, evoked responses were different in timing and therefore different time-windows were used for the N1 (120–160 ms) and P2 (160–220 ms). Channel selection was based on maximal amplitude of the grand average.

The mean amplitudes for the P1, N1, and P2/3 were obtained by averaging values of abovementioned channels within the predefined intervals.

An independent t-test was performed to test for a difference in responses elicited by the standard tones. Two-way repeated-measures analysis of variance (rANOVA) was used to test for a difference in response after presentation of deviant tones, with tone (low deviant, high deviant) as within-subject variable and group (control, patient) as between-subject variable. Statistics were performed using SPSS, attaining a threshold of p ≤ 0.05. For clarity reasons, only significant effects will be reported in the Section “Results.” Results of insignificant effects are presented in Table 3.

Figures 1 and 2 show the grand-average ERP evoked by standard (Figure 1) and deviant tones (Figure 2) in the same electrodes used for the statistical analyses. The shaded areas represent time intervals of interest. 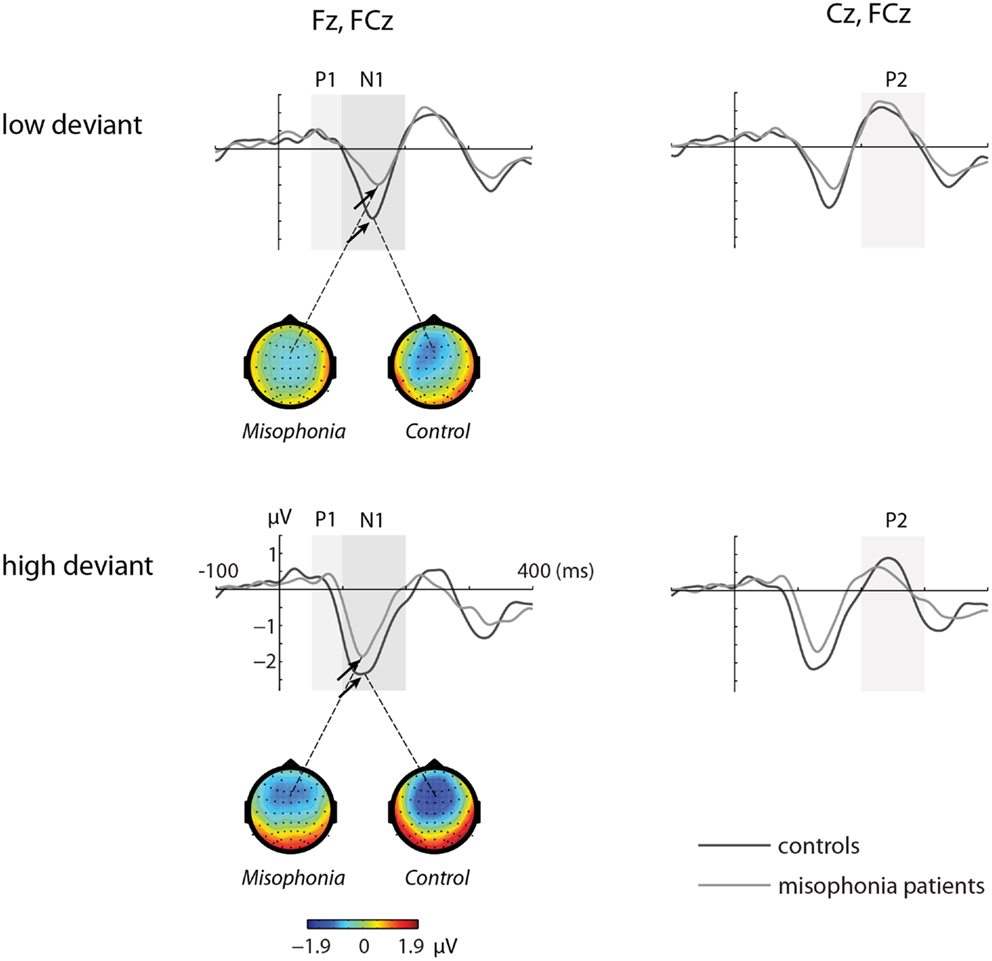 The deviant tones evoked a smaller N1 component in the misophonia patients than in the control group [−0.711 vs. −1.277 μV, F(1,32) = 5.608, p = 0.024]. However, the peak latency of the deviant evoked N1 was not different between the misophonia and the healthy control group. We found no differences in the P1, P2 average amplitude or peak latencies between patients and controls (see Tables 2 and 3). Also no interactions between group and deviant tones were found. 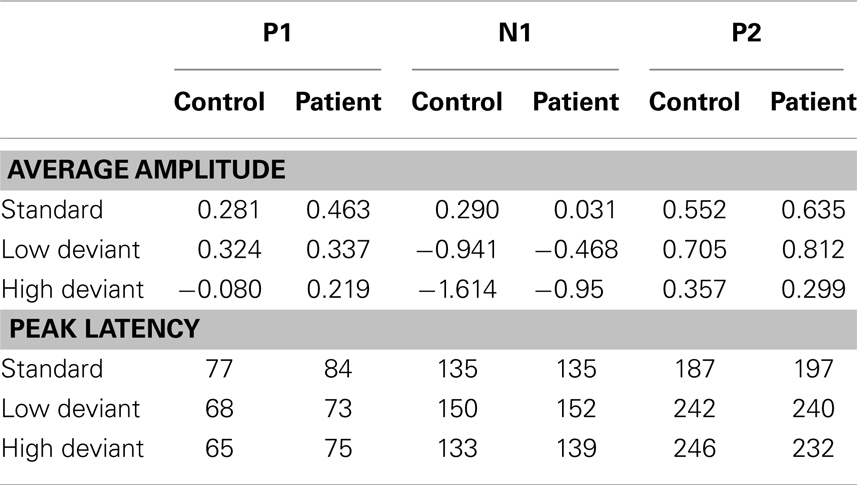 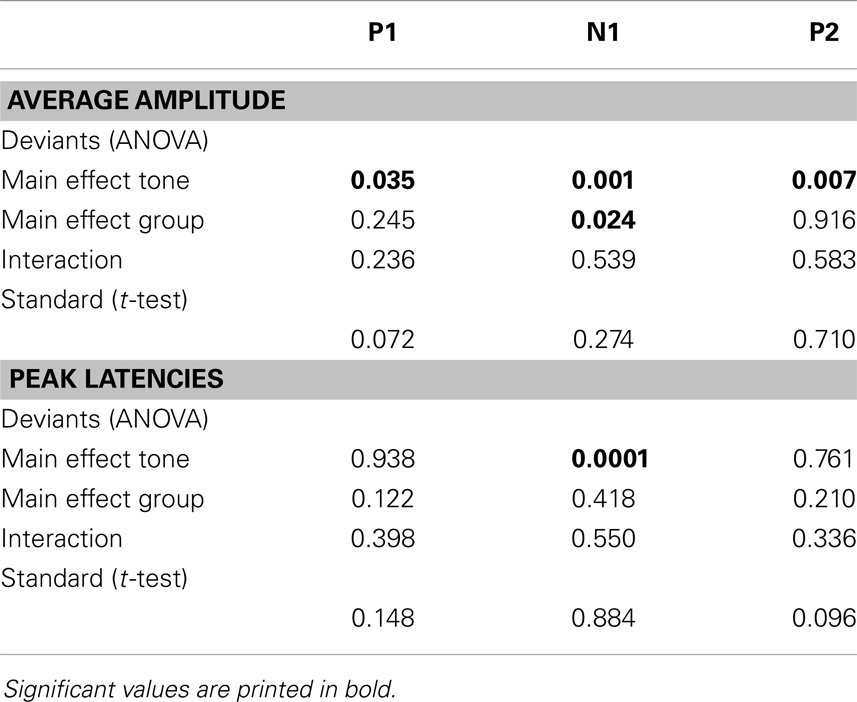 Table 3. p-Values for rANOVA and t-tests on average amplitude and peak latencies.

We found no differences in the average amplitude and peak latency of the P1, N1, or P2 responses elicited by the standard stimuli between the misophonia and control group.

Another explanation could be that difference in N1 peak amplitude between the misophonia group and the control group is due to some other psychiatric comorbidity or the use of psychotropic medication. However, we believe that it is very unlikely that these differences can be explained by comorbidity because in the misophonia group only one patient had a current psychiatric comorbidity, which was attention-deficit hyperactivity disorder (ADHD). Nevertheless, the confounding effect of psychotropics, especially antidepressants, on N1 responses in misophonia patients cannot completely be ruled out. However, previous research investigating medication effects on the N1 indicate that this is unlikely (Salisbury et al., 2010).

We concede that our current findings cannot easily be linked to two fundamental issues underlying misophonia symptomology: first, why do human sounds – and not inanimate, i.e., environmental sounds – evoke misophonic symptoms? And second, why do these sounds trigger aggression (Schröder et al., 2013)?

We conjecture that the first issue could be related to the existence of two separate neural systems for processing human and non-human sounds (Pizzamiglio et al., 2005; Engel et al., 2009). Possibly, in misophonia it is only the human sound-processing network that is affected. This, however, does not fully explain the arousal described by a few misophonia patients caused by inanimate – environmental – sounds (Edelstein et al., 2013), or why we observed a lower N1.

The second question might be understood through literature on obsessive–compulsive personality disorder (OCPD). OCPD has a very high comorbidity rate in patients with misophonia of 52.4% (Schröder et al., 2013). Core symptoms of OCPD include cognitive inflexibility and high levels of moralism, which can result in criticism of other people’s behavior (American Psychiatric Association, 2000). Violation of social norms – both intentional and unintentional – have been associated with left orbitofrontal cortex (OFC) activation (Berthoz et al., 2002). Therefore, OFC involvement in the emergence of misophonia symptoms could exist. This could then also partly explain the differences, described by some misophonia patients, between their aggressive reactions to sounds made by, e.g., babies or elderly demented, which usually do not trigger much aggression, and to those of other adults, which do. The difference might lie in the level that the misophonia patients assess the accountability and deliberateness of the sound source.

This is the first study investigating the underlying neurobiological mechanisms of misophonia. We found that it was possible to distinguish misophonia patients from healthy controls by using a simple auditory oddball paradigm. We conclude that a lower than normal N1 response could be a neurophysiological marker for misophonia. However, it still remains to be investigated if this diminished N1 is a characteristic of general psychiatric psychopathology or a distinctive characteristic for misophonia. Moreover, it is unclear whether the underlying deficit in misophonia is due to altered auditory perception, an inadequate processing of auditory stimuli, or a higher order dysfunction of cortical control related to impulsivity. Thus, we believe further research should therefore aim at delineating misophonia from other psychiatric disorders and elucidate the neural interactions directly correlating with the symptomology of misophonia.

Ali Mazaheri is supported from a Veni grant from the Netherlands Organization for Scientific Research (NWO).

Copyright: © 2014 Schröder, van Diepen, Mazaheri, Petropoulos-Petalas, Soto de Amesti, Vulink and Denys. This is an open-access article distributed under the terms of the Creative Commons Attribution License (CC BY). The use, distribution or reproduction in other forums is permitted, provided the original author(s) or licensor are credited and that the original publication in this journal is cited, in accordance with accepted academic practice. No use, distribution or reproduction is permitted which does not comply with these terms.

†Arjan Schröder and Rosanne van Diepen have contributed equally to this work.