Ample studies have shown that when a specific sensory stimulus occurs together with a fearful event, long-term fear memory to the stimulus is formed (LeDoux, 2000). The formation of fear memory to a specific stimulus is useful for the subject in order to avoid subsequent encounter with it and to adjust the behavior. In this study we were interested to explore whether fear learning might affect the formation and extinction of different memories. Alteration of different memory formation and extinction after fear learning may serve to adjust memory performance and behavior in the changing fearful environment.

Memory extinction is one mechanism whereby the behavioral response is kept proportional to the situation. Extinction of memory occurs when the conditioned stimulus (CS) cues are presented alone without the unconditioned stimulus (US; Pavlov, 1927). It does not reflect forgetting of the original learning (e.g., the fearful event), but rather relearning of a new association of the CS with the absence of the original reinforcement (Rescorla, 1996). An optimal rate of extinction is required for the normal function and survival of the organism. Facilitated memory extinction may lead to an incorrect attribution of the stimulus and may lead to dangerous situations that may result in death or injury. Impairment of extinction is associated with behavioral dysfunction and with brain disorders such as in post-traumatic stress disorder (Milad et al., 2008, 2009; Norrholm et al., 2011; Milad and Quirk, 2012).

Toward exploring the possibility that fear memory may affect the formation and extinction of different memory we study the effects of cued fear conditioning on the formation and extinction of conditioned taste aversion (CTA) memory. In cued fear conditioning an animal forms fear memory to a neutral stimulus (in the current study tone- CS) paired with a fearful event (footshock- US) (Fanselow and LeDoux, 1999; LeDoux, 2000; Davis and Whalen, 2001; Maren, 2001, 2005; Schafe et al., 2001; Sah et al., 2003; Rodrigues et al., 2004; Johansen et al., 2011). In CTA an organism learns to avoid a taste (CS) if the first encounter with that taste is followed by malaise (US) (Garcia et al., 1955; Bures et al., 1998; Rosenblum, 2008).

Male Sprague Dawley rats (250–300 g), were used in the study (Harlan Laboratories). Rats were housed separately at 22 ± 2°C in a 12 h light/dark cycle. Water and food were available ad libitum unless otherwise indicated. Behavioral experiments were approved by the University of Haifa Institutional Committee for animal experiments in accordance with National Institutes of Health guidelines.

Fear conditioning took place in a Plexiglas rodent conditioning chamber with a metal grid floor. Rats were habituated to the training chamber (context A) for 3 days. Animals were presented with five pairings of a tone for 40 s as the CS (5 kHz, 80 dB) that was co-terminated with a foot shock as the US (0.5 s, 1.3 mA). The intertrial interval (ITI) was random with average of 180 s. Unpaired training took place in the same conditioning chamber. Rats received non-overlapping five presentations of the CS and US where the US preceded the CS by 60 s and at least 120 s was required between a tone CS and the next trial. The naïve group was introduced to the training cage with no CS or US. Rat groups were tested 24 h after training for long-term memory in a different chamber with different context and Formica floor (context B), to diminish the effect of context. Animals were presented with two tones (40 s, 5 kHz, 80 dB) with average ITI of 180 s. Behavior was recorded and the video images were transferred to a computer equipped with an analysis program. The percentage of changed pixels between two adjacent 0.5 s images was used as a measure of activity. The experimental data shown in Figures 1, 3 includes only rats whose freezing was above 50% following cued fear conditioning and below 35% after unpaired training in the second test tone. 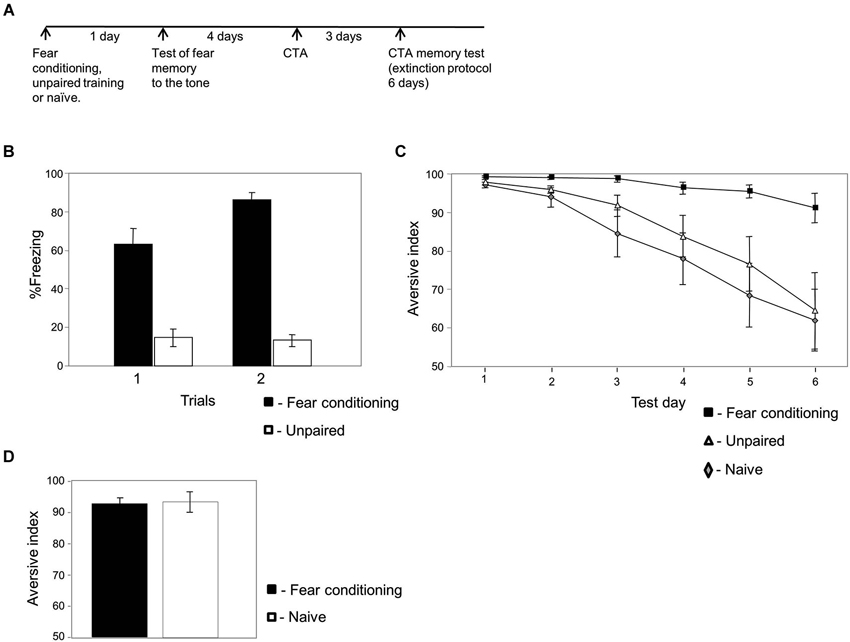 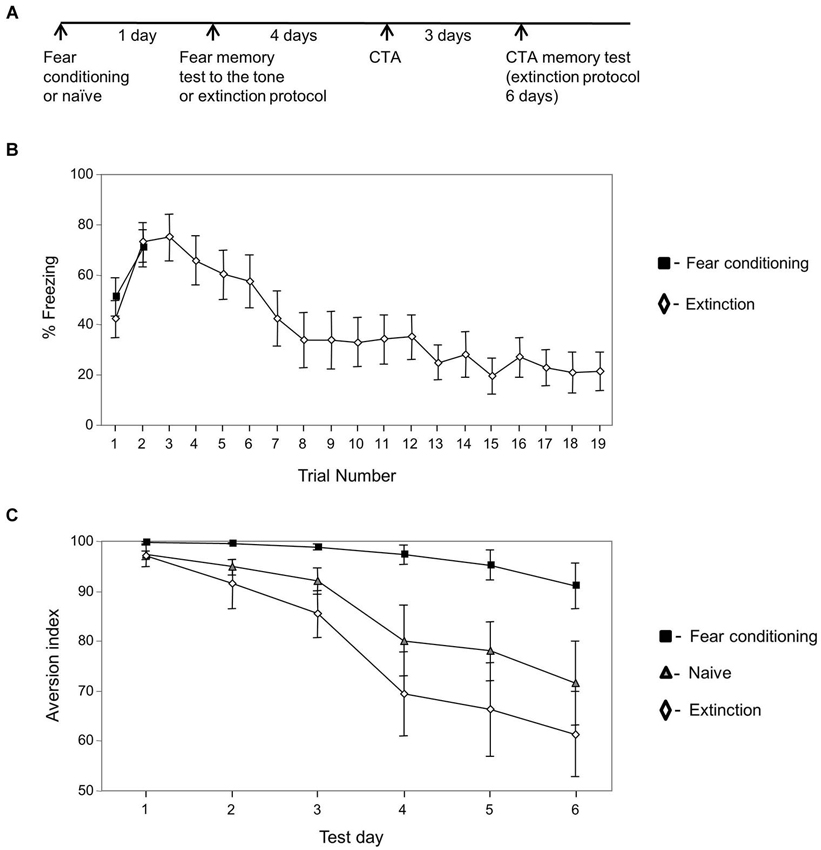 Fear conditioning was performed as above. The next day animals were subjected to presentations of 19 CSs (Figure 2) or 15 CSs (Figure 4) (40 s, 5 kHz, 80 dB, ITI 180) in a different chamber with different context and Formica floor (context B), to diminish the effect of context. 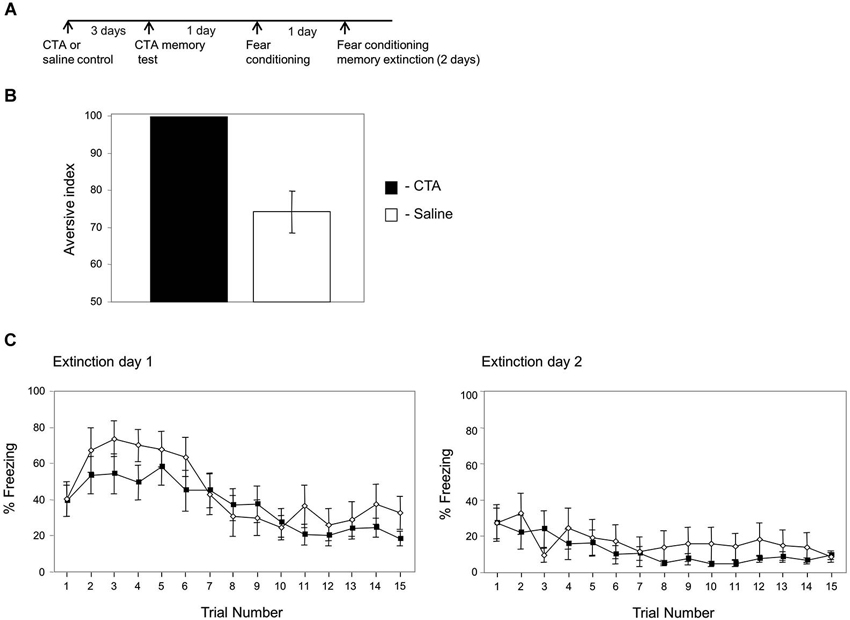 Rats were trained over 3 days to get their daily water ration within 20 min/day from two pipettes, each containing 10 ml. On day 4 (conditioning day), the rats were presented with saccharin (0.1% w/v, sodium salt; CS) instead of water. Sixty minutes later, they were injected with LiCl (3 ml 0.07 M LiCl; US) intraperitoneally. For CTA memory retrieval (Figure 1D) animals were injected with lower concentration of LiCl (3 ml 0.015 M LiCl). On days 5–6, the rats were presented daily for 20 min with two pipettes containing 10 ml of water each. Conditioned taste aversion memory test was performed on six successive days (days 7–12) where the rats were presented daily with an array of four pipettes, two containing 10 ml of saccharin and two containing 10 ml water for 20 min. Their liquid consumption was recorded and aversion index was calculated. The aversion index was defined as [milliliters of water/(milliliters of water + milliliters of saccharin)] × 100 consumed in the test; that is, 50 is chance level, and the higher the aversive index the strongest memory is where rats remember the CS as an aversive stimulus.

Repeated-measures analysis using the generalized estimating equations (GEE) approach was performed (Zeger and Liang, 1986). Generalized estimating equations was used instead of ANOVA since, in some cases, the assumptions of equality of covariance matrix and of multivariate normality of residuals of our data were not met. The GEE approach is especially robust to misspecification of variance/covariance structure. Furthermore, GEE assumes that the correlations among measures across time are not of direct interest, and focuses on the comparison of groups across time. Single comparison between two groups was done using Mann-Whitney U test. Statistical analysis was done using the SPSS 20 software.

We were interested to explore the possibility that fearful experience leading to long-term fear memory could affect the extinction of a different memory. Toward that end we trained rats for fear conditioning and studied its effects on subsequent CTA memory extinction (Figure 1A). Animals were trained for fear conditioning to associate a tone (CS) with a footshock (US). Control animals received the same sensory stimulation but in an unpaired non-associative manner or were naïve and not subjected to the CS and US. The paired protocol (fear conditioning) consistently leads to auditory fear conditioning memory formation, whereas the unpaired protocol does not. Long-term conditioned fear memory was assessed by measuring freezing responses elicited by the CS without the US 24 h after conditioning. Figure 1B shows that the paired rats froze significantly more than the unpaired controls (χ2(1) = 87.779; p < 0.003). Four days later animals were trained for CTA and were tested 3 days afterwards for long-term taste memory for six consecutive days (Figure 1C). Results that compared the effect of group (fear conditioning, unpaired and naïve groups) and time (CTA test days) were analyzed. The analysis revealed a significant main effect for group (χ2(2) = 10.162; p < 0.007). There is interaction between groups and time variables (χ2(2) = 12.712; p < 0.003). Analysis between groups revealed that there is an interaction between the fear conditioning and naïve groups (χ2(1) = 7.583, p < 0.007), between the fear conditioning and unpaired groups (χ2(1) = 6.295, p < 0.02) but not between the unpaired and naïve groups (χ2(1) = 0.013, p > 0.9) showing that CTA memory in the previously fear conditioning trained animals extinguished significantly slower than in control groups. In addition, the results show that this phenomenon is not affected by acute stress induced by the unpaired training.

Fear Conditioning has no Effect on CTA Memory Retrieval

Extinguished Fear Memory has no Effect on CTA Memory Extinction

CTA Memory has no Effect on Fear Conditioning Memory Extinction

In this study we show that a specific fearful experience leads to alteration of extinction of a different memory. Such an adjustment in the rate of extinction may be useful for better behavioral response and evaluation of information in possibly dangerous environment. Slower extinction rate provides the organism with an additional time to examine and evaluate the novel information to ensure its safety.

Gil Joels designed, interpreted and executed all experiments; Raphael Lamprecht designed and interpreted all the experiment and wrote the manuscript.

Pavlov, I. P. (1927). Conditioned Reflexes: An Investigation of the Physiological Activity of the Cerebral Cortex. London: Oxford University Press.

Copyright © 2014 Joels and Lamprecht. This is an open-access article distributed under the terms of the Creative Commons Attribution License (CC BY). The use, distribution or reproduction in other forums is permitted, provided the original author(s) or licensor are credited and that the original publication in this journal is cited, in accordance with accepted academic practice. No use, distribution or reproduction is permitted which does not comply with these terms.