Forgetting can be considered an adaptive strategy in preventing traumatic or outdated information from interfering with current cognitive processing (Bjork, 1989). However, self-referential details are often hard to forget in real life (i.e., the autobiographical experience of my ex-girlfriend). Some researchers have focused on the neurocognitive mechanism of memory encoding processing, demonstrating that self-referential items are harder to forget than other-referential item (Yang et al., 2013). However, the neurocognitive mechanism of memory retrieval processing which elicits this phenomenon is not clear.

Directed forgetting (DF) effects are demonstrated by poorer recall and recognition of TBF items (“to-be-forgotten”) than TBR items (“to-be-remembered”; Van Hooff et al., 2009). To explore intentional forgetting, a typical paradigm of “DF” is used in the experiment (MacLeod, 1998). This procedure provides two explicit cues to index TBR items and TBF items during the study phase. These two cues can be presented either after each item (item-method) or following the entire list of items (list-method). For the item methods, these effects are generally accounted for both selective rehearsal hypothesis and retrieval inhibition hypothesis. The selective rehearsal hypothesis suggests that DF stems entirely from the diminished elaboration or rehearsal of TBF rather than TBR words (Woodward et al., 1973; Basden and Gargano, 1993), and the retrieval inhibition hypothesis is that DF suppresses the retrieval of these items (Levy and Anderson, 2008; Mecklinger et al., 2009).

In order to explore the retrieval mechanism, source memory tasks and event-related potential (ERP) measurements were used in the current study. Based upon memory distinction between central items of an event (i.e., item memory) and contextual details of the event (i.e., source memory), source memory tasks were sensitive to examine the recollection of specific contextual details (Sahakyan and Delaney, 2005; Racsmány and Conway, 2006; Racsmány et al., 2008). For scalp electrophysiological recording, three important ERP components were involved in recognition retrieval of source memory: the FN400 (a positive shift or reduction in negativity in frontal regions at 300–500 ms) that indexed familiarity, the late positive complex (LPC; a positive component over posterior regions at 500–800 ms) that indexed recollection, and the late right frontal effect (an amplitude maximum over right frontal scalp at 800–1200 ms) that indexed post-retrieval monitoring (Curran, 2000; Diana et al., 2007; Rugg and Curran, 2007). The right frontal effect indicated the episodic reorganization and source monitoring of the retrieval (Hayama et al., 2008; Cruse and Wilding, 2009).

Nineteen college students from Capital Normal University (Beijing, China) with normal or corrected-to-normal vision participated in this study. These subjects were right-handed, native Chinese speakers with no history of psychiatric or neurological disorders, head injury, or psychotropic drug use. Three participants were excluded (their artifact-free ERP trials were less than 18 in at least one condition, due to excessive eye movements or EEG artifacts), leaving a final sample of 16 participants (mean age, 22.2 years; 8 men). Each subject signed an informed consent form before experiment and received monetary compensation after experiment. This study was carried out in accordance with the recommendations of “Human Research Ethics Committee at Capital Normal University” with written informed consent from all subjects. All subjects gave written informed consent in accordance with the Declaration of Helsinki. The protocol was approved by the “Human Research Ethics Committee at Capital Normal University”. No additional considerations of the study in cases where vulnerable populations were involved.

Two-character Chinese nouns (640 in total) were used as stimuli (mean total number of strokes: 16.51 (ranging from 5 to 35), mean word frequency: 14.79 (ranging from 2.3 to 99.7) occurrences per million (Liu et al., 1990)). Fourteen adult native Chinese speakers (an independent sample; 7 men) provided concreteness ratings of the nouns. The concreteness ratings (from 1/extremely abstract to 7/extremely concrete) confirmed that the set of nouns was concrete nouns (Mean = 6.12, ranging from 5 to 6.92). All nouns were separated into two equal sets (320 nouns for set A and 320 nouns for set B) that were alternatively used as “old” (studied) or “new” (unstudied) items at the test, which was counterbalanced across participants. The items of set A and B were randomly selected to have equivalent concreteness, number of strokes or word frequency.

Participants were seated 70 cm from a Dell monitor in an electrically shielded room wherein they performed an extrinsic source memory task (Figure 1). After a short practice block, participants undertook the experiment, which included five study-test blocks (64 old and 64 new items in total), with each study phase followed by a test phase after a 2-min gap. The studied items were presented in two separate referential categories (“self” vs. “other”). In the “self” condition, the nouns were accompanied with the personal pronoun “my” (such as “my cup”, “my table” etc.); in the “other” condition, the nouns were presented together with the personal pronoun “his” (such as “his sofa”, “his pen” etc.). Participants were instructed to consider “my-noun” pairs as the things related to themselves (indicating self-reference) and to consider “his-noun” pairs as the things related to Li Keqiang (Chinese Prime Minister; indicating other-reference).

Each block consisted of a study and a test phase. During the study phase, each trial began with a fixation cross (750 ms) that was followed by a pronoun-noun pair (“my-noun” pair or “his-noun” pair, extending a 9° × 7° visual area), which was centrally presented for 1200 ms. After pronoun-noun pair, a blank screen, which lasted for 2000 ms, was inserted. Then, an instruction “remember” (indexing TBR) or “forget” (indexing TBF) was displayed for 500 ms. At the end of each trial, another blank screen was shown for 1000 ms. All stimuli were presented in white against a black background. The order of trials was pseudo-random with each type of instruction (TBR vs. TBF) appearing in no more than three consecutive trials. Additionally, stimulus types of reference (“my–noun” and “his–noun” pairs) were presented randomly in every session. Participants were explicitly instructed to follow the instruction to remember both the noun and its source (personal pronoun) or to forget them.

Two minutes after the study phase, the participants’ source memory was tested. In each block, the test stimuli consisted of 64 old items (two-character Chinese noun presented in the study phase) and 64 new items. All 128 nouns were pseudo-randomly intermixed. In each trial, after a fixation cross for 750 ms, a noun (single word without any pronoun, extending an 8° × 7° visual area) was presented for 2000 ms. During the presentation of the noun, the participants were asked to make a response of Self (S), Other (O) or New (N), thereby indicating whether the noun belonged to the self (“my-noun” pair) or other (“his-noun” pair) category or whether the noun was never presented. Three out of the four letter keys on a standard English keyboard (i.e., “D”, “F”, “J”, “K”) were chosen as response keys for the three possible responses (i.e., S, O, N). The S/O response keys were assigned to one hand, and the N keys to the other hand. The response hand assignment was counterbalanced across participants.

Self-old items that required S responses and were assigned to correct sources were deemed to be “self-source-correct” (SSC) responses. Other-old items that required O responses and were assigned to correct sources were considered “other-source-correct” (OSC) responses. Finally, new items that required N (new) responses were considered “correct rejections” (CR). Source accuracy for the TBR instruction and TBF instruction was calculated as the ratio of the number of source correct items with the TBR and TBF instruction, respectively, over its corresponding number of hit items. Two-way repeated-measures analysis of variance (ANOVA; with Greenhouse-Geisser corrections) was performed on source accuracy, with independent variables of reference (self, other) and instruction type (“TBR”, “TBF”). Significant main and interaction effects were followed by Bonferroni-corrected post hoc pair-wise comparisons.

The continuous electroencephalography recordings were measured during test phases. According to the extended international 10–20 system, 64 scalp sites of Ag/AgCl electrodes embedded in an elastic cap. An electrooculogram (EOG) was recorded with four additional channels which were used to monitor horizontal and vertical eye movements. EEG signals were referenced to the left mastoid during recording and re-referenced offline to the average of the left and right mastoid recordings. EEG/EOG signals (impedance <5 kΩ) were digital bandpass filtered from 0.05 Hz to 40 Hz, segmented around image onset (−200 to 1600 ms) and corrected to a 200 ms pre-stimulus baseline. Trials with EEG voltages that exceeded ±75 μV were excluded from analysis. EOG blink artifacts were corrected using a linear regression estimate (Gratton et al., 1983). Experiment presentation was executed using Presentation (Neurobehavioral Systems, Inc.). Data collection was performed using Neuroscan acquisition software, and statistical analysis was performed in SPSS 20.0.

According to previous studies of DF (Bailey and Chapman, 2012; Yang et al., 2013), the ERPs were conducted for source memory, in order to explore DF modulation of the self-referential information. The retrieval of source memory was analyzed with its correct-source trials. 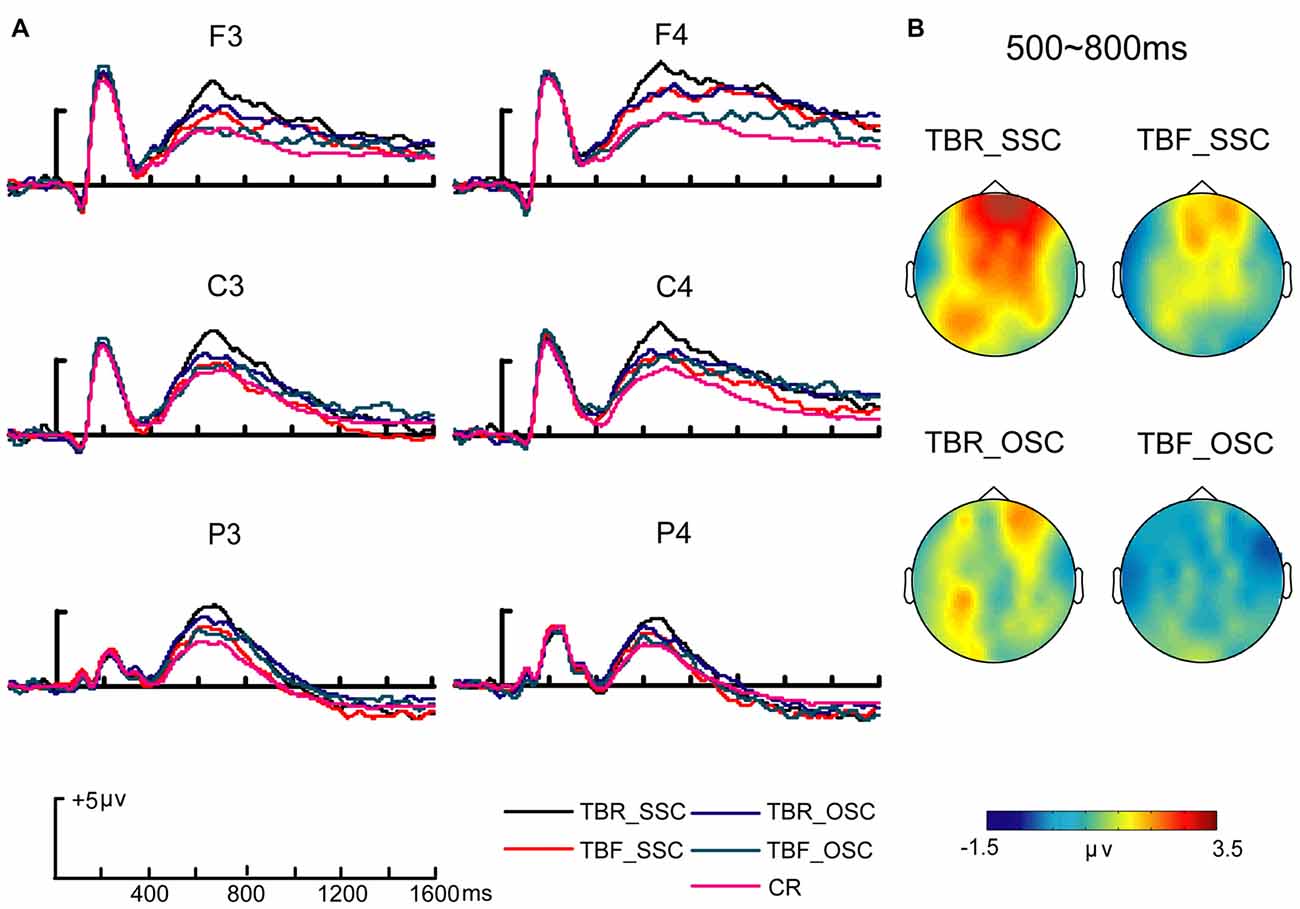 The current study poses some notable limitations. First, the sample size in the current study is small, due to the limited time and finance. To acquire more robust conclusion in future studies, large simple size of participants should be used in the next research. Second, ERP data of retrieval phase in our research was reported, but the ERP data of encoding phase was not recorded. ERP data of encoding phase should be analyzed to compare with retrieval phase so that we can obtain the association between encoding phase and retrieval phase to explain the alleviative DF caused by self-referential processing. Third, we acknowledged that Bonferroni-corrected post hoc pair-wise comparisons could not be valid enough to correct for the number of independent ANOVA analyses and our results should be verified with caution in further research. Finally, the number of stimuli per category is not large and might lead to the low signal to noise ratio. More trials of each category should be designed to obtain more precise signal of ERP data.

CG and YWu: supervised the project and designed the study. YWang revised the draft of manuscript. XM analyzed the data and wrote the main manuscript text. All authors reviewed the manuscript.

We thank Yinshan Wang and Yan Jin for helpful advice. The present study was supported by the National Natural Science Foundation of China (31671127), the Beijing Municipal Commission of Education Key Program of Science and Technology (KZ201410028034) and the Beijing Advanced Innovation Center for Imaging Technology (BAICIT-2016018).

Bjork, R. A. (1989). “Retrieval inhibition as an adaptive mechanism in human memory,” in Varieties of Memory and Consciousness: Essays in Honour of Endel Tulving, eds H. L. Roediger and F. I. M. Craik (Hillsdale, NJ: Erlbaum), 309–330.

Copyright © 2017 Mao, Wang, Wu and Guo. This is an open-access article distributed under the terms of the Creative Commons Attribution License (CC BY). The use, distribution or reproduction in other forums is permitted, provided the original author(s) or licensor are credited and that the original publication in this journal is cited, in accordance with accepted academic practice. No use, distribution or reproduction is permitted which does not comply with these terms.