Some animals are attracted by sun light, others are highly repulsed by it. Especially for slowly moving animals, such as Drosophila larvae, direct sunlight may be perceived as noxious stimulus as it increases the risk of desiccation, DNA-damaging by UV-light and exposure to predators. For several reasons, model organisms like Drosophila larvae are well-suited for investigating how light cues are translated into an appropriate behavioral output. First, many of the genetic tools, which were created for use in adult fruit flies, work also in larvae. Second, the lower number of cells in Drosophila larvae compared to adults makes this system adequate for reconstructing neural circuits. Third, the relatively simple behavioral repertoire of larvae facilitates the study of basic functions like navigation with regards to light. Larvae navigate robustly away from a light source by the use of several sophisticated behavioral strategies which are based on temporal or spatial information processing. Two central brain neurons, the NP394-neurons, are highly important for larval light avoidance. It was even reported that these cells seem to play a functional role in a putative larval light preference switch right before pupation. However, the exact function of the NP394-neurons in light navigation remains unknown. We here show that the functional role of NP394-neurons in larval light navigation is restricted to behaviors based on temporal information processing, but not for spatial navigation.

Drosophila larvae are highly photophobic and navigate robustly away from a light exposure by using sophisticated behavioral strategies either based on temporal or spatial information processing (Kane et al., 2013; Humberg and Sprecher, 2017; Humberg et al., 2018). 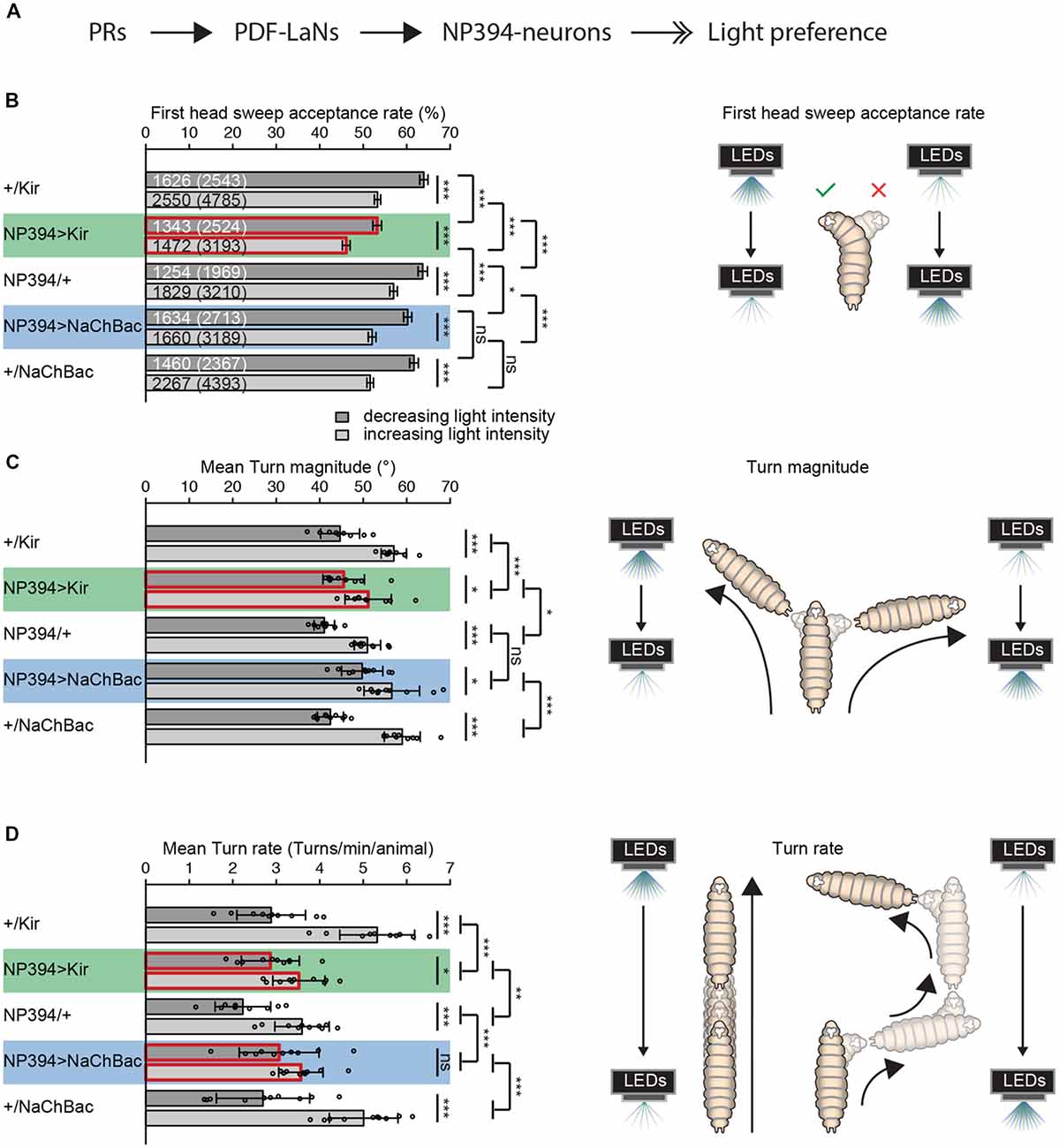 Figure 1. The functional role of NP394-neurons in navigational strategies based on temporal information processing. (A) Flow chart is illustrating the known upstream partners of NP394-neurons, namely photoreceptor neurons (PRs) and Pigment dispersing factor expressing lateral neurons (PDF-LaNs). NP394-neurons play a role in larval light preference (solid black arrows with open double-heads). (B–D) Either Kir2.1 or NaChBac were expressed in NP394-neurons to silence or hyper-activate the cellular activity of these neurons, respectively. Larvae were tested in the temporal light gradient assay (please see “Materials and Methods” section). (B) Functional NP394-neurons are not necessary for accepting more head sweeps during a decrease than increase of light intensity. Silencing neuronal activity of NP394-neurons leads to a decreased first head sweep acceptance rate in comparison with the corresponding controls for light intensity in- and decrease respectively. (C) Functional NP394-neurons are not necessary for making turns of greater size during an increase than decrease of light intensity. Animals with silenced NP394-neurons activity possess defects in biasing their turn size with respect to the corresponding controls. (D) Hyper-activation of NP394-neurons cellular activity seems to lead to a loss of the turn rate bias. Larvae with silenced NP394-neurons cellular activity show a decreased turn rate bias compared to the respective controls. (A–C) *p < 0.05, **p < 0.01, ***p < 0.001, ns, not significant. Data show mean. (B) First numbers are number of accepted first head sweeps. Numbers in brackets are total number of first head sweeps. Error bars show SEM. (C,D) Circles indicate means of individual experiments and error bars show SD. Please find information about the used statistical tests and the exact results of statistical analysis in Supplementary Table S1.

Behavioral parameters were defined and analyzed as described previously (Humberg et al., 2018). Briefly, runs are events of forward locomotion with larval head and body aligned. Turns are events of no forward locomotion with larval head and body not aligned (head sweeping). A turn consists of at least one head sweep. Rejected head sweeps are followed by another head sweep. An accepted head sweep terminates the turn and initiates a run in this new direction.

Data from the temporal light source assay were analyzed as followed: first head sweeps and turns were analyzed separately for the phases of light intensity increase and decrease, respectively.

Turn rate: all turns initiated during a certain intensity change phase (23.5 s) were counted (x turns). These numbers were converted into turns/min by dividing this number by 23.5 s and multiplying the result with 60 s ((x turns/23.5 s) * 60 s). These numbers were divided by the average larvae number on the plate during the corresponding phase. Thus, for each experiment 10 means were determined for both the phases of intensity in-and decrease, respectively. From these means of single phases of individual experiments a mean was determined for each experiment. An overall mean was determined from these means of single experiments.

Larvae with silenced NP394-neurons are still able to reject more head sweeps when they sense a light intensity increase and accept more head sweeps when they sense an intensity decrease (Figure 1B). However, the head sweep acceptance rates for both phases of light intensity in- and decrease are lower compared to the data from the respective controls (Figure 1B). Larvae in which NP394-neurons were hyper-activated possess lower first head sweep acceptance rates only compared to their driver line control (Figure 1B).

Animals with silenced NP394-neurons turn more often when they sense an increase in light intensity (Figure 1D). However, the turn rate bias is much lower compared to the one of the corresponding controls (Figure 1D). Animals in which NP394-neurons were hyper-activated do not seem to bias their turn rate (Figure 1D).

Thus, NP394-neurons seem to be involved in driving navigational strategies based on temporal light intensity information. 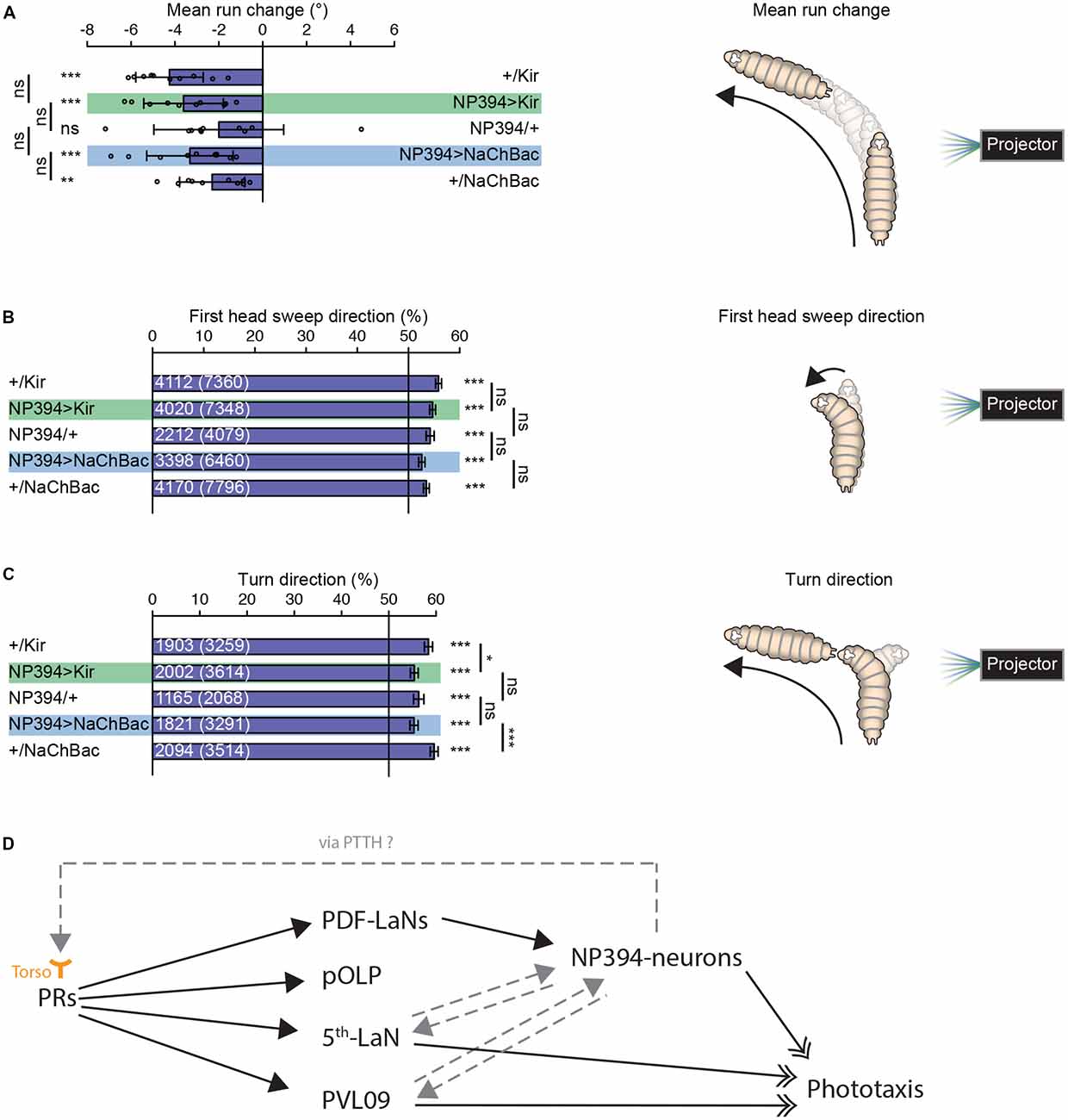 Figure 2. Navigational strategies based on spatial information processing. (A–C) Larvae were tested in the spatial light source assay (please see “Materials and Methods” section). (A) Larvae with silenced or hyper-activated NP394-neurons activity are able to steer away from a light source. Larvae with silenced or over-activated NP394-neurons activity showed not a decreased steering with in runs away from the light source compared to both of the corresponding control lines. (B) These larvae are able to bias already the first head sweep away from the light source. Moreover, the probability of the first head sweep direction of larvae lacking functional NP394-neurons is not statistically different from the respective control lines. (C) Further, these animals are able to bias their final turn direction away from the light source. Moreover, the probability of the turn direction of larvae lacking functional NP394-neurons is only statistically different from the respective effector line control. (A–C) *p < 0.05, **p < 0.01, ***p < 0.001, ns, not significant. Data show mean. (A) Circles indicate means of individual experiments and error bars show SD. (B,C) First numbers are number of first head sweeps or turns directed away from the light source, respectively. Numbers in brackets are total number of first head sweeps or turns, respectively. Error bars show SEM. Please find information about the used statistical tests and the exact results of statistical analysis in Supplementary Table S1. (D) Flow chart is illustrating the known (solid black arrows with closed head) and putative (non-solid gray arrows with closed head) upstream and downstream partners of NP394-neurons, namely PRs, PDF-LaNs, projection optic lobe pioneer cell (pOLP), postero-ventro-lateral neuron 09 (PVL09) and the 5th-LaN. NP394-neurons could feedback on PRs via prothoracicotropic hormone (PTTH) which could bind to Torso of PRs. NP394-neurons, PVL09 and the 5th-LaN play a role in phototaxis (solid black arrows with open double-heads).

Taken together, NP394-neurons seem to be dispensable for mediating navigational strategies based on spatial light intensity information.

The Functional Role of NP394-Neurons in Visually-Driven Behavior

Previous studies showed that NP394-neurons are absolutely essential for larval light avoidance by using light-dark choice tests (Gong et al., 2010; Yamanaka et al., 2013). These tests consist of homogenously illuminated and shaded areas. Thus, larvae might only sense light intensity differences when moving between the two different area types. Within these tests, larval behavioral decisions might be based on temporal intensity changes. Thus, in line with our results, NP394-neurons seem to function in mediating navigational strategies based on temporal light information processing. Further, our data suggests that the function of NP394-neurons could be restricted solely to behavioral strategies based on temporal light information integration.

Our results do not confirm a functional role of NP394-neurons in a light preference switch. Further, in our experiments larvae with hyper-activated NP394-neurons do not show increased light avoidance (Gong et al., 2010). Our data suggests that genetically silencing and hyper-activating NP394-neurons activity lead rather to similar than opposite effects on larval performance of navigational strategies. We speculate that light increment and decrement could lead respectively to opposite effects on NP394-neurons’ neuronal activity (increase vs. decrease of action potential frequency). Thus, information about temporal light cues would be transmitted by temporal changes of neuronal activity. It seems likely that either chronically silencing or hyper-activating NP394-neurons would interfere with the proper transmission of temporal variations in cell activity. In turn, this inability would result in similar defects on larval performance of navigational strategies based on temporal information processing. That genetically silencing as well as hyper-activating the same neurons activity can lead to similar defects in visually-driven behavior is also reported elsewhere (Pauls et al., 2015). However, the use of different assays, analysis and effector lines can lead to different results. All three studies have in common that NP394-neurons are highly important for larval light behavior (Gong et al., 2010; Yamanaka et al., 2013).

The Information Flow From the Visual System to NP394-Neurons … and Back?

This work was funded by the Swiss National Science Foundation (Schweizerischer Nationalfonds zur Förderung der Wissenschaftlichen Forschung; 31003A_149499 and 31003A_169993 to SS) and the European Research Council (ERC-2012-StG 309832-PhotoNaviNet to SS).

We thank a lot our colleagues from the University of Fribourg for fruitful discussions and comments.

The Supplementary Material for this article can be found online at: https://www.frontiersin.org/articles/10.3389/fnbeh.2018.00305/full#supplementary-material

Copyright © 2018 Humberg and Sprecher. This is an open-access article distributed under the terms of the Creative Commons Attribution License (CC BY). The use, distribution or reproduction in other forums is permitted, provided the original author(s) and the copyright owner(s) are credited and that the original publication in this journal is cited, in accordance with accepted academic practice. No use, distribution or reproduction is permitted which does not comply with these terms.