The neural underpinning of religious beliefs: Evidence from brain lesions

Religious beliefs emerged in conjunction with moral beliefs, political, and legal beliefs (Cristofori and Grafman, 2017). As pointed out by Oviedo and Szocik (Oviedo and Szocik, 2020) recent debates attempted to determine whether compared to other beliefs, religious beliefs have a specific (Van Leeuwen, 2014) or shared cognitive structure (Boudry and Coyne, 2016). Empirical evidence supports both positions (Levy, 2017; Van Leeuwen, 2018), while neuroscientific findings support a shared neural network between religious and other beliefs [e.g., political beliefs (Cristofori et al., 2015)]. Religious beliefs shape a person's character and influence daily decision-making and social interactions (Cristofori and Grafman, 2017). Religious beliefs are often concerned with the existence of supernatural agents and are often entangled with moral, political, economic, and legal beliefs that have collectively had a profound influence throughout known human history. Their pervasiveness and power have suggested they have a special status in the human brain. However, despite being much in need of investigation, studying the neurobiological basis of religious beliefs has proved difficult. Here, we focus on the contribution of a set of brain-lesions studies that shed light on the neurocognitive underpinnings of religious beliefs. We then compare the findings of these brain-lesions studies with results from neuroimaging studies.

Lesion studies were among the first approaches to investigating how neural-anatomy relates to brain-function (Harlow, 1848). Since the 1990 s, however, functional neuroimaging studies have come to dominate functional-anatomic brain research [e.g., (Fox and Raichle, 2007; Raichle, 2009)]. Despite their popularity, functional neuroimages studies have two limitations. First, while such studies can reveal correlations between brain activation and behavior (e.g., area X is active when behavior y is present), they are limited in their scope for providing causal understanding about the relationship (Siddiqi et al., 2021). The extent to which randomized controlled experiments may manipulate brain anatomy is clearly limited. Second, even where interventions may in principle yield causal inferential knowledge, in practice, most neuroimaging studies are underpowered [e.g., (Marek et al., 2022)]. On the other hand, the distribution of brain lesions across a population is typically a matter of chance. For this reason, by comparing religious cognition in a population with focal lesions and without lesions, causal identification if functional neuroanatomical relationships may be possible. Another virtue of functional neuroanatomical lesion studies of religious cognition, as we shall next describe, is that they are not underpowered. It is important to acknowledge that even whether brain lesions mapping is a model for studying structure/function relationship, lesions emerging from a traumatic brain injury can involve adjacent brain areas that, may accommodate different neurological and/or cognitive functions. For instance, see Rorden et al. recommendations (Rorden et al., 2009) for performing lesion behavior mapping. We do note, however, that we have studied penetrating traumatic brain injuries and, in that case, identification of the lesion parameters like volume loss and areas affected are made somewhat easier by the relative focality of the lesion (Raymont et al., 2011). In addition, we must highlight the studies presented here involve a slightly different cohort number, depending if the participant performed the test or not. As a reminder, our participants were tested over a 1-week period, with extensive neuropsychological and experimental assessments (for more details see Raymont et al., 2011).

The Vietnam Head Injury Study [VHIS (Raymont et al., 2011)] is a longitudinal follow-up of American male combat veterans who served in the Vietnam War, most of whom suffered from focal penetrating traumatic brain injury (pTBI). This dataset provide data on participants who are similar in age, and education level, and is unique in that it includes pre-injury intelligence. The study has followed the veterans (those with, and those without, focal brain lesions) for about 50 years post injury. Particularly, in the final phase of the VHIS (2008–2012), 169 participants (134 with pTBI, 35 with no injury) were assessed for executive functions, social cognition, personality, as well as large battery of tests dedicated to religious beliefs, including fundamentalism, God-Image, and mystical experiences. Individuals studied here are from a monotheistic culture with one God (or no God) rather than many Gods.

The ventromedial prefrontal cortex and its involvement in religious beliefs

More recently, Cristofori et al. (2021) investigated the neural interplay between empathy and personal relationship with God. Extending previous observations that theory of mind networks is recruited during prayer (Boyer, 2003, 2008), the authors found that people with vmPFC damage reported higher scores on the personal relationship with God inventory (Lawrence, 1997) even when they were not praying. The results showed that vmPFC and posterior superior temporal sulcus/temporoparietal junction (pSTS/TPJ) lesions, associated with the strength of the personal relationship with God, affected empathetic responses. The authors suggested that the neurological networks underpinning God representations amplify human empathetic responses. The cultural evolutionary study of religion has argued that supernatural beliefs evoke pro-social responses because people fear the wrath of Gods (Atran and Norenzayan, 2004). In accordance with other studies e.g., (Norenzayan et al., 2012), our findings imply that, in contrast to the focus of the evolutionary literature on punishment, greater attention should be addressed to investigating the mechanisms by which the religious belief system modulates empathetic responses to others. It may seem that a stronger relationship with God, based on the lesioned right vmPFC, is counterintuitive. However, a stronger relationship with God post-injury might be due to the crucial role of the vmPFC in scaling and evaluating social behavior (Moretti et al., 2009; Cristofori et al., 2015). Counterintuitive behavior changes provided by lesion-free contralateral homotopic areas are documented in the neuroscientific literature. However, recovery from severe and complex neural deficits may be more dependent upon extended neural networks rather than on a confined neural structure.

The dorsolateral prefrontal cortex and its involvement in religious beliefs

The increase of fundamentalism and diminished flexibility and openness might be related to hemisphere dominance laterality. There is evidence that the left hemisphere is focused on facts whereas the right hemisphere represents contextual information and, therefore more adapted to specific situations (McGilchrist, 2012). Moreover, in mental tasks, like meditation, left-brain dominance is effective in top-down regulation, while interhemispheric integration of facts and context takes place in anterior brain areas (Raffone et al., 2019). In addition, other psychological factors such as emotional support and self-efficacy (Zahodne et al., 2014) may influence diminished cognitive resources and induce increased fundamentalism to control new experiences and daily life.

In summary, the lesion studies we describe above identify a network of neural substrates involved in the production of religious cognition, and clarify the functional relationship between religious beliefs, mystical experience, executive control, emotional regulation, rigidity of ideological commitments, and other features of social cognition. The following Table 1 summarizes the main results. 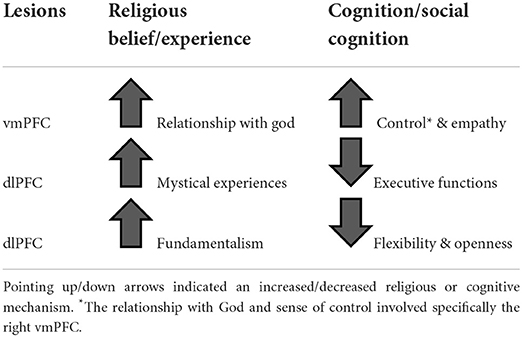 Table 1. Represents a summary of how damage to a brain region affects religious beliefs/experience, cognition/social cognition.

We have delineated a network of lesioned areas within the prefrontal cortex including dlPFC and vmPFC, and more posterior regions such as superior temporal cortex (STC), and pSTS/TPJ (default mode network). More importantly, the network involved included areas damaged in both hemispheres, i.e., vmPFC on the right (belonging functionally to the default mode network) and dlPFC on both sides (belonging functionally to the fronto-parietal control network). In addition, spared areas of the left hemisphere might have driven recovery, e.g., left vmPFC homotopic to its damaged right counterpart.

Our results support the belief system model proposed by Seitz and collaborators (see Seitz et al., 2018). According to the credition model, beliefs are the result of neural processes involving the perception and evaluation of external information, and they drive individuals' decisions. Beliefs are unique representations with imaginative and emotional content, using linguistic and memory functions by which beliefs can be expressed, stored, and recalled (Seitz, 2022). Beliefs are fundamental cognitive constructs connecting people's prior experiences with their future behaviors (Krueger and Grafman, 2017).

Questions concerning the Vietnam Head Injury Study can be directed to JG, jgrafman@northwestern.edu.

This research was supported by the Therapeutic Cognitive Neuroscience Fund (BG). The funder played no role in the design of this study or the interpretation of its results.

The authors thank all the Vietnam veterans, without their long-term commitment to improving the health care of veterans, these studies could not have been completed.

McGilchrist, I. (2012). The Master and His Emissary: The Divided Brain and the Making of the Western World. Loondon: Yale University Press.

Copyright © 2022 Cristofori, Cohen-Zimerman, Bulbulia, Gordon, Krueger and Grafman. This is an open-access article distributed under the terms of the Creative Commons Attribution License (CC BY). The use, distribution or reproduction in other forums is permitted, provided the original author(s) and the copyright owner(s) are credited and that the original publication in this journal is cited, in accordance with accepted academic practice. No use, distribution or reproduction is permitted which does not comply with these terms.

Credition - An Interdisciplinary Approach to the Nature of Beliefs and Believing