This study presents an online tuning proportional-integral-derivative (PID) controller using a multilayer fuzzy neural network design for quadcopter attitude control. PID controllers are simple but effective control methods. However, finding the suitable gain of a model-based controller is relatively complicated and time-consuming because it depends on external disturbances and the dynamic modeling of plants. Therefore, the development of a method for online tuning of quadcopter PID parameters may save time and effort, and better control performance can be achieved. In our controller design, a multilayer structure was provided to improve the learning ability and flexibility of a fuzzy neural network. Adaptation laws to update network parameters online were derived using the gradient descent method. Also, a Lyapunov analysis was provided to guarantee system stability. Finally, simulations concerning quadcopter attitude control were performed using a Gazebo robotics simulator in addition to a robot operating system (ROS), and their results were demonstrated.

In the 4th industrial revolution era, the application of multi-copters has significantly expanded, and it has thus attracted the interest of many researchers specialized in multi-copter control engineering. Multi-copters need to maintain accurate attitudes to ensure stable flight, so the development of accurate and stable controllers for multi-copters is essential. The most popular controller used for multi-copters is the cascaded proportional-proportional integral derivative controller (PPID) (Hernandez and Frias, 2016; Salas et al., 2019; Santos et al., 2019; Xuan-Mung and Hong, 2019a,b). Since PID is a linear controller, it is generally hard to use to achieve the highest control performance for non-linear control systems (Sarabakha et al., 2017). Furthermore, in the design of a PID controller, it is necessary to obtain the exact mathematical model of the control system and to optimize the gain value to achieve the desired performance. However, this work requires complexity calculations and an accurate modeling plant.

Gain tuning for PID controllers is time-consuming, as it depends on the knowledge of dynamic plants and the experience of expert operators (Kim et al., 2007). Mathematical models are different, as they depend on the size and appearance of multi-copters. Even if it is the same aircraft, the center of gravity can be different (Kurak and Hodzic, 2018). Therefore, the gain values are always flexible, and it may take longer to find suitable values. However, such tasks must be completed correctly, as an incorrect calculation can lead to terrible problems, such as falling or bumping into a people or objects. In past decades, many studies have been conducted to solve such problems (time-consuming, costly, etc.; Fatan et al., 2013; Kuantama et al., 2017; Noordin et al., 2017; Rouhani et al., 2017; Sumardi and Riyadi, 2017; Prayitno et al., 2018; Thanh and Hong, 2018; Chen et al., 2019; Rabah et al., 2019; Soriano et al., 2020). The Ziegler Nichols method is a well-known for tuning PID parameters (Azman et al., 2017). However, it produces oscillatory responses and yields overshoot problems (Zahir et al., 2018). Moreover, it cannot be applied in the online-tuning of parameters, and the control performance can be further improved.

In recent years, many studies have investigated the fuzzy neural network (FNN), which is a combination of fuzzy systems and neural networks. Therefore, combined FNN systems have the advantages of both fuzzy systems and neural networks, such as human-like reasoning and learning capabilities. Using the neural network structure, FNN parameters can be trained online to achieve suitable values. According to the above discussions, this study presents a method for auto-tuning PID parameters using multilayer fuzzy neural network (PID-MFNN) to control the attitude the quadcopters. Compared with the previous studies (Wang et al., 2017; Davanipour et al., 2018; Tripathy et al., 2019), our proposed PID-MFNN has some advantages, such as no need for offline training. The major differences and improvements among this study and related works are shown in Table 1. Also, the fuzzy weights and fuzzy membership functions can be updated online, and the multilayer structure is applied to improve the control performance. The main contributions of this study are summarized as follows: (1) the successful design of a multilayer structure was provided to improve the learning ability and flexibility of a FNN; (2) the adaptation laws for updating the parameters of a controller online were derived by using the gradient descent method; (3) the simulation results of controlling the attitude of a quadcopter were provided to illustrate the effectiveness of the control design method.

Table 1. The major differences and improvements among this study and related works.

The quadcopter schematic and its reference frames are shown in Figure 1. In which, the earth-frame and quadcopter body frame are denoted by E(xE, yE, zE) and B(x, y, z). The dynamic equations of the quadcopter are given as: 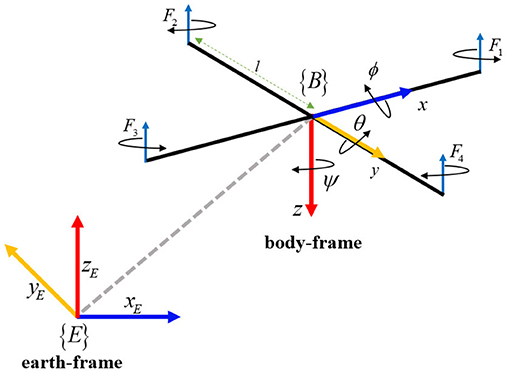 where θref, ϕref, and ψref are the angle references of the roll, pitch, and yaw, respectively.

Figure 3. Control scheme of the quadcopter attitude controller (Θ is replaced for ϕ, θ, or ψ).

The output of the PID inner-loop controller is given by

To obtain suitable values for the PID gains in the outer-loop and inner-loop controller, the PID-MFNN was designed in the following section to adjust the gains for the PPID controller online.

The fuzzy rule forms for the proposed PID-MFNN controller are:

where ii is the fuzzy input; μijk is the membership function (MF) for the input i-th, block j-th, and layer k-th; wklo is the fuzzy weight for the layer k-th, rule l-th, and output o-th.

1) The input space: the fuzzy input vector, I = [i1, i2, …, ini], is prepared in this space. Each node corresponds to one input and is directly transferred to the next space.

where mijk and vijk are the mean and variance of the GMFs.

where fkl is the fuzzy firing strength for the l-th rule in the k-th layer.

Then, the fuzzy firing vector is presented as

5) The output space: the final outputs of this space are the PID gains for the outer-loop and inner-loop controllers. Defuzzification is performed using the product operation as follows:

Using the proposed MFNN to adjust the PID gains online, the desired performance of the control network can be achieved. The adaptation laws for updating the parameters of the proposed PID-MFNN controller online are explained in the following section. 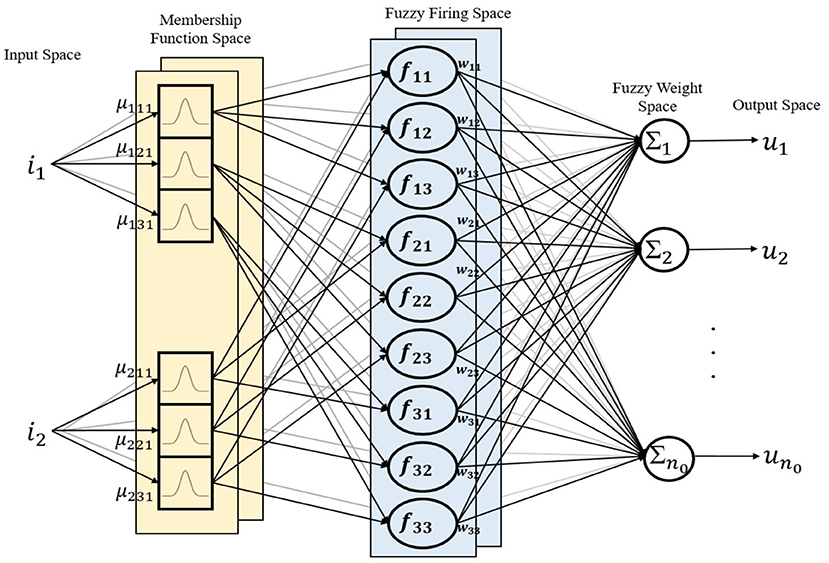 Figure 6. Fuzzy membership function and rule base: (A) the conventional fuzzy system and (B) the proposed multilayer fuzzy neural network with two layers.

First, considering the outer-loop controller, Equation (3) can be rewritten, where the gains Gθ, Gϕ, and Gψ are obtained using the output of the proposed MFNN in Equation (10).

By rewriting the Equation (6),

A Lyapunov function is defined as , using the gradient descent approach and chain rule, and the parameter update laws for PID-MFNN can be obtained as follows:

Then, considering the inner-loop controller, Equation (5) can be rewritten, where the gains , , , , , , , , and are obtained using the outputs of the proposed MFNN.

By rewriting the Equation (4),

A Lyapunov function can be defined as , using the gradient descent approach and chain rule, and the parameter update laws for PID-MFNN can be obtained as:

where , , and are the connecting weight, mean, and variance of the inner-loop MFNN controller; TΘ can be Tϕ, Tθ, or TΨ, which are the quadcopter transfer functions for the yaw, pitch and roll angles; , , and are the positive learning rates.

Using the proposed adaptation laws in (16–18) and (23–25), the parameters of the proposed PID-MFNN can be obtained. Then, the suitable gains for the outer-loop and inner-loop PPID controller can be achieved.

The Lyapunov cost function is defined as

By applying the Taylor expansion,

The computational complexity of our approaches using big O notation is given as:

T: is the simulation time.

nj1: the number of membership functions in input 1.

nj2: the number of membership functions in input 2.

nk: the number of layers.

This section presents the results of the quadcopter attitude control using the proposed PID-MFNN controller, which is performed using the Gazebo robotics simulator and ROS. The Gazebo simulation is a multi-robot simulator for outdoor environments. It supports the interface of the quadcopter's firmware, Pixhawk 4 (PX4). Therefore, it is easy to implement our algorithm on the quadcopter and to receive or transmit necessary data. The basic commands using MAVlink are also supported. Inside PX4, many terrains, sensors, and quadcopter types are provided using JavaScript. In this study, the 3D Robotics IRIS quadcopter was used without additional sensors, which were simulated on the basic terrain as a real world environment for verifying our designed control system. The wind disturbances of 1.0 m/s are considered as external disturbances.

The quadcopter parameters used in this model were chosen as shown in Table 2. 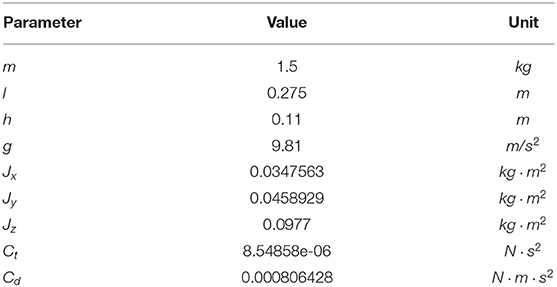 Table 2. The 3DR's IRIS parameters inside the Gazebo simulation used in the experiment.

The goal of the control system is to control the attitude of the quadcopter following the reference set-point trajectory:

where ns is the number of samples. 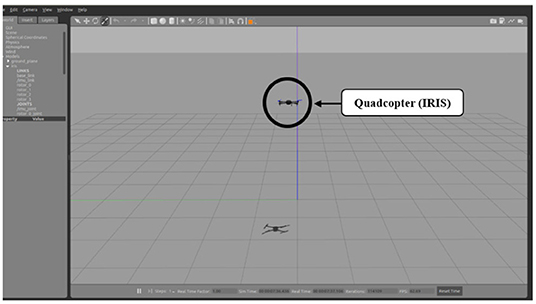 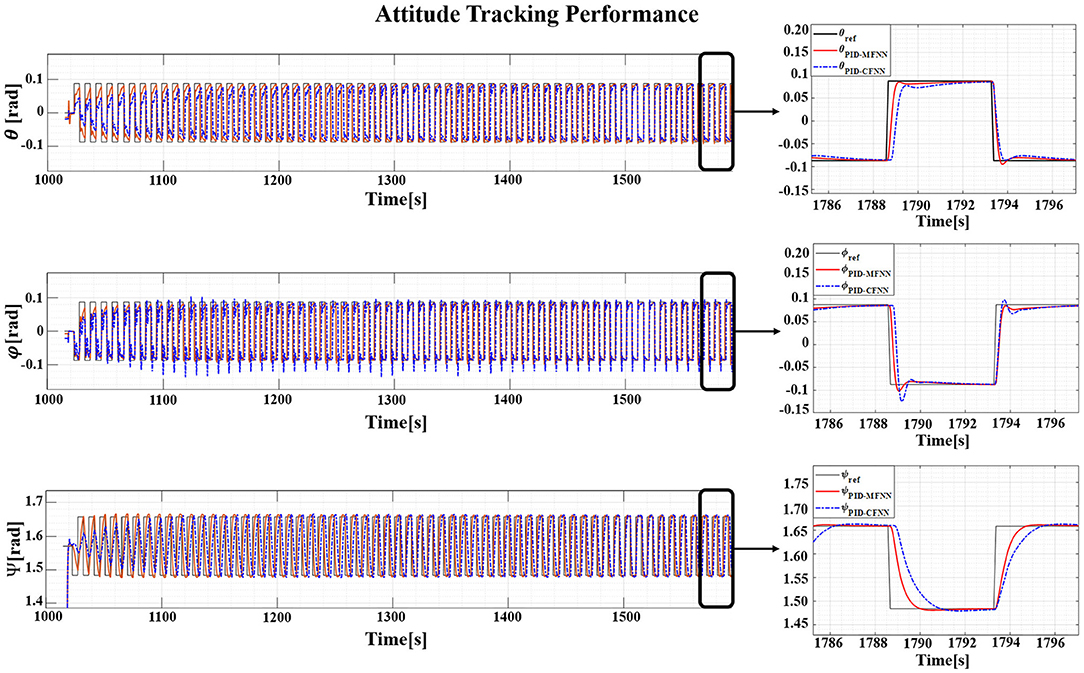 Figure 8. The tracking performance for the quadcopter attitude control for the square wave commands.

Figure 9. The control signals for the quadcopter attitude control for the square wave commands. 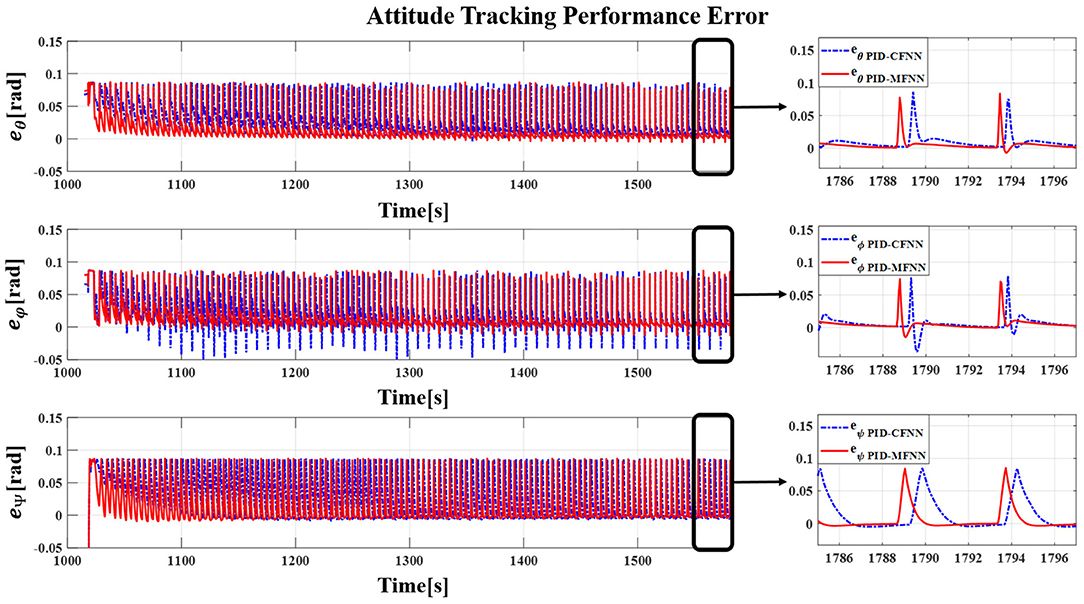 Figure 10. The tracking errors for the quadcopter attitude control for the square wave commands. 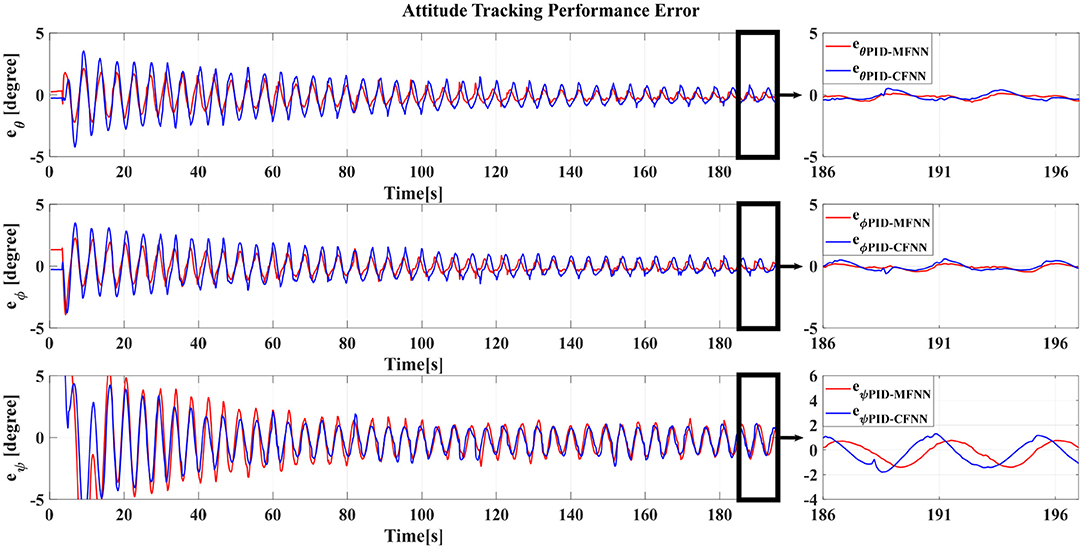 Table 3. RMSE comparison for the quadcopter attitude control for the square wave commands.

Table 4. RMSE comparison for the quadcopter attitude control for the sine wave commands.

Remark 1. The conventional PID usually hard to achieve high control performance for controlling non-linear systems due to its parameters are usually tuned for local points based on a linearization method (Mohan and Sinha, 2008; Cetin and Iplikci, 2015). Therefore, it is not suitable for controlling highly complex and non-linear systems, such as quadcopters. However, in our proposed PID-MFNN method, we designed adaptation laws for updating the MFNN network parameters online, so the output of the MFNN network can auto-tune the PID gains. Therefore, our proposed PID-MFNN is suitable for quadcopters as well as other non-linear control systems.

Remark 3. The difficulties and limits in this study are described as follows. When applying our method in an experiment with real quadcopters, suitable initial parameters needed to be chosen. Otherwise, control could be lost. In our study, the simulation results were obtained using a Gazebo robot simulator, and it was easy to choose these parameters using the trial-and-error method. In our future work, we plan to apply some optimal algorithms to realize suitable initial parameters.

In this study, auto-tuning PID parameters using MFNN were successfully designed for controlling the attitude of quadcopters. The proposed method provided an effective method for obtaining suitable gains for PID controllers without the need for a mathematical system model or complicated calculations. In addition, a new multilayer structure was provided to improve the learning ability and flexibility of the used FNN. The parameters of the proposed network could be updated online using adaptation laws. Finally, the effectiveness of the proposed method was illustrated through the results of the conducted numerical simulations of quadcopter attitude control using a Gazebo robotics simulator and ROS. Our designed controller can also apply to a real quadcopter, and in our future work, we plan to apply some optimal algorithms to achieve suitable initial parameters.

This work was supported by the Basic Science Research Program through the National Research Foundation of Korea (NRF) funded by the Ministry of Education (2020R1A6A1A03038540) and by Korea Institute for Advancement of Technology (KIAT) grant funded by the Korea Government (MOTIE) (N0002431, the Competency Development Program for Industry Specialist).

Copyright © 2021 Park, Le, Quynh, Long and Hong. This is an open-access article distributed under the terms of the Creative Commons Attribution License (CC BY). The use, distribution or reproduction in other forums is permitted, provided the original author(s) and the copyright owner(s) are credited and that the original publication in this journal is cited, in accordance with accepted academic practice. No use, distribution or reproduction is permitted which does not comply with these terms.