Circadian activity rhythms for mothers with an infant in ICU

Maternal stress associated with caring for a newborn requiring intensive medical care initiates a cascade of psychological and physiological sequelae (Miles et al., 1999; Holditch-Davis and Miles, 2000; Lee et al., 2005b). Insomnia is not uncommon as it is one of the first indications of increased anxiety and daily stress (Roehrs et al., 2000). Corollary perturbations in patterns of sleep and wakefulness as well as changes in neurological, endocrine, and immune function are also evident (Lazarus and Folkman, 1984; Lazarus, 1999; Ader, 2000; Opp, 2005).

It is well known that sleep/wake patterns are disrupted in mothers caring for newborns. We hypothesize that circadian activity rhythm (CAR) would also be disturbed for a new mother if her infant remains hospitalized after birth in an intensive care unit (ICU). Circadian processes, which are regulated primarily by the suprachiasmatic nuclei (SCN), are highly influenced by extrinsic stimuli such as ambient illumination and social interactions (Lee et al., 2009). These stimuli may be altered while a newborn infant receives care within the hospital environment. To date, only one report used wrist actigraphy data to address CAR with a very small sample of early stage postpartum women, and better CAR was evident when mothers had more nocturnal total sleep time and less daytime sleep (Lee and Kimble, 2009). The purpose of this secondary analysis was, therefore, to describe how CAR was related to self-reported sleep disturbances and fatigue severity among mothers with an infant hospitalized in ICU during the early postpartum period (5th- to 12th-day postpartum). We sought to determine (1) what are the sleep and CAR characteristics among mothers with an infant hospitalized in the ICU during their early postpartum period? and (2) what are the relationships between CAR, objective and subjective sleep measures, and maternal fatigue? We hypothesized during the early postpartum stage, mothers characterized as poor CAR will experience more sleep disruption and higher level of fatigue severity compared to women who are good CAR.

To further explore the relationships between CAR, sleep, and fatigue, a secondary data analysis was conducted with data from three studies that used the same inclusion/exclusion criteria. The first study (in San Francisco area) was a descriptive correlational study to explore the relationships between maternal sleep and fatigue among 30 Chinese-American women (Lee et al., 2005a). The other two samples (in the Metro Atlanta area) were from studies that tested a sleep intervention to improve sleep and well-being in mothers of low-birth weight infants, 20 were from a feasibility study (Lee and Kimble, 2009) and another 22 were from an on-going pilot study. For the last two studies, only the pre-treatment data were analyzed for this paper.

A total of 72 first-time mothers who were in their early postpartum period and with an infant in the ICU were included in this report. Mothers were excluded if any of the following applied: (1) allergic to metal (a contradiction for wrist actigraph), (2) history of an affective illness, (3) current use of medications that may alter sleep (any central nervous system stimulants, depressants, or antidepressant medication), (4) shift worker whose circadian rhythms may already be affected, (5) history of a diagnosed sleep disorder such as sleep apnea or restless legs, which may give a higher waking time from the overnight wrist actigraphy monitoring, (6) under 18 years of age because delayed sleep phase type circadian disorders (late-to-bed, late-to-rise) are very common in adolescents, and (7) mothers who required an extended hospitalization period. A post hoc power analysis was performed; a total sample size of 72 was sufficiently powered to detect a difference in the primary outcome by using an alpha of 0.05, and at least a medium effect size for t-test analysis.

Permission to conduct the study was obtained through the University’s Committees on Human Research and through the Institutional Review Boards at hospital recruitment sites. Table 1 summarizes the demographic characteristics of the study participants. Age ranged from 18 to 43 years, and majority of them were Black (40%) or Asian (41%). After informed consent, the mothers were asked to wear the wrist actigraph (for objective sleep data) and to press the “event marker button” for their bedtimes and rising times. Mothers were also asked to fill out the following questionnaires and keep a sleep diary to record their bed times and rise times to validate wrist actigraphy data. 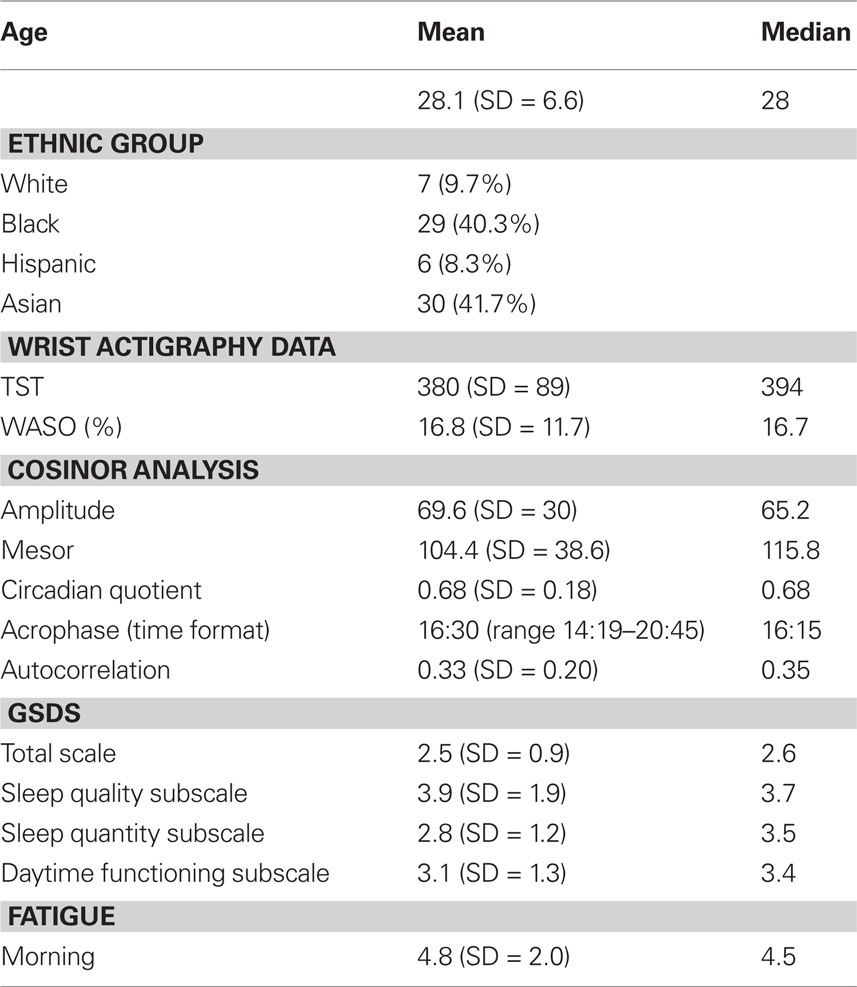 The general sleep disturbance scale (GSDS) was used to assess subjective sleep characteristics. The GSDS is a 21-item, 0–7 rating scale, which includes seven subscales: sleep onset, waking up during sleep, waking up too early from sleep, quality of sleep, quantity of sleep, daytime functioning, and use of substances to help induce sleep (Lee and DeJoseph, 1992). The GSDS is consistent with the DSM-IV criteria for insomnia symptoms. Higher scores indicate more disturbed sleep, and a mean score of 3 on the total GSDS or any of the subscales represents 3 days per week and is considered a clinically significant sleep disturbance (Lee and DeJoseph, 1992). The Cronbach alpha coefficient for the overall scale was 0.80 in the current sample.

The Lee fatigue scale (LFS) is 13-item numerical rating scale with high internal consistency reliability in previous research (Lee et al., 1991). It measures fatigue severity in the morning (rising time) using numerical rating scales from 0 (not at all) to 10 (extremely), and a morning score of 3.3 or higher indicates clinical significant fatigue. To reduce participant burden and redundancy of items, only 7 of the 13 fatigue items were used and the Cronbach alpha coefficients for the seven-item version remained high, ranging from 0.86 to 0.96 in this sample.

Table 3. Sleep and fatigue characteristics based on circadian quotient. 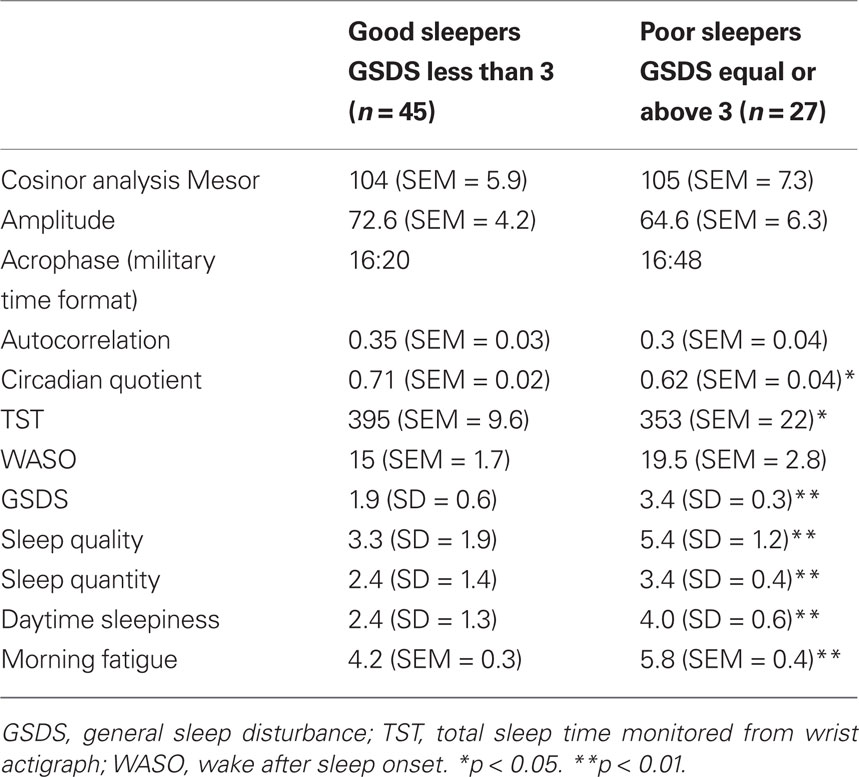 Research on sleep for early postpartum stage women with a hospitalized infant, either pre-term or full-term with a medical problem, is very limited. The results from this study supported our hypothesis that mothers with poor CAR experienced more sleep disruption and higher fatigue severity compared to those with good CAR. These early stage postpartum women’s sleep quality and quantity were considerably poor, their CAR is not well synchronized, and they also experienced clinically significant morning fatigue severity. The nocturnal TST of 6.3 h from the study participants is far from the recommended 7–8 h (NSF, 2005).

Nocturnal TST for first-time mothers with a healthy infant has been documented as less than 7 h in the first month of the postpartum period (Gay et al., 2004). It is understandable that mothers with a healthy newborn at home are likely to be deprived of sleep because their newborns demand care; however, mothers in this study reported similar nocturnal TST even though their infants were still in the hospital. Since sleep loss increases risk of cardiovascular disorders and type 2 diabetes (Alvarez and Ayas, 2004), it is important to monitoring these physical problems for this population of women if they suffered long-term sleep deprivation.

Data regarding CAR is very rare and there is almost no existing record for postpartum women. A landmark study used wrist actigraphy to monitor 23 healthy adults (10 males and 13 females), aged 22–54 years, for 5 days; the mesor, amplitude, and circadian quotient for the female participants was 151.7, 115.8, and 0.76, respectively, and the acrophase was between 13:42 and 15:18 (Brown et al., 1990). A recent study investigating CAR among breast cancer patients found that their mesor and amplitude prior to chemotherapy were 132.3 (SD = 24.6) and 97.2 (SD = 22.8). The mean circadian quotient was 0.73 and a more robust activity rhythm was associated with lower fatigue and higher performance status for women during chemotherapy for breast cancer (Berger et al., 2009). Yet, the postpartum mothers in these three samples experienced lower amplitude, mesor, and circadian quotient compared to other populations reported in the literature. Differences for our study participants may be a result of their early postpartum stage, distress due to their unexpected early childbirth, and their infant’s medical condition.

Circadian activity rhythm has also been found to be related to the severity of dementia (Ancoli-Israel et al., 1997; Gehrman et al., 2005) and seasonal affective disorder (Winkler et al., 2005). The cosinor analyses indicated that mothers in this study experienced poor CAR; the associations between CAR and sleep and fatigue suggest an individual with a better CAR will perceive better sleep and less fatigue severity. Poor CAR could have resulted from multiple factors, such as stressful life events due to their infant’s medical conditions, postpartum hormonal issues, and poor sleep hygiene, including light exposure levels (Lee, 2003). In general, the neonatal ICU is surrounded by artificial dim light to minimize the stimulus for infants and promote their development. In addition to their distressed emotional status, the ICU environment has persistent exposure to lighting and, coupled with the loss of a discrete diurnal light/dark cycle within the hospital, maternal sleep disruption may be exacerbated. All of these factors need to be further explored to better understand altered CAR and sleep patterns for this specific subgroup of postpartum women. Prolonged exposure to artificial light may alter the entrainment of the SCN and circadian pacemaker, and we would speculate that loss of entrainment to light/dark cycles leads to self-reported sleep problems and excessive fatigue.

The American Academy of Sleep Medicine recommends wrist actigraphy monitoring for at least 72 h; however, the minimum needed to obtain sufficient peaks and troughs is 36 h to calculate 24-h rhythm parameters. The majority of the study participants only had 48-h activity data due to subject burden. An extended activity monitoring should increase the internal validity for the findings. However, in this study, similar characteristics were found between the good and poor sleepers classified by using the GSDS and by using the circadian quotient median split. Mothers who had a higher self-reported more general sleep disturbances, had a poor circadian quotient, and more sever morning fatigue. Mothers with poor circadian quotient had higher self-reported sleep disturbances and had more severe morning fatigue. In addition, there was a statistically significant association between poor circadian quotient and poor self-report general sleep disturbances. From the correlations between the objective and subjective measurements, it can be said that if an individual self-reported sleep disruption, we should also evaluate their activity rhythms. Since wearing a wrist actigraph may become a burden to participants, and an actigraph is not generally available in most clinical settings, clinician can use GSDS for an initial assessment in this population of mother.

Although this study has added some new knowledge, findings from this present study need to be interpreted with caution due to some limitations. For example: (1) lack of a control group of mothers whose babies were being cared for at home, (2) monitoring of how long the mothers spent at the NICU under ambient illumination was absent, (3) some confounding variables such as the levels of maternal stress and anxiety could be different based on their infant gestational age and their other life events, and (4) contextual variables such as ethnicity could not be controlled in the study. Thus, the internal validity and generalizability may be limited.

Shih-Yu Lee was supported by T32NR 07088, the Graduate Diversion at University of California, San Francisco, AWHONN, the intramural grant at Georgia State University, and the NIH/NINR (1R15NR010152-01A1). The authors thank the volunteers who participated in the studies for making it possible.

NSF. (2005). Helping yourself to a good night’s sleep. Retrieved October 2, 2005, from www.sleepfoundation.org

Copyright: © 2010 Lee, Lee, Aycock and Decker. This is an open-access article subject to an exclusive license agreement between the authors and the Frontiers Research Foundation, which permits unrestricted use, distribution, and reproduction in any medium, provided the original authors and source are credited.