An 80-year-old woman with rheumatoid arthritis had gait difficulties and frequent falls. MRI of the brain showed an extra-axial enhancing lesion overlying the right frontal–parietal cortex, that progressively extended to the contralateral side. This was accompanied by further decline in her functional status. We discuss the diagnostic and therapeutic approach of a pachy–leptomeningeal process in a rheumatoid patient.

An 80-year-old woman presented to the neurology clinic with a history of unsteady gait and frequent falls and was admitted to our hospital for further evaluation. She had history of arterial hypertension, chronic obstructive pulmonary disease, and long-standing rheumatoid arthritis (RA) treated with prednisone and plaquenil. In her youth, she had pulmonary tuberculosis (TB) treated with streptomycin and para-aminosalicylic acid. Six months prior to her clinic visit, she was admitted to a local hospital for surgical treatment of a small bowel obstruction. Postoperatively, she developed atrial fibrillation. She received intravenous unfractionated heparin and then bridged to warfarin (target INR 2.0–3.0). While at the hospital, she fell and had a mild traumatic subarachnoid hemorrhage (SAH). She made a good recovery and was discharged home on warfarin. Four months following hospital discharge, she fell again and had a left femoral fracture requiring hip replacement.

Symptoms progressed, and a follow-up gadolinium enhanced MRI showed worsening of the right-sided leptomeningeal and dural thickening as well as progression of the leptomeningeal enhancement over the left posterior parietal and occipital lobes (Figures 3A,B). A second lumbar puncture was performed. CSF was clear with an opening pressure of 8 cm of H2O. There were 9 RBCs and 12 WBCs (78% lymphocytes). CSF glucose was 60 mg/dl, and the protein content was 77 mg/dl. Cytology was again negative for malignant cells. Flow phenotyping showed mixed lymphoid population, predominantly T-cells and occasional B-cells, with no evidence of clonality. Bacterial, fungal, and AFB cultures were negative in blood and CSF. Quantiferon gold testing for TB was positive.

Figure 3. Increased right-sided leptomeningeal and dural thickening with worsening of leptomeningeal enhancement over the left posterior parietal and occipital lobes.

A brain/meningeal biopsy was done which showed a chronic inflammatory process with numerous plasma cells with Russell bodies and granulomatous reaction of the leptomeninges and dura. Findings were consistent with rheumatoid pachy and leptomeningitis (Figures 4A,B). In addition, there was an acute and chronic leptomeningitis with focal giant cell reaction with secondary parenchymal perivascular lymphocytic infiltrates with reactive gliosis (Figures 5A–D). The leptomeninges contained a focal abscess formation with suppurative inflammation (Figures 6A,B). Special stains including GMS, AFB, FITE, Gram, and cultures were negative. Sections of the pachymeningitis were sent for mycobacterium TB DNA PCR, and were also negative. 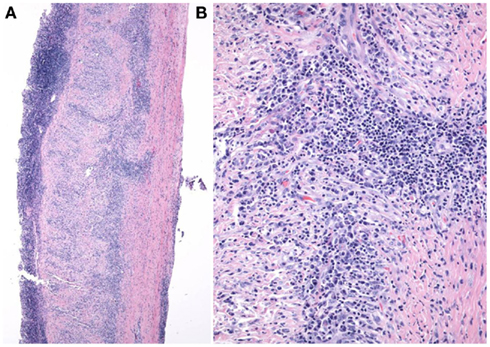 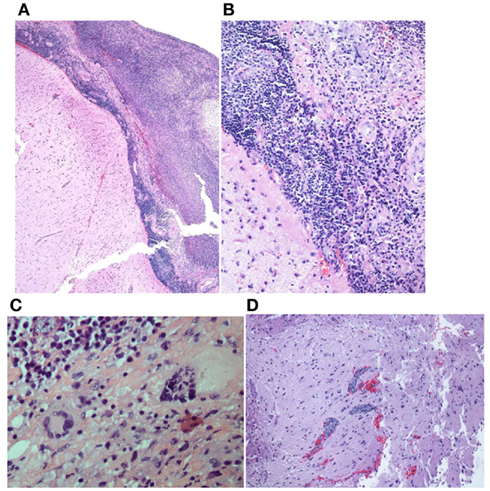 Bathon et al. (1989) reviewed 19 patients (10 men and 9 women) with inflammatory rheumatoid CNS disease. Most cases were diagnosed at autopsy. No MRI was performed. Most patients had long-standing RA, with mean duration of illness of 14 years at onset of neurological symptoms. Although rheumatoid CNS involvement may occur during the phase of acute synovitis, less than half of these patients had active synovitis when neurological symptoms developed. The authors concluded that RA duration and activity were unreliable indicators to diagnose rheumatoid CNS involvement. However, rheumatoid meningitis may occur early in the course of the disease and may even precede synovitis (Jones et al., 2006; Starosta and Brandwein, 2007).

In Bathon’s review, the clinical presentation of rheumatoid meningitis was characterized by altered mental status in 47% of cases, cranial neuropathies in 26%, hemiparesis/paraparesis in 21%, seizures in 21%, and headaches in 11%. Inflammatory rheumatoid CNS disease may produce pachymeningitis and leptomeningitis, as in the case of our patient (Bathon et al., 1989; Kato et al., 2003; Jones et al., 2006; Shimada et al., 2009). If the dura matter is predominantly affected, these patients present with pachymeningitis, characterized by headaches and cranial neuropathies caused by inflammation or dural fibrosis. If the leptomeninges are predominantly affected, mental status changes, gait imbalance, memory loss, depression, seizures, or paresis are more common (Kupersmith et al., 2004).

Along with rheumatoid meningitis, Bathon identified other extra-articular manifestations like subcutaneous nodules in 67% of cases, visceral nodules in 47%, and both in 40%. Our patient had lung and spleen nodules; these may have been a manifestation of RA, or related to her previous TB.

The final diagnosis is ultimately histopathological. In Bathon’s review, rheumatoid meningitis diagnosis was not achieved until autopsy in 17 of 19 patients. In two patients diagnosis was made by open brain biopsy. On gross examination, thickened meninges and nodules or plaques were observed frequently. Microscopic pathological examination demonstrated three abnormal patterns: rheumatoid nodules, non-specific meningeal inflammation, and vasculitis. Nodules were the most common finding (68%) and were histologically identical to subcutaneous rheumatoid nodules. Nodules were located in the cranial meninges (92%) and in the choroid plexus (15%). There were two cases affecting the spinal meninges. Nodules were absent in the brain parenchyma or spinal cord. Non-specific inflammatory infiltrates in the leptomeninges or pachymeninges, with mononuclear cells, particularly plasma cells, and less frequently necrosis and multinucleated giant cells, was found in 63% of cases. Reasons for a meningeal predilection, particularly the dura, rather than brain parenchyma, by invading inflammatory cells are unclear. Autoimmunity to collagen, a major component of the dura but not brain parenchyma, may play a role (Bathon et al., 1989). Vasculitis was identified in 37% of cases and involved the brain, spinal cord parenchyma, as well as the meninges. Vessel wall infiltrates consisted of lymphocytes and plasma cells. The authors concluded that CNS rheumatoid nodules might be considered specific for CNS rheumatoid disease. In instances of non-specific chronic inflammatory infiltration by vasculitis or meningitis the preponderance of plasma cells may distinguish CNS rheumatoid disease from other connective tissue disorders such as systemic lupus erythematosus (SLE) or Sjögren syndrome. Among patients diagnosed at autopsy, the most common findings are rheumatoid nodules. Among patients diagnosed by biopsy, it is a non-specific inflammatory infiltration, probably secondary to limited tissue sampling (Bathon et al., 1989; Jones et al., 2006; Starosta and Brandwein, 2007; Li and Kuzuhara, 2009; Shimada et al., 2009). In our patient, biopsy showed chronic inflammatory infiltration rich in plasma cells in both the pachymeninges and the leptomeninges. There was also a small focal abscess even though cultures were negative. In Bathon’s report, polymorphonuclear infiltrates were found in three patients (25%). Although our patient had a positive quantiferon TB gold test, likely due to her previous TB, AFB stains, cultures, and mycobacterium TB DNA PCR were negative in the meningeal samples.

There are no clear guidelines for the treatment of rheumatoid meningitis. Cyclophosphamide, azathioprine, and methotrexate in combination with corticosteroids have been recommended (Kato et al., 2003; Kupersmith et al., 2004; Jones et al., 2006; Starosta and Brandwein, 2007; Li and Kuzuhara, 2009; Shimada et al., 2009). Improvement has been obtained with corticosteroids alone. This suggests that immunosuppressants may not always be necessary in the induction phase of treatment, although they may be required to achieve tapering or cessation of corticosteroids to avoid potential long-term adverse effects (Shimada et al., 2009). Recurrence of rheumatoid meningitis in a patient treated with infliximab (Chou et al., 2006) and pachymeningitis occurring after administration of adalimumab have been reported (Ahmed et al., 2006).

Voller, B., Vass, K., and Wanswchitz, J. (2001). Hypertrophic chronic pachymeningitis as a localized immune process in the craniocervical region. Neurology 56, 107–109.

Copyright: © 2011 Servioli, Chugh, Lee and Biller. This is an open-access article distributed under the terms of the Creative Commons Attribution Non Commercial License, which permits non-commercial use, distribution, and reproduction in other forums, provided the original authors and source are credited.