The role of ATP in sleep regulation

One of the functions of sleep is to maintain energy balance in the brain. There are a variety of hypotheses related to how metabolic pathways interact with sleep/wake regulation. A major finding that demonstrates an interaction between sleep and metabolic homeostasis is the involvement of adenosine in sleep homeostasis. An accumulation of adenosine is supplied from ATP, which can act as an energy currency in the cell. Extracellularly, ATP can act as an activity-dependent signaling molecule, especially in regard to communication between neurons and glia, including astrocytes. Furthermore, the intracellular AMP/ATP ratio controls the activity of AMP-activated protein kinase, which is a potent energy regulator and is recently reported to play a role in the regulation of sleep homeostasis. Brain ATP may support multiple functions in the regulation of the sleep/wake cycle and sleep homeostasis.

Introduction: ATP as a Neuromodulator

Sleep is thought to be essential to replenish energy sources in the brain that are depleted during wakefulness. ATP has long been recognized as an intracellular energy source in the brain and multiple other tissues, and the complex regulation of mitochondrial ATP synthesis is triggered within the human brain in response to daily activities (Kagawa, 2010). ATP has also been proposed as a putative transmitter in sensory nerves, motor nerves, and some CNS neurons (Burnstock, 2007, 2009). In the CNS, ATP signaling can regulate both excitatory and inhibitory neurotransmission. Many neurons can release ATP in an activity-dependent manner, and this molecule can act as a potent neuromodulator for neuron–neuron and neuron–glial signaling (Fields and Stevens, 2000; Fields and Burnstock, 2006; Krueger et al., 2008). ATP and its metabolites regulate multiple processes in the nervous system including sleep regulation (Burnstock et al., 2011).

Recently, it was observed in rats that ATP levels in several brain regions (frontal cortex, basal forebrain, cingulate cortex, and hippocampus) are stable during waking but exhibit a surge during the initial hours of sleep (Dworak et al., 2010). This ATP surge displays a significant positive correlation with the intensity of EEG slow wave activity (SWA; 0.5–4 Hz) in non-rapid eye movement (NREM) sleep, a parameter of sleep depth and homeostatic need for sleep. These results suggest that ATP levels drastically change during sleep in several brain regions and are directly related to SWA in NREM sleep (Dworak et al., 2010). Interestingly, sleep deprivation for 3 h induces a significant reduction in ATP concentration in the frontal cortex and lateral hypothalamus (an area known to predominantly contain wake- and REM-active neurons) although sleep deprivation does not affect the VLPO, an area known to predominantly contain sleep-active neurons (Dworak et al., 2010). Thus, elevations in brain ATP consumption caused by prolonged wakefulness may differ depending on the brain region.

The purpose of this review is to provide an overview of the neurobiological evidence for the role of ATP in sleep regulation. In this review, we will first provide the experimental evidence for an association between adenosine (a product from AMP) and sleep regulation. A presentation of the evidence demonstrating the role of gliotransmission in sleep homeostasis as mediated by astrocytes will follow. Finally, we will address the possibility of an involvement of AMP-activated protein kinase (AMPK), a metabolic sensor, in sleep homeostasis. 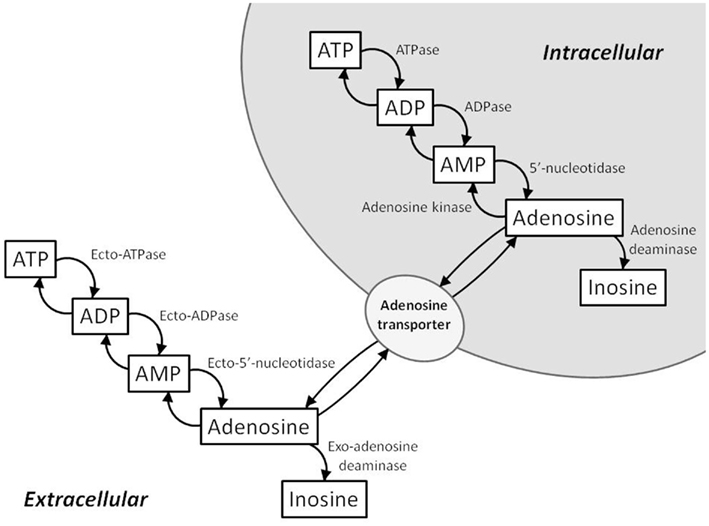 The adenosinergic regulation of sleep is predominantly mediated either via A1 receptors (A1Rs) or A2a receptors (A2aRs). The effects of adenosine in the basal forebrain on recovery sleep mentioned above are mostly mediated by A1Rs. Perfusion of an A1R antagonist into the basal forebrain reduces recovery sleep after sleep deprivation, while an A2aR antagonist had no effect on recovery sleep in rats (Gass et al., 2009). However, evidence for a role of A2aRs in the regulation of sleep has also emerged, especially concerning the actions of A2aRs in the leptomeninges under the basal forebrain that are mediated by prostaglandin D2 and DP1 receptors (Urade and Hayaishi, 2011). In addition, it was reported that administration of caffeine, a non-selective adenosine receptor antagonist, induces arousal effects in wild-type and A1R-knockout mice, although its effect was not observed in A2aR-knockout mice, indicating that the arousal effects of caffeine are dependent on A2aRs (Huang et al., 2005). Thus, adenosine regulates either the amount of sleep or sleep homeostasis in multiple ways depending on the brain area and receptor subtype.

Glia release multiple neuroactive substances that contribute to sleep regulation including ATP, cytokines, and glutamate (Fields and Burnstock, 2006; Krueger et al., 2008). Glia were thought to play a passive and auxiliary role in the brain. However, in the past decade, it has been reported that glia play more active roles in the brain via neuron–astrocyte interactions. Astrocytes can be activated by neurotransmitters released from active neurons they surround. In turn, astrocytes release chemical transmitters to act on neurons pre- and post-synaptically. This process of gliotransmission modulates synaptic activity, with the primary chemicals released from astrocytes being ATP, glutamate, and D-serine, all of which can act to facilitate neural transmission (Hamilton and Attwell, 2010).

Some recent studies have presented evidence that sleep homeostasis depends on gliotransmission and the accumulation of adenosine degraded from ATP. These studies use transgenic mice that express a dominant-negative (dn) SNARE domain selectively in astrocytes, and such mice have impaired gliotransmission (Halassa and Haydon, 2010; Florian et al., 2011). In the dnSNARE mice, SWA in NREM sleep at baseline and during recovery periods after sleep deprivation is attenuated compared with that observed in wild-type mice (Halassa et al., 2009). During sleep deprivation, glutamate released from presynaptic neurons binds to postsynaptic AMPA receptors to facilitate excitatory neurotransmission (Figure 2). Glutamate also binds to metabotropic glutamate receptors on the membranes of adjacent astrocytes and can evoke rises in intracellular Ca2+ concentration in astrocytes. In turn, astrocytes release ATP when intracellular Ca2+ is elevated. ATP released from activated astrocytes is rapidly hydrolyzed to adenosine, which reduces the release of glutamate from the presynaptic terminal by acting on A1 receptors, ultimately resulting in hyperpolarization of the postsynaptic neuron membrane potential (Jones, 2009). The dnSNARE mice, which have an impairment of gliotransmission, display an impaired regulation of sleep homeostasis, suggesting that gliotransmission is essential for sleep pressure accumulation. 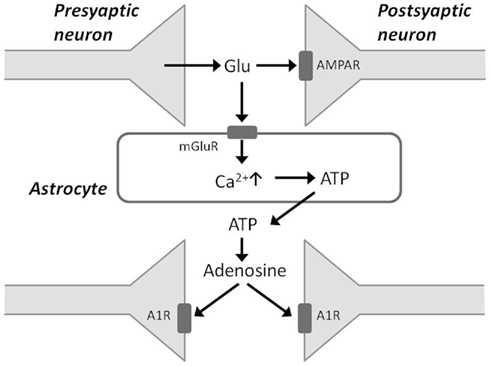 Figure 2. Schematic of gliotransmission via astrocytic processes. Glutamate released from presynaptic neurons binds to postsynaptic AMPA receptors (AMPAR) and also to metabotropic glutamate receptors on astrocytes. This stimulates an increase in intracellular Ca2+ concentration in astrocytes, which in turn release ATP. Accumulation of adenosine from ATP breakdown in the extracellular space acts via adenosine 1 receptors (A1Rs) to depress synaptic activity.

It is also well known that sleep loss can induce a deficit in memory task performance in humans and rodents. The dnSNARE mice were also protected against the effects of sleep deprivation in both non-hippocampal- and hippocampal-dependent memory tasks (Halassa et al., 2009; Florian et al., 2011). In addition, i.c.v. injection of the A1R antagonist 8-cyclopentyl-1,3-dimethylzanthine (CPT) into wild-type mice mimicked the phenotype of dnSNARE mice, suggesting that sleep homeostasis and cognitive deficits are due to adenosine actions via A1Rs. Thus, astrocytes regulate sleep pressure, recovery, and associated cognitive consequences mediated by adenosine in terms of dampening neuronal excitability. Interestingly, extracellular ATP also activates purine P2 receptors (e.g. P2X7) on glial cells to release cytokines such as interleukin-1ß and tumour-necrosis factor-α, which act as sleep regulatory substances (Krueger et al., 2008, 2010). Mice lacking functional P2X7 receptors have attenuated NREM sleep and SWA in NREM sleep during recovery periods after sleep deprivation compared with wild-type mice (Krueger et al., 2010). These data suggest that extracellular ATP and P2 receptors have an important role in the regulation of sleep homeostasis and link neuro- and gliotransmission to sleep.

Pharmacological experiments have indicated that energy depletion using 2,4-dinitrophenol (DNP), which blocks ATP synthesis and increases the AMP/ATP ratio, increases the amount of NREM sleep and also enhances SWA in NREM sleep (Kalinchuk et al., 2003). In agreement with this study, we have recently demonstrated that i.c.v. injection of 5-aminoimidazole-4-carboxamide riboside (AICAR), an AMP-mimicking activator of AMPK, enhances SWA in NREM sleep, while i.c.v. injection of compound C (CC), an AMPK inhibitor, suppresses SWA compared to vehicle injection in mice (Chikahisa et al., 2009). Furthermore, we have demonstrated that 6 h of sleep deprivation increases AMPK activity in the hypothalamus of mice (Chikahisa et al., 2009). This sleep deprivation-induced activation of AMPK is also observed in the basal forebrain, and is accompanied by decreased ATP levels in the same brain regions (Dworak et al., 2010). We also observed that mRNA levels of Ca2+/calmodulin (CaM)-dependent protein kinase kinase β (CaMKK2), an additional upstream kinase of AMPK, were increased immediately after 6 h of sleep deprivation and that carnitine palmitoyltransferase 1 (CPT1), a signaling factor downstream of AMPK, was increased during the recovery period after sleep deprivation (Chikahisa et al., 2009). These findings suggest that prolonged wakefulness enhances the activity of central AMPK by increases in the AMP/ATP ratio and/or CaMKK2 expression. Subsequent activation of central AMPK would then cause an enhancement of SWA in NREM sleep (Figure 3). 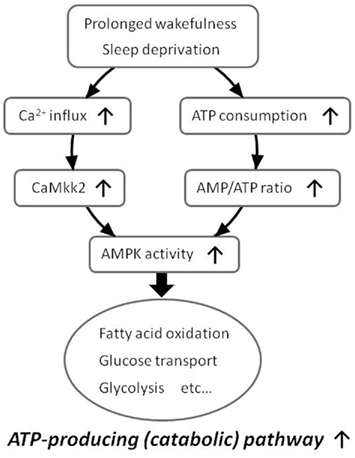 AMP-activated protein kinase is also known to be involved in circadian rhythms, and directly regulates phosphorylation and degradation of cryptochrome 1 (CRY1), a circadian clock component (Lamia et al., 2009). Furthermore, mice with a genetic disruption of the AMPK pathway show an attenuation of circadian rhythms in the expression of several clock genes in the liver (Lamia et al., 2009). Taken together, AMPK plays an important role in linking energy metabolism and the regulation of circadian and sleep homeostasis. Of course, ATP is itself affected by circadian cycles. The ATPase activity of KaiC constitutes the circadian system of cyanobacteria (Terauchi et al., 2007), while ATP release in astrocytes is also regulated by circadian mechanisms (Marpegan et al., 2011). Circadian clock components and ATP modulation of mammalian CNS activity may cross-communicate and constitute a dual mechanism driving the regulation of AMPK as a sensor of cellular energy states.

Due to several advanced studies, an involvement of ATP as an energy source or as a neuromodulator in the regulation of sleep has been identified in the past few years. We now have a better understanding of the functional properties of ATP as a result of individual investigations into the properties of astrocytic, adenosine, and AMPK signaling. However, several questions still remain unanswered. SWA in NREM sleep was recently discovered to be controlled locally in the cortex (Vyazovskiy et al., 2011). Does ATP or its metabolites play a potent physiological role in sleep regulation in the cortex? Does ATP have a role in the connection between hypothalamic and cortical signaling? Further critical research to help understand the pathophysiological mechanisms of sleep disorders and the interaction between sleep impairment and metabolic syndrome is anticipated.

Kalinchuk, A. V., Mccarley, R. W., Porkka-Heiskanen, T., and Basheer, R. (2011). The time course of adenosine, nitric oxide (NO) and inducible NO synthase changes in the brain with sleep loss and their role in the non-rapid eye movement sleep homeostatic cascade. J. Neurochem. 116, 260–272.

Copyright: © 2011 Chikahisa and Séi. This is an open-access article distributed under the terms of the Creative Commons Attribution Non Commercial License, which permits non-commercial use, distribution, and reproduction in other forums, provided the original authors and source are credited.