Efficacy of zolpidem for dystonia: a study among different subtypes

Although there are some newly developed options to treat dystonia, its medical treatment is not always satisfactory. Zolpidem, an imidazopyridine agonist with a high affinity on benzodiazepine subtype receptor BZ1 (ω1), was found to improve clinical symptoms of dystonia in a limited number of case reports. To investigate what subtype of dystonia is responsive to the therapy, we conducted an open label study to assess the efficacy of zolpidem (5–20 mg) in 34 patients suffering from miscellaneous types of dystonia using the Burke–Fahn–Marsden Dystonia Rating Scale (BFMDRS). Patients were entered into the study if they had been refractory to other medications as evaluated by BFMDRS (no change in the previous two successive visits). After zolpidem therapy, the scores in the patients as a whole were decreased from 7.2 ± 7.9 to 5.5 ± 5.0 (P = 0.042). Patients with generalized dystonia, Meige syndrome/blepharospasm, and hand dystonia improved in the scale by 27.8, 17.8, and 31.0%, respectively, whereas no improvement was found in cervical dystonia patients. Overall response rate among patients were comparable to that of trihexyphenidyl. Zolpidem may be a therapeutic option for generalized dystonia, Meige syndrome, and hand dystonia including musician’s. Drowsiness was the dose-limiting factor.

Dystonia is a syndrome of sustained muscle contractions causing twisting and repetitive movements or abnormal postures (Fahn et al., 1998). Although there are several options to treat dystonia, its medical treatment is notoriously difficult and often unsuccessful. Zolpidem, an imidazopyridine agonist with a high affinity to benzodiazepine subtype receptor BZ1 (ω1; Holm and Goa, 2000), is reported to improve basal ganglia disease including Parkinson’s disease (Daniele et al., 1997) and various types of dystonia (Evidente, 2002; Garretto et al., 2004; An et al., 2008; Park et al., 2009) Despite these case reports, zolpidem has not been tested in a large number of patients with various subtypes of dystonia. Here we report two dystonia patients who improved remarkably by oral zolpidem therapy, and assessed treatment outcome of zolpidem in 34 medically intractable patients suffering from miscellaneous types of dystonia, in order to determine what subtypes of dystonia are good candidates for zolpidem trial.

Dystonia patients were selected, not in randomized, nor controlled design, from those seen at Tokushima University Hospital and Takeda General Hospital, Japan. The diagnosis of primary dystonia was made according to standard criteria (Albanese et al., 2006): Major exclusion criteria were the presence of brain lesion in basal ganglia detected by 1.5 T magnetic resonance image and the past history of antipsychotics administration. We enrolled 34 patients with dystonia, who were treated with trihexyphenidyl (4–12 mg/day), clonazepam (0.5–3 mg/day), baclofen (15–60 mg/day), and others (9 generalized dystonia; 10 Meige syndrome/blepharospasm; 7 cervical dystonia; 8 hand dystonia). All patients were refractory to further dose increases of oral medications other than zolpidem. Their doses were unchanged if continued in the zolpidem trial. Of all, 23 patients were resistant to botulinum toxin type A (OnabotulinumtoxinA: 50–200 IU, 0.5–8 ml) injections. The refractoriness was evidenced by the lack of improvement in the Burke–Fahn–Marsden Dystonia Rating Scale (BFMDRS) in the last two visits. All focal dystonia patients (Meige syndrome/blepharospasm, cervical dystonia, and hand dystonia) did not spread to multiple body parts during 1 year follow up. One patient underwent palidal stimulation before entry. Their clinical characteristics are summarized in Table 1. Their mean age was 48.8 ± 15.8 years; mean disease duration was 5.2 ± 5.1 years. Zolpidem was started at 10 mg/day (once a day in the evening), later increased or decreased in dosage (5–20 mg/day: once or twice a day in the morning and evening) depending on the tolerability and the benefit. The mean dosage of zolpidem was 11.2 ± 5.12 mg.

All patients were assessed before and 1 month after zolpidem administration using BFMDRS, including the Dystonia Movement Scale (Part I) and Disability Scale (Part II; Burke et al., 1985).

This study was approved by JSPS Grants-in-Aid for Scientific Research (No. 21390269), and informed consent was obtained from all patients.

Statistical analyses were made using t-test, results were considered significant at a level of P < 0.05.

A 36-years-old man, who was a clarinet player, had 1-year history of cramps during the performance. His physical condition and mental condition was normal, and there were no neurologic abnormalities. At the age 35, he noticed an abnormal cramp on the left little finger during clarinet performance. The symptoms gradually worsened over time, finally he became no longer able to play the clarinet in the concert. He had been on medications with trihexyphenidyl up to 12 mg/day and clonazepam (1–3 mg/day) with no benefits.

At the age of 36-years-old, we tried zolpidem on him, which improved his symptoms dramatically to the extent that he had no problems in the performance. He took 10 mg of zolpidem before playing the clarinet, and found the beneficial effect within 30 min, its durations of action being about 3 h. One year later, he was still using zolpidem 10 mg once or twice a day for occasional concert.

A-20-years-old woman, who was a softball player, had 1-year history for lower limbs dystonia. Her physical condition and mental condition was normal, and there were no neurologic abnormalities except for dystonic symptoms on the bilateral lower limbs. At the age 19, she noticed an abnormal inversion of the left ankle during walking. The symptoms gradually worsened, and she developed difficulty in walking because of her lower limbs muscle hyperactivity. Her dystonic symptoms did not change with or without shoes. She was tried medication with trihexyphenidyl (up to 12 mg/day), baclofen (up to 30 mg/day), and gabapentin, with no effect. At age 20, she became unable to walk, or to bend her knees and ankles. She was referred to us with a diagnosis of lower limb dystonia (Figure 1). 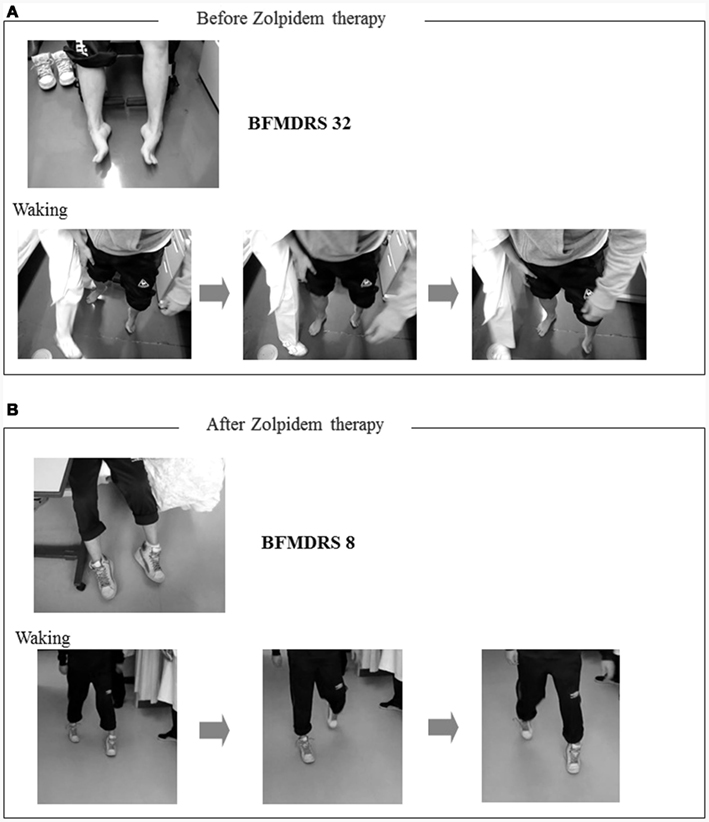 Figure 1. (A) It is before treatment. She could not walk without help because of left dominant lower limbs dystonic spasm. (B) We started zolpidem 20 mg/day monotherapy, and at the day 14, she could walk without any support, despite the persisting inversion of the left ankle.

We treated her with zolpidem oral monotherapy with a dose up to 20 mg/day. Three days after the therapy, she found it easy to bend her right knee and could stand without any help. She could walk on day 7, and finally she could climb up and down stairs on day 14. One year later, she was still on zolpidem, with continued benefit.

Effects of zolpidem in miscellaneous types of dystonia

Here we described the outcome of zolpidem trial in patients with miscellaneous types of dystonia, whose symptoms had been refractory to other medications. In all dystonia patients, 24% of the patients responded to zolpidem, and remarkable improvements were found particularly in generalized and hand dystonias. No improvement was found in cervical dystonia. Despite the different outcome measures and clinical protocols, the present data are comparable to the efficacy of trihexyphenidyl in a previous study reporting improvements in 44% for generalized dystonia patients, 63% for Meige syndrome/blepharospasm, and 28% for focal dystonia patients (Jabbari et al., 1989).

Our result has a limitation that the design was not a randomized controlled trial. Indeed this is a pivotal study so that the conclusion regarding efficacy of zolpidem should be cautious and other studies are needed to replicate our results, It is however unlikely that the beneficial effects are entirely placebo-based, because the patients had been equally tried on other medications with no benefit before enrollment. Moreover, improvement in the scale of the whole patients was significant. We therefore consider that zolpidem is a useful option for treating dystonia.

It was reported that some of adult onset primary focal dystonia patients spread proximally or contralaterally or become generalized within several years of symptom onset (Weiss et al., 2006). For that reason, we assessed all patients using BFMDRS, one of the major clinical dystonia scales for generalized dystonia, in this study. It would be desirable to evaluate on the scale suitable for each types of dystonia in future trials, with divided subtypes, being randomized, blinded, and placebo-controlled.

For the patients with generalized dystonia, Meige syndrome/blepharospasm, and hand dystonia, mild to remarkable improvements (29–75% improvement in BFMDRS) were observed, whereas no significant changes were found for cervical dystonia after zolpidem (Figure 2). Despite the small number of cases, blepharospasm was also refractory. Even within the same subtype, responsiveness to zolpidem considerably varied among patients.

We used zolpidem 5–20 mg/day for the patients with dystonia, and drowsiness was tolerated for most of the subjects. Eight out of 34 subjects complained relatively persistent drowsiness (3 cases of responders and 5 of non-responders). No correlation between drowsiness and effects to dystonia syndrome was found. It is however possible that doses used in this study may not be large enough to obtain the maximal benefit, because the previous studies used the doses up to 50–70 mg/day (Garretto et al., 2004; Young et al., 2008).

Focal hand dystonia (writer’s cramp and other occupational cramps) is a primary dystonia produced by the excessive co-contraction of antagonistic muscles of the hand and forearm (Sheehy and Marsden, 1982). In our study, 38% of the hand dystonia patients improved after zolpidem. In past study, botulinum toxin treatment of hand dystonia showed less favorable benefits than cervical dystonia or blepharospasm (Karp et al., 1994). Musicians’ cramp or dystonia of other highly skilled performance are even more difficult to obtain the satisfactory outcome. Zolpidem is worth being tried on such patients as Case 1 in our study.

Zolpidem is an imidazopyridine agonist with a high affinity on the benzodiazepine site of GABAA receptors containing α1 subunit in combination with β2 and γ2 subunits (McKernan and Whiting, 1996; Sanna et al., 2002), equivalent to ω1 subtypes, present in interneurons in all brain areas including the hippocampus, the cortex, and the cerebellar Purkinje cells (McKernan and Whiting, 1996). Recently a high density of zolpidem binding sites was found in the thalamus (Licata et al., 2009) and the subthalamic nucleus (Chen et al., 2007), and possibly the globus pallidus (Duncan et al., 1995; Chen et al., 2004). After binding to these sites, zolpidem could enhance inhibitory pathways in the basal ganglia motor loop, accounting for the clinical improvement in dystonia.

Lack of responsiveness in cervical dystonia is unexplained in the present study. Intriguingly, the clinical improvement in cervical dystonia after globus pallidus internus deep brain stimulation (GPi-DBS) was reported to be less satisfactory than other subtypes (Starr et al., 2006; Lee et al., 2007). It might be possible that GPi-DBS and zolpidem could have similar mechanisms of action.

In conclusion, zolpidem may be a useful option for treating generalized/hand dystonias, and Meige syndrome who do not respond to botulinum toxin or oral medications.

This study was supported by JSPS Grants-in-Aid for Scientific Research (No. 21390269). We thank the patients and their families for participating in this study.

Copyright: © 2012 Miyazaki, Sako, Asanuma, Izumi, Miki and Kaji. This is an open-access article distributed under the terms of the Creative Commons Attribution Non Commercial License, which permits non-commercial use, distribution, and reproduction in other forums, provided the original authors and source are credited.