A 58-year-old Thai male with hypertension and previous ischemic stroke 4 months earlier, developed a sudden onset of right-sided weakness and was unable to speak 2 h prior to hospital arrival. His blood pressure was well controlled (<140/90 mmHg) with amlodipine 5 mg/day before and after his previous ischemic stroke. Aspirin 81 mg and simvastatin 20 mg/day were given after previous stroke. At the emergency room, his blood pressure was 158/89 mmHg and pulse was 82 beats per minute (regular) with regular heart rate and rhythm. There were no cardiac murmurs on auscultation. The patient was alert but had global aphasia with forced eye deviation to the left. Right facial weakness (upper motor neurons), right hemiplegia, right hypoanesthesia, and right homonymous hemianopia were found. The NIH Stroke Scale (NIHSS) was 20. Complete blood cell count, coagulation profile, plasma level of glucose, electrolytes, renal and liver function tests were normal. An electrocardiogram demonstrated normal sinus rhythm with a rate of 80 beats per minute. Non-contrast computed tomography (CT) scan of the head demonstrated no evidence of acute ischemic or hemorrhagic stroke (Figure 1). The diagnosis of acute left MCA infarction was made and cardiogenic embolism was highly suspected. Patient’s magnetic resonance imaging (MRI) and magnetic resonance angiography (MRA) performed after the previous stoke 4 months earlier were reviewed and demonstrated infarction in both cerebellar hemispheres and right parietal deep white matter area. Multiple microbleeds were also noted predominantly at basal ganglia, thalamus, and cerebellum, bilaterally (Figure 2). Despite the microbleeds on the previous MRI, the stroke neurologist felt that there was no absolute contraindication for intravenous (IV) thrombolysis. Therefore, IV tissue plasminogen activator was given 140 min after stroke onset. Computed tomography angiography (CTA) and perfusion study (CTP) were subsequently performed 1 h after thrombolysis treatment initiation. CTP showed a delayed time to peak (TTP) and mean transit time (MTT) with preservation of cerebral blood volume (CBV) at the left parieto-occipital region, which is likely to indicate the presence of ischemic penumbra. However, no significant stenosis of MCA was found on CTA thus mechanical thrombectomy was not performed. Standard post-IV thrombolysis care protocol, including close blood pressure monitoring, was carried out. Patient continued to have right hemiplegia and global aphasia with a NIHSS of 20. A non-contrast CT scan of the brain 24 h after thrombolysis revealed a hematoma at the left cerebellum with perilesional edema and multiple foci of hyperdense lesion at right cerebellum, superior frontal gyrus, and left temporal lobe consistent with hemorrhagic transformation (parenchymal hematoma type 2) (5) (Figure 3). Patient symptoms worsened between 24 and 48 h post-IV thrombolysis, he was stuporous and NIHSS progressed from 20 to 22. Repeated CT brain 3 days after thrombolytic treatment showed worsening of the left cerebellar edema. Patient underwent a median suboccipital craniectomy and hematoma evacuation and thereafter his condition resulted as clinically stable without evidence of brainstem compression. As part of the protocol for the etiologic diagnosis of stroke, a transthoracic echocardiogram (TTE) was performed revealing a large (55 mm × 25 mm) mobile, lobulated, heterogeneous echoic mass with scattered calcification attached to interatrial septum with in and out protrusion of the mitral annular plane. A highly mobile component at the surface of left atrial mass was also present. Findings were consistent with both left atrial myxoma and superimposed thrombus (Figure 4). After discussion of the clinical case, informed consent was given by the patient’s family to surgically remove the atrial myxoma. Pathological examination confirmed the diagnosis of myxoma. There was a piece of gelatinous tissue (4 cm × 2.5 cm × 0.8 cm) attached to a part of tumor stalk. Histopathological examination revealed that the tumor extended into the venous channel on underlying myocardium. The resection margin was free of tumor (Figure 5) and after 31 days of admission, the patient was discharged to return home. At time of discharge, he still had right hemiplegia and global aphasia, NIHSS was 16, Barthel index 0, and the modified Rankin Scale (mRS) 5. After 6 months, his clinical condition was significantly improved, including gait and speech. NIHSS was 7, Barthel index 25, and mRS 4. At 9 months, the patient was able to engage in walking without assistance, the NIHSS was 5, Barthel index 65, and mRS 3. 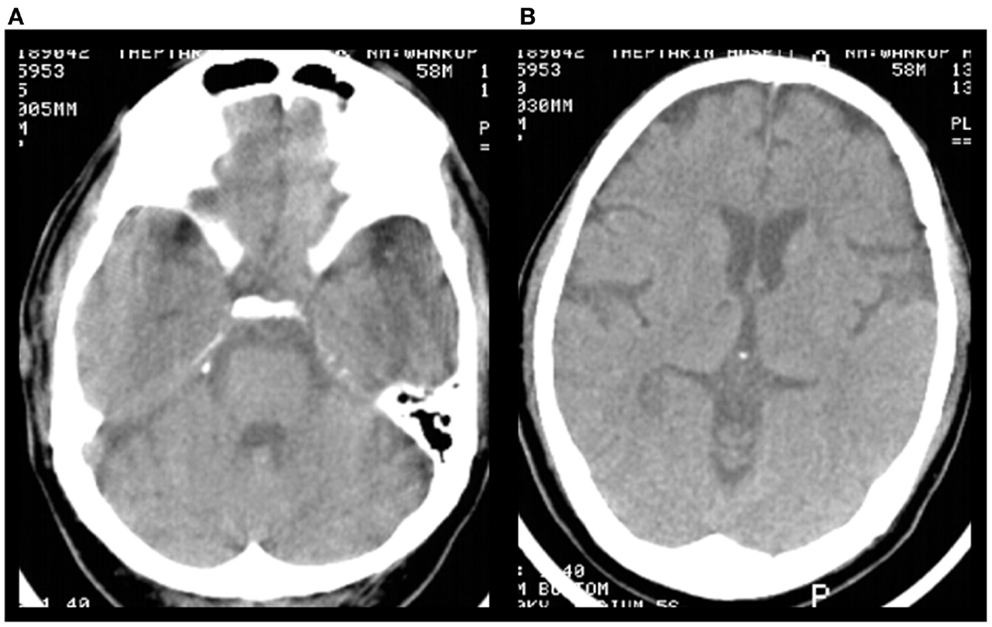 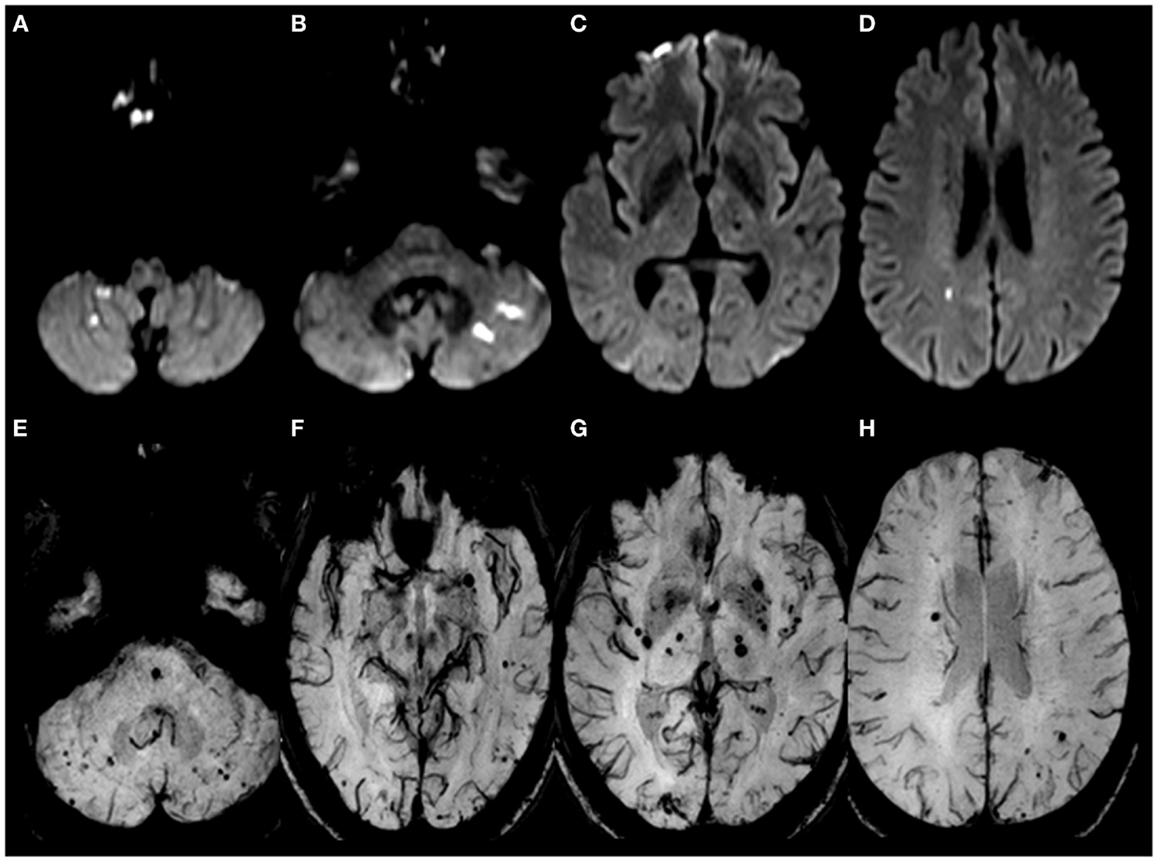 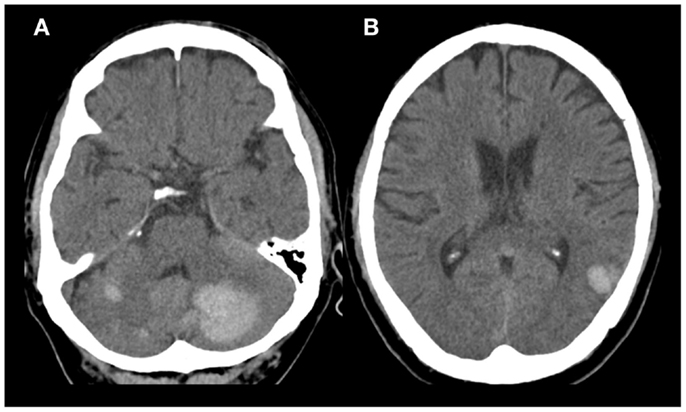 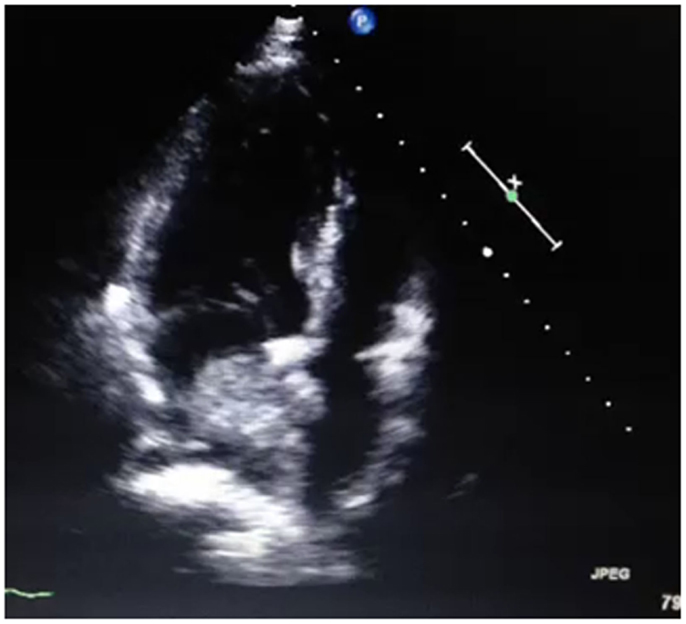 Figure 4. Transthoracic echocardiogram findings. A large (55 mm × 25 mm) mobile and lobulated heterogeneous echogenic mass with scatter calcification attached to interatrial septum and in and out protrusion of mitral annular plane, highly mobile with thrombus on top. Findings were consistent with left atrial myxoma with superimposed thrombus. 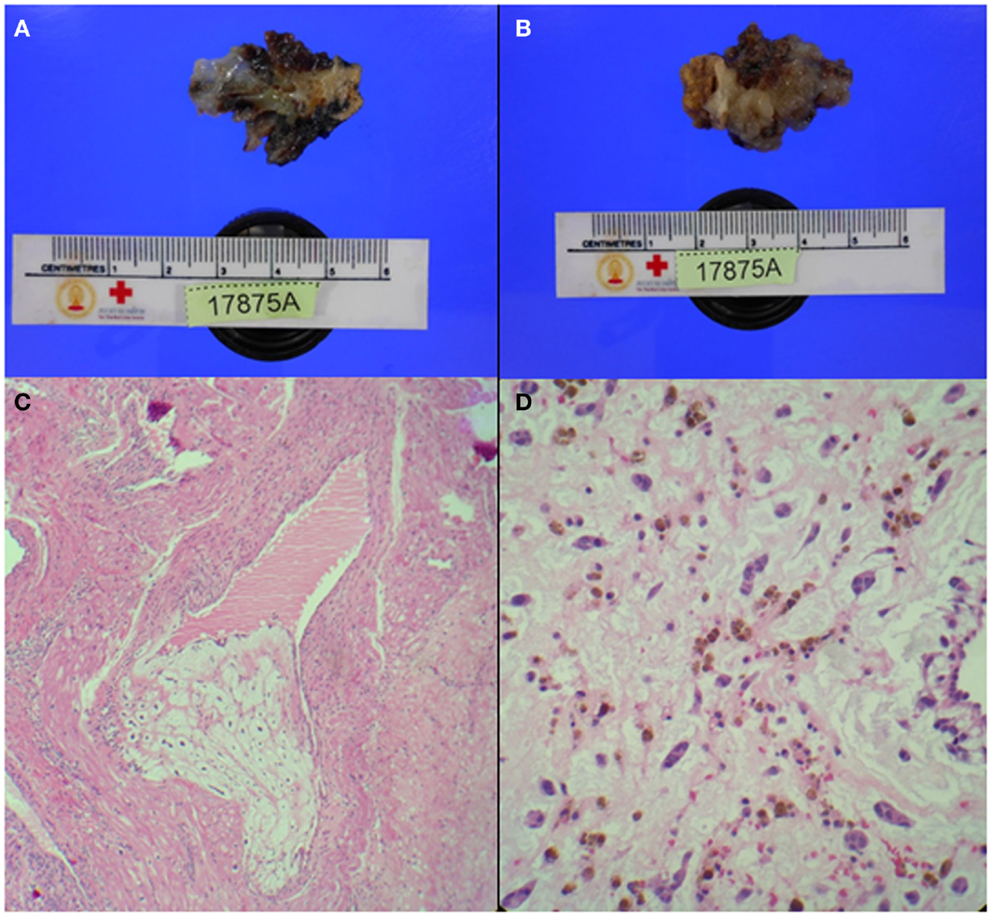 Atrial myxoma is a rare cause of stroke. Cerebral embolism leading to ischemic stroke, aneurysmal formation, and myxomatous metastasis are common neurological complications. In this case report, we found that multiple microbleeds and recurrent territorial infarction can be associated with the presence of as atrial myxoma. To our knowledge, there is only one report of microbleeds as a complication of atrial myxoma (12). Pathological findings of the brain in patients with atrial myxoma are generally consistent with multiple infarctions. Aneurysmal formation and pseudoaneurysms can be found at the site of vascular occlusion. It has been proposed that tumor cells may infiltrate cerebral vessels via vasa vasorum and subsequently proliferate in the vessel wall, leading to a weakening of the internal elastic lamina and aneurysmal formation. This process is similar to the mechanism underlying the formation of mycotic aneurysms. Sometimes, rupturing of the three layers of the arterial wall occurs and pseudoanerysms are formed. These pseudoaneurysms generally grow faster than the true aneurysm itself and can result in hemorrhage. Microembolism has also been demonstrated in the retina of patients with atrial myxoma (13). We proposed that small myxoma particles, which embolize and lodge in the small vessels in the brain may lead to formation of microbleeds.

The third and possibly the most important point in this patient is the risk of bleeding after thrombolysis in patients with myxoma and cerebral microbleeds. Embolized myxoma particles generally lodge in brain arteries and proliferate in the vessel wall. Pseudoaneurysm and aneurysm formation in the small arteries may be more vulnerable to thrombolysis induced ICH. There were nine reports of patients, including ours, with acute ischemic stroke due to cardiac myxoma who received IV thrombolysis (3, 4, 14–19) (Table 1). All patients developed ischemic stroke in the MCA territory and received IV thrombolysis within 3 h after stroke onset. Three out of nine patients, including our patient, developed ICH after IV thrombolysis. Bleeding was found located in the cerebellum and parietal lobe. Our patient was the only case with reported evidence of multiple cerebral microbleeds on MRI. Other authors did not report any data on microbleeds. Among these case reports, most patients, including ours, improved after thrombolysis and had a good clinical outcome. Due to the invasive nature of embolized myxomatous material in the cerebral vessel, special precaution should be taken with IV thrombolysis in patients with a diagnosis of atrial myxoma, especially in those with evidence of cerebral microbleeds.

We propose that in case of involvement of several arterial territories, physicians should consider cardioembolic stroke in the differential diagnosis and continue aggressive work up, to adopt the most appropriate therapeutic strategies and prevent recurrent stroke. Ischemic stroke patients with cerebral microbleeds and atrial myxoma may have an increased risk of bleeding from IV thrombolysis.

Copyright: © 2014 Chutinet, Roongpiboonsopit and Suwanwela. This is an open-access article distributed under the terms of the Creative Commons Attribution License (CC BY). The use, distribution or reproduction in other forums is permitted, provided the original author(s) or licensor are credited and that the original publication in this journal is cited, in accordance with accepted academic practice. No use, distribution or reproduction is permitted which does not comply with these terms.

Recanalization and Reperfusion Therapies of Acute Ischemic Stroke: What Have We Learned, Where Are We With Still Unanswered Questions, and Where Are We Headed?