Objective: To evaluate whether fatigue improvement might be directly linked to improved depression and day-time sleepiness.

Methods: Patients were assessed regarding fatigue, depression, and day-time sleepiness. The relation between changes of the two latter symptoms and changes in fatigue was analyzed.

Conclusion: Our findings highlight the importance of patient-reported outcomes in identifying potential benefits of drug treatment beyond its well-established effects on disease activity and disability progression.

Fatigue is defined as an extreme form of exhaustion with obvious negative effects on quality of life. With a prevalence ranging between 53 and 95% (1, 2), it is the most frequent “hidden symptom” in multiple sclerosis (MS). Often, fatigue symptoms force individuals to substantially reduce their workload or to even quit their occupation completely. There is evidence that MS-fatigue is strongly related to depression and sleep disorders (3, 4) although the underlying pathophysiological processes are still not completely understood. From the patient’s perspective, these factors are of particular importance in the context of the overall burden of the disease. However, effective symptomatic treatment specifically for fatigue is still missing, leaving the patient with feelings of helplessness, and the physician unsatisfied.

Patients suffering from obvious fatigue symptoms are often treated with antidepressants, most likely efficacious, partly due to the strong association between depression and fatigue. Further, modafinil, amantadine, and aminopyridine are known as treatment options although the therapeutic efficacy is still a matter of debate.

In terms of MS disease-modifying drugs (DMTs), there are no conclusive data available regarding their efficacy on fatigue symptoms. Studies using first generation DMTs, e.g., interferon (IFN) and glatiramer acetate (GA) have yielded divergent results (5–8) while two recent publications on the impact of natalizumab on fatigue (9, 10) showed significant improvement of symptoms after a 1- and 2-year follow-up period, respectively.

In the prospective, multicentre, open-label, observational phase IV TYNERGY study, patients with relapsing-remitting MS (RRMS) who were naïve to natalizumab treatment at baseline experienced improvement in MS-related fatigue (primary efficacy endpoint) over 1 year of treatment (10). The present data analysis was focused especially on the question whether the amount of fatigue improvement was directly linked to improvements in depression and day-time sleepiness.

Eligible patients were prescribed natalizumab according to national guidelines, were 18–65 years old (inclusive) at screening, and presented with at least mild fatigue {as determined by the Fatigue Scale for Motor and Cognitive Functions [FSMC (11)] sum score of ≥43; see Table 1}. Patients who had no symptoms of fatigue (i.e., had an FSMC total score <43 at baseline), had an Expanded Disability Status Scale (EDSS) score ≥6.0, were receiving amphetamine medication, or had major depression (assessed by clinical interview of the patient and review of the medical records) were excluded from the study. 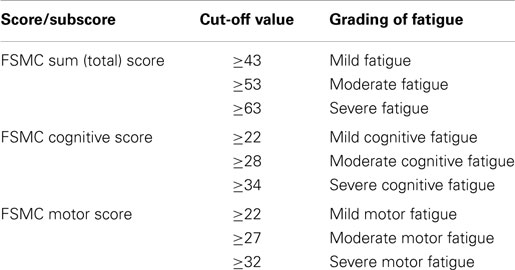 The intent-to-treat population (ITT) included all enrolled patients (N = 195). A total of 31 withdrawals occurred over the trial period, leaving 164 patients who completed the trial. More than two-thirds of the 195 patients were female (71.3%) (Table 2). At baseline, the average age was 39.7 years, and the average duration of MS was 8.8 years. The median EDSS score at baseline was 3.0, and two-thirds of the patients experienced a relapse within 6 months prior to the baseline visit. Most patients (86%) had previously received disease-modifying therapy; a third of the patients (31%) had received interferon (IFN) beta in the month prior to inclusion in TYNERGY.

The study was conducted in compliance with Good Clinical Practices (GCP) and the Declaration of Helsinki, and was approved by the institutional ethical review board at the University Hospital of Northern Sweden, Umeå. Consecutive patients prescribed natalizumab at the participating centers gave their written, informed consent to enter the study after the therapy decision was made.

The TYNERGY study used a one-armed trial design to primarily evaluate the change in fatigue after 1 year of natalizumab treatment with a well-defined and validated instrument, the FSMC, designed for use in MS patients. Cut-off values for the clinical categories mild, moderate, and severe MS-related fatigue are shown in Table 1.

Besides fatigue, other important aspects that may have an important effect on functioning and well being of MS patients were assessed at baseline, at month 6, and at month 12. They were: work capacity (assessed by the Capacity for Work Questionnaire – CWQ), health related quality of life (HRQoL), sleepiness, depression, cognitive impairment (assessed by the Symbol Digit Modalities Test – SDMT, and the Paced Auditory Serial Addition Test – PASAT), walking speed, MS disease disability, and overall activity using a step counter that was worn for 7 days the week before the study visit.

The DMTs used prior to initialization of natalizumab were documented. All concomitant medications taken during the trial were recorded and special attention was paid to change in symptomatic fatigue therapy, e.g., modafinil and amantadine. Information on relapses, adverse events (AEs), and serious adverse events (SAEs) were collected.

Results have been described in detail elsewhere (10).

Fatigue was assessed by the FSMC, a validated 20-item questionnaire specifically developed for MS patients. The FSMC allows separate evaluation of motor and cognitive fatigue and clinical grading of fatigue severity.

Depression was measured by the Center for Epidemiologic Studies Depression Scale (CES-D). The CES-D is a short self-report scale designed to measure depressive symptomatology in the general population. It consists of 20 questions and scores ranging from 0 to 60: a score <15, no depression; A score 15–21, mild-to-moderate depression; A score >21, possibility of major depression.

Statistical analyses were based on pooled datasets from all participating countries. All statistical tests were two-sided with a 5% level of significance unless otherwise stated. Fatigue was classified as mild, moderate, or severe, according to the FSMC score cut-off values listed in Table 1. On the basis of FSMC scores at 1 year, patients were categorized into three groups:

All statistical analysis and programing were done using SAS v9.2. 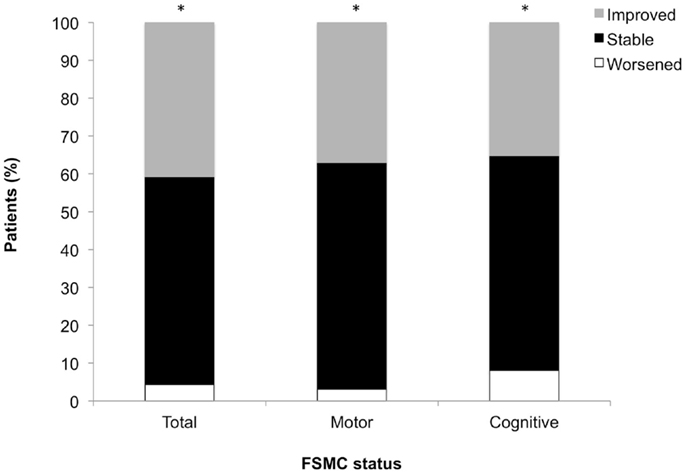 Changes in Depression and Association with Changes in Fatigue Scores

The proportion of patients with no depression increased by 17%, while proportions of patients mildly to moderately depressed or with potential major depression decreased by 5 and 12%, respectively (Figure 2). CES-D score changes differed among worsened, stable, and improved FSMC total/subscale subgroups (P < 0.01), with greatest improvements in patients with improved FSMC scores (Figure 3). Improved FSMC total, motor, and cognitive scores were associated with improved mood (correlation coefficients = 0.45, 0.39, 0.47, respectively, P < 0.01). 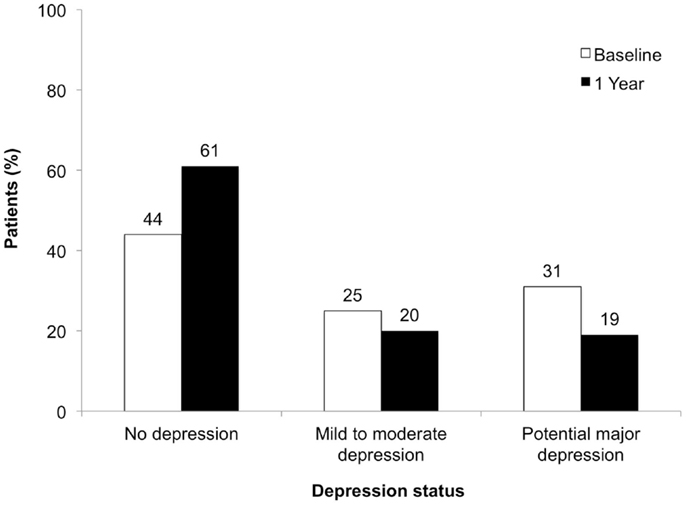 Figure 2. Depression status at baseline and at 1 year of follow-up. 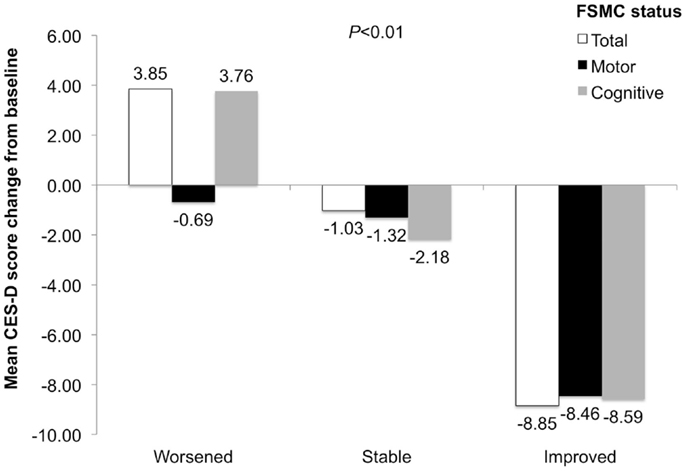 Changes in Sleepiness and Association with Changes in Fatigue Scores 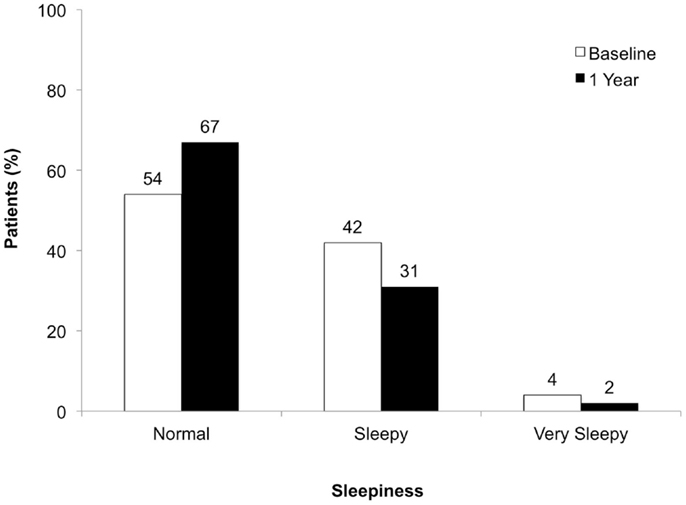 Figure 4. Degree of sleepiness at baseline and at 1 year of follow-up. 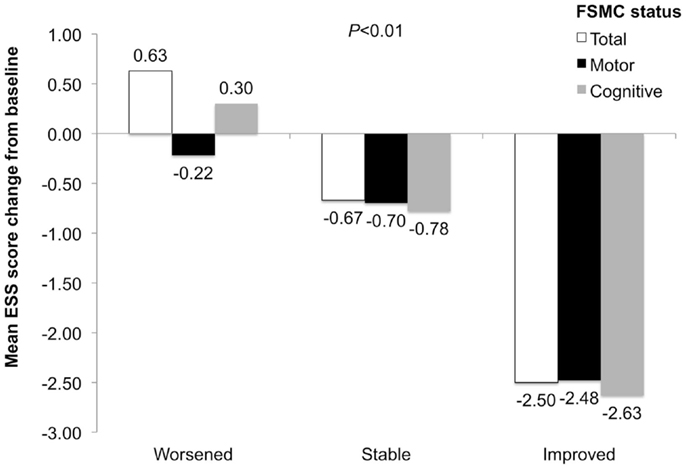 The present data analysis was focused on the association between already reported clinically meaningful changes in MS-fatigue under natalizumab treatment (10) and strongly associated factors such as depression and day-time sleepiness.

Our results clearly demonstrate that natalizumab-treated MS patients in TYNERGY exhibited not only improvements in fatigue but also in depression, and day-time sleepiness from baseline to year 1. Measures of total, motor, and cognitive fatigue were stable or improved in more than 90% of patients, all of whom had at least mild fatigue at baseline. This large beneficial effect on fatigue symptoms is most likely referable to the high anti-inflammatory efficacy of the drug and the lack of specific side-effects, which are discussed to increase fatigue.

Although patients with major depressive disorder were excluded from the study, 56% of patients had some degree of depression at baseline. After 1 year of natalizumab treatment, the proportion of patients categorized as depressed had decreased to 39%. Mean CES-D scores decreased (improved) by as much as 8.85 points from baseline. This absolute change is greater than the six-point difference between the pre-specified categories of mild-to-moderate depression and possible major depression, suggesting that the absolute score changes observed were clinically meaningful.

The proportion of patients with some degree of sleepiness decreased from 46% at baseline to 33% at year 1. In contrast to the change in depressive symptoms, the absolute changes in ESS scores were smaller than the change of at least eight points that would be needed to shift between categories of sleepiness. The reason for this discrepancy remains unclear. One might assume that the mechanisms underlying sleepiness are more specific than those causing depression. For depression and fatigue, some pathophysiological similarities such as disturbed serotonergic neurotransmission have been reported [e.g., Hanley and Van de Kar (12)]. For Fatigue and sleep disorders, we have evidence of an interrelation (13). The underlying processes, however, are still unknown.

We are aware that an observational trial always runs the risk of influence by a placebo effect, when starting a new and more efficient treatment. However, since all scales displayed highly significant improvements with an additional increase over time, this argument is not likely to be major in explaining our results.

Besides these promising results, we are aware of limitations that need to be addressed. First, the TYNERGY trial lacks of a control group showing that the reported effects are purely driven by the drug. At the time of study start, there was no other second-line treatment available and it was regarded as unethical to include a control arm since all patients had high disease activity. Second, we were not able to study a causal relation among fatigue, depression, and sleepiness but only relations or associations. Nonetheless, it is of clinical importance to realize that improved fatigue symptoms are associated with an increase of patients’ well being in terms of decreased levels of depression and sleepiness. Third, our study was primarily focused on patient-reported outcomes since these tools offer insight into patients’ view and feelings. We did not control for important confounders such as cytokine influence, which is known to be modulated by natalizumab (14) nor did we control for concomitant medication influence. Finally, the fact that more than 30% of our patients received IFNs prior to study inclusion might have driven in part the effects documented under natalizumab treatment. However, when controlling for different previous treatments, the effect of natalizumab on fatigue remained stable speaking in favor of a therapeutic effect.

While additional research is needed to elucidate a causal relationship among fatigue, depression, and sleepiness in MS, these findings from TYNERGY highlight the important role of patient-reported outcomes in identifying potential benefits of natalizumab treatment beyond its well-established effects on disease activity and disability progression.

Copyright: © 2015 Penner, Sivertsdotter, Celius, Fuchs, Schreiber, Berkö and Svenningsson, for the TYNERGY trial investigators. This is an open-access article distributed under the terms of the Creative Commons Attribution License (CC BY). The use, distribution or reproduction in other forums is permitted, provided the original author(s) or licensor are credited and that the original publication in this journal is cited, in accordance with accepted academic practice. No use, distribution or reproduction is permitted which does not comply with these terms.

†Trial investigators are listed in Acknowledgments at the end of the paper.