Background: Patients with essential tremor (ET) seem to be at increased risk of developing Parkinson’s disease (PD). Surprisingly, little has been written about this clinical entity, ET-PD. Cognitive dysfunction is a well-known feature of PD, and can also be an issue in patients with ET. Whether the presence of the combined diagnosis, ET-PD, is associated with additive cognitive effects as compared with PD has not been studied.

Conclusion: The combined diagnosis, ET-PD, seemed to be associated with additive cognitive effects as compared with PD alone.

Despite this association, surprisingly, little has been written about this clinical entity, “ET-PD,” with only two small case series [n = 22 (2), n = 53 (3)], both based on retrospective chart review. The cognitive features of this combination disorder have not been studied, as prior reports focused on tremor and other motor features.

Cognitive dysfunction is a well-known feature of PD (4). Recent work indicates that cognitive dysfunction may also be an issue in patients with ET (5), although data are limited. The types of cognitive deficits are not dissimilar in the two disorders, with executive dysfunction and deficits in memory being prominent (5). Whether the presence of the combined diagnosis is associated with additive cognitive effects is not known, but seems plausible.

As part of a prospective, clinical–epidemiological study, we performed a standardized, structured clinical evaluation of 30 ET-PD patients, comparing them to 53 age-matched PD patients. As part of that evaluation, patients underwent several cognitive screens. The goal of these analyses was to compare the cognitive performance in these two patient groups, with the a priori hypothesis that ET-PD patients would have poorer performance than their counterparts with PD alone.

Participants were enrolled in a clinical–epidemiological study of movement disorders at the Neurological Institute, Columbia University Medical Center (CUMC) (2009–2014) (6). The study assessed the role of environmental toxins in disease etiology; it also evaluated a wide range of clinical features across movement disorders. ET-PD and PD patients seen in the most recent 5 years were identified from a computerized billing database at the Center for Parkinson’s Disease and Other Movement Disorders at the Institute. Each patient had received a diagnosis of PD or ET-PD from their treating neurologist at the Institute. One of the authors (Elan D. Louis) reviewed the office records of identified patients; those with diagnoses of or physical signs consistent with other movement disorders were excluded. During the review, the most recent Hoehn and Yahr score (7), daily dose (milligrams) of levodopa, and other data were recorded.

During the initial enrollment telephone call, the 10-min Telephone Interview for Cognitive Status [TICS, score = 0–41 (no impairment)] was administered to all participants (8), although no participants were excluded based on their score. An in-person clinical assessment was then performed, during which a trained research assistant administered a series of structured questionnaires, which elicited data on (1) demographic variables, (2) general medical health (Cumulative Illness Rating Scale score (9) [range = 0–42 (maximum)], total number of prescription medications), (3) disease duration (e.g., duration of first motor symptoms in PD and duration of initial action tremor in ET-PD), (4) medication use [taking medication to treat tremor (yes vs. no)], and (5) additional variables of interest (e.g., age of symptom onset). The Center for Epidemiological Studies Depression Scale (CESD-10) was also administered; this is a self-report, 10-item screening questionnaire for depressive symptoms [range = 0–30 (greater depressive symptoms)] (10). To further evaluate cognition, the research assistant administered the Folstein Mini-Mental State Examination [MMSE, range 0–30 (no impairment) (11)].

A videotaped neurological examination was performed on ET-PD patients. This included one test for postural tremor and five for kinetic tremor (e.g., pouring, drinking) performed with each arm (12 tests total). A neurologist specializing in movement disorders (Elan D. Louis) used a reliable and valid clinical rating scale, the Washington Heights-Inwood Genetic Study of ET (WHIGET) tremor rating scale, to rate postural and kinetic tremor during each test: (0–3). These ratings resulted in a total tremor score (range = 0–36).

Each patient had received a diagnosis of PD or ET-PD from their treating movement disorders neurologist at the Institute. In addition, based on office record review, the diagnosis of PD was confirmed (Elan D. Louis) prior to enrollment using published diagnostic criteria, which required the presence of at least two cardinal signs (12). The diagnosis of ET-PD was further reviewed prior to enrollment, and required that (1) the ET diagnosis was present for at least 5 years prior to the PD diagnosis, (2) the initial ET was characterized by moderate or greater amplitude kinetic tremor in the absence of any signs of PD (e.g., rest tremor, bradykinesia), and (3) the initial ET diagnosis occurred in absence of red flags for possible emerging PD (isolated postural tremor without kinetic tremor, unilateral kinetic tremor).

Data were analyzed in SPSS (Version 21). Demographical and clinical characteristics of ET-PD and PD patients were compared using chi-squared tests, Fisher’s exact tests, Student’s t-tests and, when the variable was not normally distributed, Mann–Whitney tests (Table 1). The MMSE score and the TICS score were not normally distributed (respective Kolmogorov–Smirnov z = 2.17, p < 0.001 and z = 1.53, p = 0.02). Therefore, correlations between these scores and other variables were assessed with Spearman’s correlation coefficients. The MMSE was not normally distributed, even after log transformation and other forms of transformation (squaring, cubing). By contrast, after transformation as follows: log10(41 − TICS score), the TICS score was normally distributed (Kolmogorov–Smirnov z = 1.08, p = 0.19). In a linear regression analysis, we assessed the association between disease duration and transformed TICS score (outcome variable), adjusting for age and education. To explore the possibility of confounding by education, in a linear regression model, we assessed the association between diagnosis and transformed TICS score (outcome variable), adjusting for years education. 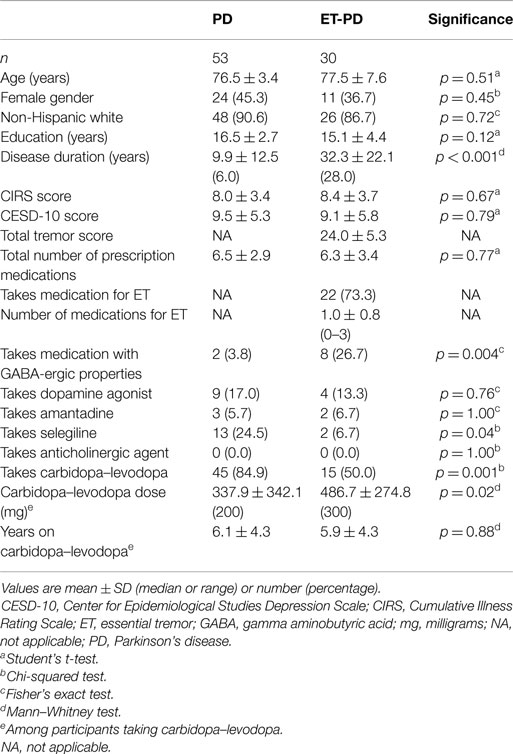 Parkinson’s disease and ET-PD patients were similar in age, gender, race, and education (Table 1). As expected, disease duration was longer in ET-PD than PD. The two groups were similar in terms of CIRS score, CESD-10 score, and total number of prescription medications (Table 1). A higher proportion of PD than ET-PD patients was taking carbidopa–levodopa, although the daily dose (miiligrams) of levodopa was higher in ET-PD (Table 1). A higher proportion of ET-PD than PD patients were taking medications with gamma aminobutyric acid (GABA)-ergic properties (e.g., primidone, benzodiazepines). The Hoehn and Yahr score was I or II in 85% of cases. 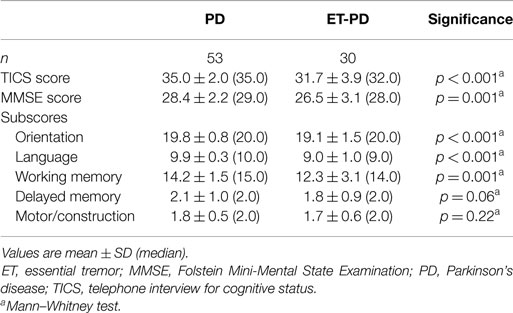 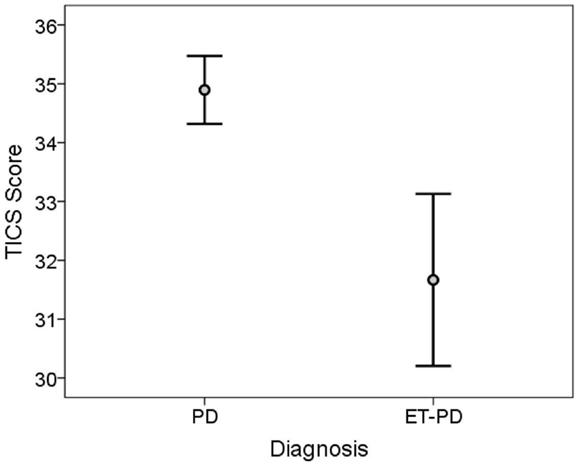 Figure 1. TICS score in ET-PD vs. PD. The central circles represent means and the bars represent the 95% confidence intervals. 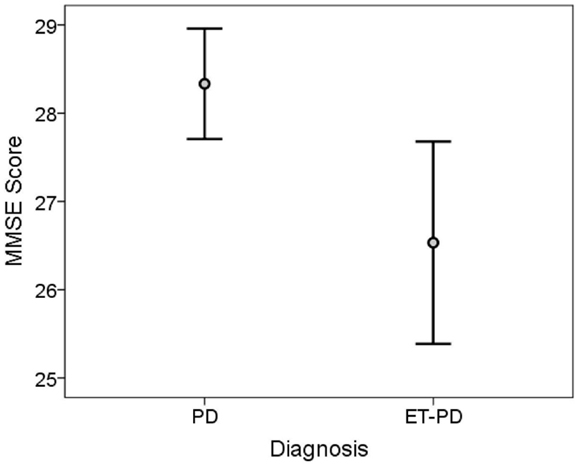 Figure 2. MMSE score in ET-PD vs. PD. The central circles represent means and the bars represent the 95% confidence intervals. 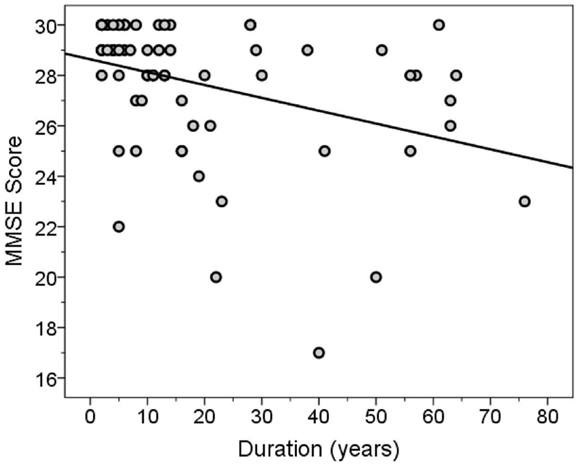 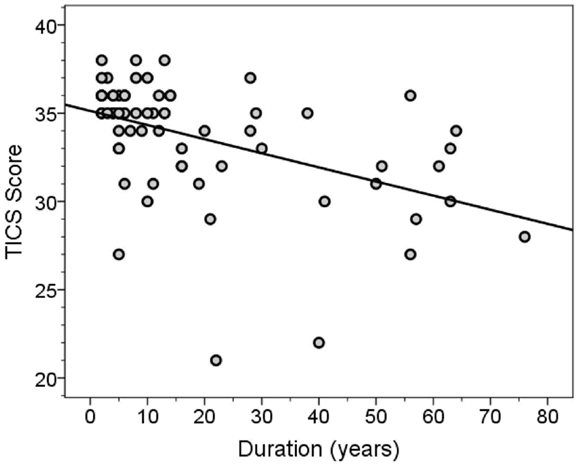 Years of education in ET-PD patients was 15.1 ± 4.4 vs. 16.5 ± 2.7 in PD patients (p = 0.12, Table 1). To explore the possibility of confounding by education, in a linear regression model, we assessed the association between diagnosis and transformed TICS score (outcome variable), adjusting for years education. In that model, the transformed TICS score remained lower ET-PD than PD patients (β = 0.16, p < 0.001), even after adjusting for years of education. A similar linear regression model, examining the association between MMSE and diagnosis, was not possible because the MMSE was not normally distributed.

As part of a prospective, clinical–epidemiological study, ET-PD and PD patients underwent two tests of global cognition and we tested the a priori hypothesis that ET-PD patients would have poorer performance than their counterparts with PD alone. The data, which showed that performance on both cognitive tests was poorer in ET-PD than in PD, supported this hypothesis. That is, the presence of the combined diagnosis seemed to be associated with additive cognitive effects. The difference between the two patient groups was apparent with two distinct cognitive tests, thereby providing construct validity for the results.

These data have a number of clinical implications. The first is that patients with the combined diagnosis may be more likely to experience cognitive difficulty than those with PD alone, and clinicians should be sensitive to this issue. The second implication is that it is possible that this subgroup of patients (i.e., ET-PD) is at greater risk of developing dementia. These data; however, do not directly address this question.

The ET-PD group performed more poorly in several domains (orientation, language, working memory, and marginally in delayed memory). This observed mixture of differences does not simply reflect a greater degree of subcortically driven deficits in the ET-PD group, but also reveals greater impairment in abilities more typically affected by cortical conditions such as Alzheimer’s disease (13). More comprehensive neuropsychological testing is needed to examine the potentially heterogeneous combination of processes that contribute to the cognitive performance issues in patients with the combined diagnosis.

The ET-PD patients had a longer duration of symptoms than the PD patients, as one would have expected – they had had ET for a minimum of 5 years prior to the onset of PD. When we matched the two groups based on duration of symptoms, the difference in cognitive test scores persisted, indicating that symptom duration was not a confounding factor. We did not collect data on duration of PD per se; however, the number of years on carbidopa–levodopa did not differ between the ET-PD and PD groups, suggesting that the duration of PD was likely to have been similar in the two groups.

This study should be interpreted within the context of several limitations. First, cognition was evaluated using two brief, global screening instruments rather than a detailed neuropsychological test battery. Despite this limitation, several significant differences were evident; a more detailed cognitive assessment would likely reveal additional differences. Second, the study was designed prior to the widespread use of the Montreal Cognitive Assessment, which is more sensitive to deficits in executive function, and it would be useful in future studies to employ this cognitive screen as well. Finally, we did not collect data on the ON or OFF state of patients and could not assess the potential influence of current motor state on test performance.

This study had several strengths. It is the first to address this particular research question and this specific a priori hypothesis, thereby adding another unique data element to our understanding of cognition in ET. Second, a standardized assessment was performed on all study participants by a research worker who was blinded to the a priori study hypothesis. Third, participants were enrolled prospectively, thereby avoiding the issue of incomplete data inherent in a retrospective chart review.

In summary, the performance on both cognitive tests and several test subscores was poorer in patients with ET-PD than in PD. That is, the presence of the combined diagnosis, ET-PD, seemed to be associated with additive cognitive effects.

Funding: National Institutes of Health: NINDS R01 NS039422 and NINDS R01 NS086736. This funding body played no role in the design of the study, the collection, analysis, and interpretation of data, or the writing of the manuscript.

Copyright: © 2015 Louis, Rohl, Collins and Cosentino. This is an open-access article distributed under the terms of the Creative Commons Attribution License (CC BY). The use, distribution or reproduction in other forums is permitted, provided the original author(s) or licensor are credited and that the original publication in this journal is cited, in accordance with accepted academic practice. No use, distribution or reproduction is permitted which does not comply with these terms.