Background: Cerebral autosomal-dominant arteriopathy with subcortical infarcts and leukoencephalopathy (CADASIL) is the most common genetic cause of stroke. In addition to ischemic stroke, CADASIL predisposes to development of cerebral microbleeds (CMB). CMB and hypertension are known to be associated with intracerebral hemorrhage (ICH). The purpose of this study was to analyze the relationships among CMB, hypertension, and ICH in CADASIL.

Cerebral autosomal-dominant arteriopathy with subcortical infarcts and leukoencephalopathy (CADASIL) is the most common genetic cause of stroke. In addition to ischemic stroke, CADASIL predisposes to development of cerebral microbleeds (CMB) (1–3). CMB are well-defined MRI-demonstrable brain lesions consisting of tiny perivascular hemosiderin deposits, detectable using T2*-weighted gradient echo or susceptibility-weighted imaging (SWI) (4). CMB are associated with hypertension, cerebral amyloid angiopathy (CAA), and chronic kidney disease (5). CMB are also associated with intracerebral hemorrhage (ICH), which accounts for 20–30% of stroke in Asian countries such as Korea and Japan (6). Hypertension and CAA are the most common causes of ICH, and CAA is known to be associated with apolipoprotein E (ApoE)-ε4 genotype (7).

The presence of hemorrhagic phenomena in CADASIL creates clinical concerns, including potential use of antithrombotic treatments. In the current study, we investigated hemorrhagic complications of CADASIL. We analyzed the relationships among hypertension, CMB, and ICH, as well as the roles of other vascular factors including ApoE genotype. We hypothesized that hypertension and CMB would be independently associated with ICH, known to occur in 12–25% of East-Asian CADASIL patients (8–10). We also hypothesized that CMB would colocalize with ICH.

We studied consecutive patients diagnosed with CADASIL by mutation of NOTCH3 gene (11) at Jeju National University Hospital’s Neurology Department (Korea) between March 2012 and February 2015. Asymptomatic as well as symptomatic patients were included in the study. This study was carried out in accordance with the recommendations of and approved by the Institutional Review Board of Jeju National University Hospital. All subjects gave written informed consent in accordance with the Declaration of Helsinki.

Symptomatic patients had been diagnosed with CADASIL based on CADASIL symptoms (ischemia or hemorrhagic episode, cognitive impairment, chronic headache, and/or seizure). Asymptomatic patients had at least one symptomatic family member. Vascular risk factors were recorded in all patients. Hypertension was defined as blood pressure >140/90 mm Hg on more than one occasion or use of antihypertensive agent. Diabetes mellitus was defined as fasting glucose level ≥126 mg/dl, PP2 test level ≥200 mg/dl, or use of anti-diabetes medication. Hypercholesterolemia was defined as total serum cholesterol level >240 mg/dl. In addition, a medication history, including use of platelet medications, was taken on the day of examination. ApoE genotype was determined in all patients (12).

One experienced neuroradiologist (Ho Kyu Lee), blinded to clinical data, reviewed all MRI and rated definite CMB presence, number, and distribution on SWI using the Microbleed Anatomical Rating Scale (MARS) (13). He read 50 brain MRI twice, 1 week apart, and the intrarater reliabilities (Kappa statistic, intraclass correlation coefficient) were calculated for presence, tertiles, and number of CMB. In MARS, definite CMB were defined as small, rounded or circular, well-defined hypodense lesions within brain parenchyma with clear margins ranging from 2 to 10 mm in size on T2*-weighted images, and locations of CMB were classified into deep, lobar, and infratentorial categories. CMB mimics were carefully excluded using all available images. ICH was defined as spontaneous non-traumatic bleeding into the brain parenchyma without secondary causes. It was diagnosed on the basis of neuroimaging (CT images at symptomatic ICH onset or MR images at examination including SWI, T1WI, T2WI, and FLAIR) by one neuroradiologist (Ho Kyu Lee) and confirmed by a second neuroradiologist (David Floriolli). Asymptomatic ICH was defined as MRI (including SWI, T1WI, T2WI, and FLAIR) documented hemorrhage without associated symptoms. Data were analyzed using SPSS statistical software (version 20.0). Variables in Table 1 (all dichotomous except age, education, SBP, and DBP) with a p-value < 0.2 on simple regression analysis were considered as potential independent variables to determine whether or not hypertension or other factors were associated with the presence of CMB and whether or not hypertension, CMB tertile, or other factors were associated with the presence of ICH. Stepwise backward logistic regression of variables was performed to obtain a final model of significant (p < 0.05) independent variables. CMB count, not normally distributed, was categorized according to tertiles and an ordinal logistic regression was also performed. 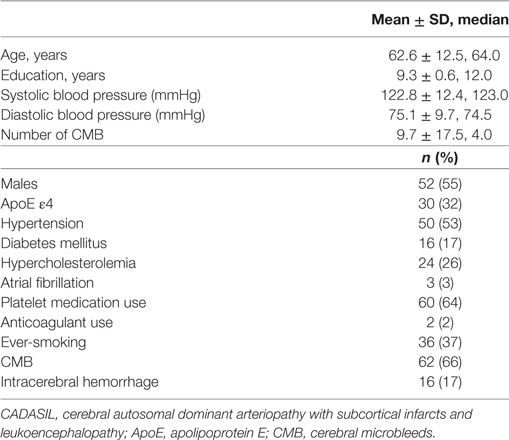 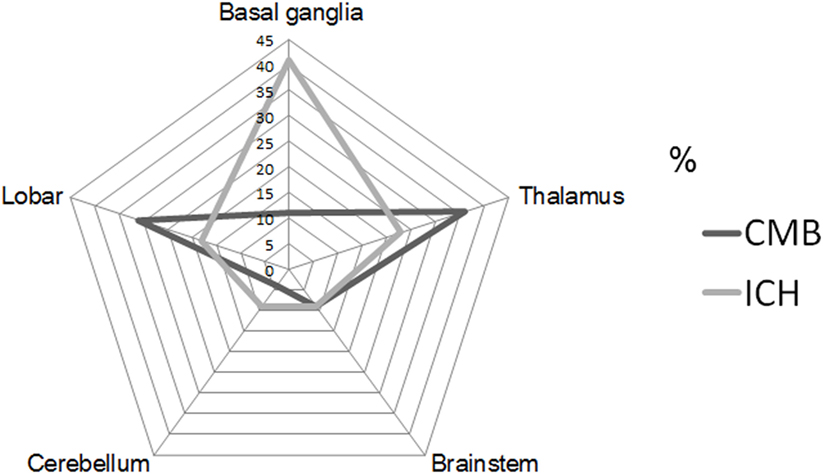 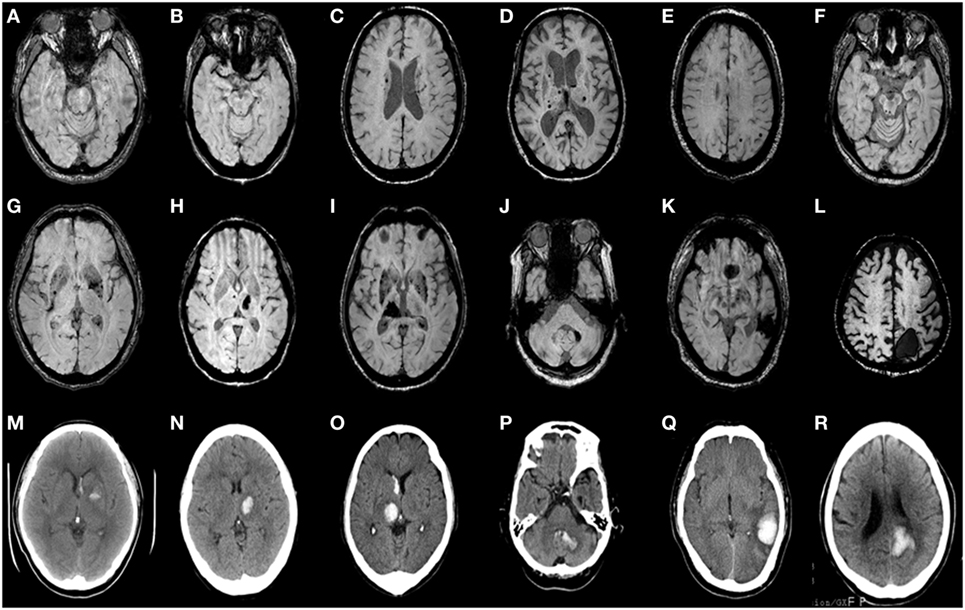 Table 2. Simple logistic regression odds ratios and 95% confidence intervals for presence of CMB and for ICH in 94 patients with CADASIL.† 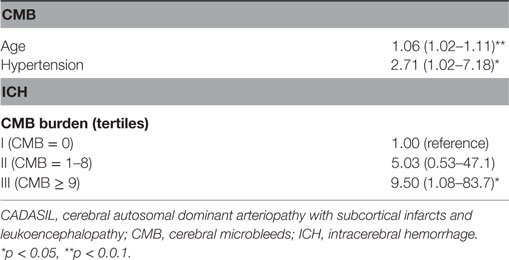 Table 3. Multiple logistic regression odds ratios and 95% confidence intervals for significant factors relating to the presence of CMB and ICH in 94 patients with CADASIL.

We observed that hypertension was independently associated with the presence of CMB (p = 0.045). This is in line with earlier studies (14, 15). In this study, we used MARS and SWI, which are known to increase the number and presence of CMB detected (16, 17). We observed excellent intrarater reliability for number of CMB, and prior work has shown excellent inter-rater reliability for CMB on SWI using MARS (18). Also, our results are consistent with a recent meta-analysis showing significant correlation between hypertension and CMB in patients with stroke and in a healthy population (19).

In the present study, we show that age was associated with the presence of CMB. Recent studies of the relationship between age and presence of CMB in CADASIL have produced conflicting results (2, 3, 14, 15). However, pathological analysis has shown that cerebral microhemorrhages are common in aging brain, regardless of presence of hypertension or CAA (20). Moreover, CMB increases with age for all locations in a general population (21), and age may be compounded by important vascular comorbidities for development of CMB (22, 23). Both CADASIL and hypertension have important effects on arteriolar function, with both processes targeting vascular smooth muscle cells (5).

We found that CMB burden (≥9) was independently associated with the presence of ICH (p = 0.043). CMB may predict subsequent recurrent ICH in patients with previous lobar ICH (4, 18, 26). In addition, recent meta-studies have shown that CMB burden (≥10) on pretreatment MRI increases the risk of post-thrombolysis ICH during IV thrombolysis (27). Our findings are consistent with these observations suggesting that CMB burden predisposes to ICH.

There was a mismatch between the most common site of CMB and ICH in CADASIL in our study. The most common site of CMB was thalamus, followed by lobar, and basal ganglia. However, the most common site of ICH was basal ganglia, followed by thalamus, and lobar area. Because the presence of ICH may mask the presence of CMB, the topographic incongruence of CMB and ICH requires careful interpretation. However, the majority of the patients with CMB (47/62, 76%) had no ICH. The explanation for this mismatch is unclear. We recently proposed a “two site” model of CMB and ICH, in which the specific vascular sites for development of CMB and ICH are different (5). In both CADASIL and hypertension, (arteriolar) smooth muscle cells and blood–brain barrier are targeted; the former has been suggested as site for ICH and the latter a site for CMB (5). While the findings of the current study are consistent with this model, further mechanistic investigations are needed to confirm the observation.

Specific strengths of this study include the relatively large number of homogeneous CADASIL population (mostly R544C mutation), inclusion of ApoE genotype, and application of advanced MRI (including SWI). Our study has several limitations. First, the R544C mutation was predominant; however, genotype–phenotype differences in CADASIL are not known (28). Second, this was a cross-sectional study, and prospective studies are needed to elucidate our findings. Third, we limited our observations to hemorrhagic features and did not investigate other manifestations of small vessel disease such as white matter hyperintensities and small deep infarctions. Fourth, we did not compare our findings to those of a non-CADASIL (e.g., CAA) or a non-Asian cohort, so we cannot address whether our findings are unique for our population group. Fifth, as some asymptomatic patients were likely not identified, selection bias remains a possibility. Finally, while there was a topographical mismatch between CMB and ICH, presence of ICH may obscure presence of CMB.

Our results provide insights into interactions of CMB, hypertension, and ICH in patients with CADASIL. These findings are consistent with a model of hemorrhagic complications in CADASIL in which hypertension predisposes to CMB, which in turn predisposes to ICH. However, this scenario requires confirmation in longitudinal clinical investigations. The topographic incongruence of CMB and ICH is currently unexplained, but is consistent with a model of differing vascular sites for CMB and ICH in CADASIL. Overall, these findings indicate that interactions between CMB, hypertension, and ICH in CADASIL are complex and will benefit from intense mechanistic investigations.

Conception and design of the study: JL and MF. Acquisition of data: JL, KK, J-HO, and JP. Analysis of data: JL, HL, DF, AP-H, and MF. Drafting a significant portion of the manuscript: JL and MF.

Copyright: © 2017 Lee, Ko, Oh, Park, Lee, Floriolli, Paganini-Hill and Fisher. This is an open-access article distributed under the terms of the Creative Commons Attribution License (CC BY). The use, distribution or reproduction in other forums is permitted, provided the original author(s) or licensor are credited and that the original publication in this journal is cited, in accordance with accepted academic practice. No use, distribution or reproduction is permitted which does not comply with these terms.