Leptomeningeal carcinomatosis (LC) is found in around 4% of patients with non-small cell lung cancer (NSCLC). The most common radiological finding of LC is diffuse leptomeningeal enhancement on contrast-enhanced brain magnetic resonance imaging (MRI). Herein, we report a novel brain MRI finding—non-enhanced, band-like, symmetric restricted diffusion along the anterior surface of the brainstem—of LC in four patients with NSCLC. We also identified three additional cases with similar MRI findings in a literature review. We hypothesized that the restricted diffusion along the anterior brainstem was caused by malignant cells concentrating in the cistern around the brainstem and infiltrating into the circumferential perforating arteries along the anterior brainstem surface, which then resulted in microinfarctions.

Leptomeningeal carcinomatosis (LC) is found in around 4% of patients with non-small cell lung cancer (NSCLC), and it is associated with a median survival of only 5 months (1). Although diffuse leptomeningeal enhancement in contrast-enhanced brain magnetic resonance imaging (MRI) is the most sensitive and non-invasive diagnostic tool for LC, false-negative, or non-specific brain MRI findings have been reported in 30% of patients (2). Herein, we report a novel brain MRI finding in four patients with NSCLC and LC, and discuss the findings of a literature review. 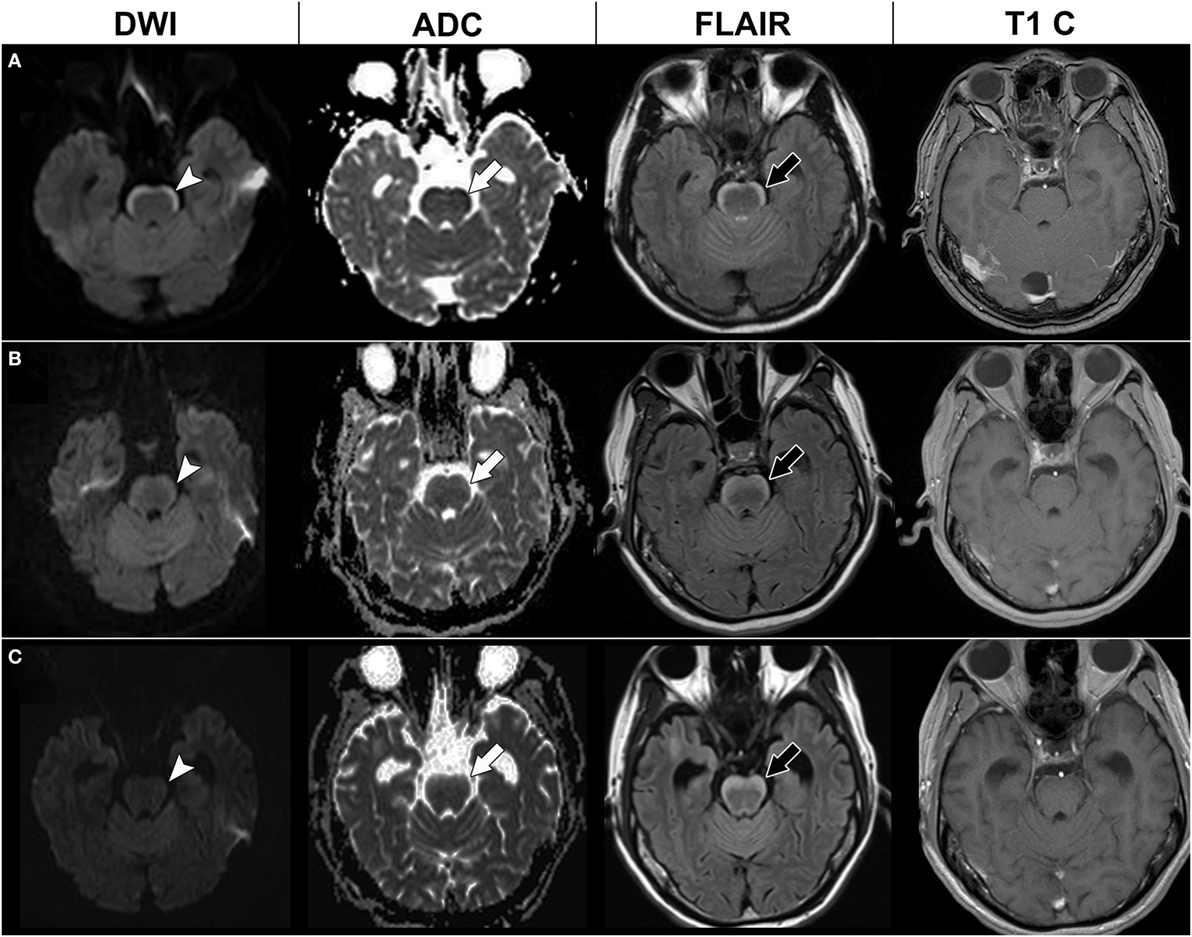 Our initial diagnosis was paraneoplastic brainstem encephalitis. Intravenous steroids and intravenous immunoglobulin were given in September 2012; however, his dizziness and ataxic gait did not improve. Under the further suspicion of LC, intrathecal chemotherapy with cytarabine and methotrexate was administered, with gefitinib being shifted to erlotinib in November 2012. Follow-up brain MRI after 3 months showed persistent hyperintensity on FLAIR imaging but regression of restricted diffusion of the anterior brainstem lesions (Figure 1). However, he experienced progressive general weakness in the following months, and finally died of septic shock in August 2013.

Summary of Other Cases

Three other cases with similar brain MRI findings were identified retrospectively in our hospital (Table 1). The age of the three cases ranged from 41 to 81 years, and included two females and one male. The brief histories of these three cases are described below. 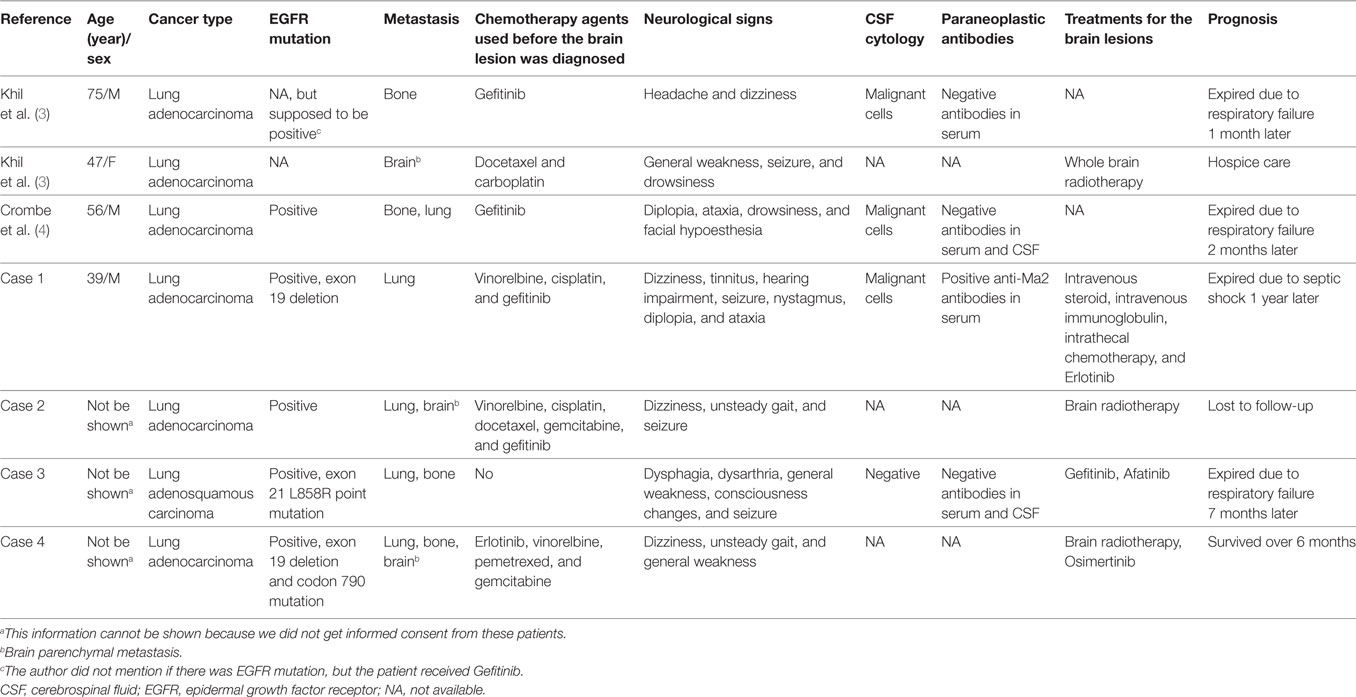 Table 1. Clinical characteristics of the cases in the literature and our case series. 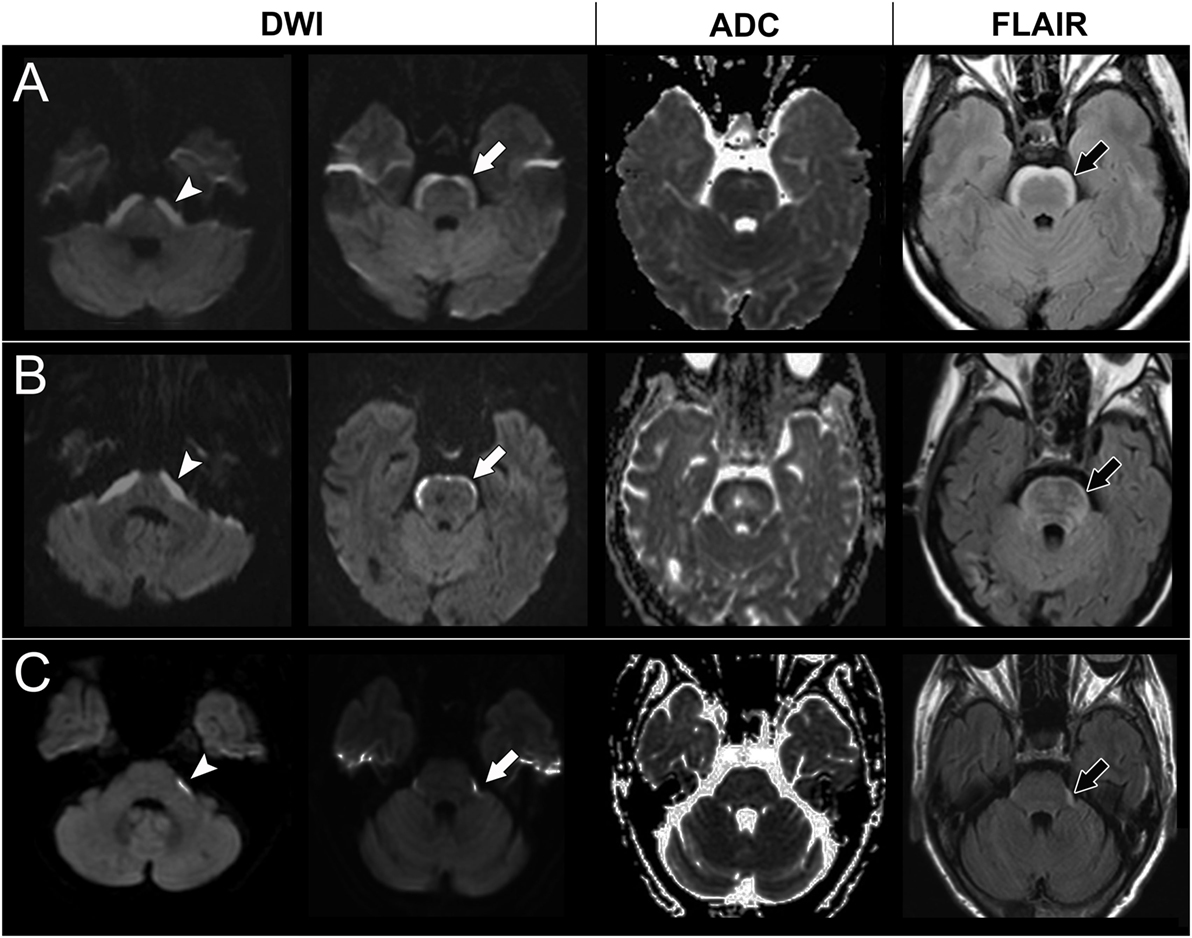 The third case had lung adenocarcinoma with EGFR gene mutations and lung-to-lung and bone metastases. The case received erlotinib, vinorelbine, pemetrexed, and gemcitabine, but the lung cancer still progressed. Two years later, the case suffered from poor appetite, dizziness, general weakness, and unsteady gait. Brain MRI showed numerous enhancing nodules in the bilateral cerebellum and cerebrum, suggesting brain metastasis. The case received whole brain radiotherapy and osimertinib. Follow-up brain MRI showed the disappearance of almost all of the enhancing nodules, but also revealed newly developed restricted diffusion lesions at the anterior brainstem and bilateral corona radiata (Figure 2). However, the clinical condition and lung lesions were stable. The case was kept on osimertinib treatment and was still alive at the time this manuscript was written.

We reviewed the literature and identified three more cases with similar brain MRI findings (3, 4). The clinical characteristics of the seven cases are summarized in Table 1. There were four males and three females, with an average age of 57 years (range 39–81 years). All of the cases had NSCLC, with six having adenocarcinoma and one adenosquamous carcinoma. All had bone, lung, or brain parenchymal metastasis. Five cases had confirmed EGFR gene mutations. The interval between the diagnosis of lung cancer and discovery of the brainstem lesions ranged from 3 months to 4 years. In one patient (case 3), anterior brainstem lesions led to the diagnosis of lung cancer. Five cases had used a thyroxine kinase inhibitor (TKI) before discovery of the brainstem lesions. The associated neurological symptoms included dizziness, unsteady gait, seizures, diplopia, drowsiness, headache, general weakness, facial hypoesthesia, tinnitus, hearing impairment, dysarthria, and dysphagia. Three cases had malignant cells in CSF, and three other cases had brain parenchymal metastasis. One case had positive anti-Ma2 antibodies in their serum. The brain lesions were treated with radiotherapy in three cases, intrathecal chemotherapy in one case, and TKIs in three cases. The case with positive anti-Ma2 antibodies was treated with intravenous steroids and intravenous immunoglobulin; however, the response was poor. The prognosis seemed to be poor in most of the cases, with survival of less than 1 year after identification of the brain lesions.

The most prominent feature of the anterior brainstem lesions on brain MRI in these patients was a high signal on DWI and FLAIR imaging with a corresponding low signal on ADC mapping. This can be described as a “restricted diffusion” pattern, which is thought to represent cytotoxic edema (5). Restricted diffusion develops most commonly in acute ischemic stroke and sometimes in prolonged status epilepticus, mitochondrial disease, or prion disease (5). However, these etiologies were very unlikely in our patients given their clinical presentations and CSF findings. Restricted diffusion has also been reported in high cellular brain tumors such as lymphoma, high-grade glioma, central necrosis of brain abscesses, and some metastases (6). However, these brain tumors often have strong contrast enhancement on brain MRI (6), which was not found in our cases. The CSF cytology and cultures in our cases also did not favor these etiologies.

Considering that all of the patients had lung cancer, other etiologies such as LC, paraneoplastic neurological syndrome (PNS) or chemotherapy-related toxic encephalopathy may explain the brain lesions. Chemotherapy-related toxic encephalopathy was unlikely because different chemotherapy agents or TKIs were given in six cases, and one case was treatment-naive. PNS was also less likely because the brainstem findings did not fit any known PNS. Moreover, only one case had positive anti-Ma2 antibodies, and this case exhibited a poor response to intravenous steroid and intravenous immunoglobulin treatment. Considering that three cases had malignant cells in their CSF and another three cases had brain parenchymal metastasis, LC was the most likely etiology.

The most common brain MRI finding of LC is diffuse leptomeningeal enhancement (2). However, the brain MRI lesions in our patients were non-enhanced. In fact, restricted diffusion has rarely been reported as an imaging finding for LC. Hu et al. reported a 77-year-old female with lung adenocarcinoma who presented with rapidly progressive consciousness changes (7). Her brain MRI showed restricted diffusion along the surface of the bilateral occipital cortex, and since CSF cytology showed malignant cells, LC was suspected. Ayzenberg et al. also reported a 77-year-old male with lung adenocarcinoma who presented with consciousness changes (8). His brain MRI showed restricted diffusion over bilateral cortical and subcortical areas. He fell into a coma and died 5 days later. A postmortem neuropathological examination was consistent with LC, showing extensive tumor cell infiltration as well as microinfarctions due to intracapillary infiltration of tumor cells via Virchow-Robin spaces. We speculate that the anterior brainstem restricted diffusion in our case series may have been caused by malignant cells concentrating in the CSF cistern around the brainstem and then infiltrating into the circumferential perforating arteries along the anterior brainstem surface, thereby resulting in microinfarctions.

Most cases in our series had NSCLC with EGFR mutations, for which survival has been shown to be longer if treated with TKIs; however, the central nervous system was a frequent site of recurrence in these patients (9). The reported median survival after a diagnosis of LC is only a few months (1, 2). In this study, three cases survived for only a few months, two cases had an unknown survival length, one case who received TKIs and intrathecal chemotherapy survived for 1 year, and the other case who received TKIs and brain radiotherapy had survived for more than 6 months when this manuscript was written. Several studies have reported that TKIs with better blood–brain barrier penetration, a higher dosage of TKIs, intrathecal chemotherapy, whole or focal brain radiotherapy, or a combination of multiple treatment strategies may improve the outcome of patients with LC (1, 10).

In conclusion, we reported a novel brain MRI finding with anterior brainstem restricted diffusion in patients with NSCLC. We believe that this is a new imaging finding of LC, and that it may be caused by high cellularity of the tumor cells on the brainstem or microinfarctions due to intracapillary tumor cell infiltration. Because brain MRI is an easily accessible and non-invasive diagnostic tool for LC, the identification of this unique imaging finding could be helpful in diagnosing LC. More case series are warranted and may provide further information about the risk factors and prognosis of patients with this imaging finding. Further studies with a larger number of cases and biopsy or autopsy findings may be able to elucidate the pathological features associated with this imaging finding and support our hypothesis.

This study was approved by the Institutional Review Board of Chang Gung Memorial Hospital. Written informed consent for case 1 has been obtained.

The authors are grateful to the CHEESE study group (Chang Gung Children’s Hospital Study Group for Children with Encephalitis/Encephalopathy-Related Status Epilepticus and Epilepsy, Taiwan) for their technical support.

This research did not receive any specific grant from funding agencies in the public, commercial, or not-for-profit sectors.

Copyright: © 2017 Cheng, Hsu, Tsai, Lin, Huang, Fan, Chin and Huang. This is an open-access article distributed under the terms of the Creative Commons Attribution License (CC BY). The use, distribution or reproduction in other forums is permitted, provided the original author(s) or licensor are credited and that the original publication in this journal is cited, in accordance with accepted academic practice. No use, distribution or reproduction is permitted which does not comply with these terms.