Methods: We evaluated consecutive patients admitted to our hospital with CVT receiving structural imaging from 1991 to 2015. A neuroradiologist, blinded to clinical data, independently reviewed the structural imaging, including head CT and routine MRI for parenchymal lesions and signs of dural venous sinus thrombosis, as well as the MRV/DSA findings. The Clinical and laboratory data were reviewed and recorded for further analysis.

Cerebral venous thrombosis (CVT) is an uncommon but potentially serious and life-threatening cause of stroke, accounting for 0.5–1% of all strokes (1). Since the underlying risk factors and clinical manifestations of CVT are highly diverse which make early diagnosis much difficult, neuroimaging plays a key role in the diagnosis and further treatment (2).

The structural imaging [head computed tomography (CT) and routine brain magnetic resonance imaging (MRI)] can assess any parenchymal lesion secondary to the venous thrombosis and reveal direct signs of intraluminal thrombus (3). As some special MRI sequences, such as susceptibility-weighted images, are used in routine MRI protocols to detect the presence of intraluminal thrombus, many patients can be diagnosed with CVT more rapidly and directly by structural imaging in recent years (4, 5). On the other hand, although the parenchymal lesions are not specific, they could draw attention and prompt a search for direct visualization of a thrombus on MRI or ordering a venography. Therefore, understanding the characteristics of structural imaging for the evaluation of CVT is especially important when CVT is not clinically suspected or magnetic resonance venography (MRV) has not been ordered. In addition, systematic studies investigating structural imaging characteristics in CVT are scarce from China. The aim of the present study is to determine the structural imaging performance on the diagnosis and outcome of CVT in a large number of Chinese patients from a single center.

This was a single-center retrospective hospital-based study. We reviewed our stroke database of all consecutive patients diagnosed as CVT admitted to Peking Union Medical College Hospital between July 1991 and December 2015. All of the patients enrolled in this study had at least one of the following neuroradiological studies to confirm the diagnosis of CVT: CT scan, MRI, MRV, or cerebral angiography, following established diagnostic criteria (3). Of 176 consecutive patients with a diagnosis of CVT,39 without available head CT or brain MRI or with low-quality images were excluded. Given some patients before 2000 might be misdiagnosed due to the limited imaging information, all clinical and neuroimaging records were reviewed by our cerebrovascular group and reconfirmed the diagnosis of CVT. Based on the group review, 20 patients with an equivocal diagnosis were further excluded, leaving 117 patients for analysis in the present study (Figure 1). The ethics committee of Peking Union Medical College Hospital approved the protocol of the study. 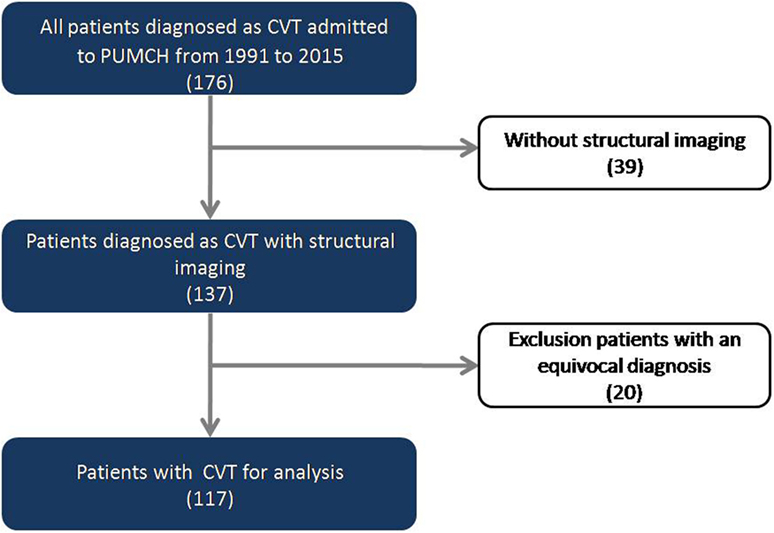 The MRI protocol used in the study routinely includes T1-weighted, T2- weighted, diffusion-weighted images (DWI), non-echo-planar fluid-attenuated inversion recovery (FLAIR), and MRV or cerebral angiography. T2*-weighted gradient echo (GRE) was conducted in some of the patients after 2000. The admission imaging was used for analysis. The initial imaging performed after symptom onset was used in the study if the patients were not admitted to our hospital primarily. Of 117 patients enrolled in the present study, 89 performed MRV and 52 performed cerebral angiographies.

In this study, the parenchymal lesions secondary to CVT on structural imaging were categorized as three subtypes: brain swelling, focal edema, and hemorrhage [parenchymal hemorrhage or subarachnoid hemorrhage (SAH)] (6). Brain swelling was defined as there were no abnormalities in attenuation or signal intensity on structural images, but sulcal effacement, diminished cistern visibility, and a reduction in ventricular size may occur. Focal edema is visible on CT or MR images by focal abnormalities in attenuation or signal intensity without visible hemorrhage, which could be subclassified as either vasogenic edema (with increased ADC values presumably related to venous congestion) or cytotoxic edema (with decreased ADC values related to cellular energy disruption) by DWI techniques. The definition of intraluminal thrombus was the cord sign and the dense sign on plain CT or the empty delta sign on enhance CT scan or abnormal high signal on T1, loss of flow void on T2, loss of flow void or hyperintense signal on FLAIR in the corresponding venous sinus and veins, accompanied by filling defect. In each case, evaluation of all sequences of interest was performed at the same time to reflect usual clinical practice.

A radiologist blinding to clinical information rated all images, including head CT, MRI, MRV, and digital subtraction angiography. The supervisor will further review and confirm the lesions, which were originally doubted.

The continuous demographic data were analyzed using mean ± SD and the discrete data using number and percentage. Differences in proportions were tested with chi-square test or Fisher’s exact test when required. Data analysis was processed on SPSS Statistics Bass 20.0 (SPSS Inc., Chicago, IL, USA). Student’s t-test was used for continuous variables. All P values were two-tailed and criteria for significance were P < 0.05. 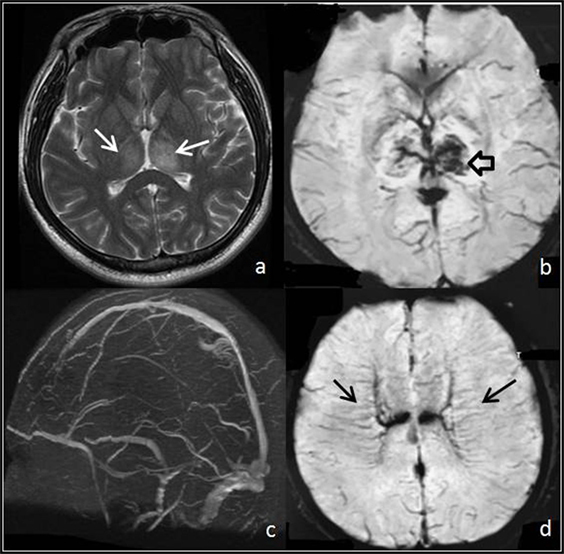 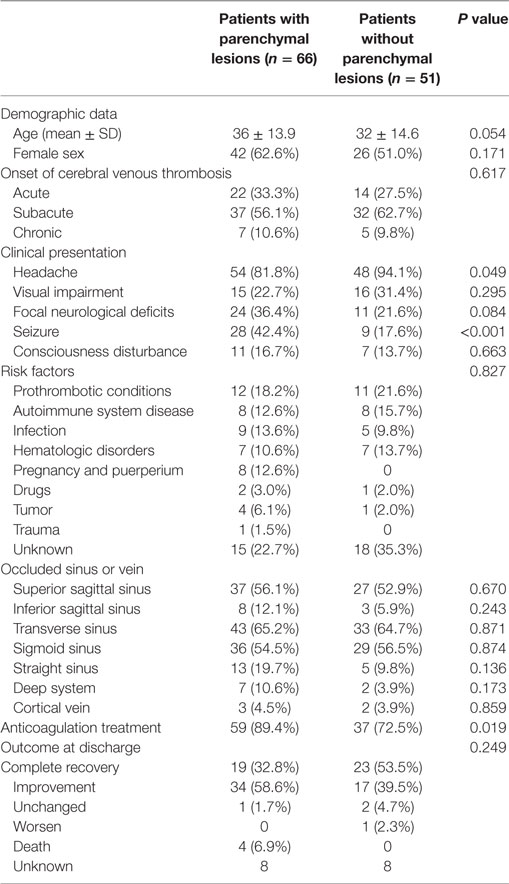 Table 1. The comparison of baseline data, clinical presentation, risk factors and radiological findings of patients with and without parenchymal lesions.

Intraluminal Thrombus in Sinuses or Veins on Structural Imaging 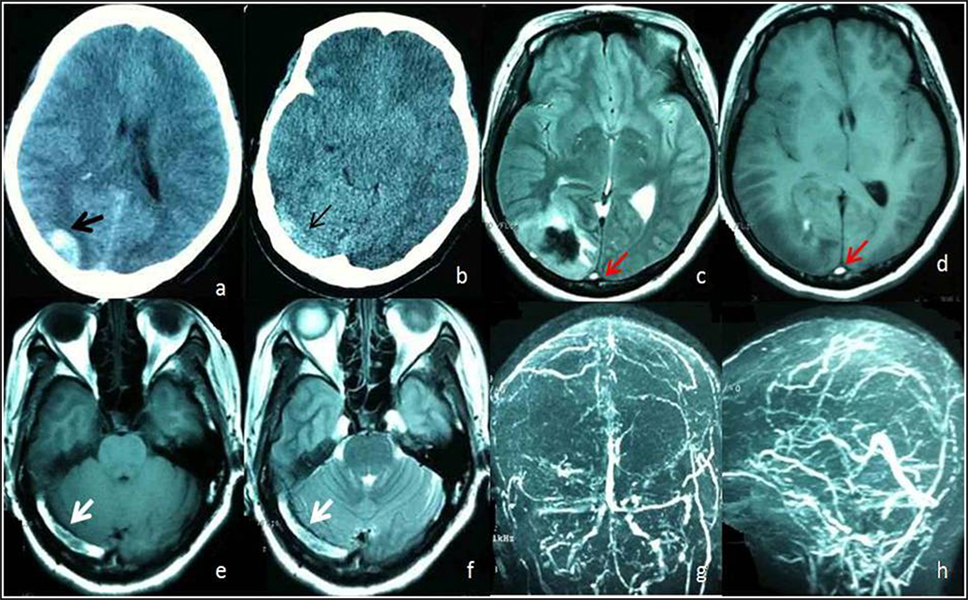 The present study is the first report of the structural imaging findings in a large Chinese CVT cohort. In the present series, the female predominance, age of onset, frequency of onset, and varied clinical manifestations are those classically reported in previous large series of CVT (7). Our finding on mortality at discharge was quite similar to the result of the International Study on Cerebral Vein and Dural Sinus Thrombosis (ISCVT), in which mortality at discharge was only 4.3% (7).

Parenchymal lesions were observed in 56.4% of a total of 117 patients on structural imaging, in line with the previous report (8). However, brain swelling was detected in only 4.3% of the patients in our cohort. Previous studies have reported that brain swelling may occur in as many as 42% of patients with CVT (9). A single center design and the ethnic difference might partly explain the relative low percentage of brain swelling observed in our cohort. An alternative explanation is that potential different parameters among patients would affect the diagnosis even all the imaging were re-evaluated. Finally, the duration between symptoms onset and performance of imaging might affect the visibility of brain swelling. Patients presented with only brain swelling but without parenchymal signal intensity changes tend to have intrasinus pressures in the intermediate range (20–25 mmHg); however, intrasinus pressures could also be markedly elevated (10). Such patients typically have more prominent clinical symptoms than expected based on the imaging findings. Thus, we suggest clinicians and radiologists to promptly identify the brain swelling in the patients with CVT.

Intraluminal Thrombus in Sinuses or Veins on Structural Imaging

In our cohort, only 28.2% (33/117) of the patients were detected with the direct signs of intraluminal thrombus in sinuses or veins on structural imaging. A few recent studies demonstrated that the combination of routine MR sequences had an overall sensitivity of 79%–83% on detecting intraluminal thrombus (5, 13). The lower prevalence of intraluminal thrombus on structural imaging in our study might be related to the variable interval between the onset of thrombus formation and the time of imaging. As we know, the magnetic resonance signal intensity of venous thrombus varies according to the time of imaging from the onset of thrombus formation. In addition, recognition of these direct signs might be challenged due to less knowledge of the different stages of thrombus evolution and pitfalls. Another reason might be that only a small part of patients in our center performed GRE sequences. As GRE sequences are increasingly used to detect the presence of blood breakdown products, their usefulness in depicting intraluminal thrombosis in CVT has been appreciated (14, 15).

In our study, patients with both intraluminal thrombus and parenchymal lesions on structural imaging had significantly more frequent seizures with consciousness disturbance and high percentage of in-hospital mortality, which suggest that these patients have a severe clinical picture and might lead to a devastating or fatal outcome. Thus, the clinicians should be highly alert the early signs of intraluminal thrombus on structural imaging and give the patients early diagnosis and prompt treatment in order to prevent the unfavorable outcome.

Our study had some limitations. First, the retrospective nature of the study resulted in a non-uniform method of neuroimaging studies. Second, given the study was carried out with patients from a single referral center, selected bias might have contributed to the inclusion of more acute-onset and severe cases in the study than would otherwise have been the case. Finally, patients were just followed until hospital discharge, and thus, there were inadequate data to compare the long-term clinical outcome.

This study was supported by Capital Medical Development Research funding of China (No. 2016-1-40117)

Copyright: © 2017 Zhou, Yao, Cui, Li, Zhu, Ni and Peng. This is an open-access article distributed under the terms of the Creative Commons Attribution License (CC BY). The use, distribution or reproduction in other forums is permitted, provided the original author(s) or licensor are credited and that the original publication in this journal is cited, in accordance with accepted academic practice. No use, distribution or reproduction is permitted which does not comply with these terms.