Individuals with FBDS often develop cognitive impairment after seizure onset (2, 6). Both FBDS and the associated cognitive impairment appear to respond to immunotherapies; however, patients typically have residual cognitive impairment post-treatment, predominantly memory problems (7, 8). While these lasting deficits have been linked to persisting structural damage to the hippocampus (3, 8–10), the brain's functional dynamics have not yet been explored. Here, we investigated the hypothesis that functional characteristics of the MTL are related to clinical features of this condition following treatment for FBDS-associated autoimmune encephalitis. Understanding brain mechanisms underlying persistent memory impairment in the convalescent phase of this condition is a critically important step in directing the search for therapeutic options that may mitigate the long-term impact of autoantibody-associated epileptic activity.

Eight treated patients with a presenting clinical diagnosis of autoimmune encephalitis with FBDS participated (Table 1). Treatment of this patient cohort has been reported previously (3). The Addenbrooke's Cognitive Examination-Revised (ACE-R) was administered to patients during the acute phase and on the day of neuroimaging [years since onset: median = 1.1, quartiles(lower,upper) = 0.8, 1.3]. Deficits on the ACER in these patients were dominantly in the memory domain (3). Eight age- and sex-matched healthy volunteers also participated. The protocol was approved by the University of Oxford Central Research Ethics Committee. All subjects gave written informed consent in accordance with the Declaration of Helsinki.

Immediately prior to the scan, subjects were shown four 30 s blocks of eight alternating complex color scenes (landscapes, buildings, or animals) (11, 12), which they were asked to memorize. The same eight images were shown in each block, though the order was randomized. During the subsequent fMRI scan, participants viewed a series of images over twelve 30 s blocks (eight images presented in each). These blocks, separated by 15 s visual fixation, alternated between displaying familiar scenes (i.e., the scenes participants were shown prior to the scan) in a random order each time, or viewing eight of the 48 new scenes (i.e., images they had not seen previously). Animals appeared in 4 of the 8 images (randomly ordered) in each block in both familiar and new conditions. To encourage encoding, participants were asked to indicate with button presses scenes that included animals and were told there would be a recognition test after the scan. Unfortunately, an insufficient number of participants completed the recognition test in a timely manner to enable the resulting data to be analyzed. Only 6/8 of subjects were able to complete the scene-encoding task, due to technical difficulties.

Medial temporal lobe regions of interest (ROIs) for resting-state and task-dependent fMRI analyses included the hippocampus, entorhinal cortex, and parahippocampal gyrus of each hemisphere (Figure 1A), which were derived from a previous study that used a different participant cohort (11). Mean percent signal changes, reflecting increased BOLD activity when viewing new scenes to encode compared to when viewing familiar scenes, were extracted at the single-subject level from the hippocampal ROI (11). 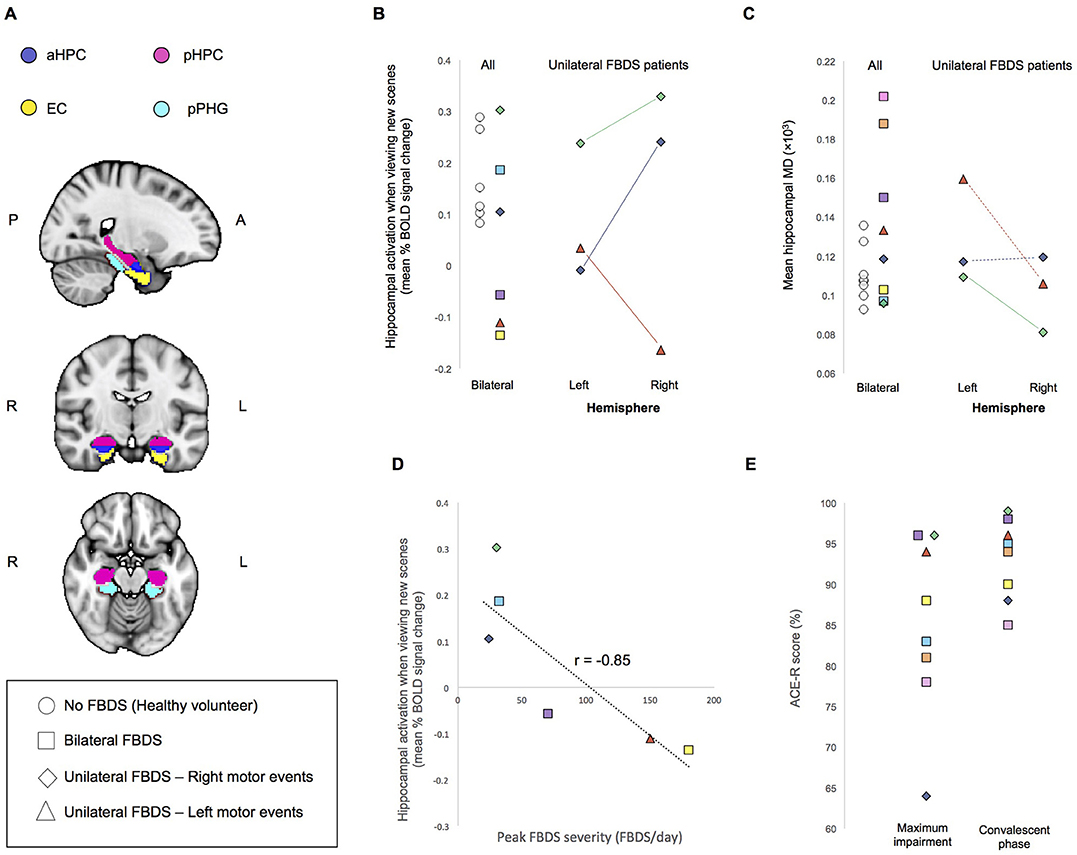 For functional connectivity analyses, we regressed out time-courses from the white matter and cerebrospinal fluid. Using the resting-state data, we investigated the strength of functional connections between hippocampal sub-regions and neighboring MTL cortical areas (entorhinal cortex, parahippocampal gyrus) previously linked to memory impairment in chronic forms of MTL epilepsy (11). Strength of anterior and posterior connections within each individual were averaged to create a single outcome metric reflecting overall functional connectivity between the hippocampus and neighboring MTL structures. We additionally assessed the strength of these connections with the task-dependent fMRI data, separately within blocks that included the presentation of new scenes to encode into memory and blocks during which participants viewed familiar scenes. This was to explore the existence of a psychophysiological change whereby these connections may be more relevant to memory while actively engaging in complex scene-encoding compared to in the resting-state or when viewing familiar scenes. We used a neuropsychological test of memory ability that was independent of the complex scene-encoding task when investigating clinical correlates of MTL functional dynamics.

To investigate our primary questions of interest, regarding relationships between neuroimaging features of the MTL and clinical outcomes, correlational analyses (Pearson or Spearman rank analyses, where appropriate) and multiple linear regression analyses were performed using IMB SPSS Statistics software. As we hypothesized the direction of relationships assessed based on previous analyses on related clinical populations (9, 11), one-tailed statistical tests were used to determine significance. Multicollinearity and residuals were inspected for normality to confirm validity of general linear models. Non-parametric analyses were used for data that were not normally distributed. While this case series was not powered to statistically address the question of between-group differences in outcomes or the impact of seizure laterality, we explore the distribution of this data qualitatively.

Demographic and clinical characteristics are presented in Table 1. In three patients, FBDS remained strictly unilateral, and in another three patients no cognitive impairment was noted clinically during the acute illness (confirmed ACE-R > 94). None of the patients had abnormal MTL based on routine clinical imaging reports, and none had-ongoing seizures at the time of scanning.

Task-dependent hippocampal activity outcomes are presented in Figure 1B. Here, activity refers to mean within-ROI percent BOLD signal change when encoding new scenes relative to viewing familiar scenes. All healthy volunteers showed the expected positive mean bilateral percent signal change in the hippocampus during encoding. In contrast, only half of the participants who had autoimmune encephalitis demonstrated this normal activity pattern. Hippocampal MD was higher (indicating more damage) in 3/8 patients with FBDS than in any healthy volunteer (Figure 1C) and a statistical comparison of mean bilateral hippocampal MD between groups approached significance, indicating a trend toward elevated MD in this case series cohort of FBDS participants [F(3, 16) = 2.9, p = 0.056].

Next, by focusing on the three participants with unilateral FBDS, we explored if seizure laterality might have influenced hemisphere-specific hippocampal activity or microstructure. Only one participant had hippocampal volume asymmetry [Table 1, reported previously (3)]. All three patients with unilateral FBDS had a between-hemisphere difference in functional activity in the hypothesized direction, with lower activity in the hippocampus contralateral to the side with FBDS motor events (Figure 1B), while consistent hemispheric differences in hippocampal MD were not observed (Figure 1C).

Relationships Between Neuroimaging and Clinical Features

Next, we investigated functional connectivity between MTL structures of established hippocampal networks (11). Mean functional connectivity during the complex scene-encoding blocks (i.e., when presented with new images to memorize) between the hippocampus and neighboring MTL structures was significantly related to the ACE-R memory sub-score [r(5) = −0.80, p = 0.03]. By contrast, these relationships did not reach significance during the resting-state scan (p = 0.3) or when participants viewed familiar scenes (p = 0.1). There was no relationship between duration of disease prior to immunotherapy and any of our clinical measures, though it is important to note that this can be a subjective measure.

Relationships between functional imaging and clinical features were maintained when excluding the one patient with VGKC-complex antibodies without LGI1 specificity, and, time between FBDS onset to neuroimaging was not significantly correlated with functional features of the MTL.

This is the first fMRI investigation, to our knowledge, on autoantibody-associated FBDS. Here, we sought to answer whether functional characteristics of the MTL were related to peak seizure severity and underpinned post-treatment residual memory impairment. This was an important issue to address considering that although patients treated for autoimmune encephalitis with FBDS improve acutely, their response to immunotherapies in the chronic phase of the illness course is often poor.

Participants performed a complex scene-encoding task that activates MTL structures bilaterally when instructed to remember new scenes compared to viewing familiar scenes (11). All healthy participants showed the expected (16) hippocampal activity in response to the novel images, whereas this was observed only for patients with a relatively low maximal frequency of FBDS. Indeed, high seizure frequency in the acute phase has recently been linked to longer-term clinical function impairments (1). Peak seizure frequency was, by contrast, not significantly linked to hippocampal volume or MD, suggesting that FBDS may have lasting functional consequences which are distinct from structural damage. Interestingly, the autoimmune encephalitis patient without LGI1 autoantibody specificity had relatively mild FBDS frequency at peak, was the only patient with a good response to antiepileptic drugs without immunotherapies (3), and, consistent with fMRI as a biomarker of severity, had normal functional activity in the hippocampus during the scene-encoding task.

While patients performed scene-encoding, stronger functional connectivity between anterior and posterior hippocampal regions and MTL cortical areas was linked to poorer performance on a fMRI task-independent test of memory performance (i.e., the ACE-R). This may suggest that inefficient functional connectivity within the MTL while actively engaged in memory processes is related to residual cognitive impairment post-acute treatment.

Limitations of our fMRI task included no interstimulus-interval jitter, meaning we were unable to investigate reaction times during task performance in the scanner, and inability to separate the effects of memory-encoding from stimulus novelty. Nonetheless, functional characteristics during blocks participants viewed novel scenes correlated with performance on a fMRI task-independent test of memory ability. The task performed was relatively simple, making it potentially practical for future clinical applications. While correlational outcomes of this case series investigation are robust, the sample size should be expanded in future studies. Investigations replicating these analyses and assessing other potentially clinically-relevant aspects of brain function in autoantibody-associated FBDS and related conditions are encouraged.

Although no patients were experiencing clinical FBDS at the time of scanning, the presence of subclinical seizure activity cannot be ruled out, which might affect both subjects' cognitive ability and the BOLD imaging results. Subclinical seizure activity is difficult to detect even with EEG; in the absence of electrophysiological recordings we cannot rule it out. Resting state approaches such as Arterial Spin Labeling (ASL) might be useful tools in future to identify increased resting activity levels which might be consistent with seizure activity, though the specificity of any changes would be difficult to determine.

Functional characteristics of the MTL in patients treated for autoimmune encephalitis with FBDS may describe clinical features and parameters beyond that of structural damage, though the influence of subclinical seizure activity on these metrics cannot be ruled out. Future work may search to understand potential therapeutic modifiers of the brain's functional capacity to influence the long-term impact this condition. These functional imaging features may also serve as optimal biomarkers for treatment trials targeting seizures and chronic memory impairments.

Design and conceptualization of the data acquisition protocol was performed by CS, SI, and NV. AT, NV, JB, CR, AA-D, and CS participated in data collection and study documentation. Neuroimaging and statistical data analyses were performed by JN, who also drafted the manuscript. All authors contributed to revising of the manuscript for intellectual content.

Copyright © 2018 Nantes, Thomas, Voets, Best, Rosenthal, Al-Diwani, Irani and Stagg. This is an open-access article distributed under the terms of the Creative Commons Attribution License (CC BY). The use, distribution or reproduction in other forums is permitted, provided the original author(s) and the copyright owner(s) are credited and that the original publication in this journal is cited, in accordance with accepted academic practice. No use, distribution or reproduction is permitted which does not comply with these terms.