Cerebral cavernous malformations (CCMs) are vascular anomalies characterized by densely packed tortuous microvessels outlined with deficient interstitial brain parenchyma. They are the second most prevalent type of vascular malformation, accounting for 10–15% of all vascular malformations in the central nervous system (CNS). These dysplastic capillaries are mainly present in the brain and spine cord, but they may also affect the skin and liver, with increased propensity to leak and rupture, causing hemorrhagic strokes, recurrent headache, epilepsy, and focal neurological deficits (1). CCMs can occur in a sporadic or autosomal dominant fashion (Familial cerebral cavernous malformations, FCCM), and the latter tends to have multiple lesions as a consequence of inherited loss-of-function genetic variants, predominantly in any of the KRIT1/CCM1 (Krev interaction trapped 1), MGC4607/CCM2 (cerebral cavernous malformation 2), or PDCD10/CCM3 (programmed cell death protein 10) genes (2–4). The prevalence of genetic variants in the three genes is unknown, although there are several cases reported in different populations like Italian (5, 6), French (7), Spanish (8), Germany (9, 10), and Japanese (11). There are a few studies reporting CCM1 genetic variants, but only one CCM2 genetic variant was reported in Chinese patients (12–24).

In this study, we described the clinical and neuroradiological findings in two Chinese families with CCMs and identified two novel genetic variants in CCM1 and CCM2 genes, respectively.

Two pedigrees of the two Chinese families with CCMs were enrolled. This study was approved by the Institutional Review Board of Zhejiang University School of Medicine, and written informed consent was received from all subjects or their family members. The detailed medical history of the family members from the two pedigrees was obtained. Brain MRIs, including susceptibility-weighted images (SWI) and video-electroencephalography (VEEG), were performed in some cases.

Blood samples were collected from all members of these two families, and genomic DNA was extracted using commercial kits and then stored at −20°C. Exome sequencing was performed for CCM1, CCM2, and CCM3 genes, which were sequenced in the two probands by Axeq Technologies (Precision Gene Technologies, Beijing, China). Briefly, Agilent SureSelect v6 reagents were used to capture exons, and Illumina HiSeq X Ten platform was used for sequencing as previously reported (25). Variants identified by sequencing were analyzed for cosegregation in the family members by Sanger sequencing, and polymorphism was excluded by 100 normal controls.

The proband II:1 (Figure 1A) was a 59-year-old woman who visited our clinic for recurrent episodes with consciousness loss followed by whole body stiffness and shaking movements for 3 years. These attacks occurred 5 to 8 times per year without any medication treatments because the seizures happened during the sleeps. No minor episodic events were reported. SWI of brain MRI taken on July 3, 2017 showed hundreds of dark dots and patches in different sizes distributed across the cerebral hemispheres, cerebellum, and brainstem, which indicates multiple cavernous malformations (Figure 2, upper row). VEEG showed abundant spikes that originated from multiple brain regions (data not shown). Her memory declined, and she suffered insomnia over the past 2 years. Habitual nasal bleeding was denied. On physical exams, no vascular malformation was found on the skin. Routine blood examinations were normal. 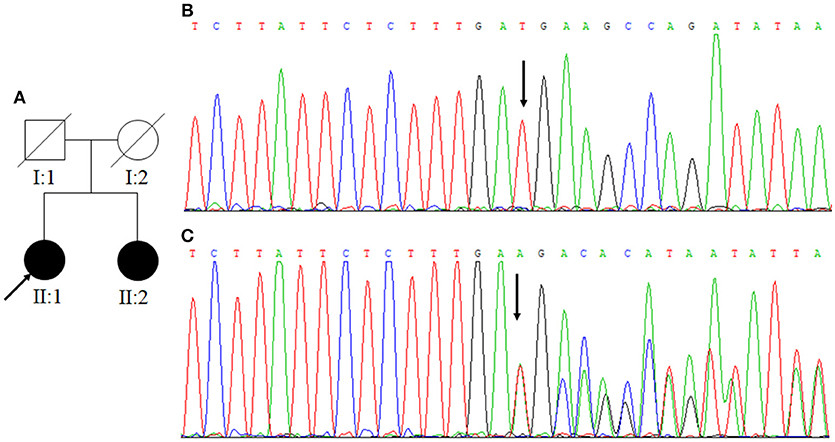 Figure 1. (A) Family One. Arrow indicates the proband; square represents a male, while circles represent females. The filled symbols mean CCM and slash indicates deceased. (B) The normal control sequences of CCM1 gene. (C) The genetic variant of c.1599_1601TGAdel (p.533Aspdel). Affected nucleotide is indicated with an arrow. 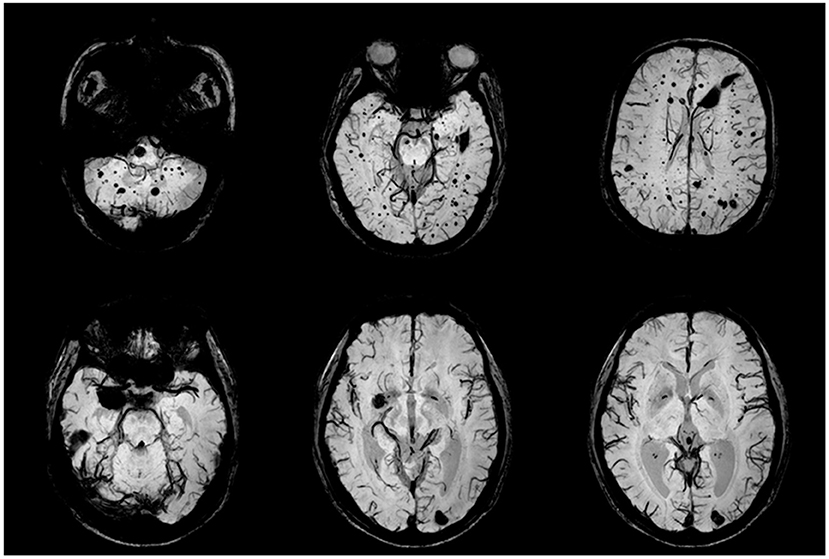 The proband's younger sister II:2 complained of chronic intensified and aggravated headaches for over 10 years. T2-weighted images of MRI showed 2 popcorn-like lesions in left occipital region and right temporal pole, and these lesions were hypo-intensities on SWI; those findings suggested chronic bleeding (Figure 2, lower row). No other illnesses or discomforts were reported. The proband's father (I:1) passed away due to a lethal heart attack at the age of 52 years, and her mother died of severe head trauma in a car accident at the age of 60 years. No cutaneous abnormalities, headache, stroke, or convulsion were recorded in the proband's parents.

The proband II:1 (Figure 3A) was a 34-year-old woman, presented with paroxysmal brief staring and loss of contact proceeded by uncontrollable weird thoughts for 2 years. Her minor seizures rarely evolved to generalize tonic-clonic seizures. She was administered multiple anti-seizure medications and several combinations, but the seizure frequency remained over 5 times per month. No positive neurologic sign was found. Whole brain MRI on March 6, 2014 showed three ultra-low intensity blooming lesions in the right cerebellar hemisphere and left basal ganglion on SWI, suggesting CCMs, and the “caput medusae”-like lesion on the left temporal-occipital cortex is compatible with venous malformation (Figure 4, upper row). VEEG showed abundant interictal spikes and slow waves over the left temporal region with phase reversals at T1 (data not shown). The patient received gamma knife radiosurgery targeting the left temporal lesion; however, the symptoms were not obviously improved. She was administered a combination of carbamazepine and topiramate. Comprehensive blood examinations including liver function, renal function, blood lipid, blood sugar, and blood electrolyte were normal. 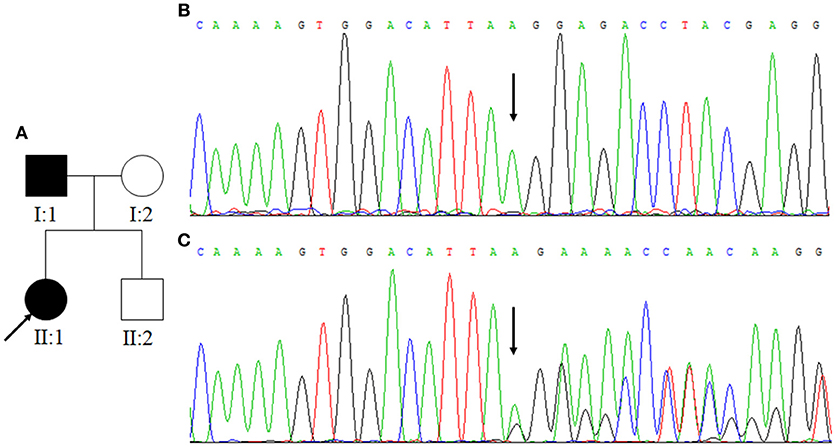 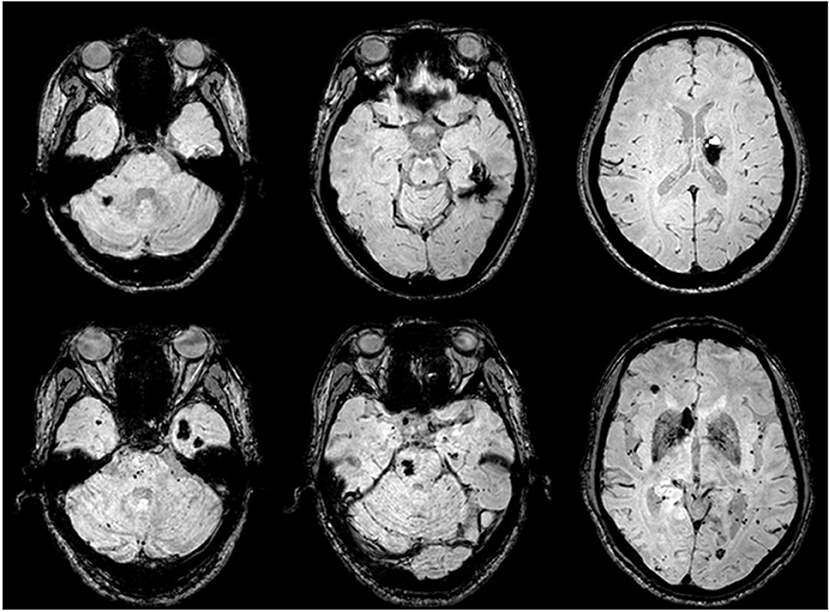 The proband's father I:1 was 60-years-old and began to develop episodic fears followed by confusion and motionlessness about 20 years ago; these episodes lasted 2 to 4 min each time and occurred 3 to 5 times per year, but it progressed to 5 to 10 times per month during the past 5 years. Although he took multiple medications, the compliance was poor. Sudden falls accompanied by extreme convulsion and tongue-bites occurred occasionally. He was a heavy alcohol consumer. Neurological examination and routine blood examinations were normal. SWI sequence of brain MRI revealed eight visible CCMs on the left temporal lobe, bilateral frontal lobe, pons, and cerebellum (Figure 4, lower row). VEEG revealed frequent independent spikes originating from the bilateral temporal lobe with left side predominance (data not shown).

Figure 5. Alignment of the sequences of CCM1 protein in different mammalians.

Familial CCMs exhibit more aggressive manifestations and an earlier age of onset when compared with sporadic cases, but familial CCMs are rare, accounting for ~6% of all CCMs. The disease is commonly presented with seizure, headache, and cerebral hemorrhage, but 11–44% patients might be asymptomatic for a long time, sometimes even lifelong (1). Depending on the symptoms and the findings in the proband, we justified that the proband's father or mother in Family One had CCM despite the absence of imaging evidence. CCM can be readily detected by MRI, particularly, the SWI with the characteristics of multiple dot or patchy lesions with markedly signal loss suggesting hemosiderin deposition. Other forms of vascular malformations, such as developmental venous anomalies, are thought to be closely associated with CCM and might co-exist with CCM as seen in the proband in Family Two.

Currently, over 200 distinct germline genetic variants have been identified as causative genetic variants in the CCM1, CCM2, and CCM3 genes (6). Most of the genetic variants are premature termination codons or large deletions (27, 28). Pathogenic deep intronic genetic variants of CCM1-3 remain a controversial topic (29). Current evidence suggests that three CCM-gene-encoding proteins interact with each other to form a complex, the CCM signaling complex (CSC), which further interacts with other proteins (1). CSC can regulate various cellular signaling, including the signaling involved in cell-cell junctions (30). CCM proteins can also interact with other proteins through FERM domain, and subsequently be involved in various signaling pathways such as integrin signaling, Notch signaling, VEGF signaling, etc (31, 32). In addition to loss of function in CCM genes, non-genetic factors are also believed to play an important role in the pathogenesis of CCMs (32).

In Family One, the CCM1 genetic variant, c.1599_1601TGAdel, is predicted to cause p.533Asp deletion. The proband and her sister had similar symptoms and radiological changes. Unfortunately, we did not get much information nor DNA samples from the proband's parents since they died early. Until now, more than 90 different CCM1 genetic variants have been reported, with most of them causing premature stop codons; this suggests a loss-of-function mechanism (2, 33), which is responsible for CCM pathogenesis (31). The p.533Aspdel genetic variant is located in the FERM domain of CCM1 protein at the C-terminus (residues 420–736). Thus, the deletion might affect the binding of CCM1 protein to GTPase Rap1 through the FERM domain, and consequently interfere with the signal pathways involving in cell-cell junctions (30).

In Family Two, the CCM2 genetic variant, c.773delA (p.K258fsX34), is predicted to cause non-sense-mediated decay. The patients showed typical CCM phenotypes, while different clinical manifestations were observed between the proband II:1 and her father I:1; the father I:1 had more severe clinical manifestations and CCMs lesions. This suggests that other unidentified CCM genes; for example, the putative CCM4 gene; epigenetic factors; or other unknown variants of non-CCM genes may contribute to these differences in clinical penetrance between these two familial members. Thus, further studies in gene knockout animals are required to explore genotype-phenotype correlations of these CCM genetic variants and phenotype variability.

Written informed consent to publish the report was obtained from each member of the family.

We are grateful to the patients and their family for their contributions to the study.

Copyright © 2018 Wang, Wu, Zhang and Zhao. This is an open-access article distributed under the terms of the Creative Commons Attribution License (CC BY). The use, distribution or reproduction in other forums is permitted, provided the original author(s) and the copyright owner(s) are credited and that the original publication in this journal is cited, in accordance with accepted academic practice. No use, distribution or reproduction is permitted which does not comply with these terms.