Methods: Patients with anterior circulation occlusion were evaluated if they underwent ERT based on multiphase computed tomography angiography and achieved successful recanalization (≥thrombolysis in cerebral ischemia 2b). Collateral degrees were dichotomized based on the pial arterial filling score, with a score of 0–3 defined as a poor collateral status. BPV parameters include mean, standard deviation, coefficient of variation, and variation independent of the mean (VIM) for systolic blood pressure (SBP), diastolic blood pressure (DBP), mean blood pressure, and pulse rate (PR). These parameters were measured for 24 h after ERT and were analyzed according to occlusion sites and stroke mechanisms. Associations of BPV parameters with clinical outcomes were investigated with stratification based on the baseline collateral status.

Increased BPV is associated with sympathetic overactivity, hyperglycemia, immunosuppression, and coagulopathy (10). Prior studies have indicated that high BPV is associated with poor neurological outcomes in acute ischemic stroke patients not indicated for ERT, non-recanalized patients after intravenous thrombolysis (IVT) for ICA occlusion, or patients with incomplete recanalization after ERT (9, 11–13). The effect of BPV on the clinical outcomes in recanalized patients after ERT had not been evaluated before.

We retrospectively selected patients from the database at a single hospital-based stroke registry. The hospital institutional review board approved this retrospective study (B-1705-399-103). This study included patients with anterior circulation occlusion who underwent ERT based on multiphase CT angiography (CTA) and achieved successful recanalization (thrombolysis in cerebral ischemia [TICI] ≥ 2b) at the institute between April 2015 and February 2017. Baseline demographic and clinical information, including neurological outcomes and imaging data, were obtained from the registry. Patients who underwent ERT because of posterior circulation occlusion or bilateral occlusion were excluded from the analysis.

Multiphase CTA imaging was performed using a 256-slice multi-detector CT scanner (Brilliance iCT; Philips) equipped with a collimator of 128 × 0.625 mm, 120 kV, and 90 mAs. The first phase of multiphase CTA was acquired from the aortic arch to the vertex during the peak arterial phase. After a 4-s delay, patients were scanned from the skull base to the vertex for 3 s in the second phase (during the peak venous phase) and the third phase (during the late venous phase). A total of 90 mL of contrast agent was injected at a rate of 5 mL/s.

BP was measured every 15 min for 2 h; then, every 30 min for 6 h; and subsequently, every hour for 24 h after IVT. In the absence of any clinical event, BP was evaluated at least once every hour in the non-paretic arm of the patient in the stroke and intensive care units. A non-invasive electronic monitoring device that automatically recorded the measurements in the electronic medical record was used. Acute BP measurement and management followed the current guidelines proposed by the American Stroke Association and the Korean Stroke Society (15). Before recanalization, blood pressure was not lowered unless exceeds 220 mmHg for SBP and 120 mmHg for diastolic blood pressure (DBP). If indicated for IVT, blood pressure was controlled under 185 mmHg for SBP and 110 mmHg for DBP. Once recanalized successfully after ERT, SBP was controlled over 100 mmHg and below 160 mmHg. A method and a level of BP control was left to an attending clinician's decision.

We calculated the following parameters of SBP, DBP, mean BP (MBP), and pulse rate (PR) 24 h after admission: mean, standard deviation (SD), coefficient of variation (CV, SD/mean), and variation independent of the mean (VIM). SD and CV were frequently used and validated in previous studies to measure BPV (11, 16, 17). Since SD and CV are positively correlated with mean BP, it is necessary to derive a supplemental variable uncorrelated with mean levels. VIM is a transformation of SD and is devised to be independent of mean. VIM is calculated as k × SD/(mean), where ß is derived from the regression coefficient of the plot of the natural SD logarithm (y-axis) on the natural mean logarithm (x-axis) (18). We corrected VIM using the following equation:

Early neurological improvement (ENI) is defined as ≥50% or as an 8-point reduction from the baseline in National Institutes of Health Stroke Score (NIHSS). A certified neurologist determined the neurological status of patients on days 1 and 7 using NIHSS. For patients discharged prior to 7 days post-injury, the neurological assessment was performed at the day of discharge using NIHSS. Functional outcomes were assessed using modified Rankin scale (mRS) by a neurologist at the outpatient clinic or by a trained nurse if a follow-up visit was not available after 3 months. A favorable outcome was defined as modified Rankin scale score (mRS) ≤ 2.

Baseline characteristics (age, sex, initial stroke severity, stroke risk factors, stroke mechanism, occlusion site, onset to recanalization time, and clinical outcome variables) were integratedly analyzed with the collateral circulation status and functional outcome. Median or mean values of BPV parameters were compared according to occlusion site, stroke mechanism, baseline collateral status, and functional outcome. Chi-squared or Fisher's exact test was used to analyze categorical variables; independent t-test, or Mann–Whitney U-test was used to analyze continuous variables. To estimate odds ratio (OR) and 95% confidence interval (CI) for the independent association of each BPV parameter with clinical outcomes, ordinal logistic regression analysis was performed. Because there was a significant interaction between BPV parameters and the collateral status, the analysis was performed with stratification based on the collateral status. Variables for adjustments were selected based on univariate analysis with a p ≤ 0.05. Among the selected variables (age, sex, initial NIHSS, DM, current smoking, and occlusion site), variables that did not contribute to the model were excluded using a likelihood ratio test. As a result, age, sex, initial NIHSS, and occlusion site were included in the final model. Goodness-of-fit was evaluated using the Hosmer–Lemeshow test. The predictive logistic model was internally validated by bootstrap simulations. Analyses were performed using Stata version 13.0 (StataCorp, Austin, TX, USA). All tests were 2-sided, and a p ≤ 0.05 was considered significant.

A total of 90 patients with acute ischemic stroke due to anterior circulation occlusion, who achieved successful recanalization (≥TICI 2b), were included in the analysis. The median number of BP measurements was 31 (interquartile range, 26–37) and mean time from IAT to admission was 63.5 ± 46.6 min. 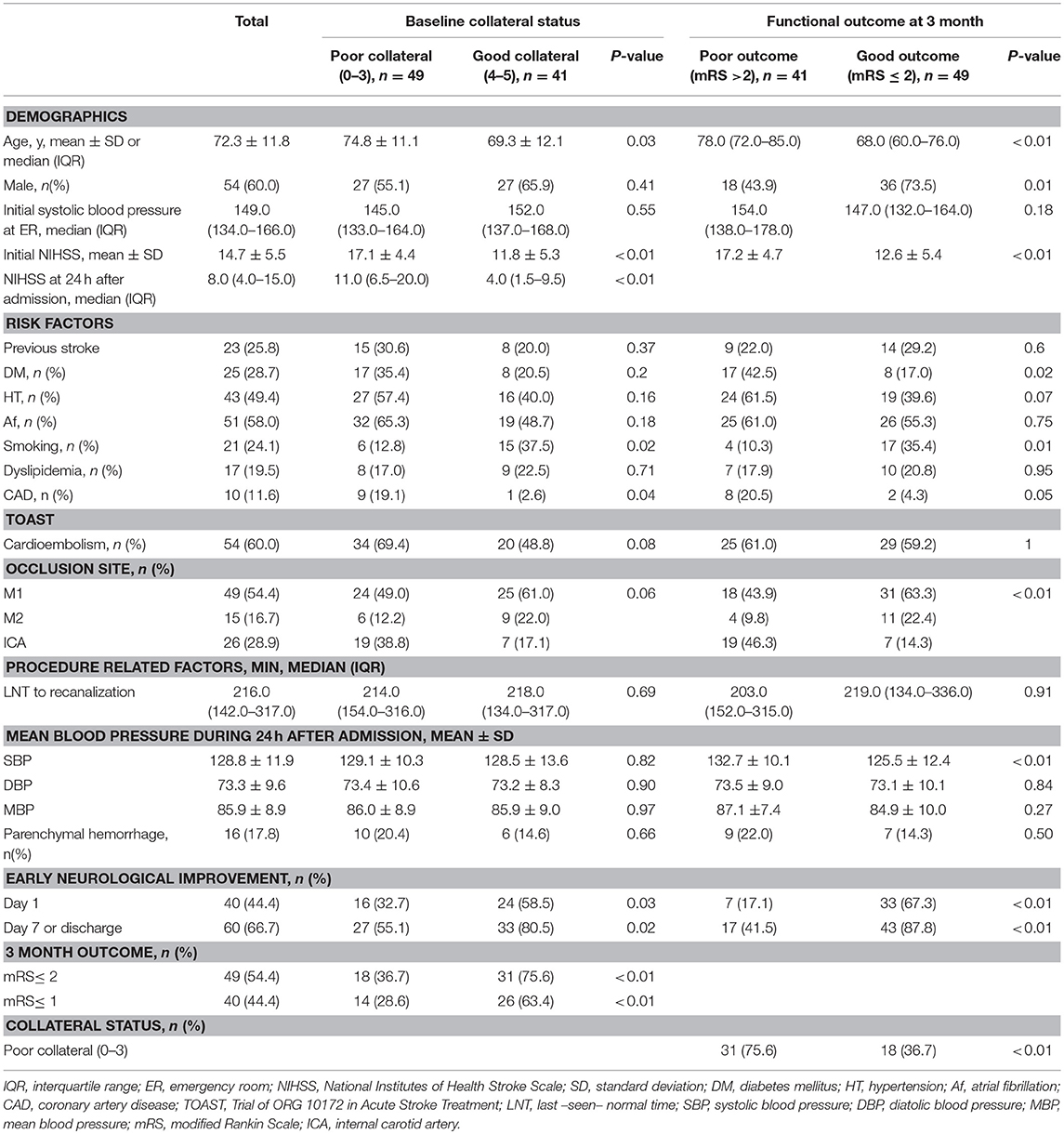 Table 1. Baseline characteristics of the study subjects based on the collateral status and functional outcome.

The comparisons of BPV parameters according to the occlusion sites (ICA vs. MCA) and mechanisms of stroke [cardioembolic (CE) vs. non-CE] are presented in Figure 1. Most BPV parameters [mean of SBP (SBPmean); SD, CV, and VIM of DBP (DBPSD, DBPCV, and DBPVIM) and MBP (MBPSD, MBPCV, and MBPVIM); and CV and VIM of PR (PRCV and PRVIM)] were significantly higher in patients with ICA occlusion than in those with MCA occlusion (Figure 1, Table 2). DBPSD, DBPCV, and DBPVIM were significantly higher in patients with CE stroke than in those with non-CE stroke (Figure 2, Table 2). 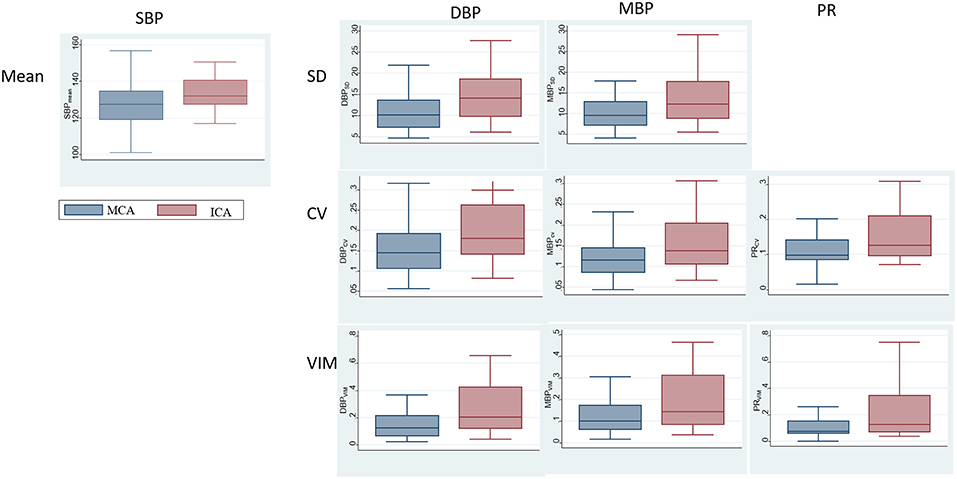 Figure 1. Comparison of blood pressure variability (BPV) parameters according to the occlusion sites.

Table 2. Comparison of BPV parameters according to the occlusion site, mechanism of stroke, and recanalization time.

Figure 2. Comparison of blood pressure variability (BPV) parameters according to the mechanisms of stroke.

Most of the BPV parameters (SBPmean, SBPSD, SBPCV, and SBPVIM; DBPSD, DBPCV, and DBPVIM; MBPSD, MBPCV, and MBPVIM; and PRSD, PRCV, and PRVIM) were significantly higher in patients with poor outcomes than in those with good outcomes among those with poor collateral circulation during the first 24 h after ERT. However, no significant differences were observed in these BPV parameters in patients with good collateral circulation based on functional outcomes (Table 3). 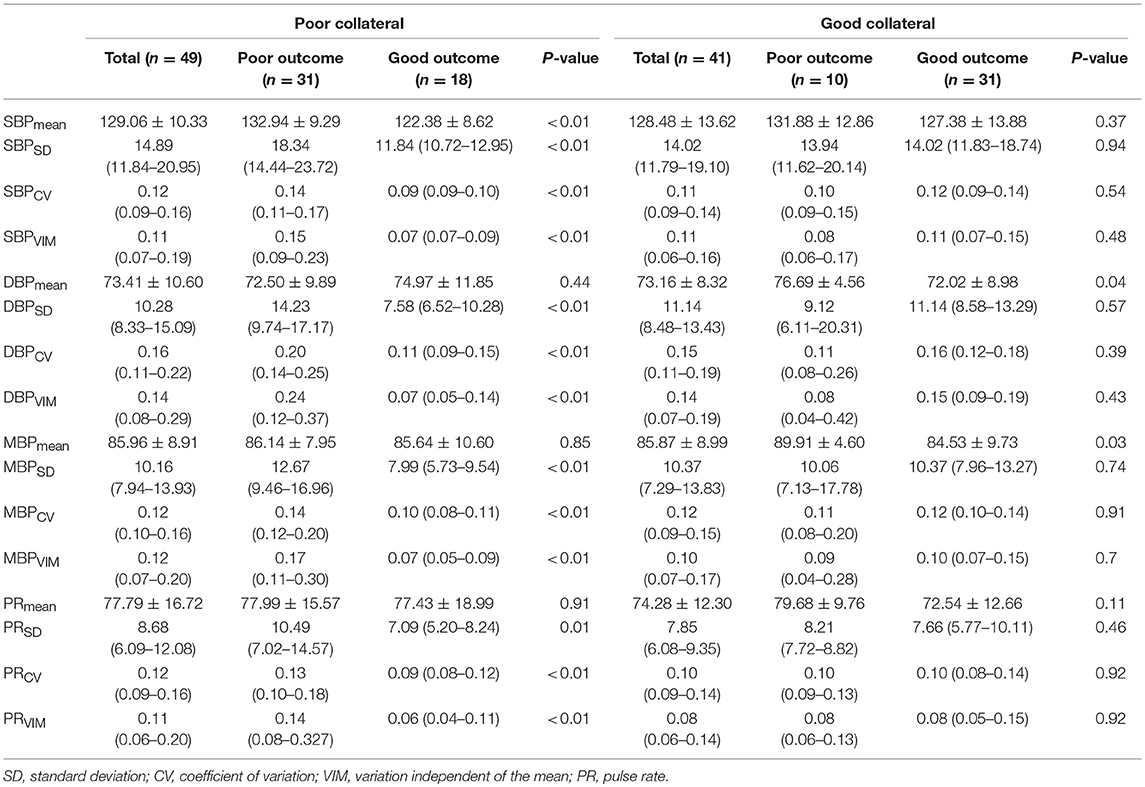 Table 3. Association of blood pressure variability parameters with clinical outcomes according to the collateral status.

After adjustment for age, sex, initial severity of stroke (i.e., NIHSS), and occlusion site, the SBPSD, SBPCV, SBPVIM, and PRmean remained significant predictors of ENI on day 1 and mRS at month 3 in patients with poor collateral circulation. MBPSD, MBPCV, and PRSD were associated with mRS shift toward poor functional outcomes at month 3 (Table 4). Figure 3 indicates a positive association between the BPV parameters and mRS increment in the patients with poor collateral circulation. 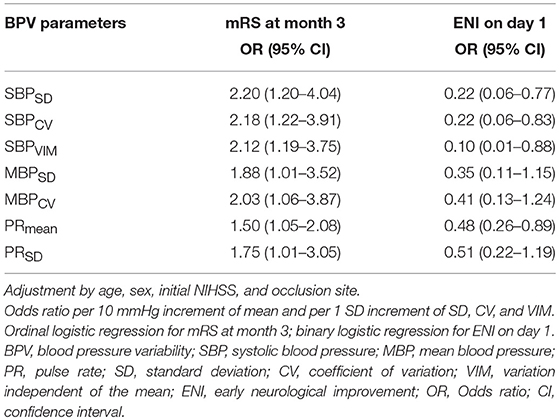 No significant association between BPV and clinical outcomes were found after stratification based on the occlusion sites and stroke mechanisms.

As substantial reperfusion is achieved in 72–88% of cases currently (20), the importance of postreperfusion blood pressure management is increasing. Our study was intended to investigate the effect of postreperfusion BPV on clinical outcomes in ischemic stroke patients with successful recanalization. According to the result of recent study, increased BPV is associated with poor neurological outcome in patients with large ischemic core, large mismatch volume, proximal vessel occlusion, and good collaterals (11). Contrary to the prior study, the detrimental effect of increased BPV after recanalization was evident in patients with poor collateral circulation.

The differences of BPV in patients with different occlusion sites and stroke subtypes are noteworthy. Although the absolute level of BP is not related to initial stroke severity and infarct volume (23, 24), higher BPV in patients with ICA occlusion suggests that these factors may have a correlation with BPV. More severe stroke is associated with the increased sympathetic activity, and sympathetic overactivity induces high BPV (16, 25, 26). Decreased function of arterial baroreceptor could also increase BPV (16, 26). Higher BPV in patients with ICA occlusion may be due to sympathetic overactivity and decreased baroreflex sensitivity. It is unclear why only DBP-related variables (DBPSD, DBPCV, and DBPVIM) are significantly higher in cardioembolic stroke than in other stroke types caused by different mechanisms including large artery atherosclerosis. Further studies are needed to assess whether the results are due to changes in coronary perfusion pressure affected by diastolic BPV or merely chance findings without clinical meaning.

There are several limitations to consider when interpreting our findings. First, the retrospective nature and small study population in this study warrant further investigation with a large, prospective, and multicenter cohort. Second, the association of BPV with clinical outcomes in patients with poor collateral circulation does not constitute a causal relationship. Because this study included a small number of hemorrhagic transformation or ischemic stroke recurrence, the mechanism of deleterious effects of BPV in patients with poor collateral status could not be determined. Lastly, pretreatment or intraprocedural blood pressure could also have influence on clinical outcome and obtaining these data retrospectively was not available and beyond the scope of the current analysis.

This study received no specific grants from any funding agencies in the public, commercial, or not-for-profit sectors.

Copyright © 2019 Chang, Jeon, Jung, Gwak and Han. This is an open-access article distributed under the terms of the Creative Commons Attribution License (CC BY). The use, distribution or reproduction in other forums is permitted, provided the original author(s) and the copyright owner(s) are credited and that the original publication in this journal is cited, in accordance with accepted academic practice. No use, distribution or reproduction is permitted which does not comply with these terms.