Background: Cilostazol and isosorbide mononitrate (ISMN) are candidate treatments for cerebral small vessel disease and lacunar ischaemic stroke. As both drugs may influence hemoglobin and platelet count, and hemodynamics, we sought to assess their effects in the lacunar intervention-1 (LACI-1) trial.

Conclusions: Cilostazol increased heart rate and platelet count, and reduced Buckberg index, whilst both drugs may individually reduce arterial stiffness adjusted for heart rate. Neither drug had clinically significant effects on hemoglobin or platelet function over 8 weeks. Further assessment of the safety and efficacy of these medications following lacunar ischaemic stroke is warranted.

Cerebral small vessel disease (SVD) is a common cause of stroke—both “lacunar” ischaemic and haemorrhagic stroke—cognitive impairment and dementia (1). SVD is a disorder of the small perforating arterioles of the brain involving endothelial dysfunction, inflammation (2), and blood-brain barrier breakdown (3). However, there are no specific treatments for either primary or secondary prevention of SVD and its associated clinical manifestations (4). Two medications with potential beneficial mechanisms of action have been highlighted for potential repurposing: cilostazol (a phosphodiesterase 3′ inhibitor used in stroke prevention in the Asia-Pacific Region) and isosorbide mononitrate (ISMN, a nitric oxide donor widely used in ischaemic heart disease). Little is known about the safety and efficacy of these drugs in SVD, particularly in combination, and yet their effects may be synergistic (4). As a mild antiplatelet, cilostazol can cause bleeding sufficient to result in anemia. Further, cilostazol can rarely cause thrombocythaemia (5). Both drugs can lower peripheral blood pressure (BP) and increase heart rate (5, 6), but data regarding their effects on central hemodynamics following ischaemic lacunar stroke are lacking.

The Lacunar Intervention Trial-1 (LACI-1) tested cilostazol and ISMN, alone and in combination, for tolerability in patients with prior lacunar ischaemic stroke (7). Overall, the medications were well-tolerated by participants (8). As both drugs may influence platelet count and hemoglobin level in addition to hemodynamics, we sought to assess these important safety outcomes.

LACI-1 was a phase IIa, partial factorial, dose-escalation, prospective, randomized, open-label, blinded endpoint (PROBE) trial. Details regarding the trial protocol and statistical analysis plan are available (7), and the main results have been presented and published (8, 9). In summary, LACI-1 recruited 57 patients from stroke centers in Edinburgh and Nottingham, UK, with clinically confirmed lacunar ischaemic stroke, without dependency and able to consent themselves, and randomized them to one of four groups for 9 weeks: ISMN 25 mg twice daily; cilostazol 100 mg twice daily; both ISMN and cilostazol started immediately; or both medications with a 3-week delayed start, thus providing a drug-free control period (see Figure 1 in main paper) (8). Patients were contacted on alternate weeks to enquire about symptoms (headache, nausea, diarrhea, vomiting, and bleeding) using a structured questionnaire. All patients continued to take guideline secondary stroke prevention medications including statins and antihypertensive treatment where appropriate. Hematology and haemodynamic measures were assessed blind to treatment allocation. 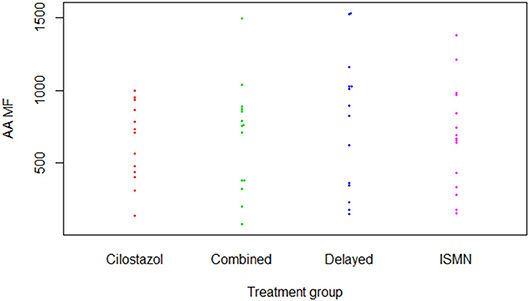 All patients provided written informed consent. LACI-1 was approved by the Scotland A Research Ethics Committee (15/SS/0154) and registered (ISRCTN 12580546).

Full blood counts were taken at baseline, and at weeks 3 and 8: hemoglobin (g/L); and platelet count (×109/L). Platelet function was assessed with measurement of surface expression of P-selectin (CD63P) using kits sensitive to aspirin (arachidonic acid) or clopidogrel (adenosine diphosphate) at the same timepoints (10). An unstimulated sample provided baseline expression data at each timepoint. Median fluorescence (MF) was recorded for platelet surface expression of P-selectin for each sample using flow cytometry. Platelet P-selectin expression was chosen since blood samples can be obtained and fixed at multiple clinical sites then transported for measurement at a central core laboratory.

The sample size calculation for LACI-1 was based on the ability to detect a difference of 90 vs. 55% (i.e., an absolute difference of 35%) between those reaching target dose on one drug vs. both drugs. For 80% power, significance 0.05, a sample size of 55 was needed.

In total, 57 patients were recruited at mean 203 [median 256] days after their index stroke with a mean age of 66 (11) years and 18 (32%) were female (Table 1). Most participants (97%) were on clopidogrel for stroke secondary prevention (guideline therapy in the UK), the remainder on aspirin. Apart from the cilostazol group being slightly older, baseline characteristics were well-balanced across the treatment groups. One participant in the delayed start group withdrew during follow-up.

There were no differences in hemoglobin at week 8 between treatment groups (Table 2). Platelet count was slightly higher in those on cilostazol 286.8 ×109/L vs. no cilostazol 249.1 ×109/L (MD 35.73, 95% CI 2.81 to 68.66, p = 0.033). No differences were noted in platelet function between treatment groups in aspirin or clopidogrel tests (Figures 1, 2). There was no difference in bruising or bleeding with either medication in isolation or combination during the study. 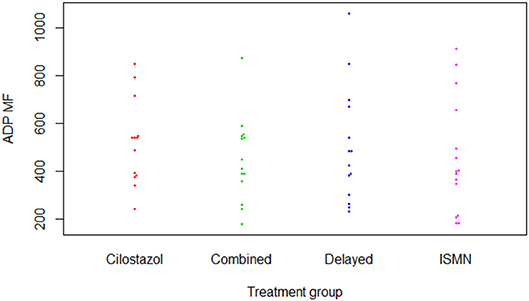 In this secondary analysis of the LACI-1 trial—the first trial to assess cilostazol and/or ISMN in lacunar ischaemic stroke patients, and the first trial to assess both together in any ischaemic stroke—we have demonstrated that cilostazol and ISMN in isolation and in combination do not influence hemoglobin levels or platelet function in the short-term when given in addition to usual secondary stroke prevention therapy. Platelet count was significantly higher in those randomized to cilostazol. Cilostazol alone and both drugs in combination, reduced Buckberg index (subendocardial perfusion), whilst cilostazol increased heart rate. Both drugs in isolation may reduce arterial stiffness when adjusted for heart rate.

Due to its mild antiplatelet effects, cilostazol can uncommonly (≥1/100 to <1/10) cause bleeding sufficient to lead to anemia according to the summary of product characteristics (SmPC) (5). Although we have a small population, it is reassuring that hemoglobin was stable between treatment groups during the trial given that all participants were already on guideline antiplatelet therapy. The increase in platelet count seen with cilostazol at 8 weeks needs further investigation, especially since thrombocythaemia, is known to occur rarely (≥1/10,000 to <1/1,000) (5). The lack of any difference in platelet function between the treatment groups is of further reassurance.

ISMN is known to lower BP and increase heart rate and so can commonly lead to postural dizziness (≥1/100 to <1/10) and rarely syncope (6). Cilostazol can increase heart rate and, if co-administered with BP-lowering medication, an additive hypotensive effect with reflex tachycardia is reported (5). Neither symptom were apparent across the trial population (8). Importantly, despite cilostazol increasing heart rate in our population, no significant hypotensive effect was seen in combination with participants' pre-prescribed antihypertensives (74% were on antihypertensives at randomization) or ISMN. Central haemodynamic data regarding cilostazol and/or ISMN in the context of lacunar ischaemic stroke are lacking. Buckberg index is a marker of subendocardial perfusion, which is reduced with increased heart rate (11). Cilostazol and both drugs in combination reduced Buckberg index, which may be due to their underlying effects on heart rate, or may reflect that the patients allocated to cilostazol were older than those in other allocated groups. ISMN was associated with increased Augmentation index (a marker of arterial stiffness) unadjusted for heart rate, but when Augmentation index was adjusted for heart rate, cilostazol and ISMN in isolation both non-significantly reduced arterial stiffness. Given that small vessel stiffness is implicated in the pathophysiology of cerebral SVD (12), medications that reduce arterial stiffness may be of benefit.

The strengths of this LACI-1 substudy include using data from the first randomized controlled trial assessing both cilostazol and ISMN in lacunar ischaemic stroke patients. There are, however, limitations. First, the sample size was small and the study was not powered to look for differences in hematological or haemodynamic secondary outcomes, therefore some findings may represent chance. Second, the treatment duration was relatively short and so we cannot comment on the longer-term effects of these medications on hematological markers or hemodynamics. Third, those who were randomized to cilostazol were older which may explain some of the reported differences in these outcomes. Last, there was no formal control group throughout the trial, rather the delayed start group represented a drug-free control period. This gave the opportunity to establish whether starting one drug first over the other impacted upon side-effects, whilst still providing a control group for the first 3 weeks of the study.

Data contributing to this manuscript were presented, in part, as posters at the European Stroke Organization Conference (ESOC) in Gothenburg, Sweden May 2018: Appleton et al. (13, 14).

Copyright © 2019 Appleton, Blair, Flaherty, Law, May, Woodhouse, Doubal, Sprigg, Bath and Wardlaw. This is an open-access article distributed under the terms of the Creative Commons Attribution License (CC BY). The use, distribution or reproduction in other forums is permitted, provided the original author(s) and the copyright owner(s) are credited and that the original publication in this journal is cited, in accordance with accepted academic practice. No use, distribution or reproduction is permitted which does not comply with these terms.