Götz Thomalla5 on behalf of the WAKE-UP Investigators

Introduction: In WAKE-UP (Efficacy and Safety of MRI-based Thrombolysis in Wake-Up Stroke), patients with an acute stroke of unknown onset time were randomized to treatment with intravenous alteplase or placebo, guided by MRI.

Methods: In this exploratory post-hoc secondary analysis we compared clinical and imaging data, as well as treatment effects and safety of intravenous thrombolysis between patients with infra- vs. supratentorial stroke.

Discussion: WAKE-UP was underpowered for demonstrating treatment effect in subgroup analyses however, based on our current results, there is no evidence to recommend withholding MRI-guided thrombolysis in patients with unknown onset stroke of infratentorial localization.

The WAKE-UP trial (a randomized, double-blind, placebo-controlled trial, ClinicalTrials.gov number, NCT01525290) (1) was an investigator-initiated, multicenter, randomized, double-blind, placebo-controlled clinical trial which provided evidence of clinical benefit of MRI-guided treatment with intravenous alteplase in acute stroke patients with an unknown time of symptom onset. The study was based on the concept of DWI-FLAIR mismatch, with lesions visible on diffusion-weighted imaging (DWI) but not clearly visible on fluid-attenuated-inversion-recovery (FLAIR) identifying patients within 4.5 h of stroke onset. This concept was established through previous studies reporting a high specificity (78%) and positive predictive value (83%) of the DWI-FLAIR mismatch in identifying hyperacute stroke patients (2). Since previous studies have shown that FLAIR signal changes might develop more slowly in infratentorial than in supratentorial stroke (3, 4), there remained uncertainty about the safety and efficacy of thrombolysis based on DWI-FLAIR mismatch in this cohort. In WAKE-UP, patients were randomized irrespective of the localization of the acute ischemic stroke, providing us with an opportunity to perform a subgroup analysis of patients with brainstem and cerebellar strokes. The objective of the current study was to investigate the safety and efficacy of intravenous alteplase administered based on the presence of a DWI-FLAIR mismatch in patients with infratentorial strokes.

The national competent authorities and ethics committees in all participating countries approved the study. WAKE-UP was registered at https://www.clinicaltrials.gov. Unique identifier: NCT01525290. URL: https://www.clinicaltrialsregister.eu. Unique identifier: 2011-005906-32. Informed consent was obtained from all patients prior to enrollment into the trial. Patients were included in this substudy if the sole location of their acute ischemic lesion (based on baseline DWI) was in one or more of the following brain regions: the pons, medulla oblongata, cerebellum, or mesencephalon. We examined demographic characteristics, clinical, and imaging data at baseline and follow-ups for this subgroup of patients and compared them to patients with a supratentorial stroke.

The primary efficacy endpoint was favorable outcome defined as a score of 0–1 on the modified Rankin scale (mRS) at final follow up (90 days post-stroke). As a secondary efficacy endpoint we evaluated an ordinal analysis of the mRS (“shift analysis”). The primary safety endpoint was death or dependence (defined as a score of 4–6 on the mRS at 90 days post-stroke), additional safety outcomes were the incidence of symptomatic intracerebral hemorrhage (SICH) according to the protocols of SITS-MOST, ECASS II, ECASS III, NINDS, and parenchymal hemorrhage type 2 (PH-2) on follow-up imaging 22–36 h after treatment (5–8).

Statistical analyses of treatment effects were performed in the intention-to-treat population. To investigate the interaction between stroke location (i.e., infra- vs. supratentorial lesion) and treatment effect on the primary endpoint, we used an unconditional logistic regression model, relating the log-odds of the primary outcome with the covariate of interest, the treatment group, and their interaction. The interaction term was tested with the Wald-Chi-squared test, and the treatment effect (odds ratio [OR]) and its 95% confidence interval (CI) was estimated for each category of the stroke location. We furthermore repeated the analysis of primary and secondary endpoints as in the original trial analysis in the subpopulation of patients with infratentorial strokes. The main efficacy variable as well as the safety endpoints were assessed using an unconditional logistic regression analysis, fitted to estimate the OR and its 95% CI interval. The categorical shift in the distribution of mRS scores was analyzed by fitting a proportional-odds logistic regression model. All analyses were adjusted for the stratification parameters age and NIHSS. All tests were carried out with a two-sided alpha level of 5% without correction for multiple comparisons.

Comparison of Infra- vs. Supratentorial Strokes in the Screened Population

Comparison of Infra- vs. Supratentorial Strokes in the Intention-to-Treat Population 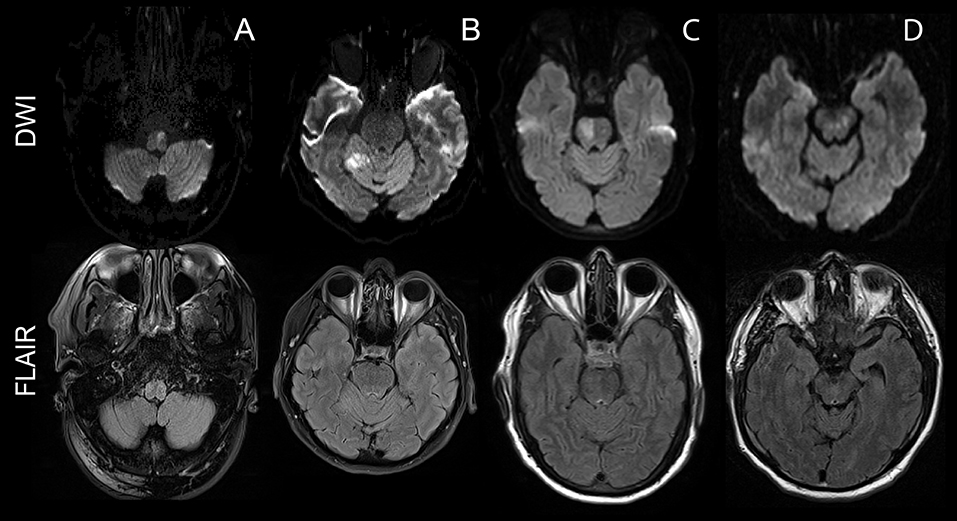 Figure 1. Examples of infratentorial strokes in the intention-to-treat WAKE-UP cohort. The upper row shows diffusion-weighted images depicting the acute ischemic stroke. The bottom row shows a FLAIR image of the corresponding slice, depicting a lack of signal hyperintensity in the area of the acute stroke. The different columns offer examples for the different stroke locations included into this substudy: (A) depicts a stroke of the ventral left portion of the medulla oblongata, (B) a right-sided cerebellar stroke in the feeding territory of the superior cerebellar artery, (C) a right-sided stroke in the pons, and (D) a focal mesencephalic stroke. 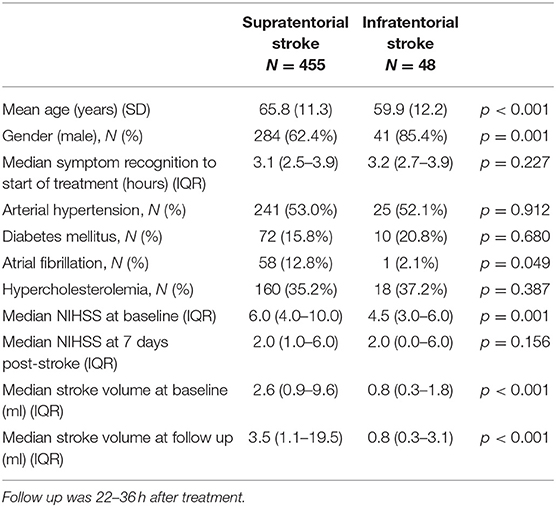 Table 1. Group comparison between patients with an infra- and a supratentorial localization of the acute stroke in the intention-to-treat population.

Treatment with alteplase was associated with higher odds of favorable outcome with no significant heterogeneity of treatment effect for stroke subtype (infratentorial vs. supratentorial). The adjusted OR for favorable outcome with alteplase was 1.31 (95% CI 0.41–4.22) in patients with infratentorial infarct and 1.67 (95% CI 1.11–2.51) in patients with supratentorial infarct (test for interaction, p = 0.70; see Figure 2).

Figure 2. Forest plots depicting the effect (adjusted OR) of alteplase on favorable outcome in patients with a supra- and infratentorial stroke with no evidence of a significant interaction between stroke localization and treatment effect.

Results in the Subpopulation of Infratentorial Strokes 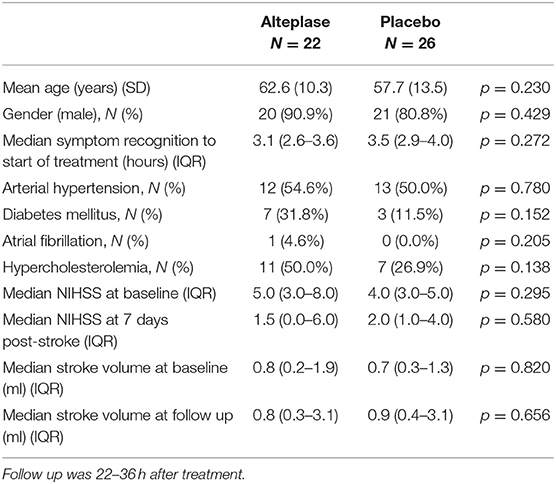 Table 2. Comparison between patients who received alteplase and those who received placebo in the group of patients with an infratentorial stroke localization.

WAKE-UP demonstrated a clear clinical benefit of treatment with intravenous alteplase in patients with an acute ischemic lesion visible on DWI but not yet evidently visible on FLAIR imaging. In this secondary post hoc analysis, we focused on the treatment effect and further elucidated the clinical characteristics and outcome in a subpopulation of WAKE-UP patients with a brainstem or cerebellar DWI lesion. We did not observe heterogeneity of the treatment effect based on stroke localization. There was no difference in death or dependence between the two treatment arms and no symptomatic intracerebral hemorrhages occurred in our cohort of patients with infratentorial ischemic lesions. Thus, we do not recommend excluding patients with infratentorial stroke of unknown time of symptom onset with a DWI/FLAIR mismatch from intravenous thrombolysis. However, the analysis was unable to prove benefit of thrombolysis in the alteplase arm, presumably due to the fact that the trial was underpowered to demonstrate superiority in this context. An additional limitation of the study was the inclusion of patients with relatively mild strokes, making the generalization of the findings on patients suffering severe stroke difficult.

There were some clinical differences between the subgroups. Infratentorial stroke patients were younger and more frequently male as compared to patients with supratentorial stroke, which corresponds to trends reported in literature (4, 9). They also had lower baseline NIHSS scores and smaller stroke volumes, results which are logical and equally in line with previous observations (4, 9). The higher prevalence of atrial fibrillation in patients with supratentorial as opposed to infratentorial stroke, as found in our study, has similarly been previously reported (9). These findings could in part be explained by the younger age and male predominance in our cohort, as there is a known higher prevalence of atrial fibrillation in older women leading to an increased risk of severe cardioembolic strokes in the anterior circulation in females (10).

In the context of stroke of unknown onset, previous research has shown that ischemic lesions in infratentorial brain regions likely take longer to develop a FLAIR hyperintense signal (4) which subsequently implies that a proportion of patients treated based on the presence of a DWI-FLAIR mismatch are likely beyond the conventional 4.5 h time window for rt-PA. Justifiably, at the time of the study's conduct, this raised potential safety concerns. Our current analysis suggests that these concerns were unfounded as no deaths and no parenchymal hemorrhages (symptomatic or otherwise) occurred in our subgroup of patients with infratentorial strokes. This may in part be the effect of the mild stroke severity in our cohort, but is also in line with previous large cohort studies which have reported very low SICH rates in patients with isolated brainstem and cerebellar strokes (9, 11). Also befitting the literature (9, 11), the percentage of observed hemorrhagic transformations was lower in the subgroup of infratentorial as compared to supratentorial stroke patients, which comes to no surprise as it is often not associated with thrombolysis but rather dependent on stroke size and severity (12). This underlines the safety of patient selection for intravenous thrombolysis based on the DWI-FLAIR mismatch approach in infratentorial, mild to moderate stroke. Some previous studies have pointed to a lesser importance of the time to treatment (with regards to developing intracranial hemorrhage or unfavorable outcome) in posterior circulation strokes as compared to anterior circulation strokes (13). However, it is also conceivable that the stage of tissue damage depicted by a positive DWI but negative FLAIR signifies a condition in which thrombolysis is still safe, irrespective of the actual time which elapsed since the onset of ischemia. Other recent studies have equally pointed to the safety (as well as efficacy) of acute stroke treatment in the unknown and extended time window in carefully selected patient cohorts, further moving evidence away from time-based and toward tissue-based models and individually tailored therapy (14).

Our analysis did not show a difference between rt-PA and placebo on the treatment effect in patients with unknown onset stroke of infratentorial localization. There is a general lack of information on this subject in the literature, as very few randomized, controlled trials or phase IV studies evaluating the safety and efficacy of iv tPA in posterior circulation strokes are available (15, 16). Hence our findings, notwithstanding the small cohort size, represent knowledge novel and relevant to the field. Within the WAKE-UP study population itself, the percentage of infratentorial alteplase treated patients who reached favorable outcome was slightly higher than in the overall study cohort (54.5 vs. 53.3%) but the placebo group of infratentorial patients did remarkably well with 52% reaching favorable outcome (as opposed to only 41.8% of patients in the complete WAKE-UP population). This is not surprising as some preexisting studies have shown that up to 60% of patients with a stroke in the posterior circulation recover to the point of being able to carry out all usual duties and activities despite lack of treatment (16). This same study (16) identified a cutoff baseline NIHSS score of 5 or below as one with a high sensitivity and specificity for predicting favorable outcome in untreated patients with a posterior circulation stroke (and 75% of the placebo cohort in our current substudy had a baseline NIHSS of 5 or less). Hence, a high response rate in the placebo group of our study was to be expected, a fact which has arguably undermined the potential to detect treatment effect in some other previously conducted trials (17).

The studies involving human participants were reviewed and approved by the national competent authorities and ethics committees in all participating countries approved the study. The patients/participants provided their written informed consent to participate in this study.

Copyright © 2019 Galinovic, Boutitie, Fiebach, Villringer, Cheng, Ebinger, Endres, Fiehler, Ford, Thijs, Lemmens, Muir, Nighoghossian, Pedraza, Simonsen, Roy, Gerloff and Thomalla. This is an open-access article distributed under the terms of the Creative Commons Attribution License (CC BY). The use, distribution or reproduction in other forums is permitted, provided the original author(s) and the copyright owner(s) are credited and that the original publication in this journal is cited, in accordance with accepted academic practice. No use, distribution or reproduction is permitted which does not comply with these terms.