Background: Most previous studies have found that human intestinal microbiota affect the symptoms of autism spectrum disorder (ASD), especially gastrointestinal (GI) symptoms, but regarding this, there is limited data of non-western ethnicity. Probiotics can reconstitute the host intestinal microbiota and strengthen gastrointestinal function, however, clinical data proving the effect of probiotics treatment on ASD is lacking.

Methods: This study explored the significant differences between ASD and neurotypical (NT), and the improvement of applied behavior analysis (ABA) training in combination with probiotics, vs. ABA training only.

Conclusion: Our findings suggest that intestinal microbiota is different between the NT children and the ASD children with or without GI problems. In combination with ABA training, probiotics treatment can bring more benefit to ASD children. Clinical trials with a more rigorous design and larger sample size are indispensable for further validation.

Autism spectrum disorder (ASD) refers to a group of neurodevelopmental disorders with multiple, heterogenous causes. ASD is characterized by stereotyped behavior, language, and social interaction disorders. The incidence of ASD in children from 1.6 to 8 years old in China is approximately 39.23/10,000 (1). The etiology of ASD is complex; both heredity and the environmental are involved (2). Studies have found that human intestinal microbiota affect the human brain and may affect human behavior and mental health through the gut-brain axis (3–7). The most common non-neurological indications in children with ASD are gastrointestinal symptoms (GI) such as constipation and diarrhea (8). Many studies have shown that the intestinal microbiota of autistic children with GI is different from that of neurotypical (NT) children (9–12), and the GI in the children with ASD corrects with their autistic manifestations (13).

The ethics committee of Peking University has reviewed and approved this study. It has been registered in the Chinese Clinical Trial Registry (ChiCTR1900023609) and all patients have signed the written informed consent. A total of 114 children with ASD (diagnosed according to Diagnostic and Statistical Manual of Mental Disorders, 5th Edition) (23) were recruited from hospital pediatric departments, hospital neurodevelopmental departments, and autistic rehabilitation institutions in Beijing, Shandong, Henan, and Zhejiang. In the meantime, a total of 40 neurotypical (NT) children from regular preschools were selected as the negative control group. ASD enrollment criteria were as follows: (1) diagnosis of ASD according to DSM-V; (2) age 3–8 years old; (3) no kinship between participants; (4) no antibiotics, probiotics, or other gastrointestinal treatments within 1 month prior to enrollment. ASD exclusion criteria were as follows: (1) No diagnosis of ADHD or other non-ASD neurological peculiarity, which cause autism-like manifestations; (2) children with other mental illnesses, brain organic diseases, severe liver and kidney diseases, and cardiovascular diseases; (3) children's guardians did not give permission for participation or did not complete follow-up. NT children were selected using the following criteria: (1) age 3–8 years old, normal development; (2) no family history of ASD; (3) children's guardians agreed to participate in the study and signed informed consent; (4) no antibiotics, or other gastrointestinal treatments within 1 month before enrollment.

Thirty-seven children with ASD were treated with 4-week applied behavior analysis (ABA) training in combination with probiotics. Probiotics are lyophilized, water-soluble powder that contains 6 strains of bacteria; each strain has 1 billion CFU/gram. The dosage is 6 g per day (36 billion CFU in total). Twenty-eight other children with ASD were randomly selected as a control group and treated with ABA training alone. During the study, both groups were prohibited from the use of antibiotics, other probiotics, prebiotics, or any other treatment that might alter the intestinal microbiota.

Evaluation of ASD-Related and Gastrointestinal Symptoms

Wilcoxon signed-rank test, paired wilcoxon test, and Kruskal-Wallis test analysis were performed using R [http://cran.r-project.org/]. All p-values reported in the study were from two-tailed tests and p-values lower than 0.05 were accepted as significant in clinical data analysis. All p-values for bacterial microbiome analyses were corrected using the Benjamini-Hochberg false discovery rate (FDR) correction, and the resulting corrected values were referred to as q-values. q-values lower than 0.05 were accepted as significant. 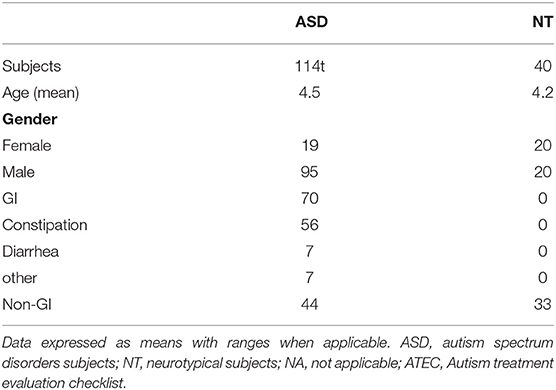 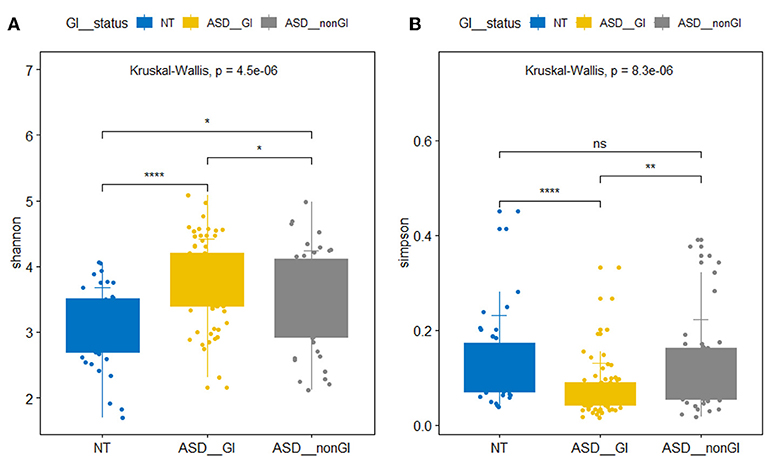 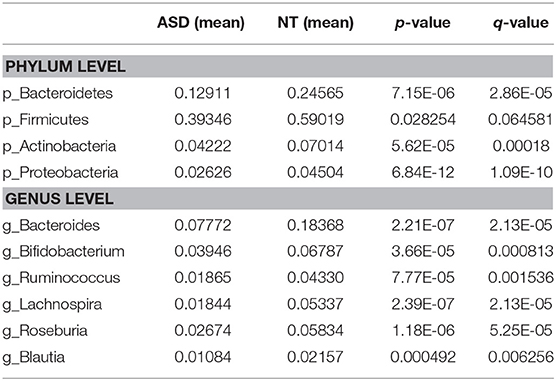 Table 2. Bacterial abundance at the level of phylum and genus in ASD and NT groups (Wilcoxon rank test p-value and q-value < 0.05).

We conducted a 4-week ABA training program in combination with probiotics treatment for 37 children with ASD, among whom 22 had GI events and 15 did not. Our results indicate that probiotics treatment, when applied in combination with ABA training, can alleviate the symptoms in both ASD children with and without GI illness. In 83.8% of ASD children, the ATEC total scores decreased by 8.1 points in average. Scores for Speech/Language Communication, Sociability, Sensory/Cognitive Awareness and Health/Physical/Behavior also significantly decreased. Among them, Health/Physical/Behavior scores declined the most. 86.7% (13/15) of ASD children without GI events showed improvement in ATEC scores. Their average ATEC score dropped from 59.3 to 50.2. The rate of improvement in ATEC score for children with ASD and GI abnormalities was 78.9% (17/22), and their average decrease in ATEC score was from 73.2 to 62.9. The rate of improvement in the ASD group without GI events was higher than that in the ASD group with GI abnormalities. ATEC scores showed no significant change in the control group (Table 3). Our results indicate that autistic children without GI symptoms are sensitive to probiotics treatment.

Table 3. Changes in ATEC and GI scores before and after 4-week probiotics treatment.

A gastrointestinal questionnaire was used to evaluate the ASD group with GI symptoms. In the treatment group, 19 out of 22 (86.4%) children have their GI score decreased. The mean GI score in the 19 cases decreased from 2.26 to 0.84. Scores in 3 cases remained unchanged. No significant improvements in GI score were found in the 11 children in the control group (Table 3).

During probiotics treatment, 2 patients developed diarrhea (2/37) 1 week after taking probiotics; the adverse reactions disappeared after the third week of continuous use. This may be because of the Jarisch-Herxheimer die-off reaction. No serious adverse reactions such as infection or exacerbation of symptoms occurred during the study. This demonstrates that a dosage of 30–40 billion CFU per day is suitable in this study.

Previous studies did not include participants of non-Western ethnicities and concentrated on ASD children with GI events. In this study, we recruited ASD children with and without GI symptoms from multiple centers in China. In this way, our research has a wide sample and better represents children with ASD. The ratio of male to female in our recruits was 1:1 in the NT group and 5:1 in the ASD group. The reason we think is that the incidence of ASD in boys is higher than girls, Early studies showed that autism affects 4–5 times more males than females (25). Our results indicate that there is a significant difference in the intestinal microbiota between ASD children and NT children regardless of their gastrointestinal problems. The abundance of beneficial bacteria in children with ASD was here found to be significantly lower than in non-ASD children. The abundance of Bacteroidetes in the ASD group was significantly lower than in the NT group, while the ratio of Firmicutes abundance to Bacteroidetes abundance was significantly higher than in the NT group. This suggests that although some ASD children do not exhibit gastrointestinal problems, their intestinal microbiota are, nonetheless, significantly different from those of non-ASD individuals.

The strengths of our study are obvious. First of all, it is a multi-center clinical study of Chinese children. Secondly, the specimens we collected were children's feces, and there were no invasive and injurious operations on children. Thirdly, our findings include the results of probiotic intervention in some children. However, our study also has a few limitations. Our sample size is small, the duration of probiotics treatment was relatively short, and the study was not blinded. Future studies should be performed with larger sample sizes, longer treatment time, longer follow-up time, and more assessment parameters. Our research can be blinded by giving the ABA only group a pill placebo instead of a probiotic.

Intestinal microbiota is different between the normal children and the ASD children with or without GI. Probiotics treatment can reduce the magnitude ASD-related and gastrointestinal symptoms. In combination with ABA training, probiotics treatment can bring benefits to ASD children with and without GI. Clinical trials with a more rigorous design and larger sample size are needed for validation.

Publicly available datasets were analyzed in this study. This data can be found here: http://www.chictr.org.cn.

The studies involving human participants were reviewed and approved by Ethics Committee for Biomedical Research, First Hospital of Peking University. Written informed consent to participate in this study was provided by the participants' legal guardian/next of kin.

YH: full access to all the data in the study and takes responsibility for the integrity of the data and the accuracy of the data analysis. MN, YH, SZ, and QL: concept and design. All authors: acquisition, analysis, or interpretation of data and critical revision of the manuscript for important intellectual content. MN and YH: drafting of the manuscript. MN and SZ: statistical analysis. YH: obtained funding. JZ, FW, WD, GD, HL, WR, PY, CG, HT, XG, and SZ: administrative, technical, or material support.

This study was supported by Beijing Natural Science Foundation (S170003). This work was also supported by National Key Research and Development Program of China (No. 2016YFC1306201) and Beijing Key Laboratory of Molecular Diagnosis and Study on Pediatric Genetic Diseases (No. Z0317).

Copyright © 2019 Niu, Li, Zhang, Wen, Dang, Duan, Li, Ruan, Yang, Guan, Tian, Gao, Zhang, Yuan and Han. This is an open-access article distributed under the terms of the Creative Commons Attribution License (CC BY). The use, distribution or reproduction in other forums is permitted, provided the original author(s) and the copyright owner(s) are credited and that the original publication in this journal is cited, in accordance with accepted academic practice. No use, distribution or reproduction is permitted which does not comply with these terms.